Mountains in South Africa have been engulfed by a grass fire, leaving bright orange flames towering over the Cape Town skyline.

Residents at the foot of the 1,150-ft Signal Hill mountain have evacuated their homes while strong winds fanned the flames towards nearby 2,195-ft Lion’s Head.

Volunteer Wildlife Service said the city’s Table Mountain was not initially affected as the wind blew the flames away from the landmark peak, but later said the fire had spread towards the national park of the same name. 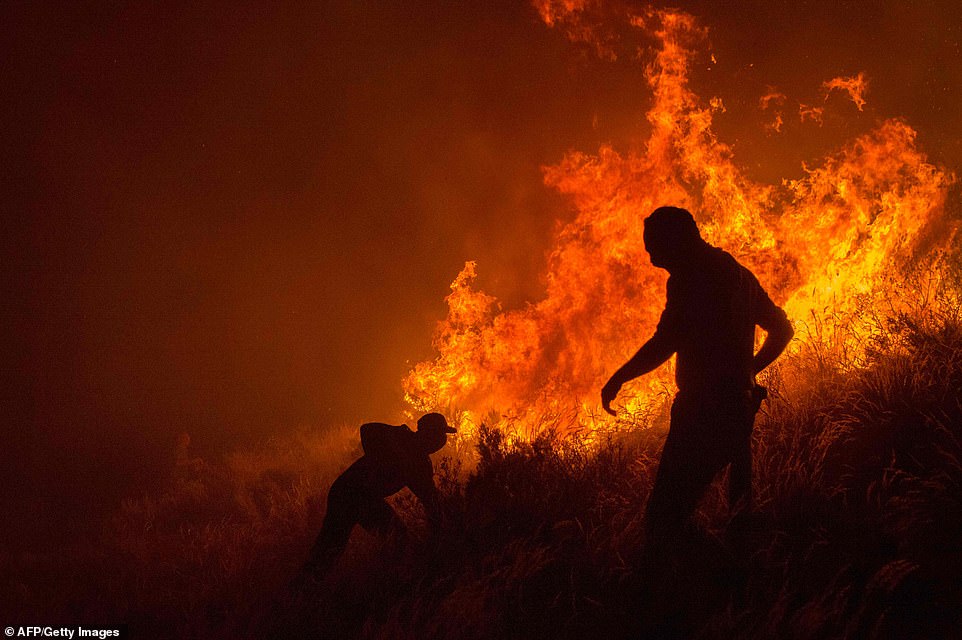 Silhouettes: Volunteers and local residents use wet towels to fight one front of a large brush fire that started around the mountains in the city centre of Cape Town, leading residents at the foot of the peaks to evacuate their homes 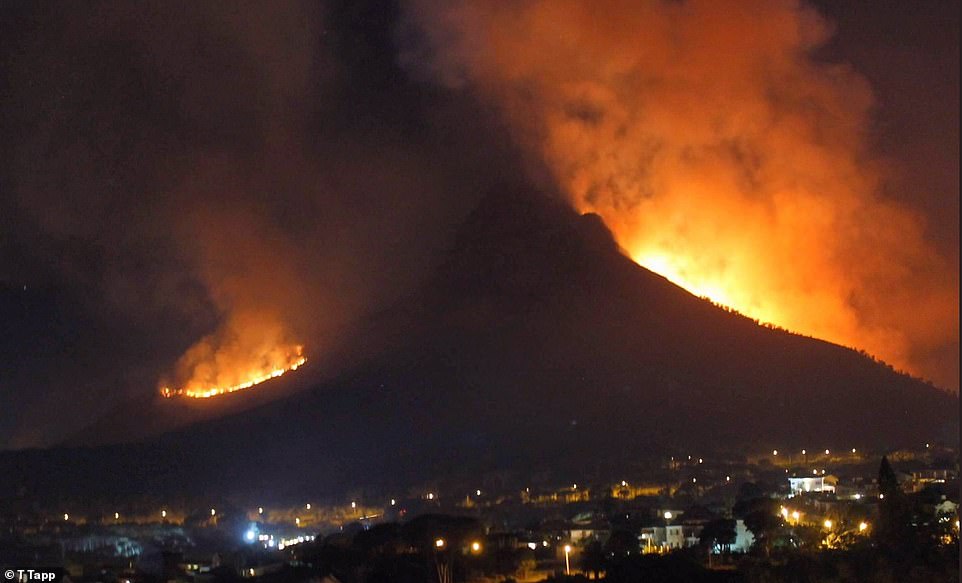 Engulfed: The skyline over Cape Town is filled with bright orange flames as strong winds blew the fire from Signal Hill to nearby Lion’s Head, with reports the blaze was heading towards Table Mountain 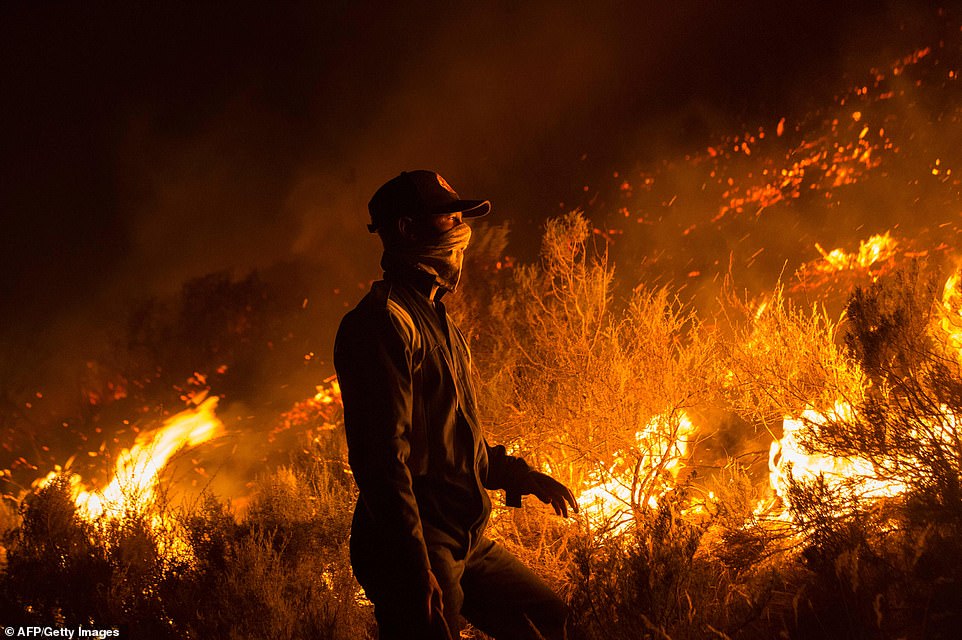 Protection: A man wears a mask and hat as he examines the fire in Cape Town which has been fanned by strong winds 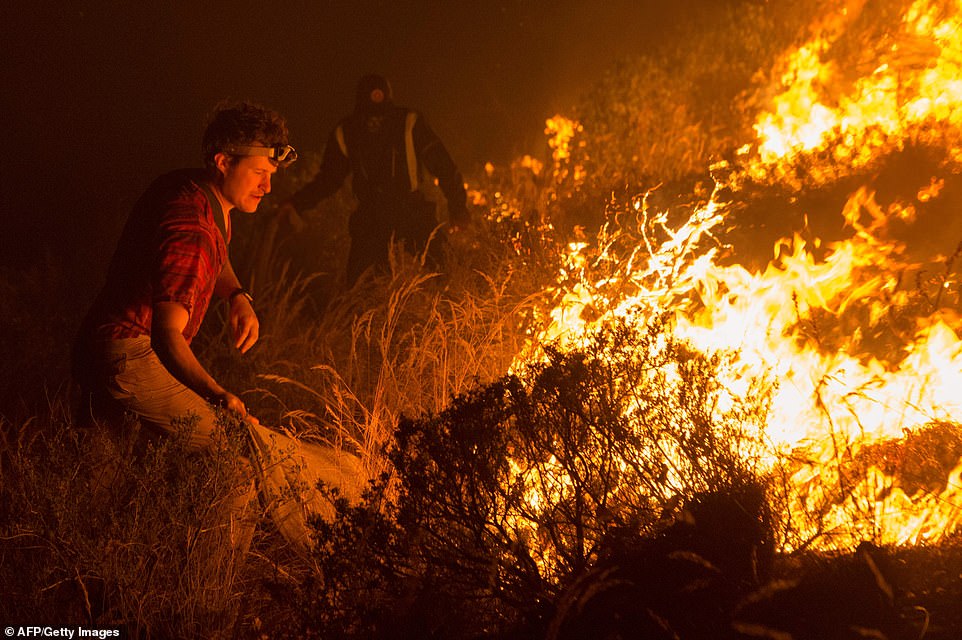 Containment: A local resident uses a wet towel in an attempt to douse the flames which spread across Cape Town’s mountains amid strong winds at the south-western tip of South Africa 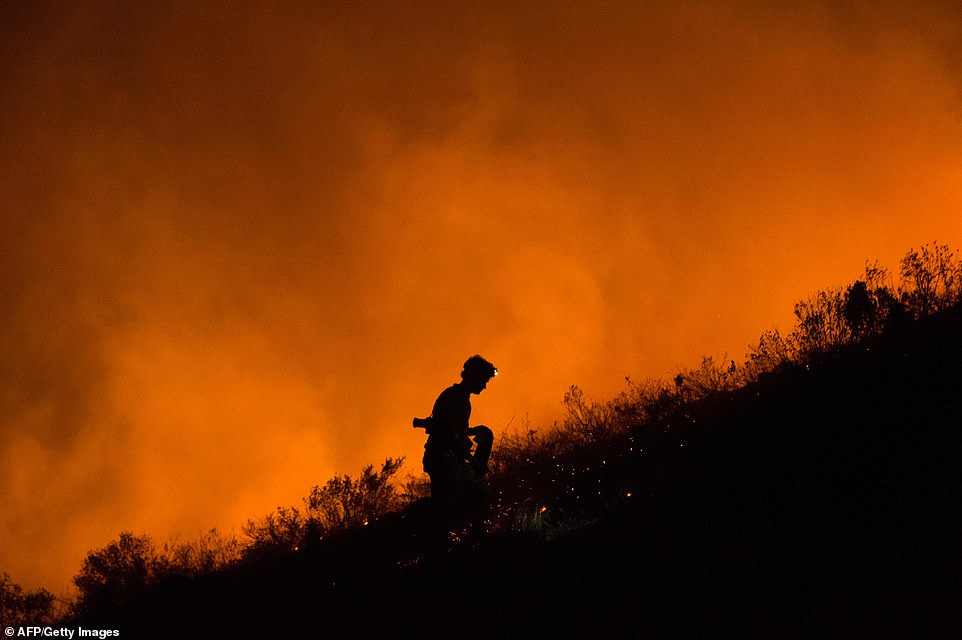 Lonely: A local resident climbs one of the hills in Cape Town as the skyline is lit up by the bright orange of the flames 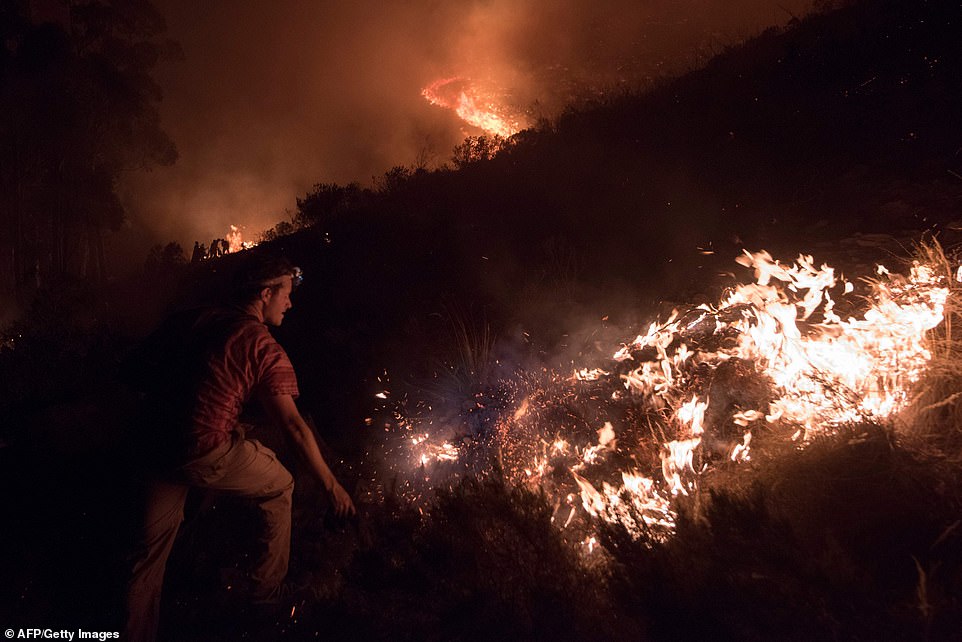 Battle against the blaze: Volunteers and local residents use wet towels to fight one front of a large brush fire that started around the mountains in the city centre

The wildfire volunteers also called on the public to donate water, food and sun cream to the firefighters tackling the blaze.

‘It’s best for everyone, except for firefighters and emergency services, not to be up on the mountains tonight,’ the organisation said on Twitter.

‘The fire is still not under control and the strong, gusting winds are making it difficult for the various crews on the ground,’ they said on Sunday evening.

By late on Sunday there were at least 20 fire engines on the scene with more than 100 firefighters battling the blaze, according to The South African. 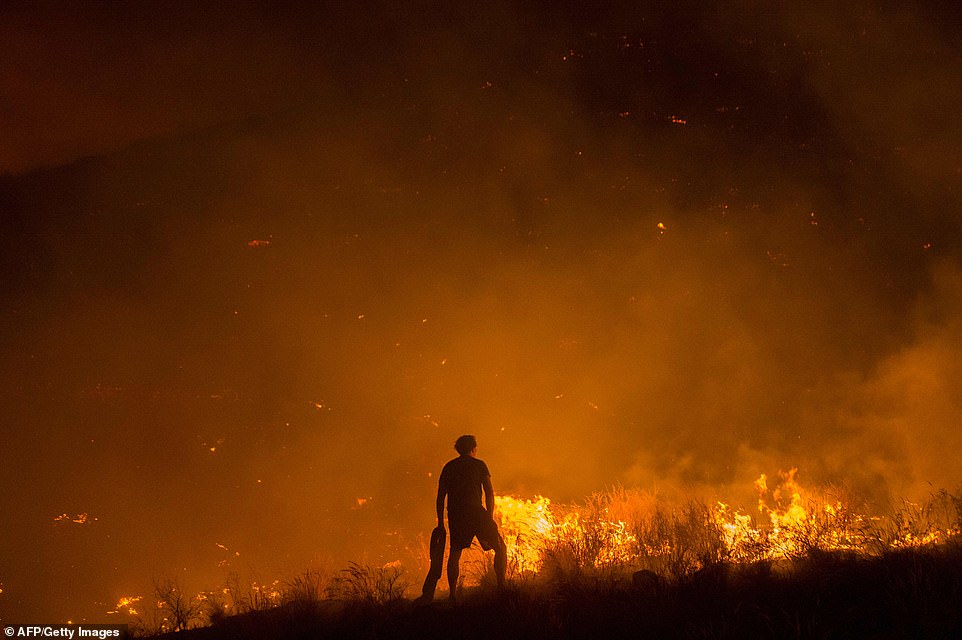 Lit up: A man looks on as he helps to fight the mountain fires in South Africa which have started to spread towards Table Mountain national park, according to the Volunteer Wildfire Services 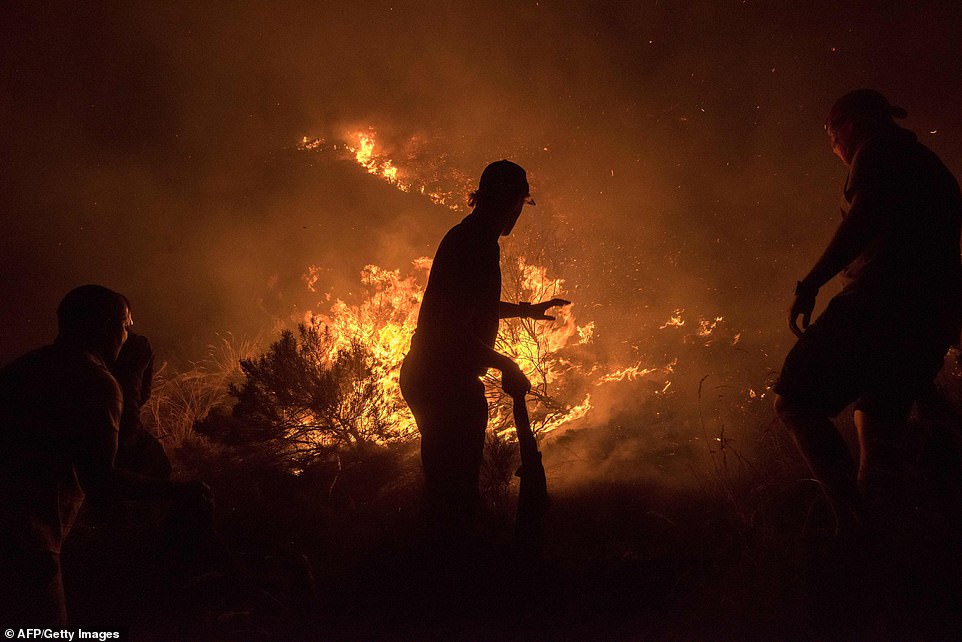 Light and dark: People watch the flames spread on the mountainside as strong winds fanned the fires in Cape Town yesterday 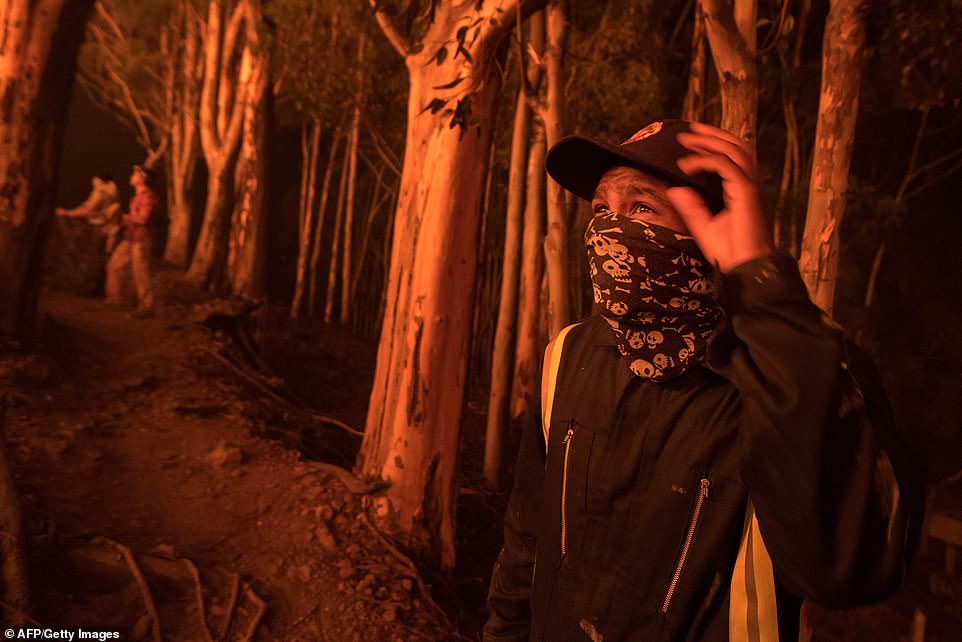 Blinding light: A man wears a hat and protects his face with a mask as the fire burns on the mountains in Cape Town on Sunday 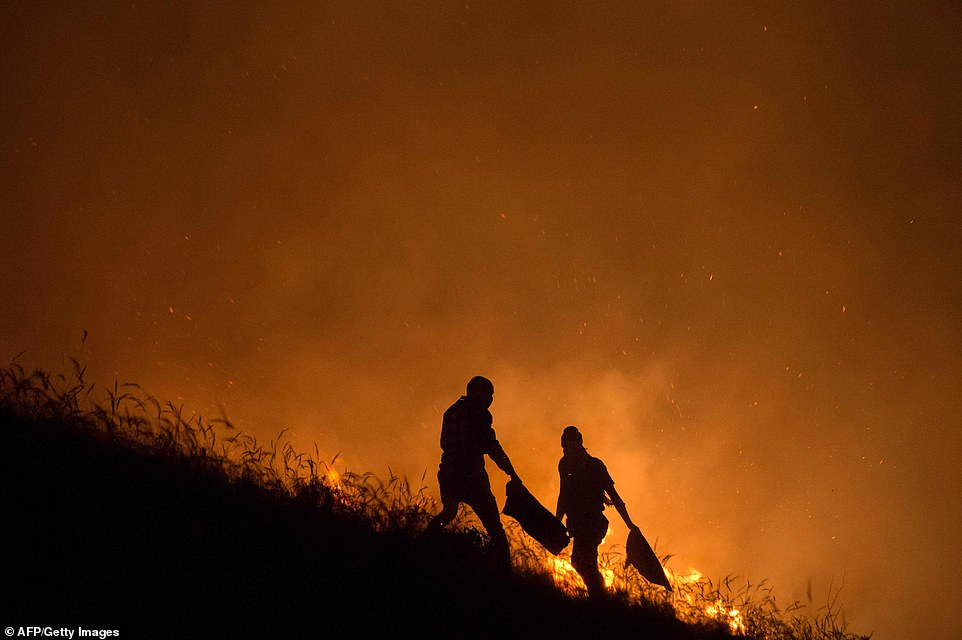 Fighting the flames: Cape Town volunteers hold wet towels near the large brush fire that started around the mountains in the city centre 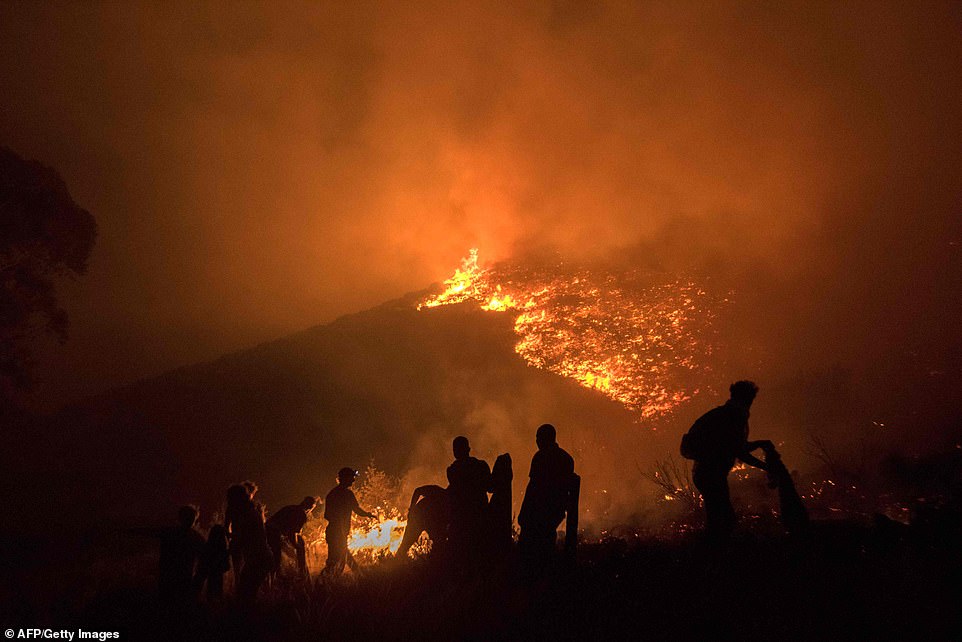 Teaming up: Volunteers and Cape Town residents get to work battling the flames which spread across the mountain peaks