She crowed Amber and Greg the winners of Love Island 2019 on Monday – and Caroline Flack gave Love Island fans a glimpse inside the Love Island afterparty on social media later that evening.

She shared pictures of herself with runner-up Tommy Fury, 20, who whipped off his shirt and sipped on his favourite tipple, rosé, saying; ‘I’ve got the belly out, I’ve got the wine,’ although his girlfriend Molly-Mae was not pictured with them.

The TV presenter, 39, shared sweet selfies of herself cuddling up to basketball player, Ovie Soko, 28, who came third alongside India Reynolds, also 28, with Caroline declaring that her life was ‘now complete.’ 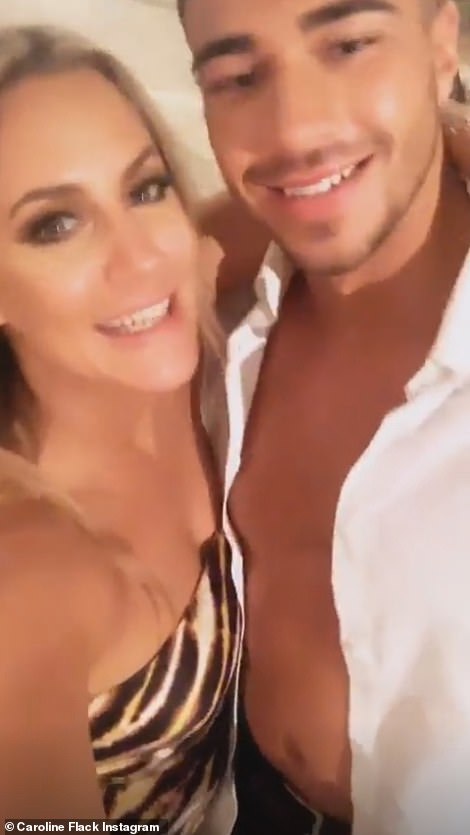 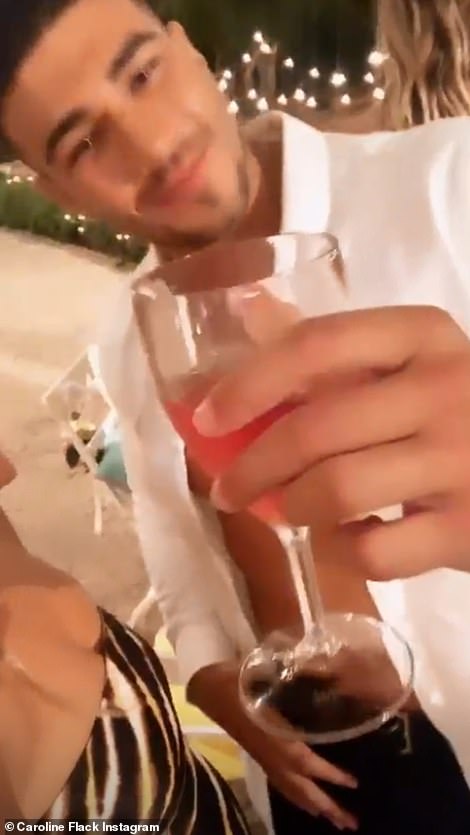 Inside the Love Island afterparty: I’ve got the belly out, I’ve got the wine’: Tommy Fury whipped off his shirt at very boozy bash as he downed his favourite rosé wine tipple alongside the show’s host on Monday night

Caroline showed off an incredible height difference as the diminutive presenter stood next to the 6 ft 7 basketball player.

Ovie and Caroline were both beaming from ear to ear as they wrapped their arms around each other and worked their magic for the camera together.

And she wasn’t the only one muscling in on the action as model Ashley James was also at the party and couldn’t resist getting a snap with Ovie for social media. 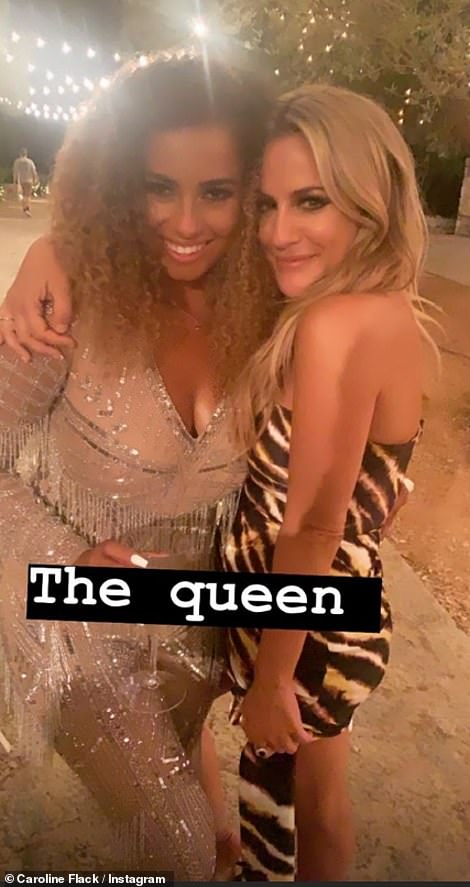 ‘My life is complete!’ Caroline Flack posed for a cosy snap with Ovie Soko, who won the heart of the nation, despite coming in third place with India Reynolds and winner Amber (right) 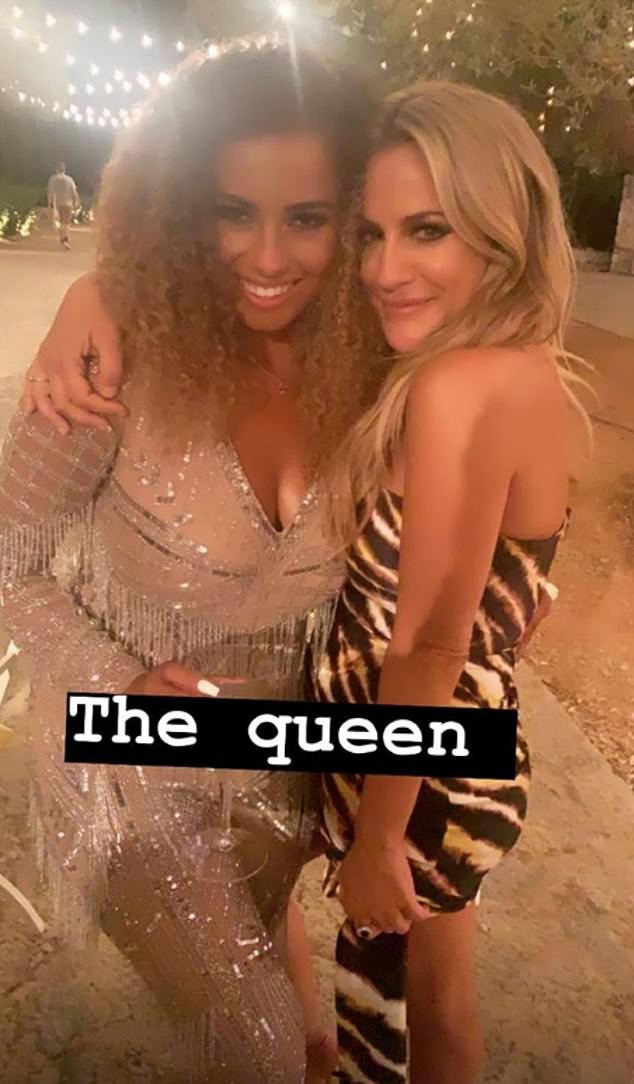 Buy the skirt at NET-A-PORTER

But stylist Nisha Grewal most definitely saved the very best for last – a custom made House of Holland number for the show’s grand finale!

Between the bandeau neckline and statement tie dye-style animal stripe print, this dress has got Caroline’s name written all over it. The mini length shows off her incredible legs, and the little tie detail on one side was a nice touch.

If you’re a big fan of the print (Kylie Jenner has worn the blazer too!) then click through to buy the skirt now at NET-A-PORTER.

Or knock their socks off in one of the similar options from our edit below instead, starting with this PrettyLittleThing bargain. 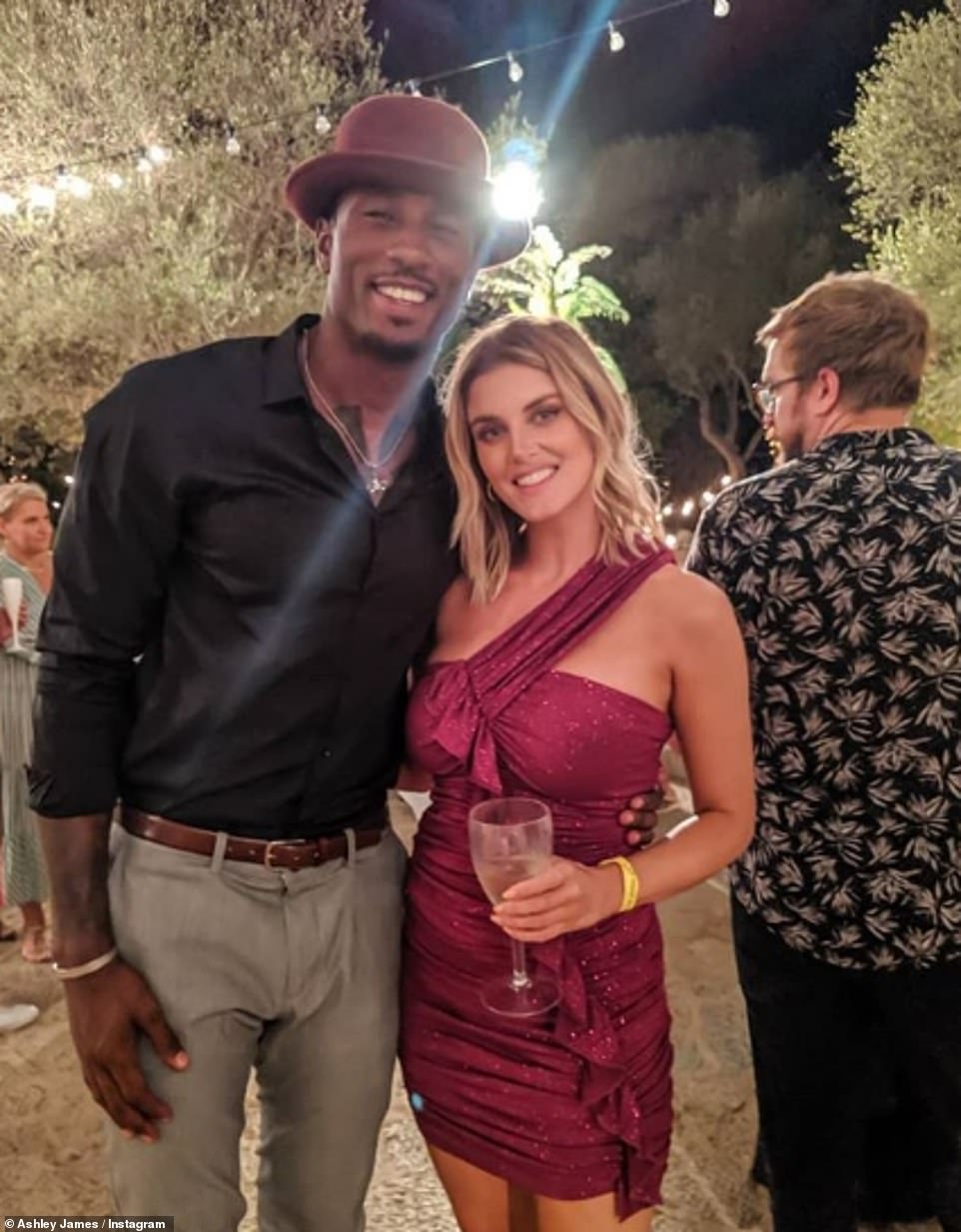 Friends in high places: Ashley James was also at the party and had a picture taken with Ovie 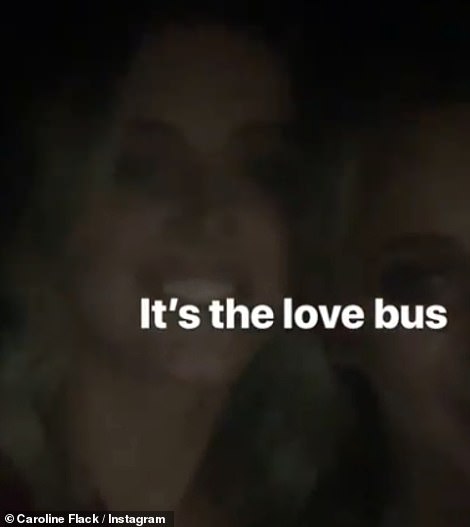 Spot them: Ashley and Caroline were pictured aboard the ‘love bus’ as they headed back to their villa afterwards

Elsewhere, Caroline caught up with 2019 winner Amber, who Caroline lauded as a ‘queen’ in the caption for the sweet social media snap.

She and Ashley were later driven back to their respective villas before heading back to the UK, with Caroline sharing a dark clip of them on her Instagram stories, writing: ‘It’s the love bus.’

In the images Caroline and the Islanders appeared to be stood outside the villa, as the Islanders enjoyed their first night off camera for eight weeks.

During a short clip on her Instagram Caroline asked runner-up Tommy how he was feeling, to which he replied he was ‘electric’ and ‘excited’.

During the dramatic final episode, Amber and Greg won Love Island 2019, splitting the £50,000 prize money between them.

The couple – who got together just two weeks ago – beat Tommy and Molly-Mae, who had been seeing one another for 54 days.

After announcing the winners, host of the show Caroline Flack asked beautician Amber and rugby hunk Greg to choose an envelope each – one containing the £50k prize fund, the other containing nothing.

Greg selected the money and after a moment of brief tension announced he’d be splitting it with Amber.

Earlier in the live final, Curtis and Maura were the first couple to be axed on ITV2 live Monday night – leaving them in fourth place.

They were followed swiftly by Ovie and India, who placed third. 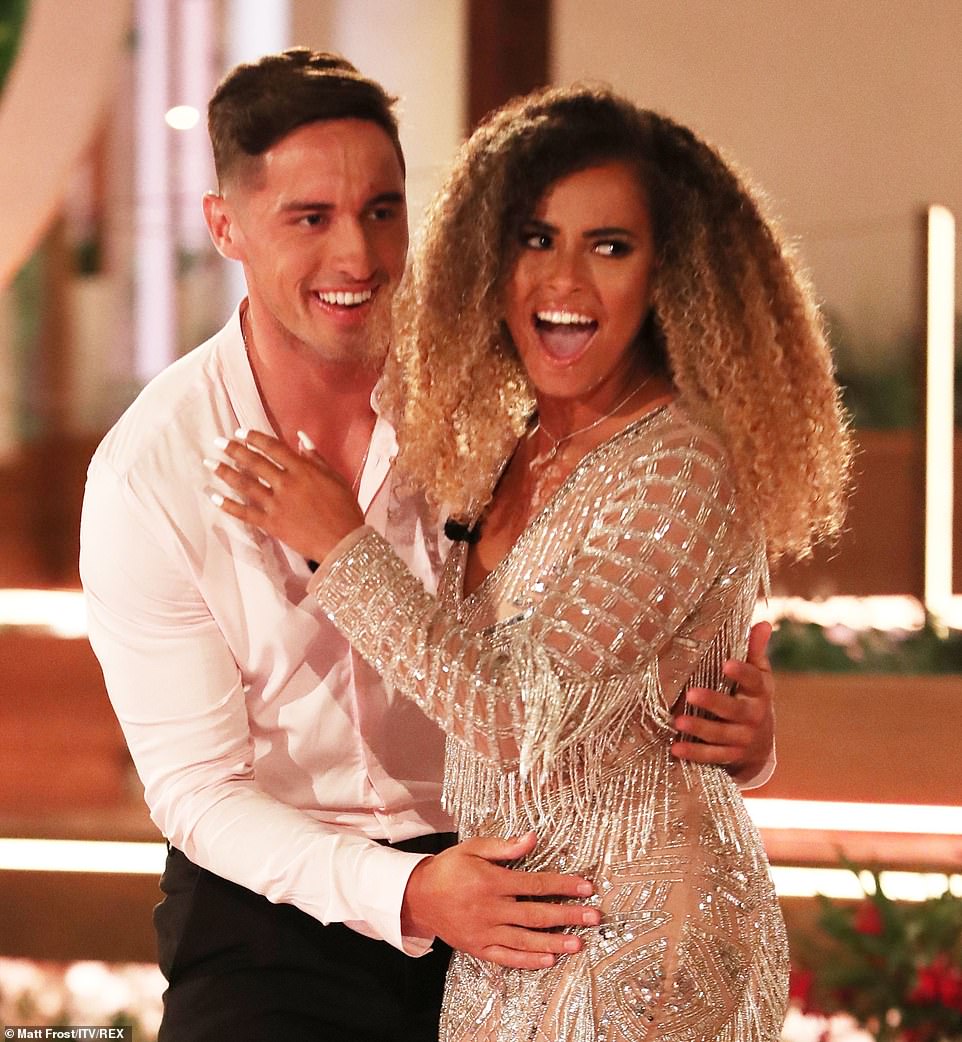 Love wins! During the dramatic final episode, Amber and Greg won Love Island 2019, splitting the £50,000 prize money between them Gutted: Amber and Greg – who got together just two weeks ago – beat Tommy and Molly-Mae, who had been seeing one another for 54 days