A celebrity chef who starred on the BBC‘s Great British Menu has pleaded guilty to assaulting his wife in a Wetherspoon pub despite his partner begging police not to put him in dock.

Mark Poynton, 38, appeared in court today to admit the attack on Shauna McGuinness at the Regal in Cambridge on January 3 this year.

The star chef, whose food was praised on the BBC show in 2014 by Michelin-starred Marcus Wareing, had worked at Alimentum in Cambridge restaurant – but had left last June and it closed for good in October.

He was prosecuted despite his wife Ms McGuinness pleading not to take the case to court, insisting she ‘was not a victim of domestic abuse’.

The court heard the couple had been out drinking together to discuss their marriage after Poynton found out his wife had been having an affair with a doctor.

CCTV from the Regal pub showed the defendant pushing his wife twice, once when she was seated on a stool, which he kicked, and another time in the back as the pair were leaving, it was said.

Ms McGuinness was not injured and had hit her husband in the ribs in a bar before the incident, Huntingdon Magistrates’ Court heard today. 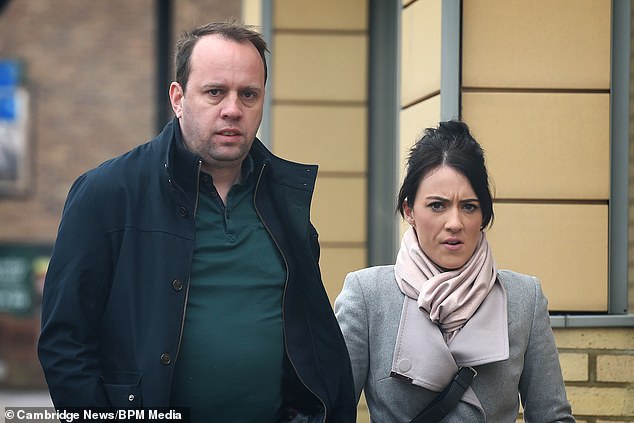 Great British Menu chef Mark Poynton, 38, appeared in court today to admit assaulting his wife Shauna McGuinness (pictured together today) at a pub in Cambridge on January 3 this year 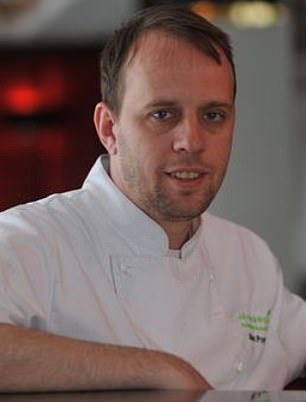 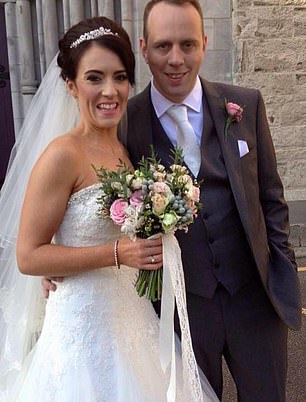 Poynton (left) was prosecuted despite his wife Shauna McGuinness (together right) pleading with police not to take the case to court, insisting she ‘was not a victim of domestic abuse’ 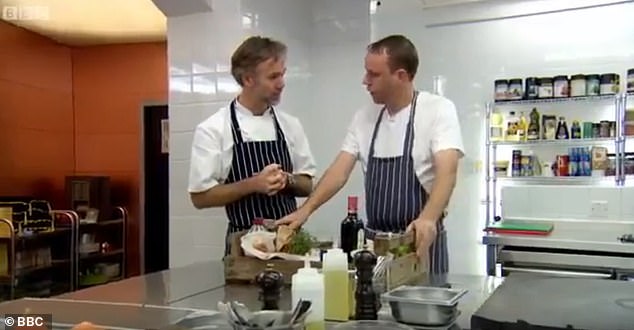 Poynton, 38, is pictured with Marcus Wareing on the BBC’s Great British Menu show

The former Alimentum head chef previously pleaded not guilty but today admitted the assault and was sentenced to a three-month conditional discharge. He was also ordered to pay £85 in costs at Huntingdon Magistrates’ Court.

CCTV of the attack was shown to the court, with Poynton seen twice pushing his wife, once when she was sat on a stool and again in the back as the pair were leaving the pub.

Mark Poynton’s defence lawyer Gillian McGivern said: ‘The fact is Mr Poynton was a man of impeccable good character. It is absolutely right to say you should know this case has turned both his and his wife’s life upside down.

‘She is at the back of the court today and was two weeks ago. There were private issues in their marriage. I made mention of the fact this is the second appearance. When he appeared the case was adjourned because he was a man of impeccable character.

‘She tried everything she can to persuade police that she did not support prosecution. She spoke to previous prosecution at length. I do with the greatest respect draw that aspect to this case.

‘She has been made to feel the victim and will continue to feel that hereafter. She has sent an email to the Crown and has raised many issues.

‘Her world crumbled around her. She said she pleaded with officers and at the time she was not the victim.’

The court heard the couple had been out drinking together to discuss their marriage because they were having issues, after Poynton found out his wife (pictured) had been having an affair with a doctor

‘She said she is not a victim of domestic abuse. She goes on to stress this matter. She confirms they were upset on the night in question. She said her husband pushed her but not with the intention to hurt her. Her husband was very remorseful for his actions and is not a threat to her or anyone else’s well-being.

‘She went to explain it had been a very difficult year for her husband’s business and how that can add to this situation.

‘Before the guilty plea put in today, Mr Poynton was a man of impeccable character.

‘The charitable work he has done would take up too much time for me to mention than this court has today.

‘He has done a huge amount of charity work in this country along with other celebrity chefs.

‘He left his last very high profile job some months ago.

‘He has a number of business ventures in hand which will come into venture in the next few months.

The magistrate said: ‘Don’t let it happen again, I am sure it won’t.’

Poynton was given a three-months conditional discharge and ordered to pay £85 in court costs.

A statement from Mark Poynton and Shauna McGuinness said: ‘I think the sentencing given today outlines the fact this case did not need to be brought to court and the fact the (magistrate) even described it as ‘a minor assault, if it could even be called an assault at all’ shows that.’

Sajid Javid backs Boris Johnson in Tory leadership race
Immigrants to Britain must follow the UK's values, Sajid Javid demands
Six people are killed in rail crash during a storm in Denmark
Vatican spokesman and his deputy both QUIT weeks after Pope appointed friend as 'editorial director'
Winx is headed for a record fourth consecutive Cox Plate victory as rumours of retirement swirl
Mother, 23, tricked grandfather into admitting he sexually abused her as a child as he is jailed
Virgin Media goes DOWN: Thousands of broadband users across the UK are unable to get online
We can't hit our target to install smart meters in every home