Celebrity reaction to the Supreme Court confirmation hearing for Brett Kavanaugh before the Senate Judiciary Committee:

“These men are wholly uninterested and unmoved by this woman’s words…Dr. Ford has to talk about the worst trauma of her life in front of them. This is the reality of being survivor of sexual assault in this country. #WeBelieveDrFord #WeBelieveSurvivors #metooMVMT” – founder of the MeToo movement, Tarana Burke, via Twitter.

“I do NOT know how I got home after I was raped at 15. No memory of it. Neither does she. #ChristinaBlaseyFord” – actress Ashley Judd, via Twitter.

“#IfOnly I could save you. #IfOnly I could help you remove that weight from your tired shoulders and become the joy of an unburdened you. My prayer for all survivors of sexual assault. #MeToo” – actress Alyssa Milano, later tweeting from inside the hearing: “I believe Dr. Christine Blasey Ford.”

“The Democrats will do anything in their power to win no matter what, this time you’ve lost and will keep losing, the American people are a lot smarter than you are, we can see the truth and nothing but the truth, so help me God. #ConfirmJudgeKavanaughNow.”- actor and Congressional candidate Antonio Sabato Jr.

“Guess when you have everything to lose, you gotta cry your way thru your testimony for effect. Funny, if #DrFord had done that, they’d call her extremely emotional. But #Kavanagh’s tears are cuz he’s passionate. ????#TeamDl #KanavaughHearings” – comedian DL Hughley, via Twitter. 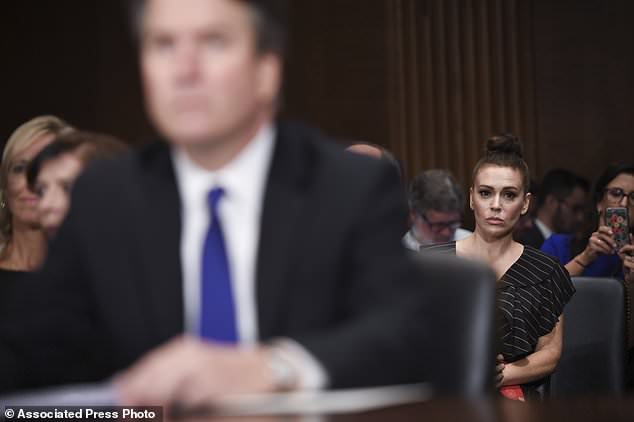 “Today’s hearing reminds us that to really tell a woman’s story, one must begin with a 15-minute preamble from an elderly man about why her story is suspicious. #KavanaughHearings” – TV personality-comedian Samantha Bee, via Twitter.

“Dr. Ford, I am in awe of your bravery.” – TV personality Ellen DeGeneres, via Twitter.

“Deepest gratitude to you #DrChristineBlaseyFord You told us that you are ‘terrified’ – but today you embody courage.” – actress Mia Farrow, via Twitter.

“I’m no psychology professor but it does seem weird to me that someone could have a selective fear of flying. Can’t do it to testify but for vacation, well it’s not a problem at all.” – Donald Trump Jr., via Twitter.

“Anger over accusations is not evidence of truthfulness.” – filmmaker Alex Gibney, via Twitter.

“Been following the hearings on the radio. I don’t know how Brett Kavanaugh looks, but he sounds like a boy who didn’t get the PlayStation Santa promised him for Christmas.” – writer Jennifer Weiner, via Twitter.

“Sending strength and courage and self-care to survivors today, as I carry you and your stories in my heart.” – actress Mariska Hargitay, whose character on “Law and Order: SVU” investigates sex crimes, via Twitter.

“Sickened that our current political environment is so toxic and partisan, that #DrChristineBlaseyFord received death threats for doing, what she believes, is her civic duty.” – Chaz Bono, via Twitter.

“#tbt This is me at 14. The age I was raped. It’s taken me 25 years to say those words. I wrote about it in my book. I finally told my parents and sister about it 4 months ago. Today is the day we are silent no more. All of us. I’m scared to post this. I can’t imagine what Dr. Ford is feeling right now.” – actress Busy Philipps, accompanied by an old photo of herself, on Instagram.

“Out of the blue, a hero steps up and I’m in awe. I know the pain of these kinds of memories, Dr. Ford. Memories that are indelibly imprinted on your brain no matter how many years go by. I, like millions of women across America, are behind you and thank you profoundly.” – actress Sally Field, via Twitter.

“I find Dr. Blasey Ford extremely credible and sympathetic. I find her responses echo many of the feelings and reactions I have had over the years connected to my own sexual violence trauma and the aftermath of speaking out. I applaud her courage.” – actress and sexual violence survivor Mira Sorvino, via Twitter. 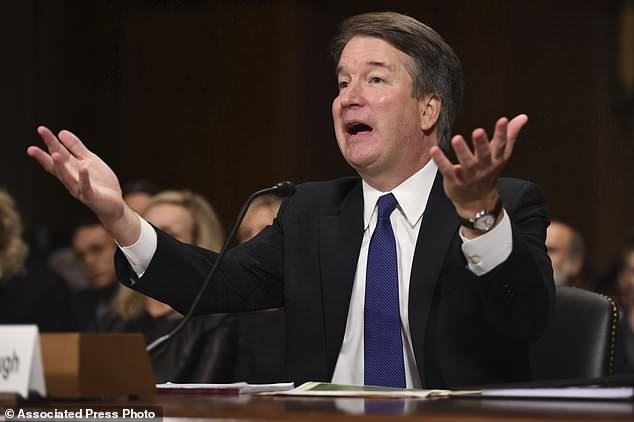