The boss of a chemicals firm has revealed the impact of Brexit-related uncertainty on her business as she blasted Jacob Rees-Mogg for misleading the public and warned of a ‘catastrophic’ no-deal.

Dani Loughran, the managing director of Aston Chemicals in Aylesbury, Buckinghamshire, gave a passionate speech on Question Time last night about the ‘massive headache’ caused by the looming threat of red tape and increased costs.

Speaking to MailOnline today, she said she had already been forced to ship products directly to warehouses in Europe, bypassing the UK, in order to prepare for a potential no-deal on March 29. 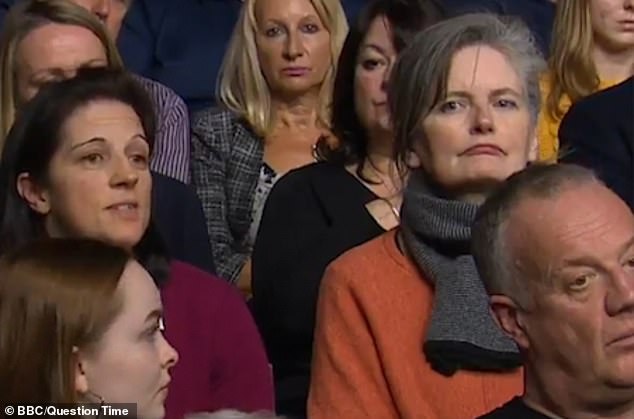 Dani Loughran, (left) the managing director of Aston Chemicals in Aylesbury, Buckinghamshire, gave a passionate speech on Question Time in the town last night about the ‘massive headache’ caused by Brexit

Addressing the Question Time panel, which included Mr Rees-Mogg and Labour’s Lisa Nandy, Dr Loughran, 48, said she believed businesses were no longer being listened to by politicians.

‘Over the past 30 years we’ve grown from nothing to a medium-sized company employing people here, bringing products from around the world and selling them in the UK and in Europe,’ she said.

‘Because of the trade that are being put up by Brexit, the duplicated regulations, and the massively increased costs we are now having to bypass the UK for half of our business.

‘I don’t want to do this, I want to employ people in the UK, pay UK taxes and support UK services, but because of people like the ERG [European Research Group]and their hardline Brexiteer stance I’m having to do this.’

Dr Loughran, a mother-of-three who was brought up by a single parent in Aylesbury and went to state school before studying biochemistry at Oxford University, insisted other UK companies were in a similar position.

‘We are all going to lose employment, taxes and our underfunded and overstretched public services are going to suffer.

‘And when that happens it’s not going to be the Rees-Moggs and the Johnsons that are going to suffer, it’s going to be us – the working people of the UK.

‘Any Brexit deal is going to be worse than what we’ve got. The worst case scenario is a no-deal Brexit, which would be absolutely catastrophic.

‘But the Brexiteers just don’t seem to care, or don’t know actually what they are trying to do.’

Her comments were met with applause from many in the audience, while some cheered. 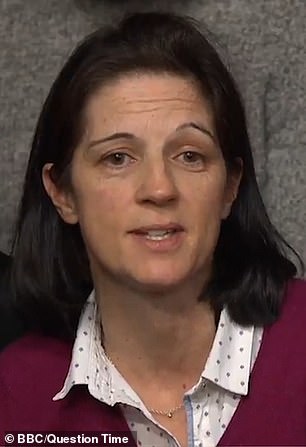 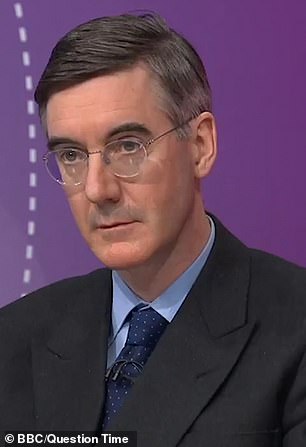 Mr Rees-Mogg replied to Dr Loughton by saying the boss of the chemical giant Ineos Jim Ratcliffe had supported Brexit and criticised EU for ‘foolish’ taxes.

He also used his Question Time appearance at Aylesbury’s Waterside Theatre to defend the ERG – the main pro-Brexit association of Tory MPs – and insist he was only trying to deliver on the result of the referendum.

‘We’re sticking up for what people voted for. Fundamentally I believe you trust the people and deliver on referendum results,’ he said.

But Dr Loughran, whose firm imports and exports chemicals for the European personal care industry, told MailOnline today she believed Mr Rees-Mogg was deliberately avoiding the negative consequences of his hard-Brexit stance.

‘Jacob Rees-Mogg is clever and educated, he must know what he is saying is not going to work,’ she said.

‘It is working people, and vulnerable people, who need public services that are going to suffer.

‘I’m not a fat cat – business is very important and I can’t understand why everyone is ignoring us.

‘Because as soon as business declines you’ll have less to spend on public services and welfare.’ 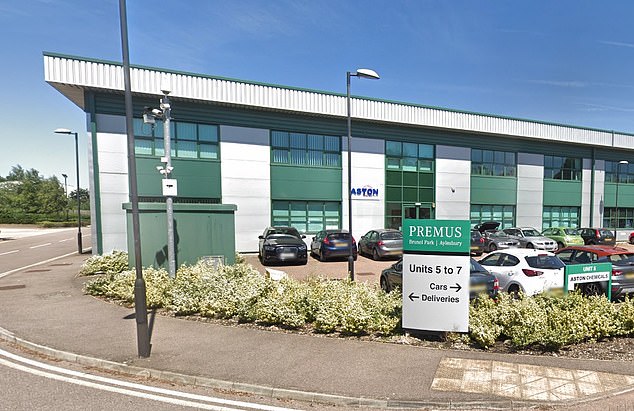 Dr Loughran, whose husband was in the RAF, claimed a second referendum could be the solution to the current impasse.

‘A lot of people voted leave for reasons that they later realised were not true – such as the £350million for the NHS.

‘Those people immediately realised their vote would not give them what they wanted.

‘They are saying that they didn’t realise this. I think if there was a second referendum the outcome would probably be different if it was done without the lies.’

The idea of holding a second referendum was proposed on Question Time last night by Wikipedia founder Jimmy Wales.

This sparked an angry reaction from some in the audience, with one many insisting that people had to ‘accept the referendum result’.

He said: ‘If you have another one it might be just as close but the other way. Then where are we? Back to square one.

‘We have already had a referendum and a general election where both major parties stood on a manifesto where they said we would leave the European Union.

‘You have got to accept it, even if you don’t agree with it.’

Prince Andrew wishes Princess Beatrice a 'happy birthday' as she turns 31
Lance Corporal who accidentally shot best friend dead had been seen 'posing with gun like a rapper'
Palestinians agree ceasefire with Israel to end deadly escalation in violence
Puzzles that Line of Duty fans will have to wait for the NEXT series to answer
MI6 bosses appeal to Donald Trump not to publish top secret documents relating to the Mueller probe
Perth mother who stole over $1.1 million from business banned from providing financial services
Climate Change chief John Gummer faces calls to quit over payments from 'green businesses'
Labour's £400billion spending splurge would be IMPOSSIBLE, warns IFS