An eight-year-old boy has died after ‘being pushed’ from a platform in front of an incoming train at Frankfurt’s main station, shortly before 10 this morning.

Frankfurt police tweeted that they believe a man pushed the child onto the track.

They said that one person was arrested and they are investigating whether he was the perpetrator. 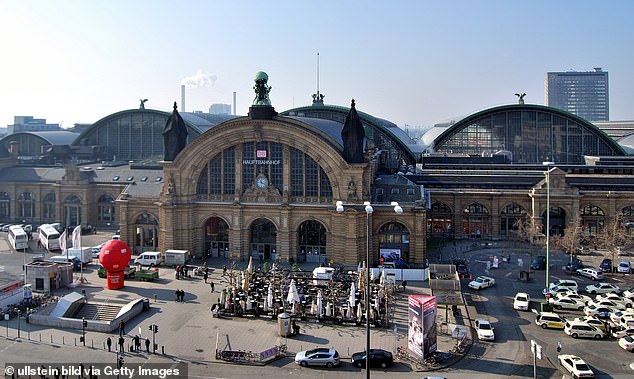 An eight-year-old boy has died after ‘being pushed’ from a platform in front of an incoming train at Frankfurt’s main station (general view, pictured) shortly before 10 this morning

He is believed to have been hit by an InterCity Express (ICE) train, that travel at speeds of up to 186 mph (300 km per hour).

Commuters at the station ‘howled’ after seeing the child fall to his death, as police, fire brigades, 16 ambulances and a helicopter arrived at the busy station in Germany’s financial capital.

Several witnesses needed medical treatment after seeing the death, hessenschau.de reported, and a conductor, who saw the incident from a train, shouted.

The station was ‘full of children’ a witness told the publication.

The suspect, who was dressed in black trouser and an olive T-shirt, reportedly tried to push others, including a woman who was attacked at the same time as the child but managed to make her way back onto the platform.

Four of the busy stations tracks were closed following the attack, causing delays for dozens of commuters.