A group of schoolchildren who hurled rocks at trams were made to clean them up over their half term break.

Five youngsters aged 10 were responsible for throwing missiles at three passing trams in Failsworth, Manchester, during the summer holidays.

One passenger was left with minor injuries and the line had to be temporarily suspended. 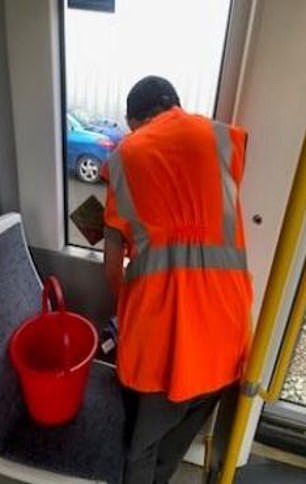 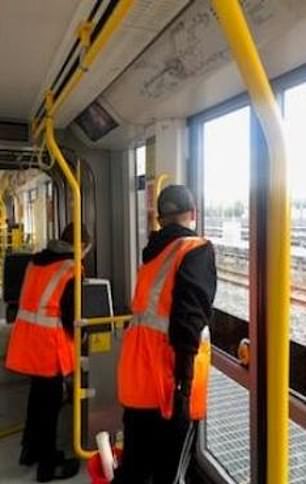 The five children are shown wearing high-viz jackets, left, to scrub windows, and they are seen wielding buckets and sponges, right, as they clean trams during their half-term break in Manchester

The children carried out the cleaning work as part of a ‘restorative justice programme’, which aims to reform those who commit anti-social behaviour.

The children also met up with two drivers whose trams were damaged during the incident.

And now an image of their punishment has been released as part of a public report to councillors.

It shows the youths wearing high-viz jackets and wielding buckets and sponges as they clean trams during their half-term break.

The drivers explained to them what impact the incident had on them and their passengers during the session at Queen’s Park depot in Manchester.

The children were shown pictures of the damage and were warned that reoffending could result in a charge and appearance at a youth court.

Home visits were also made, and their parents were involved. The youngsters apologised for their actions and agreed to become young ambassadors for Metrolink.

Yobs have attacked the Manchester Metrolink network nearly 1,200 times over two years, which has led to a crackdown by the TravelSafe team, made up of security staff, PCSOs and GMP officers. 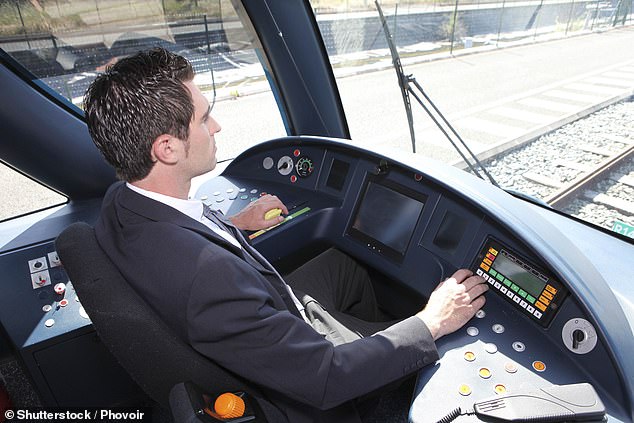 The drivers explained to them what impact the incident had on them and their passengers during the session at Queen’s Park depot in Manchester. Five youngsters aged 10 were responsible for throwing missiles at three passing trams [File photo]

Their main focus has been the Oldham and Rochdale line, which is most targeted by offenders. Restorative justice process holds offenders to account for what they havedone and helps them take responsibility for their actions and make amends.

To date, there have been no reported cases of reoffending by those ordered to go through the process. The restorative justice programme was arranged by The TravelSafe Partnership, which targets crime, antis-ocial behaviour and fare evasion on the Metrolink.

Graham Lord Jones, operational security manager at KeolisAmey Metrolink, said: ‘The children and their families were all clearly receptive to the warning and apologised to our staff and police.’

Chief Insp Colette Rose from GMP said: ‘I’m pleased to hear the use of restorative justice has been successful on this occasion and the children have apologised for their actions.

‘Hearing first-hand from the drivers affected by the stone throwing is something which I am sure will stay with the children for a long time, as well as deterring them from becoming involved in any similar incidents.’

James Byrd Jr.'s family speak out after execution of John William King
Arsenal stars in carjack terror: Mesut Ozil is attacked by knife-wielding moped thugs in London
Boris Johnson insists fighting coronavirus is his top priority
Fat Britain: NHS figures show obesity-related hospital admissions have risen 15% in a year
'Covid-19 free' surgery units for cancer patients could 'save up to 6,000 lives in the UK'
Hammond lashes out at 'dreamers' who claim they can get a better Brexit deal
Don't call us heroes or victims, cancer patients say
Second US coronavirus vaccine trial launches in Pittsburgh and Kansas City