A top secret report has emerged which sheds new light on a little-known war atrocity in which six SAS commandos were executed by the Nazis.

The British paratroopers, including Captain Victor Gough, were taking part in Operation Loyton in the Vosges Mountains on the France-Germany border when they were captured in October 1944.

The Brits, who had been arming resistance fighters and disrupting roads and railways, were taken to a PoW camp in western Germany.

On November 25 they were taken in a lorry into a nearby wood where they were shot and buried in a bomb crater. 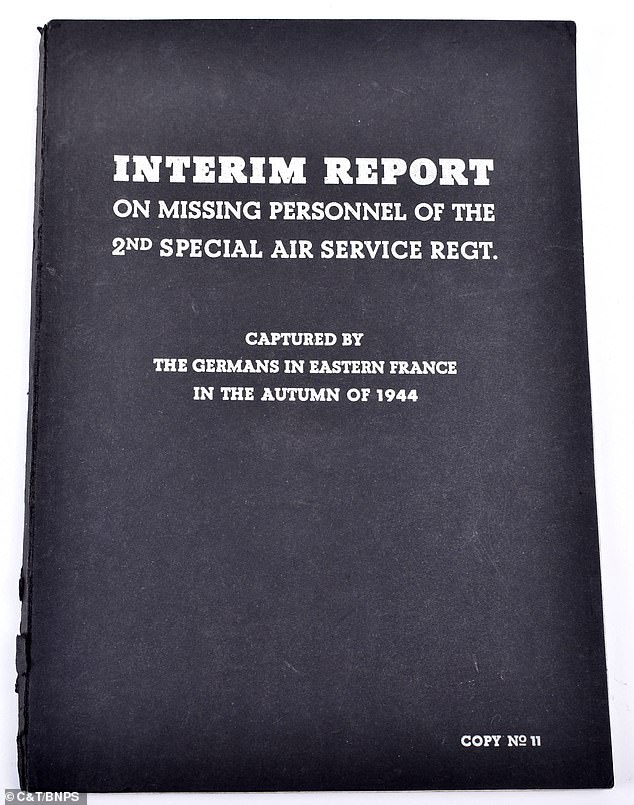 This copy of the report belonged to Captain Christopher Sykes, who took part in Operation Loyton but evaded capture. It will be auctioned tomorrow and is expected to fetch £650

Four American airmen and four French civilians, three of whom were priests, were also executed.

Now a report into the massacre compiled at the end of the war by a British officer, Major E Barkworth, of the 2nd SAS Regiment, has emerged for sale at auction.

The report includes a chilling eye-witness account from German lorry driver Albert Arnold who drove the prisoners to their place of execution.

He said they were murdered three men at a time, with casualties lined up next to the bodies of their comrades.

One of the priests tried to run away but he was gunned down after 100 yards.

He said: ‘The 10 Prisoners of War and four civilians were ordered to parade outside the camp, and enter the lorry. Spades were also loaded. 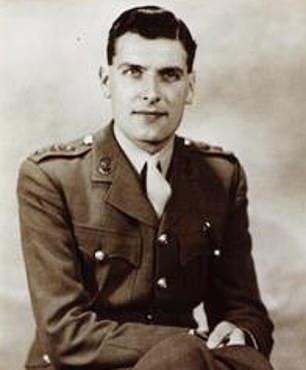 ‘Before the lorry left the prisoners’ kit was taken from them.

‘The lorry then proceeded to the edge of the wood near the cemetery of Gaggenau.

‘The first three prisoners including a priest were taken out and marched into the wood.

‘The priest realised what was afoot, and ran away. He covered a distance of 100 yards before being shot.

‘Those in the truck heard a total of three shots.

‘Between 10 minutes and a quarter of an hour after the first three had gone, the next three were taken and again three shots were heard, and so on at the same intervals until all were accounted for.

‘Those about to be shot were made to stand by the bodies of their dead comrades.

‘The clothes were removed from the bodies and some burnt.’

The report also contains harrowing photos of the bodies being exhumed and a list of the perpetrators.

In total, 11 ‘war criminals’ thought to be responsible for the atrocity are listed, including the PoW camp commandant Karl Buck. 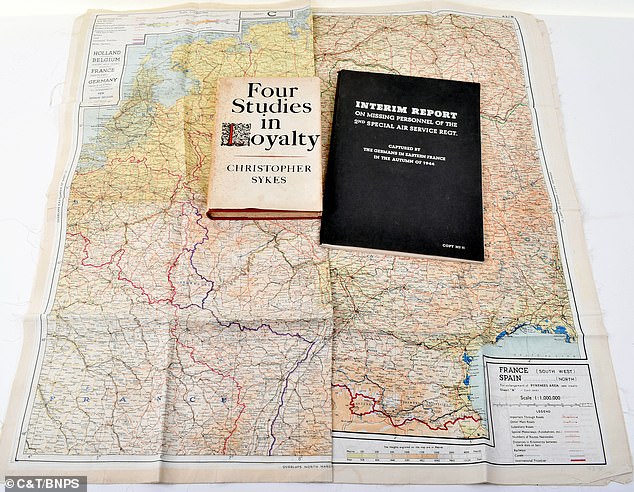 Only 25 copies of the top secret report were ever made, with others kept in the War Office. Capt Sykes’ report is number 11

Following the publishing of the report on July 15, 1945, they were all tracked down and arrested, before facing trial at the British Military Court, Wuppertal, Germany, in May 1946.

Ten out of the 11 were found guilty of committing a war crime – five of them were executed, five others imprisoned and one was released.

This copy of the report belonged to Captain Christopher Sykes, of the 2nd SAS Regiment, who took part in Operation Loyton but evaded capture.

It has more recently passed into the hands of a private collector who has now consigned it for sale with C&T Auctions, of Ashford, Kent, where it is expected to fetch £650. 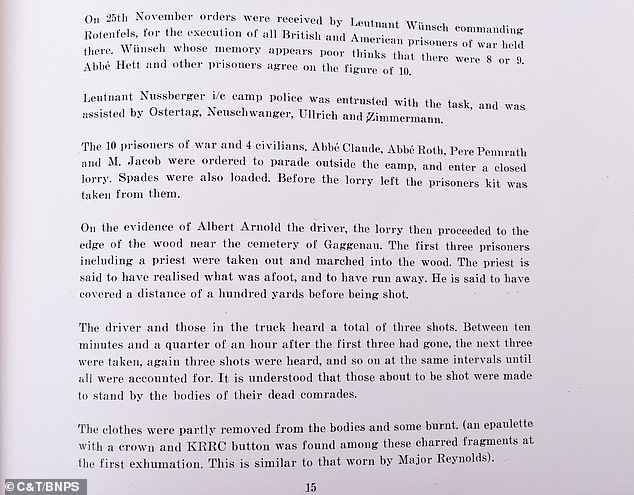 The report includes testimony from Albert Arnold, a German lorry driver who drove the prisoners to their place of execution

It is believed that only 25 copies were ever made, with others kept in the War Office and issued to members of the high command.

Tim Harper, specialist at C&T Auctions, said: ‘This report was given to Captain Christopher Sykes who took part in the operation but survived.

‘He would have kept hold of it for some years after the conflict until it more recently passed into the hands of a collector.

‘The men were executed under Hitler’s Commando Order and the British made a huge effort to track down those responsible for the cold-hearted killings.

‘It is a fascinating document laying out all the details of the investigation with graphic photos.’

Operation Loyton was launched on August 12, 1944, but unfortunate timing meant the forces were parachuted into the Vosges Mountains at the point the German Army was reinforcing the area.

Despite this, for the next two months they were able to disrupt roads, railway lines and communications.

However, with supplies dwindling and the Germans further reinforcing their numbers, the call was made for the paratroopers to make their way back to Allied lines. 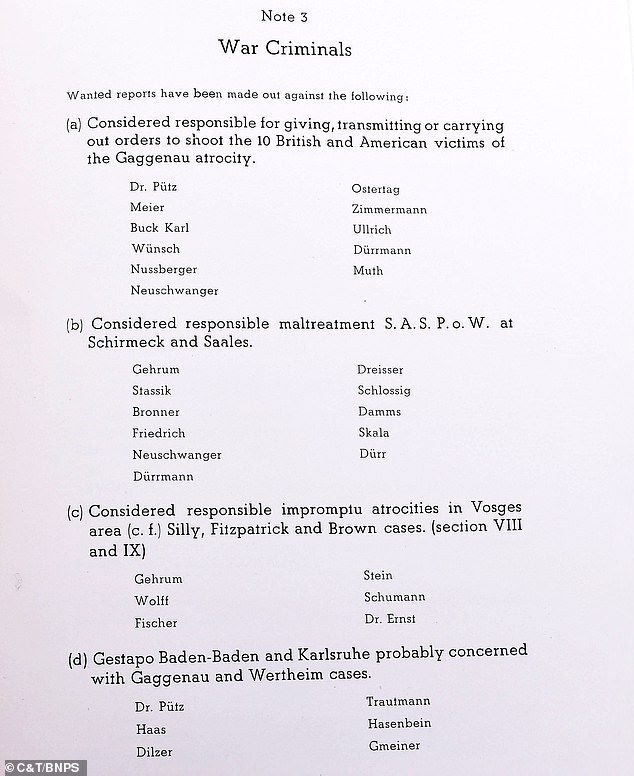 The report gives the names of 11 ‘war criminals’ who were thought to be responsible for the executions, including the PoW camp commandant Karl Buck

During the fighting and breakout operations 31 men were captured and later executed by the Germans.

The executed PoWs at Gaggenau were not properly buried until May 13, 1945, two weeks after the war ended.

They were laid to rest at the Gaggenau town cemetery under the auspices of the French.

Adolf Hitler introduced his order to summarily execute captured commandos following an assault by a dozen British commandos on the Nazi-occupied island of Sark in the Channel Islands in October 1942.

After going to the isolated house of a local widow who gave the men crucial intelligence about the enemy positions, the men captured five German soldiers.

When two of them tried to break free and alert their comrades they were shot and killed.

The women who visit killer Chris Watts in prison as photos his mistress sent him are revealed
'I would walk away': Trump's bullish No Deal advice is seized upon by Brexiteers
Prince Andrew tells BBC he was being 'honourable' by staying with paedophile Jeffrey Epstein
Gene Kelly's widow rips GMA host Lara Spencer for mocking Prince George
Woman 'falsely accused taxi driver of rape after she lost her mobile phone'
Wayward behavior of Trump, Manafort subordinates becoming a pattern
Harry and Meghan delight fans by choosing unseen wedding photo for this year's Christmas card
Indonesia death toll rises to 1,649 with hundreds still missing