Inside The Bank Of England

There you are, stretched out in your favourite recliner, enjoying a post-prandial kip, when someone starts shouting their head off. You open one eye and, wouldn’t you just know, it’s that ruddy Judi Dench.

The diminutive dame started causing trouble in the rainforest on her Wild Borneo Adventure (ITV) after conservationists pointed out a massive male orangutan snoozing in the high branches of a tree, and played her a recording of the ape’s signature grunt.

Judi’s pitch-perfect theatrical ear enabled her to imitate it exactly. She let out the menacing groan known as a ‘long call’, the battle cry of the alpha male orangutan. It warns all the other tough-guy primates in the forest to back off — like Phil Mitchell swaggering into the Queen Vic and growling: ‘Ere I am then, come and have a go if you want your ticket punched.’ 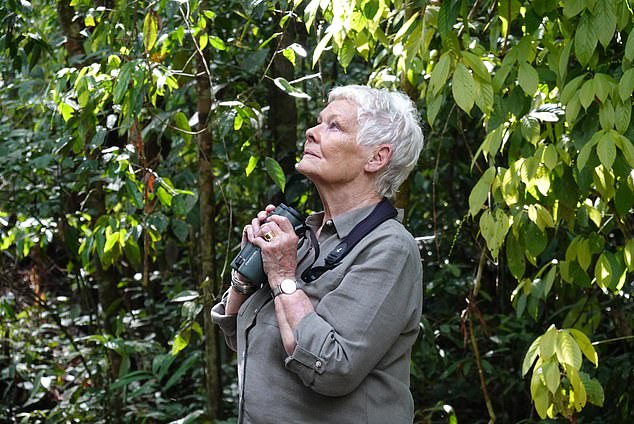 Up in his tree, the aggrieved ape scowled back. It was a look that plainly said: ‘Get yourself up here and try repeating that.’

He might have thought twice if he’d seen the nimble dame, looking two decades younger than her 84 years, ascending a tree that was taller than Nelson’s Column.

Strapped into a rope harness and hauled aloft by a gang of locals, she went fearlessly in search of exotic insects — and found a centipede with a venomous bite that can kill humans.

None of this daunted Judi. This show is part of a new trend for sending veteran thespians on safari, instead of the usual self-centred comedians, and this was certainly the right Shakespearean legend for the job.

She proved courageous, witty, bouncing with energy and constantly curious. When a praying mantis landed on her neck, or a soldier ant sprayed jets of foam towards her face, she reacted not with fear but fascination.

We’ve already seen Miriam Margolyes stomping across India and America, being grotesquely rude to anyone in her path, and Dame Julie Walters taking the train around Britain’s coastline. What next — Dame Maggie Smith in the Antarctic? Those penguins better be on their best behaviour.

Ruined nylons of the night:

Designers Tamara and Kate ran out of wood for their benches in The Great Gardening Challenge (C5) so they took a few planks from pallets. But splinters were a problem . . . they didn’t want their tights to snag. Ouch!

A famous actress, or indeed anyone with a sliver of charisma, would have been a welcome sight on Inside The Bank Of England (BBC2), a documentary that featured £100 million banknotes and yet still managed to be drier than stale porridge.

The notes were big and white, like old fivers, and they were intended as paper guarantees to underwrite regional banks, rather than for spending. That’s probably a good thing: ever tried to ask for change from a hundred million quid in your local corner shop?

If the show had spent longer in the vaults below Threadneedle Street in the City, where shrink-wrapped tenners were piled up to the ceiling, it could have been highly instructive — especially for the old geezers who did the Hatton Garden safe deposit job. But mostly we sat through endless condescending platitudes from pompous senior bankers: ‘The economy’s a very big thing, millions of people in it,’ one informed us.

Aware that they had a very dull two-parter on their hands, the producers combed their footage for anything vaguely slapstick caught on camera.

If two men in suits have accidentally bumped against each other in the bank’s marble corridors during the past year, you can bet you’ll see it here.

The whole episode built up to the momentous decision in May last year not to raise interest rates. I was desperate for a robbery, just to liven things up.

Two arrested after dog tied to rock rescued from river
Supporters of man charged with murder of journalist Lyra McKee, 29, clash with police
'Diana would be "thrilled to bits" with Baby Sussex' says Paul Burrell
Nigel Farage is pelted with MILKSHAKE on European election tour
PIERS MORGAN: Boris can boast all he wants, but the death toll tells the real story
Careless driver runs over family ducks woman tried to save them by helping them cross a road
Son floors man 'harassing' his ill mother with a single punch
MIT graduate Dr. Katie Bouman: the computer scientist behind the first ever image of a black hole