My Travels And Other Animals

Time flies. Sir David Attenborough commented in Climate Change: The Facts (BBC1) that he’d been highlighting the danger of a man-made environmental crisis for 20 years.

In truth, it’s more than 30. In his four-part BBC history of the Mediterranean, The First Eden, he first raised the spectres of habitat destruction, over-fishing and plastic pollution — back in 1987.

Three years later, in The Trials Of Life, he warned of global warming and the melting polar ice. But that show’s producer, Alastair Fothergill, revealed his frustrations to me, in an interview last year, at the Beeb’s horror of anything that smelled political: ‘We had to hide that away in the last five minutes,’ he said. 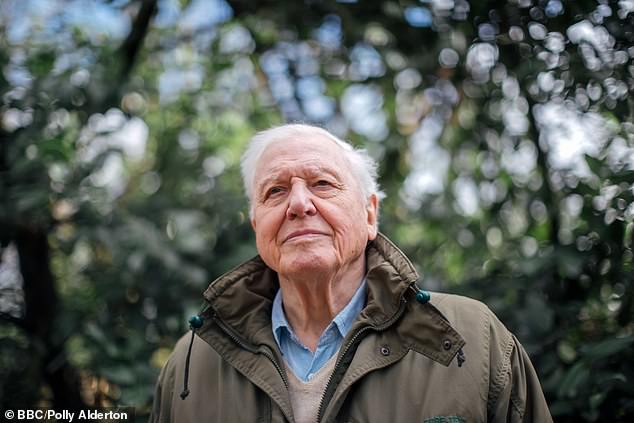 Sir David Attenborough has been warning about the dangers of environmental destruction for decades, and in Climate Change: The Facts, he spoke to a series of scientists about the extent of the damage caused to the planet

No more. This hour-long documentary was all ecological polemic, from start to finish. BBC executives must have taken an active decision to air the documentary, of course, despite the demos disrupting London this week.

The trouble was that, without a taut five-minute mission to convey the facts, the programme became unfocused — a succession of scientists explaining their pet theories.

Sir David’s voice cracked with regret as he surveyed the missed opportunities to save the coral reefs or prevent the ice and permafrost from melting. Nearly a tenth of all animal species are facing extinction because of climate change, he said.

Some of the scientists sounded almost smug, though. They’ve been preaching about Doomsday for decades and were roundly ignored: perhaps they think global apocalypse is a small price to pay for the satisfaction of being proved right.

Their predictions veered from inconvenience (floods, hotter summers) to blazing armageddon (the end of civilisation was mentioned). 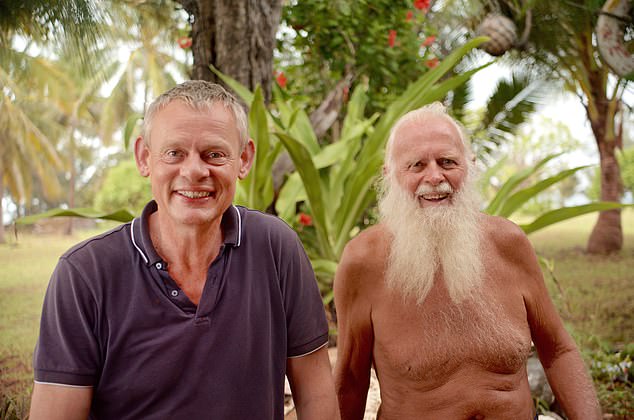 Martin Clunes recalled his meeting with Dave Glasheen, who has been dubbed the real life Robinson Crusoe for living on a remote island off Australia, in My Travels And Other Animals

The magisterial Attenborough aside, only NASA’s James Hansen managed to give some perspective.

Hansen’s work helped put the satellites that photograph our planet into orbit — so he had a big hand in Wednesday night’s Earth From Space, too. He pointed to the scale of deforestation that became fully apparent when we were able to survey the whole globe.

Destruction of rainforests was, he said, ‘a contagion, a disease across the planet’, and the felling of trees in Brazil, Indonesia and elsewhere was responsible for at least a third of the increased carbon dioxide superheating the earth.

At the end we were urged to consume less, fly less and support the schoolchildren staging classroom strikes. But surely one obvious measure, also, would be to plant lots of trees.

The end of civilisation won’t bother Dave Glasheen, a tycoon turned hermit who lives off the Aussie coast on remote Restoration Island, where Captain Bligh wound up after the Mutiny on the Bounty.

Martin Clunes was recalling his encounter with Dave and his pet dingo Polly, on a round-up of the best of his telly adventures, My Travels And Other Animals (ITV).

Lost innocence of the week:

‘We’ve got food,’ Dave declared, plucking a mango. ‘It falls off the trees, like the Garden of Eden.’ He was watched by a mannequin in a wig and skimpy outfit. Dave is well-known to TV viewers — Ben Fogle visited him, too, on New Lives In The Wild, and discovered the doll’s name is Miranda. But Dave shares his shack with another plastic partner, Phyllis.

Martin mentioned none of this. Well, it was before the watershed.

His most dramatic encounter was with a wolf pack in north Devon. Their keeper, a wild-eyed man with straggling hair, insisted that the way the animals bounced and slobbered over Martin was part of their complex canine social language.

Actually, it just looked like they wanted a good tummy tickle.

Sir Michael Gambon, 78, 'withdraws from Sky One's Breeders after struggling to remember his lines'
Turn heating down to save the planet: MPs tell Brits to set their heating no higher than 19°C
Forget pink panther, it's the pink flying squirrel!
Unilever considers selling PG Tips and Lipton tea brands
66% of New York coronavirus hospitalizations are people staying at HOME
Conor McGregor says his 'lovely' aunt has died but clarifies it was NOT from coronavirus
Gerard Depardieu quizzed over allegations he raped a young actress
Ghislaine Maxwell is in 14-day COVID isolation at 'third-world hell hole' Brooklyn jail,