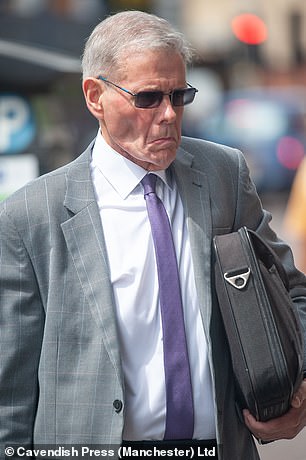 A churchgoing family GP had an affair with a patient after grooming her with intimate hugs during consultations at his surgery, a medical tribunal has heard.

Married father-of-three Dr Alan Lees, 64, had illicit secret sexual liaisons with the woman at a shopping centre and cinema after he gave her cuddles at repeat appointments – claiming they would ‘make her feel better,’ it was claimed.

The woman, who is a mother of one, was said to have fallen ‘madly in love’ with the doctor during their two-year affair.

She said in one encounter that Lees, of Scunthorpe, Lincolnshire, hugged her and gave her a prolonged kiss on the cheek in front of fellow parishioners at their local church where he played the organ and sang as a bass in the choir.

They allegedly swapped up to 40 texts a day, with Lees saying how he loved her – and he would turn up at her home to have sex with her before heading off to surgery.

Lees eventually ended their romance, claiming he wanted to save his marriage – but he slept with his mistress again, and police were called when she went to confront him at a house where he was seen, only to find another woman there, it was claimed. 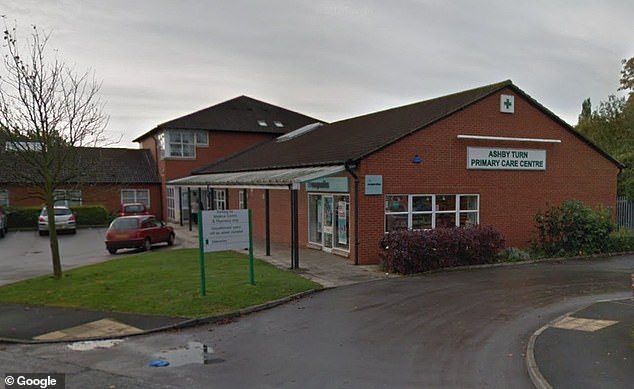 No action was taken but the mistress, known as Patient A, made a complaint to the General Medical Council – branding the GP a ‘pathological liar’ who had ‘deceived a number of people’, adding: ‘I was attracted to him and he wrecked my life.’

The illicit romance began after Lees began treating the patient in 2010 at the Ashby Turn Primary Care Centre after she suffered a series of headaches following the death of her mother, the Medical Practitioners Tribunal Service in Manchester heard.

GMC lawyer Elizabeth Dudley-Jones said: ‘She was diagnosed with tension headaches and was said to be very tearful. Her blood pressure was very high and she was very upset.

‘Patient A remembers Dr Lees asked her if a hug would make her feel better and she said ‘no not really’ but he said ‘I’m going to hug you anyway’ and he hugged her.

‘She thought at the time it was just friendly but acknowledges her head was ‘all over the place’. Repeat appointments were then made with Dr Lees.

‘She said during the appointments they discussed everything and nothing and she also says every time she saw the doctor he gave her a hug.

‘She thought it was friendly but candidly acknowledged the hugs were different than that of a friend. She described in every occasion he would hold her and nuzzle his head into her neck.

‘She said she never expected it but it happened at every appointment. She said she was at a truly low ebb and did find him comforting.

‘Her friend became concerned about their relationship. She said her friend hadn’t been herself and she just wasn’t right.

‘Another friend said she struggled to function with everything in life and she didn’t work. Her friends suggested she should get some counselling and patient A told them she was receiving counselling from the doctor and described him to be ‘great’ and ‘brilliant’.

‘Friends noticed that patient A had seemed to change and was much brighter when she spoke about him. Dr Lees would continue to hug her every time he saw her. He told her he was hugging her because he thought she ‘needed it’.’

‘During Christmas of 2014 he invited her to a Christmas concert but when she arrived he greeted her with a hug and a kiss on the cheek. Patient A knew Dr Lees’s wife attended the church too.

‘During the interval he stood with patient A and at the end of the concert he gave her an intimate hug and a prolonged kiss on the cheek.’

The hearing was told Patient A left Lees’ surgery in August 2015 as she moved house but he asked if she wanted to meet him for a coffee.

Miss Dudley-Jones added: ‘She accepts they had banter and chit chat and she thought something of it. She gave him her phone number and he gave her a tight hug. She thought he was going to kiss her.

‘She describes that she had become attached to him through the hugging and comfort he gave to her. Two weeks and two days later she received a text from Dr Lees stating: ‘Hi, This is me, yes it really is. Can you confirm this is the right name?’ and Patient A said it was the right name.

‘Dr Lees responded asking to meet for coffee and she responded yes, ‘whenever wherever’. It is the GMCs case that Patient A was vulnerable and that Dr Lees knew she was vulnerable. That vulnerability didn’t cease after she left the practice.

‘She said they had a generally chatty conversation, there was a lot of banter and he hugged her after she left. She remembers he got in contact with her again and told her he found her attractive and wanted to meet up. Patient A said she had never done anything to encourage that and she was very surprised about that.

‘But after that they were in contact everyday sending over 40 texts a day. They saw each other two to three times a week. This then developed into a sexual relationship. He told her he loved her and she said the same, she knew he was married and he said he wanted to leave his wife.

‘She said on one occasion he was concerned about being seen in public after they saw another member of staff from the practice but he reassured her that she wouldn’t say anything. They went on dates to the cinema and shopping precinct and he would come to her house.

‘But in July 2016 he told her his wife had talked to him and said she wanted to give the marriage another go and their children needed him. Dr Lees told Patient A his wife knew what was going on, and after this the contact gradually deteriorated. Upset was caused to Patient A and she messaged Dr Lees and asked him if there was someone else.

‘He didn’t say ‘yes’ or ‘no’, but he began crying on the phone. He then messaged her asking her to put the kettle on and he came round to her house – they resumed the sexual relationship and told her how much he missed her.

‘In May 2017 she still suspected something wasn’t right and she saw him drive to an address and texted him asking if he was going to see his daughter and he didn’t text her back. At 9.30pm that day she knocked on the address and a woman answered the door and Patient A asked if he was in and she was told he wasn’t.

‘She then asked for him to come out and sort things out with her. The woman then said she would call the police and Patient A said she had done nothing wrong. Dr Lees didn’t come out so she left and she was very upset. The police did attend but there were no arrests and no further action was taken. Patient A left and went to her friends house.

‘On May 14, 2017 she received a text from Dr Lees who asked Patient A not to contact him again as she had caused a scene and upset people. Patient A said she was devastated as she received no apology or no explanation from him as to why he deceived her.

‘She described his behaviour, stating he had deceived a number of people and she said he was a pathological liar. She said Dr Lees had comforted her and that’s why she was attracted to him, she said he wrecked her life. She said it was unacceptable and inappropriate.

‘She said he met her and maintained contact with her, there was immediate banter and flirty behaviour. He then hugged her and this grew to the point she fell madly in love with him.

‘She said this was an abuse of his position of trust when she was at her most vulnerable. She said she was involved in an inappropriate emotional relationship when she was at a low ebb.

‘He provided her treatment which was inappropriate as a sexual relationship began shortly after she left the practice. She was sharing her bad trauma and he sensed a relationship and began behaving inappropriately towards the patient.

‘She said she was in a vulnerable low state and his contact towards her was unprofessional and unethical and done to satisfy his own gratification.

‘She said this was akin to grooming for a subsequent sexual relationship. Her friends have said that Patient A has never recovered from this.’

Lees who has since retired did not attend the hearing but a letter read to the tribunal said: ‘He has accepted his relationship with Patient A from September 2015 to May 2017 was wholly inappropriate. He deeply regrets his error of judgement and he apologises for the impact of his actions.

‘But he strongly refutes that his actions were sexually inappropriate when patient A was a patient at the practice.’

Lees also denies kissing her at the Christmas concert. The hearing continues.