‘Climate change‘ protesters have stormed an event in central London this evening where Chancellor Philip Hammond was giving a speech.

Someone was heard shouting: ‘You have made your point now so if you could kindly leave.’

During the disruption, with the protesters clapping and chanting, the Chancellor left the room while he waited for security to deal with the situation.

A group of women, from Greenpeace, were seen lined up wearing red dresses, and also had sashes which displayed climate change messages.

Security has since ejected the women from the annual Mansion House dinenr, which was being held for City banks and finance workers. 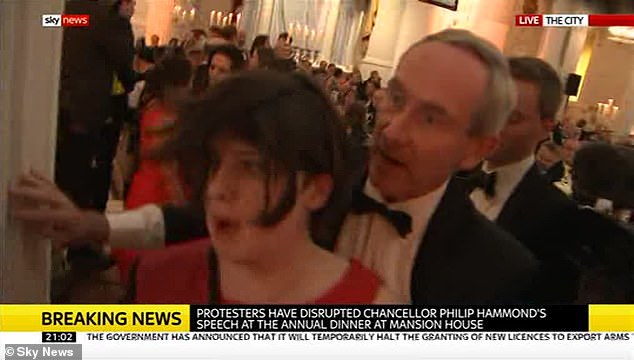 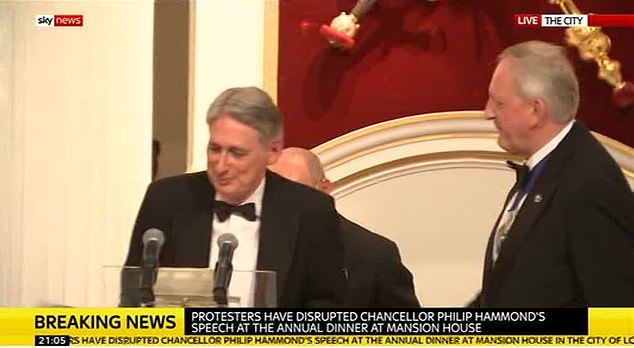 Despite the disruption, Mr Hammond continued with his speech with a smile on his face.

The protesters were among 40 volunteers who ‘gatecrashed’ the Chancellor’s Mansion House speech, according to Greenpeace.

Footage showed several women being ushered out of the banquet hall as attendees in black tie looked on.

Mr Hammond said: ‘The irony is that this is Government that has just led the world by committing to a zero carbon economy by 2050.’ 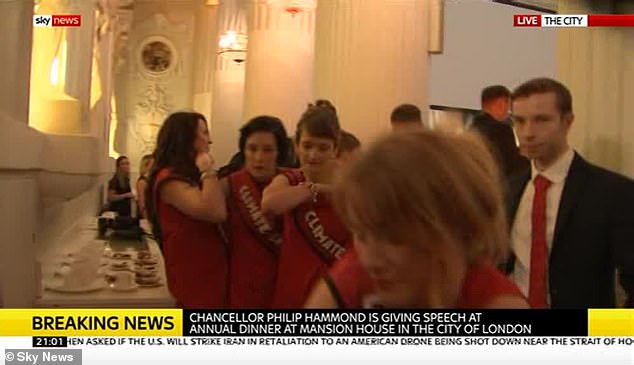 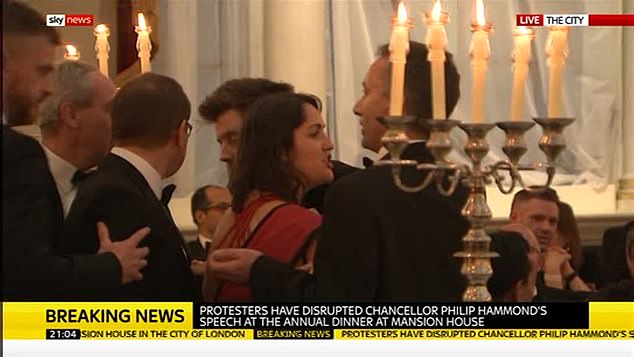 Continuing his speech Hammond said he couldn’t imagine a Conservative and Unionst-led government, ‘actively pursuing a no-deal Brexit willing to risk the union and our economic prosperity.’

He added: ‘I will fight, and fight again, to remake the case for pragmatism and, yes, for compromise in our politics – to ensure an outcome that protects the union and the prosperity of the United Kingdom.’

Touching on the leadership campaign, he added that the UK’s politics are ‘not in such good shape’.

He said: ‘It may be that I’m wrong, and a new leader will persuade Parliament to accept the deal it has already rejected, or that the European Union does a 180-degree U-turn and reopens the Withdrawal Agreement.’

After he finished his speech the Governor of the Bank of England, Mark Carney joined the stage – where he was met with applause.

Areeba Hamid, climate campaigner for Greenpeace UK, said: ‘This is a climate emergency. Business as usual is no longer an option. The real bottom line, the priority that needs to come before all others, is not profit, revenue or growth, but survival. That needs to be recognised in every boardroom and on every balance sheet, starting with the Chancellor’s.

‘The people in this room have been funding climate change, and we’re not giving the banks and hedge funds a pass for their unethical investment decisions anymore. The Treasury is the Government’s banker. It plays the same role propping up vested interests and blocking progress on climate change.

‘But science demands a radical programme of policy interventions and public investment if our economy is to survive the coming storm. The serious, sensible, grey-suited grown-ups in the room ignored the warning signs and crashed the economy in 2008. We can’t afford to let them crash the climate too.’