Brian Cromby was given a 12-month sentence last week after he was busted by undercover investigative reporters who recorded him admitting most of his clients weren’t sick. Pictured is Cromby leaving Liverpool Magistrates’ Court earlier this year in May

A compensation cowboy exposed by The Mail on Sunday has become the first fraudster to be jailed for encouraging people to submit fake holiday sickness claims.

Brian Cromby was given a 12-month sentence last week after a court heard that he briefed undercover reporters on how to scam insurers, telling them: ‘Most of my clients weren’t sick.’

He hired two young women to hand out his business cards at the event where he was secretly filmed telling two journalists how he could secure them each a payout of £2,000 if they lied about being ill on holiday.

‘All you have to say is you had the s***s for a week and that’s it and I’ll get you two grand,’ he boasted.

‘It’s as simple as that, yeah? Two grand, that’s the average pay cheque. If you want to say you were sick for ten days or two weeks, I’ll get you three grand.’

During the event in May 2017, the Liverpool-based businessman also offered to coach the journalists on how to concoct their fake stories, adding: ‘I’ll tell you all the symptoms that you had… You don’t need no medical evidence.’

The 34-year-old, who had previously pleaded guilty to encouraging an offence, sat stony-faced in the dock at Liverpool Crown Court on Friday as Judge David Aubrey sentenced him.

‘In truth it was a sham. It was a scam and at the very least it was promoting or encouraging dishonest civil claims.

What you were intending was to persuade another to dupe, deceive, swindle, defraud a travel company by making representations relating to potential holiday sickness, when in truth you were promoting dishonesty.

‘You thought the investigative journalists were potential clients and you were driven by the concept of dishonest, easy money.’

He added: ‘You had set up a claims business called RTA Solutions, but it had nothing whatsoever to do with solutions. It was to do with promoting dishonest civil claims.’ 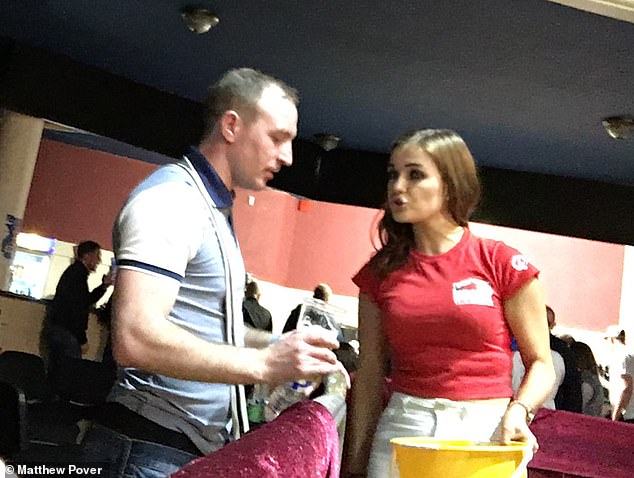 He was secretly filmed telling two journalists how he could secure them each a payout of £2,000 if they lied about being ill on holiday

Turning to Cromby’s exchange with the journalists at the charity event, the judge said: ‘You say it was marketing bravado, but it was nothing of the sort. You were seeking to make another dishonest claim for holiday sickness.’

RTA Solutions, which was set up in 2014 and closed in May, found clients and directed them on to lawyers.

It is illegal for lawyers to pay claims companies for referrals but many dodge the rules by paying a monthly retainer.

The number of holiday sickness claims leapt by 500 per cent between 2015 and 2017, driven by unscrupulous claims-management companies such as RTA Solutions and law firms seeking to make a quick profit. The situation became so widespread that leading hoteliers in Spain were even forced to consider banning British tourists.

While holidaymakers have been fined and one couple jailed for submitting false holiday sickness claims, Cromby is the first claims businessman to be prosecuted.

Praising The Mail on Sunday, Clive Myerscough, a Merseyside Police fraud investigator, said: ‘People like Cromby who encourage others to make fraudulent claims against the travel industry also risk undermining genuine holiday sickness claims. I want to thank the journalists who reported his offending and assisted our investigation.’

Donald Trump says he has seen evidence that the coronavirus started in Wuhan virology laboratory
Dog owner abandons Staffie-cross inside church with handwritten apology
May CALLS OFF dash to Brussels after late night crisis call to Juncker ended in Brexit deadlock
Fury of financier accused of stealing £3bn as Malaysian government seize his parents' £4.1m home
NASA reveals four options for its future flagship telescope
'They've lost all perspective': Palace insider blasts Harry and Meghan for 'swipe' at Queen
Halle Berry leads a slew of stars trying the 'Dolly Parton social media challenge'
The Voynich manuscript may NOT have been cracked