With great fanfare, Boris Johnson last week announced a ‘world beating’ army of contact tracers whose job is to stop coronavirus in its tracks. No fewer than 25,000 have been hired.

Their mission – to combat coronavirus by sleuthing down every person in danger of contracting Covid from each new case that emerges.

On Thursday that scheme went live – four days ahead of the billed start date. Presumably, this was so the Government could meet its original target of opening up schools and shops by June 1, something which could only be achieved with a functional test and trace system in place. Yet it seems this may not be case.

‘People are panicking as there is no information on the websites/systems to make the calls,’ wrote one test and trace caller at 9.39am, on the day test and trace went live, in an internal chat seen by the Daily Mail.

Many contact tracers had no idea the system was launching that day. Others hadn’t completed basic training. And before 11am, medical phone handlers reported that the website had crashed, and were greeted with the message that ‘this has been reported as a critical incident’.

On the same morning, 10,000 new test and trace call handlers hired by Serco, one of the main firms the Government has outsourced to, were treated to a motivational message by Health Secretary Matt Hancock. 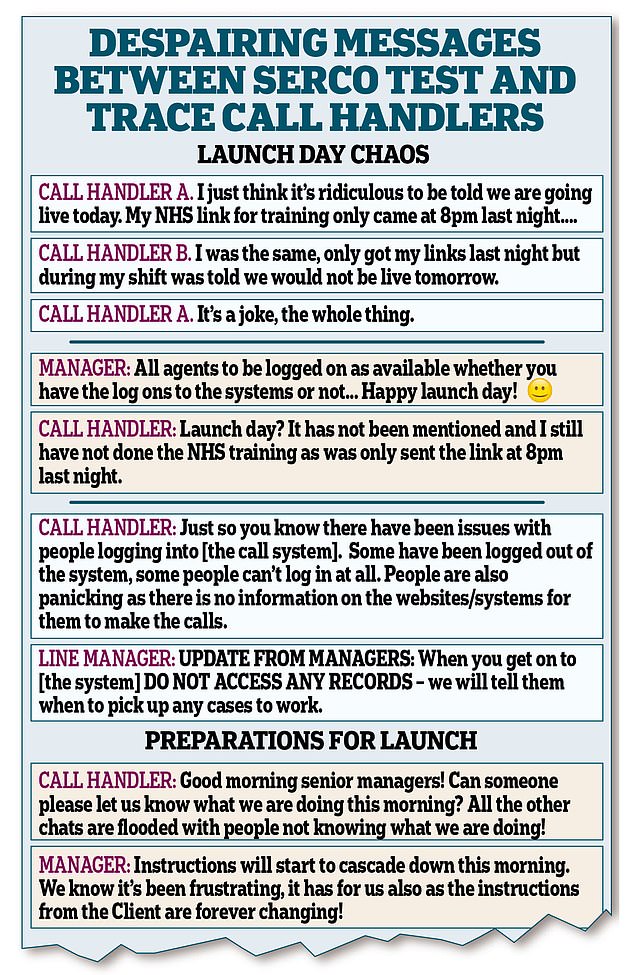 An internal chat seen by the Daily Mail says, ‘People are also panicking as there is no information on the websites/systems for them to make the calls’

‘I am deeply proud of what the whole team has already achieved over the last few weeks,’ he said in the internal video message.

‘We know that not everything will work perfectly from the get-go… There will be bumps in the road, I get that, but the most important thing is that when we go over one of those bumps we learn.’

Serco was well aware of the rocky terrain prior to the launch, having been forced to apologise for breaking data protection rules when it shared email addresses of 300 new recruits last week.

And on Wednesday morning – hours before Mr Hancock announced to the public when NHS Test and Trace would go live – Serco chief executive Rupert Soames issued an apology to all new test and trace recruits.

The brother of former Tory MP Nicholas Soames and grandson of Winston Churchill said in an audio message to Serco employees: ‘First I want to apologise for all of you who have experienced less than smooth recruitment and training.

‘What we have done is almost unprecedented… in the space of about three weeks… [to] have recruited almost 10,000 people to trace and contact people who are likely to have been exposed to this horrible disease.

‘The idea that [in] such a huge exercise, all the strands would come together at precisely the right time, belongs only to the fantasies of those people who have never organised anything more than a tea party.’

However, days after the chaotic launch, we can reveal disturbing allegations about the Government’s core policy to ‘move the country forward’.

A whistleblower employed by Serco approached the Mail last week concerned that the system was catastrophically under-prepared. Far from being ‘world beating’, evidence seen by this newspaper reveals Boris Johnson’s contact-tracing army to have been chaotically recruited, left ill-prepared and, in many cases, left idle for days at a time – at a taxpayer cost of £1.6million per day.

‘There’s absolutely no chance it’s ready,’ the 38-year-old whistleblower from Manchester said. ‘If it does happen [this week]… there will be catastrophic and continued failings from that day onwards. This is serious – it’s a pandemic, and lives are at risk. I’m genuinely worried about how we are about to be set loose on the public’.

The whistleblower was hired on May 13 as a ‘tier 3’ manual track and trace call handler, earning £8.72 per hour.

One of thousands of basic ‘tracers’, his job is nevertheless a critical one: to call a list of people who have been in contact with someone who has tested positive for coronavirus and ‘provide them with public health advice’, according to training documents.

The call handlers’ role is to ask people if they have experienced any symptoms, input these into a government database and, where necessary, instruct the individuals to self-isolate. 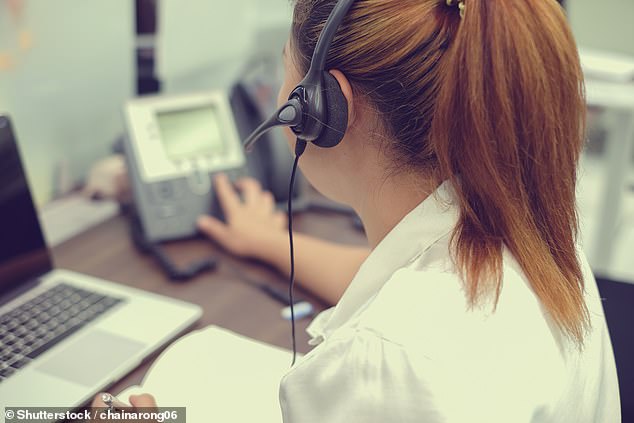 Many contact tracers had no idea the system was launching that day. Others hadn’t completed basic training (file photo)

As a tier 3 call operator, the 38-year-old works from home using equipment given to him by Serco, and will use a computer telephone system to work his way through an NHS database of names.

Tier 3 callers, who have no clinical experience, will be the first to contact the network of people around a confirmed Covid-19 case. They can pass on anyone challenging or complex – for example those who refuse to take advice – up to more expert contact gatherers at tier 2 or medically qualified staff on tier 1.

On his first day, the Serco call handler collected computer equipment from an office in Manchester including a hard drive, monitor, headset, keyboard and Ethernet cable. He says he was not asked for so much as a signature.

‘I offered my ID four times,’ he said. ‘I didn’t even have to fill out a form.’ Serco denies that anyone is allowed to take away equipment without identification. Serco also denies that recruits were hired without background and ID checks.

After two fully-paid days in which he was given no instructions for work, the whistleblower called his line manager on Friday May 15 to ask what he was supposed to be doing with the equipment.

He was added to a mandatory training session which had already started and blighted by technical problems for those taking part.

While such technical glitches might sound familiar to anyone suddenly thrust into the world of working from home, the whistleblower says he received no supplementary training to compensate.

Serco insists that: ‘All call handlers will undergo and need to pass nine hours of mandatory formal training before “going live”.’

But it’s not just Serco which is behind the curve. A whistleblower from Sitel, another outsourcing company which hired 5,000 contact tracers for the scheme, also reported problems. Emails seen by the Mail show that Sitel’s tier 3 call handlers did not go live on Thursday, 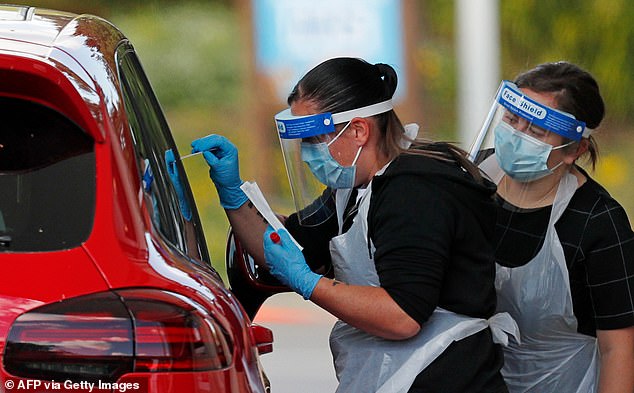 One, sent out the day before, said: ‘At the moment we have a completion rate of 20 per cent for NHS [e-learning] courses. This means a lot of us still need to complete the courses.’

‘No one is in a position to be calling anyone today,’ said the whistle-blower on Thursday.

The 19-year-old from Greater Manchester, who earns £10 per hour and started on May 21, said the job was advertised as a ‘customer service’ operator on jobs search site Indeed. He had no idea it was for the NHS until just before he was hired.

‘We did one full day of video training,’ he said. ‘After that it was self-learning. Now I’ve done my training but there’s nothing for me to do. It’s impossible to read the same thing over and over. I’ve just been watching the news instead.’

Similarly, the Serco whistle-blower says he and his new colleagues have spent their first weeks chasing managers for logins and passwords for the ten types of software used for the job. Correspondence also shows a Serco manager issuing weak, obvious passwords for a call handler to log in.

Last week a message from a new call handler to a line manager said: ‘Can someone please tell me what we are doing?’ A week into the job, the 38-year-old man at Serco summed up his experience: ‘So far I’ve watched Designated Survivor on Netflix, organised a new phone contract and arranged to have my new tattoo. It’s a joke’.

Training documents reveal the advice test-and-tracers will be required to give. ‘I’m really concerned’, said the 38-year-old. ‘If someone became ill [because] I gave out the wrong advice, I would never forgive myself.’

Serco said it was committed to supporting track and trace ‘with our tier 3 contact centre team working from pre-approved Public Health England scripts’.

A spokesman for the health department said: ‘All applicants are interviewed through a combination of online assessments and telephone screening and also have to provide DBS (Disclosure and Barring Service) and Right to Work information.

‘Only applicants that have passed the training modules and technical tests are allowed to … start work.’

With a vaccine months away at best, and teething troubles with the NHS app being tried out on the Isle of Wight, hopes of containing coronavirus rest on track and trace.

In his speech to Serco employees the previous day, Mr Soames had emulated his grandfather with a Churchillian call to arms.

It would appear that the army may need to train harder.

Trump triggers NHS storm saying health will be 'on the table' in trade deal talks
Sofia Richie shares a stunning bikini photo as she enjoys vacation in Australia with Scott Disick
Al Pacino to play King Lear in film adaptation of Shakespeare play
Grammar schools let in 750 pupils who failed to pass 11-plus
Prince Harry and Meghan Markle post a global Mother's Day message thanking 'Mummy, Mum, Mom, Mama'
My lesbian fling with Spice Girl bandmate Geri: Mel B finally clears up 25 years of rumours
Angela Rippon reveals 'highly respected' colleague pretended to expose himself while she was on air
At least one dead and 18 injured after 18-story Hard Rock Hotel in New Orleans COLLAPSES