Dominic Cummings is yet to return to Downing Street after developing coronavirus symptoms and entering self-isolation more than a week ago.

Boris Johnson‘s top aide has not been seen in public since before Monday March 30 when he put himself into isolation after getting symptoms over the weekend.

Number 10 has been insistent that Mr Cummings is working remotely but his continued absence is likely to spark further scrutiny of the health of key government players, especially after Mr Johnson was hospitalised with the disease.

There are growing concerns about the state of the Downing Street operation after numerous staff were laid low by the killer bug. 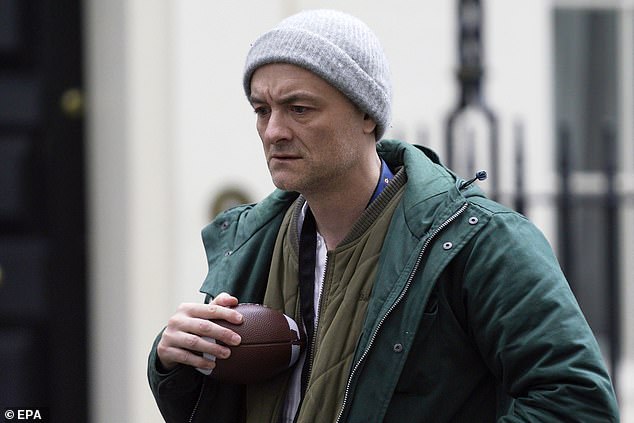 The PM’s other top adviser, Sir Eddie Lister, 70, has not been seen in public since the start of lockdown with his age putting him in an at-risk group. A number of other aides have also been off with symptoms.

The return of Mr Cummings would therefore act as a major boost to the government and dampen accusations of there being a political vacuum at the heart of Whitehall after Dominic Raab became de facto prime minister.

Downing Street said that Mr Cummings is working but not from Number 10 and insisted Number 10 is ‘fully operational’.

The Prime Minister’s Official Spokesman said today: ‘He is not in Number 10, no.’

Yesterday the spokesman said: ‘He is not back in No10. He is in contact with No 10.’

Mr Cummings went into isolation after it was announced that Mr Johnson had tested positive for coronavirus on Friday March 27.

The Vote Leave maverick was then seen running out of Downing Street with a backpack before subsequently returning to Number 10 on Friday afternoon.

That is the last time he was seen there before it emerged on the following Monday that he had entered self-isolation.

Fears had been expressed by senior MPs early on in the outbreak that Westminster was a ‘hotbed’ of infection.

There were concerns that the disease could rip through the heart of democracy, dramatically impacting the government’s ability to respond to the crisis.