A council fined a highways firm an astonishing £48.5m after the contractor failed to replace two damaged sets of roadside bollards for a year.

Birmingham City Council imposed the penalties on Amey in what has become an increasingly acrimonious battle between the two organisations.

Both parties are locked into a 25-year, £2.7bn contract, which Amey claims both sides want to end, but they have failed to reach an amicable solution to dissolve the agreement.

The staggering bills were clocked up when the highways giant failed to replace each of the two sets of bollards within an hour – triggering an initial £250 penalty clause. 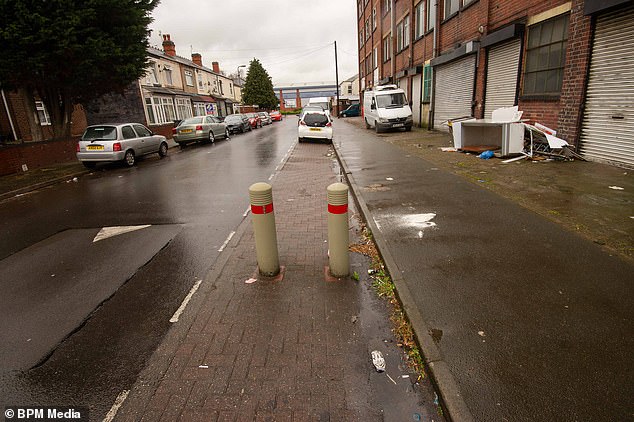 The bollards were installed to prevent cars avoiding speed humps. When they were damaged the council declared the matter an ’emergency’ requiring an urgent response – and increased fines on the contractor every hour until they were carried out 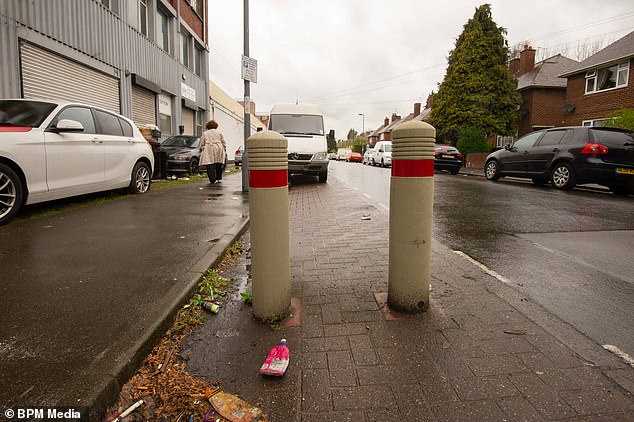 The bollards on Westwood Road in Witton, West Midlands, were installed in a parking bay lane

Westwood Road is a side street in Witton, with houses lining one side of the street and small factory units along the other.

On the factory-side of the street is a ‘third lane’, created for roadside parking for residents.

Dotted along this lane are sets of bollards, which are located alongside speed humps on the road.

They are there so ensure motorists cannot swoop into the parking lane to avoid the humps; and also mean cars can’t park directly alongside the humps. 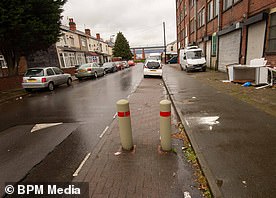 The offending bollards on Westwood Rd

The first of two incidents was in June 2016. A repair was first attempted in August 2017 – over a year later. The repair was finally completed in November 2017.

In January 2017, a second pair of bollards were reported missing. Amey was notified and the repair was listed by them as a non-urgent repair.

It took Amey seven months to first attempt a repair, and then on three separate occasions in August and October workers were unable to carry out repairs because cars were parked across the holes.

The repair was finally done in November 2017, 11 months after the bollards were first reported missing.

The council claimed each incident should have been treated as an ’emergency’ that required a category 1 response.

By the time the work was eventually done, months later, each penalty fee had been increasing hourly – reaching staggering totals of £31 million for one set of bollards and £17.5 million for the other, Birmingham Live reported.

The dispute over the bollards on Westwood Road, Witton, was today highlighted by Amey as an example of the ‘total breakdown’ in relations between the two parties.

The bollards are on a residential road and were installed to prevent speeding. One set were damaged in June 2016 and not repaired until November 2017; the other set disappeared in January 2017 and not replaced for 11 months (see box).

On both occasions Amey had failed to fulfil its contractual obligations to carry out repairs in a timely way.

Birmingham City Council was entitled as a result to instigate penalty fines, which increased hourly. By the time the repairs were done the penalties totalled in excess of £48 million.

Amey argued the loss of the bollards did not cause an urgent hazard, so should have been classed as a non-urgent ‘Category 2’ repair, to be completed within 28 days.

The lengthy delays would still have led to penalty fines – but of a more reasonable £2,500.

It is one of several examples what Amey claims is the council’s ‘unfairness’ towards it.

When workers left cable ties around three lampposts after carrying out repairs, the council triggered another penalty clause for adding unnecessary ‘cosmetics’.

Amey took a long time to remove the cable ties – so ended up with a final notice for £14 million.

Amey claims both sides want the deal to end but said all approaches to the council to reach a resolution have been rejected.

Its most recent offer was for £175 million cash, plus a write-off of fees owed totalling around £70 million – an offer which Amey says is ‘absolutely fair’ but which did not even get a response.

A spokesman for Amey said: ‘We are at a critical point. The contract has not worked for either party.

‘Amey’s value has been written down – it is obviously in the council’s best interests to get another company in.’

The company claims that it is only in Birmingham that such poor relations exist and that it works harmoniously with other councils. 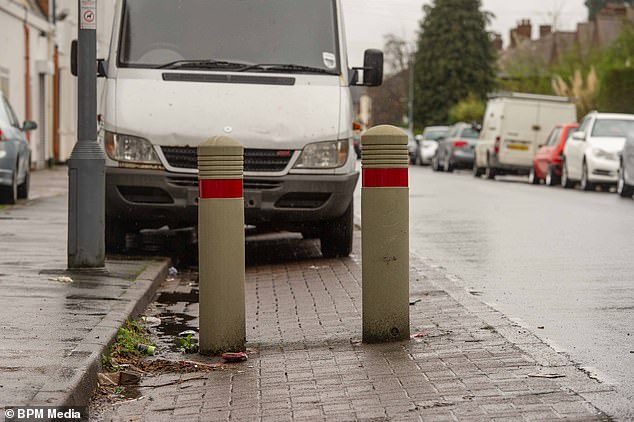 In another example of the council allegedly behaving unfairly towards it, Amey said three cable ties left around a lamp post had earned fines of £14m

A Birmingham City Council spokesman said: ‘We take our responsibilities to manage our contractors seriously and where a contractor is found to be underperforming then we will not hesitate to take appropriate action in order to protect the public purse.

‘The contract was established to make sure that our highway network is kept safe and is maintained.

‘Dangerous issues that are not dealt with by Amey will therefore attract financial adjustments; the longer they are left and the more dangerous they are, the more those adjustments increase.

‘We have managed Amey’s performance in line with the contract, although the statements we have seen regarding these adjustments wildly exaggerate the amounts we have applied.

‘Amey has unfortunately refused to put forward proposals that provide the investment in our roads and pavements that it is contractually required to deliver.

‘In such circumstances the council cannot approve these programmes. This has now been the case for over a year and it is disappointing that Amey does not recognise the damage it is doing by allowing the city’s roads to deteriorate.’

Amey successfully tendered for a PFI-backed contract with Birmingham City Council in 2010 to manage its highways services for 25 years, at a total cost of £2.7 billion.

But the two sides have been at loggerheads since 2014, when the council sued the contractor claiming it had not fulfiled the contract. Birmingham won the case, but the High Court found for Amey, and then the Court of Appealruled again in favour of the council ordering £60m of repayments and reduced PFI payments.

Last year in a withering assessment of Amey’s performance, the city’s then assistant highways boss Kevin Hicks said the authority had spent four years trying to get Amey to make good on its commitments.

In November 2018, it was reported that Amey had failed to comply with a court order demanding a £60 million payment to the council. In its response, Amey said the council had not paid it a single penny throughout 2018 for its work.