The figure is almost £50 million higher than last year and includes £578 million from fees and permits and £376million from fines, according to a report to be published today by the RAC Foundation.

The data, from 353 individual authorities, shows they took £1.66 billion from motorists and spent £793 million on collection, including on wardens’ salaries and administration, leaving the record surplus.

By law, councils have to invest any profit from the charges into improving local transport. A huge proportion of the money goes to subsidising concessionary tickets such as the Freedom Pass for free bus travel for over-60s 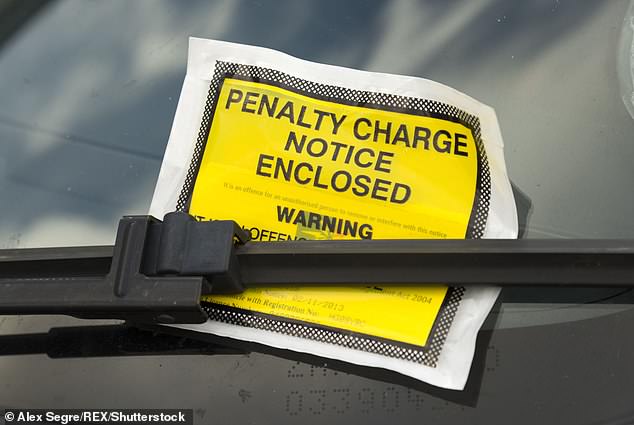 Authorities raked in £1.6 billion last financial year, and after spending £793m on expenses like wardens’ wages came out with a surplus of £867m

A spokesman for motorists’ organisation the AA slammed the record figures, saying: ‘If drivers continue to be hit with hiked parking charges then some will vote with their wheels and start using out-of-town shopping centres or indeed do more shopping on-line.

‘At a time when the high street is under intense pressure, more parking incentives are needed to attract, not deter, potential customers.’

The figures show English councils took more than £1.6 billion in income from on-street and off-street parking and penalties, and spent £793 on infrastructure collection and administration.

London topped the list – 33 councils across the capital generated a profit of almost £1million a day from parking charges and fines handed out to motorists.

The capital’s authorities raked in £589m over the course of a year, and after spending £233.8m on expenses like wardens’ wages came out with a surplus of £361.6m.

That was just under £1m for each 24 hours over the 2016/17 financial year, according to data published by London Councils, which represents all 33 local authorities.

Meanwhile Manchester City Council cleared a £10m profit in 2017/18 and Liverpool made £4m.

An AA spokesman said it was ‘hugely ironic’ that as shops close, councils make more money from parking.

He added that the cost of parking should cover the cost of providing the service, not ‘become a stealth tax paid by a few thousand in each town’.