A Minnesota couple who said ‘I do’ on New Year’s Eve traded champagne for charity on their big day.

Chara Juneau and Adam Claude had been planning on a quickie courthouse wedding this fall when they had a better idea, according to Yahoo Lifestyle.

The couple had spent much of their romance at Feed My Starving Children in Coon Rapids, Minnesota bagging meals for hungry kids, and decided to start off their marriage the same way, encouraging friends and family to join in the selfless fun. 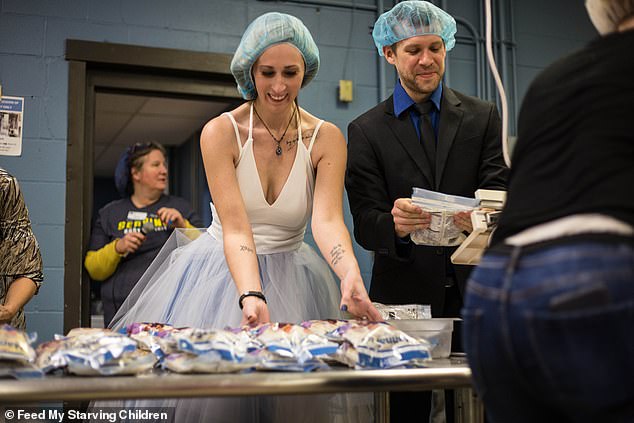 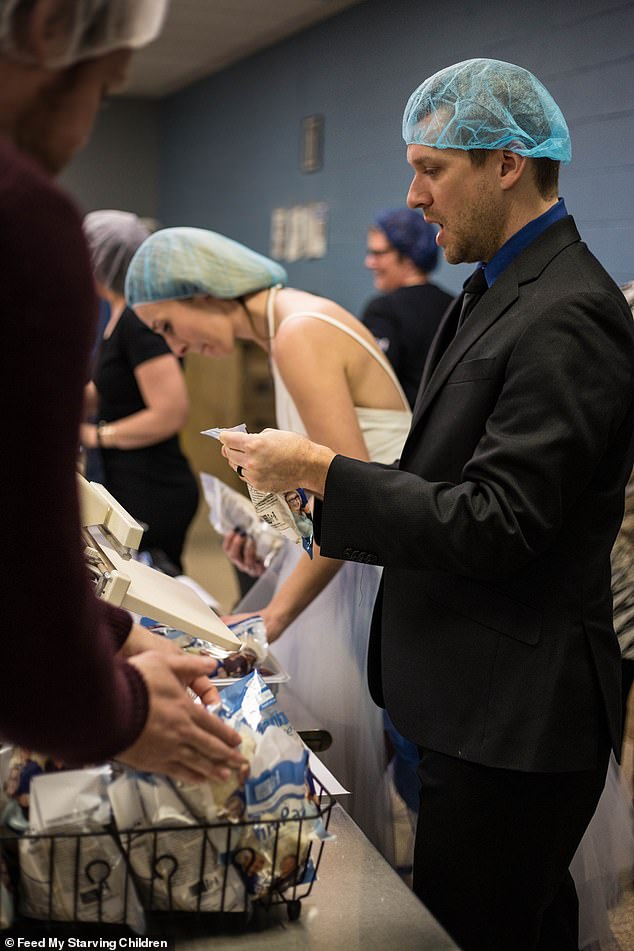 Feast! The Minnesota couple said ‘I do’ and then packed up meals for starving kids with all of their guests 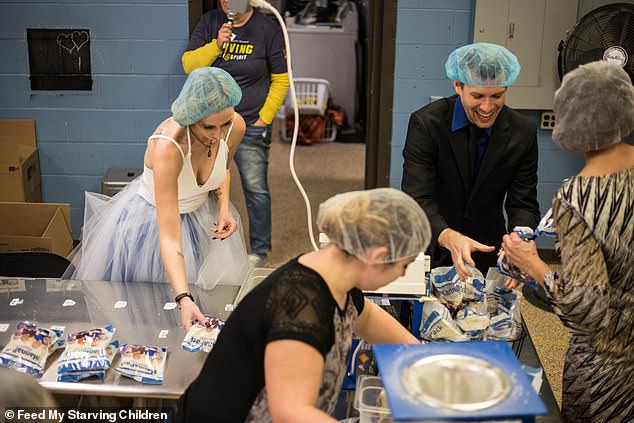 Accessorized and ready to go!The bride even threw a hairnet on with her wedding gown 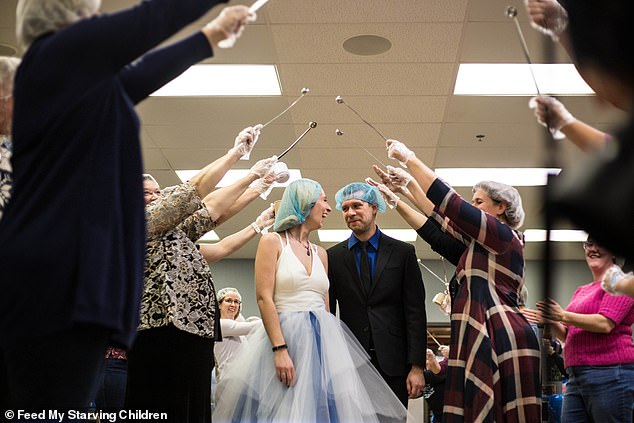 Sweet: Guests jokingly held up ladles for the the newlyweds to walk through

Chara and Adam didn’t exactly meet at Feed My Starving Children — but as Adam likes to say, they did meet because of it.

Adam, an IT consultant, had been working with the organization for years, putting together meal-packing events. Twice a year, he’d organize big ones with more than 150 volunteers at each, using Facebook to bring in people to help.

In 2018, Chara, a wedding photographer, moved to the area. She was invited to a few of Adam’s events by a mutual friend, but couldn’t make them.

That didn’t matter. As it turned out, Adam and Chara attended the same church. One day, Adam noticed her, recognizing her face as one of the people who’d RSVP’ed to his events. 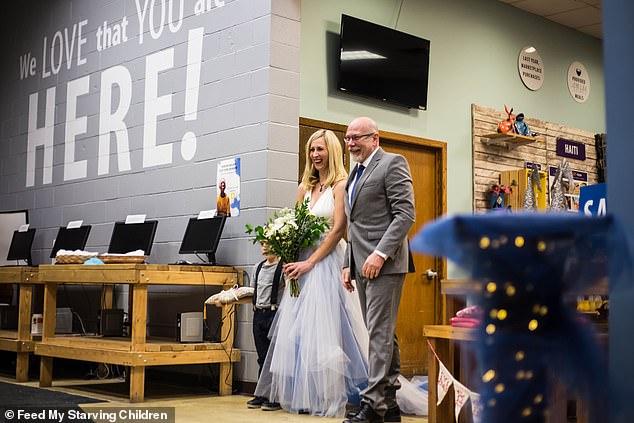 They met through the charity: Adam organized events and noticed Chara after she was invited by a mutual friend 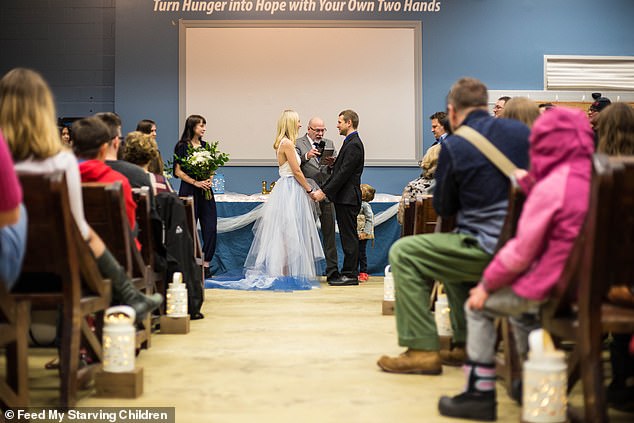 Romance: They’d had several date nights there and even celebrated a Valentine’s Day packing meals 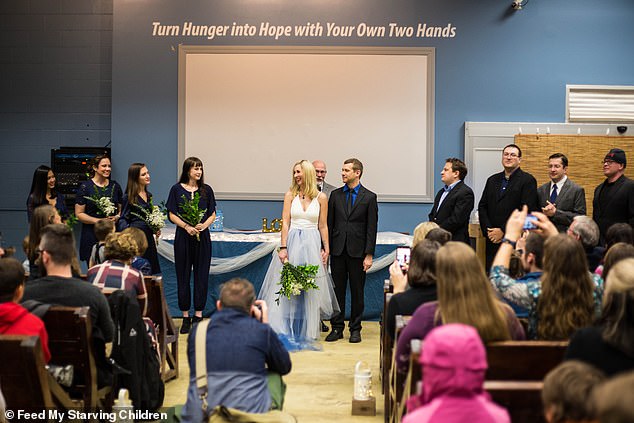 Bright idea: They’d been planning a courthouse wedding when the organization’s director offered the space

The two hit it off, and eventually Chara did come to those meal-packing events. In fact, the pair spent date nights packaging up food for starving children, and even did it on Valentine’s Day.

When it came time to tie the knot, the couple wanted to keep it inexpensive and low-key. They had been planning a quick courthouse ceremony when Judy Watke, the director of development for Feed My Starving Children, suggested they use the organization’s headquarters instead.

So, they invited 70 guests to watch them exchange vows — and then had them join in to pack food for kids in Sierra Leone. The party managed to put together 22,000 meals by night’s end, enough to feed 60 kids for a year. 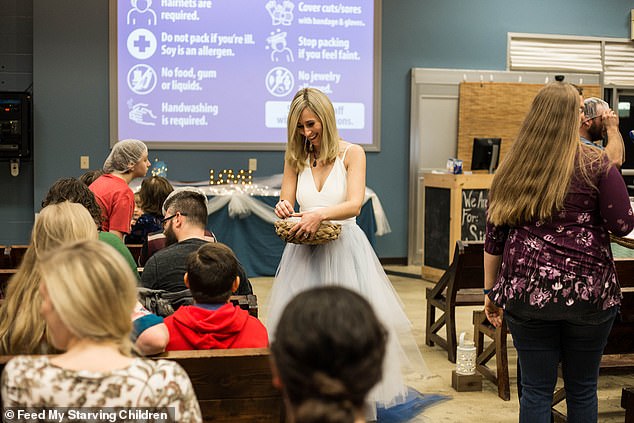 Doing good: They invited 70 guests and had them help pack food and donate to the cause 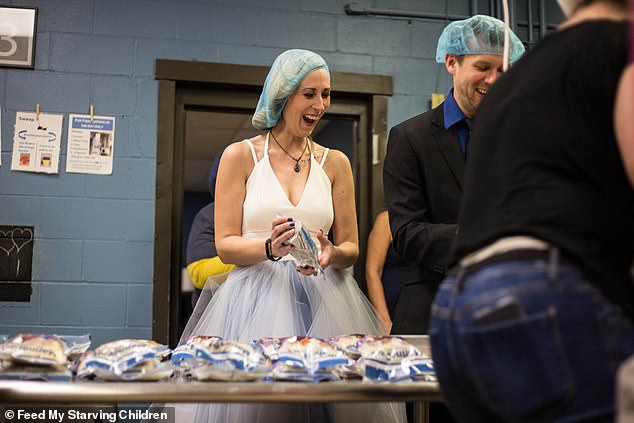 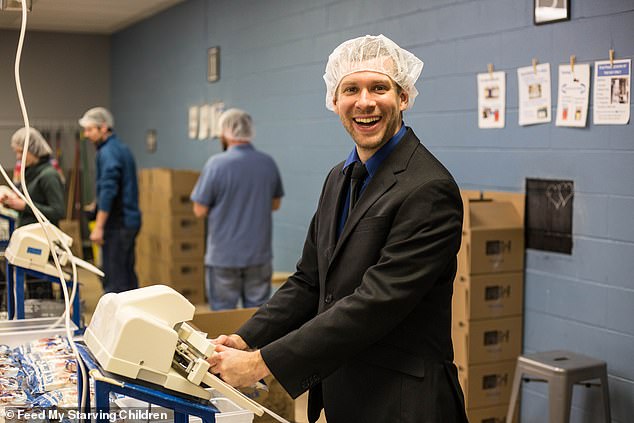 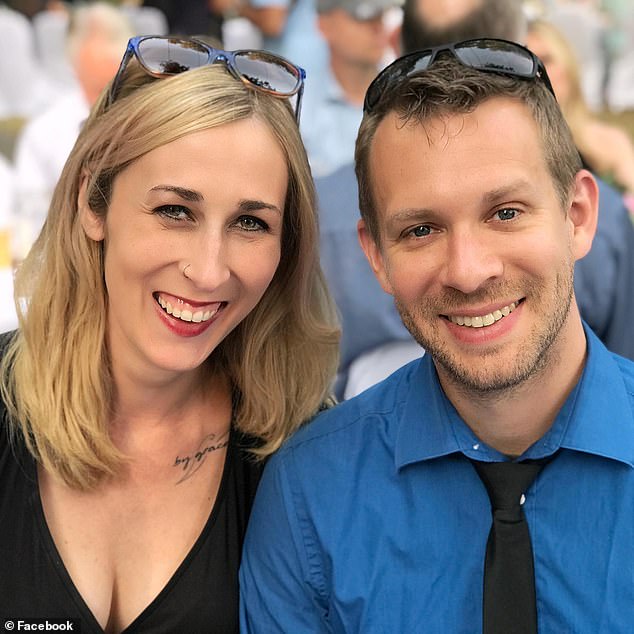 Now, they’re off on their honeymoon, a trip Adam bid on at a charity auction in November

To that end, they set up a wedding fundraiser called Let’s Feed Kids, and invited guests to donate. So far, they’ve raised over $100,000 — in part thanks to strangers who read their story and decided to pitch in.

Now, they’re off on their honeymoon, and unsurprisingly, it had a charitable element as well: Adam bid on the trip to the Virgin Islands at a charity auction in November.

Travel agencies face legal action after blocking up to £7billion of refunds for cancelled holidays
Heathrow announces plan for up to 68 more take-offs and landings a DAY
Brain-damaged Tafida Raqeeb flies to Italy with family for treatment after winning High Court battle
Tate Modern pusher 'was scarily intelligent mental patient who had slipped away from his minders'
Woman, 73, 'beat her longtime 82-year-old friend to death with a brick' at senior living facility
Jonathan Nguyen shares pictures of his age-defying mother
Corbyn escapes punishment over claims he failed to declare a trip to terrorists' graveyard
Texas man saves a Pomeranian dog from being strangled by an elevator after the door shuts on leash