Crowds have started to arrive at the Cenotaph in London this morning to pay their respects to the war dead this Remembrance Sunday.

The Royal Family will lead tributes and Prince Charles is set to lay a wreath of poppies on behalf of the Queen, followed by his two sons, William and Harry.

Leaders from across the political spectrum will also be in attendance, with both Boris Johnson and Jeremy Corbyn taking a break from campaigning to attend the Whitehall memorial.

The first to arrive this morning included new Speaker of the House of Commons Sir Lindsay Hoyle with his wife Catherine Swindley, as well as Nicky Morgan and her husband Jonathan and SNP Westminster leader Ian Blackford.

Following the service, around 10,000 veterans will march past the war memorial, including World War Two veteran Ron Freer.

Crowds have started to gather at the Cenotaph in London this morning. A two minute silence will be held across the country at 11am 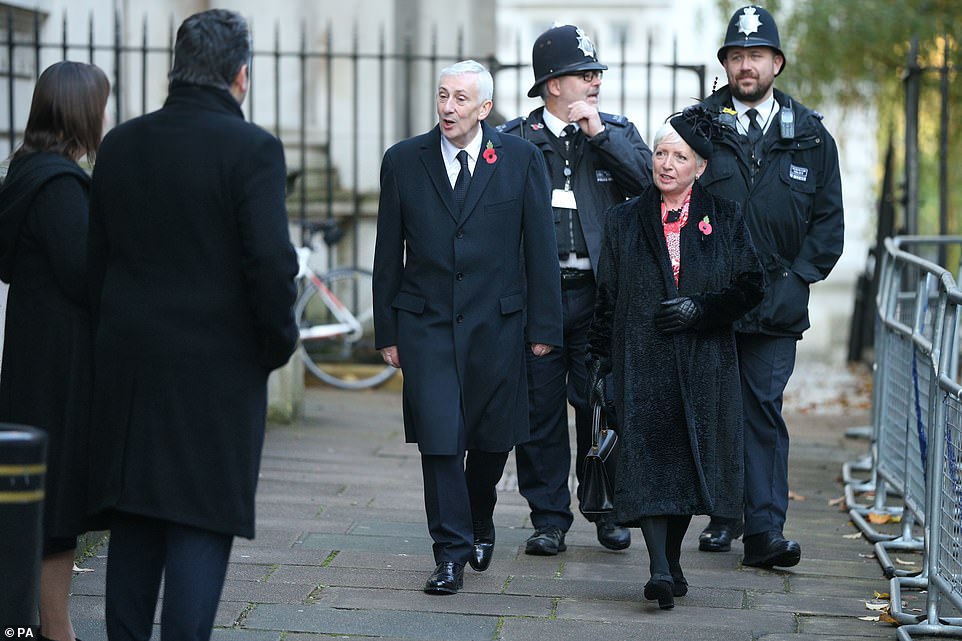 New Speaker of the House of Commons, Sir Lindsay Hoyle and wife Catherine Swindley in Downing Street arriving for the Remembrance Sunday service 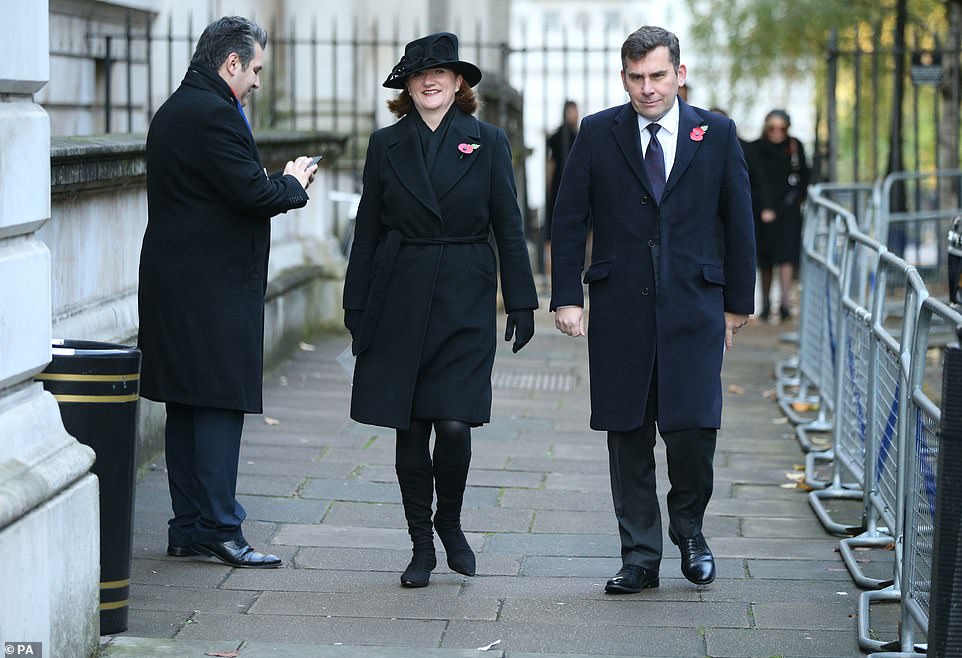 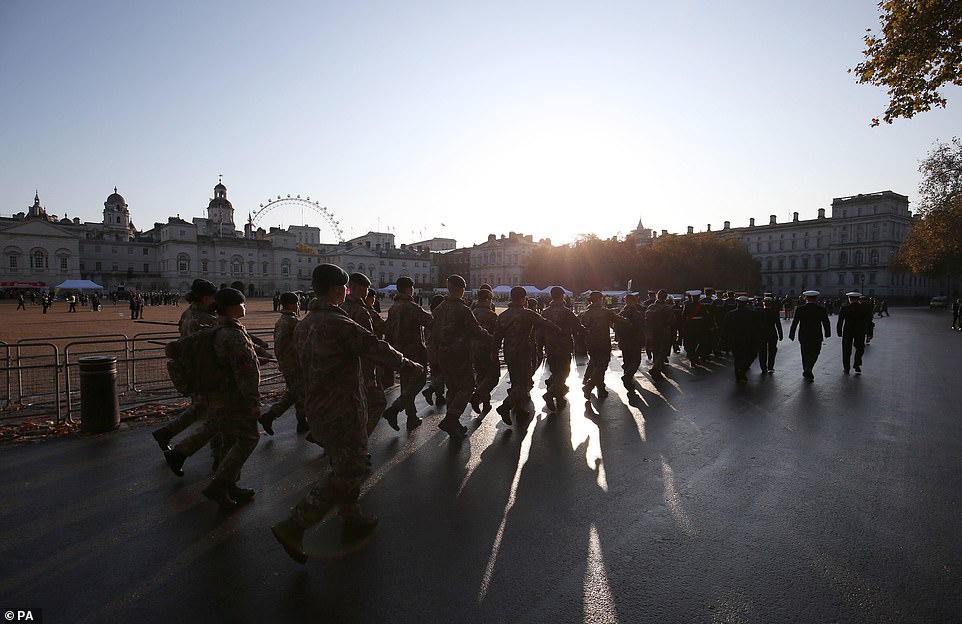 Cadets in Horse Guards Parade get into position (pictured above) ahead of the service. They were pictured in uniform this morning 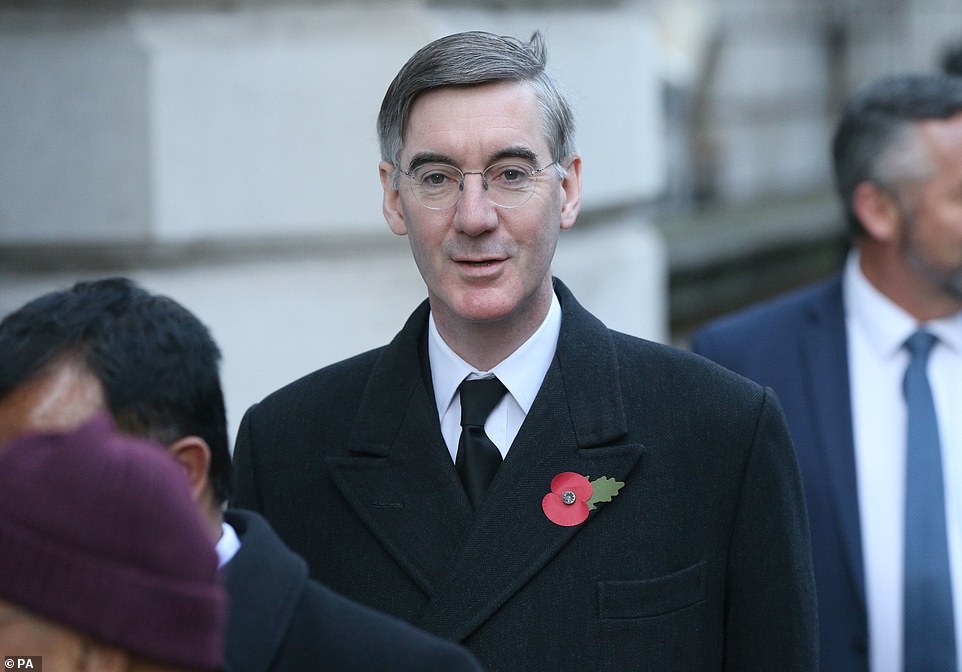 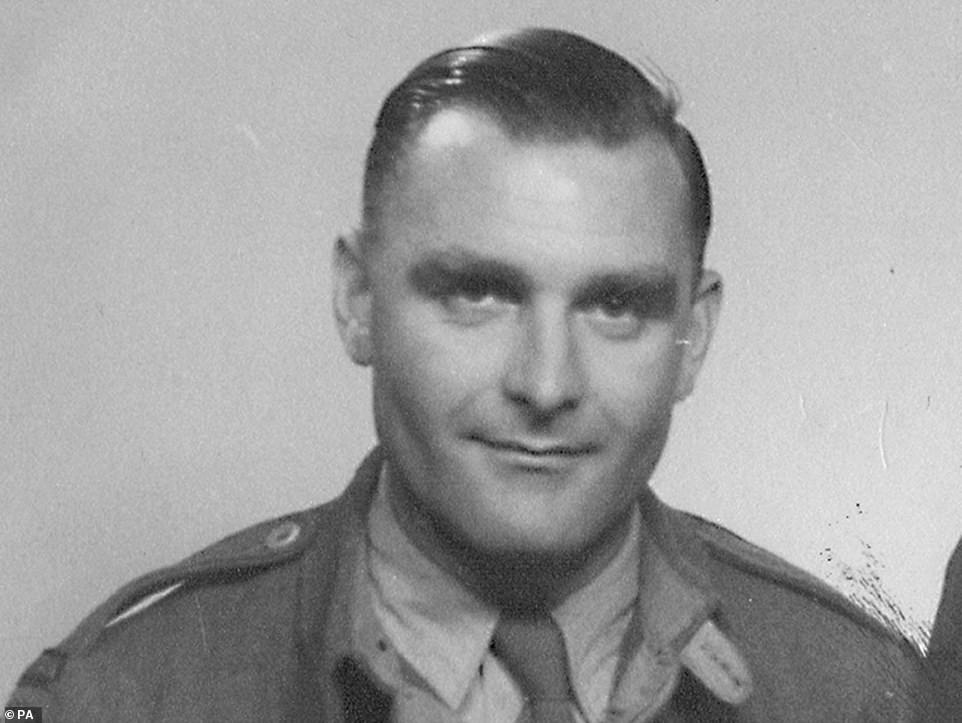 The 104-year-old, who is blind, will be the oldest hero to be marching at the Cenotaph this year, along with his comrades.

This year’s service marks 100 years since the first two-minute silence was observed on 11 November 1919 on Armistice Day.

It will also be the first year that both civilian victims or both war and terror attacks, will be remembered under the same service.

Ahead of the service, Cadets on Horse Guard Parade, next to St James’ Park, were also seen getting into position for the commemorations.

They were in full uniform and were seen walking in unison this morning as gazebos were pitched on the parade in preparation for the people expected to attend the service. 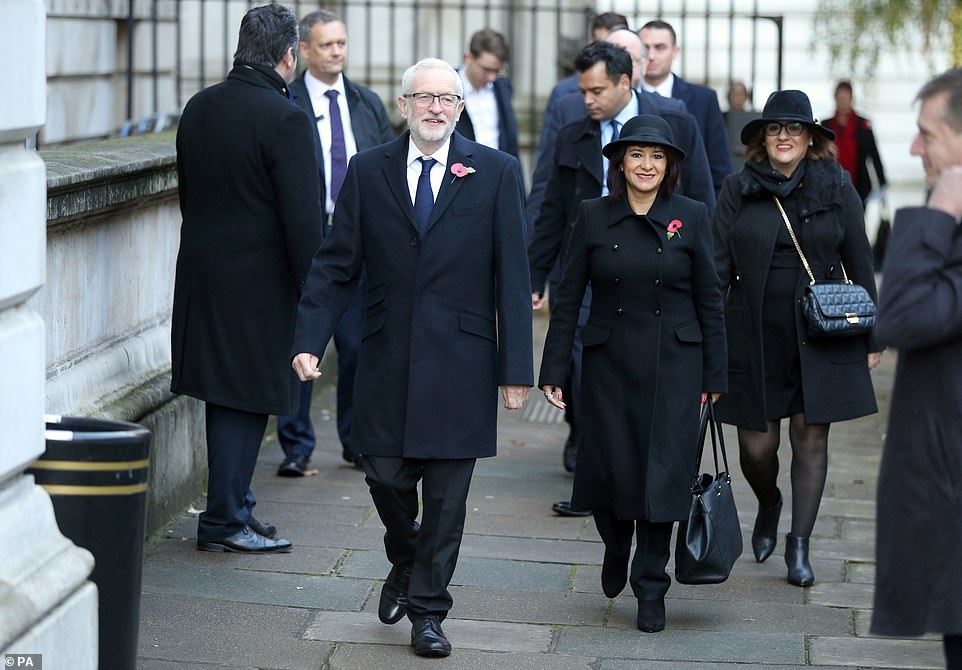 Labour Party leader Jeremy Corbyn with his wife Laura Alvarez (pictured together above) smiled as they arrived for the service. This morning Mr Corbyn had posted a video on Twitter paying his respects to service personnel 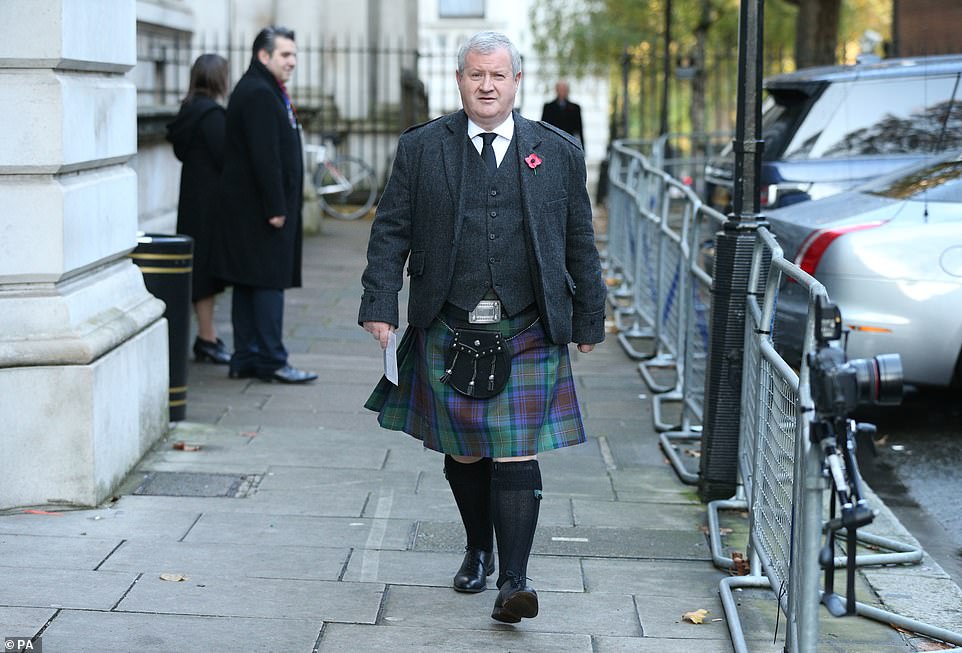 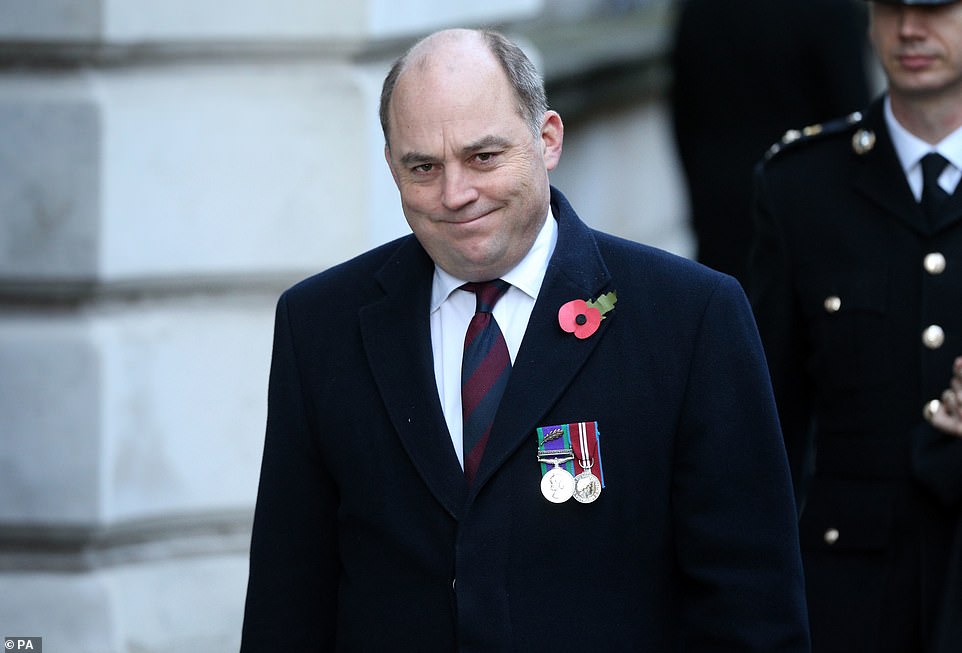 Defence Secretary Ben Wallace (pictured above) smiled as he arrived this morning. He had pinned two medals to his coat as well as his poppy 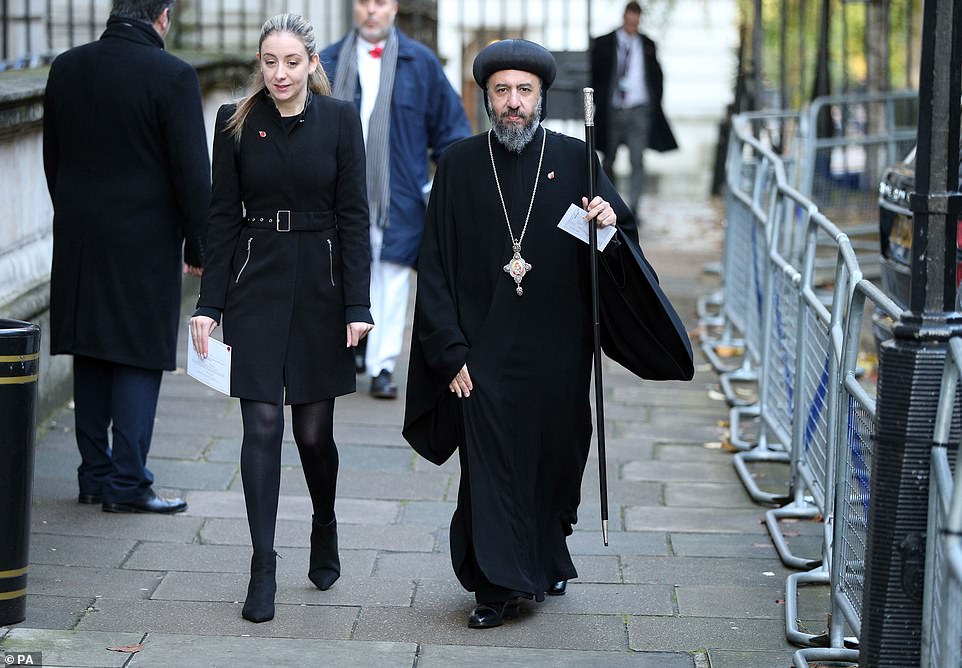 Archbishop Angeaelos, Coptic Orthodox Archbishop of London (pictured above) was also in attendance today for the service which will be followed by over 10,000 veterans marching 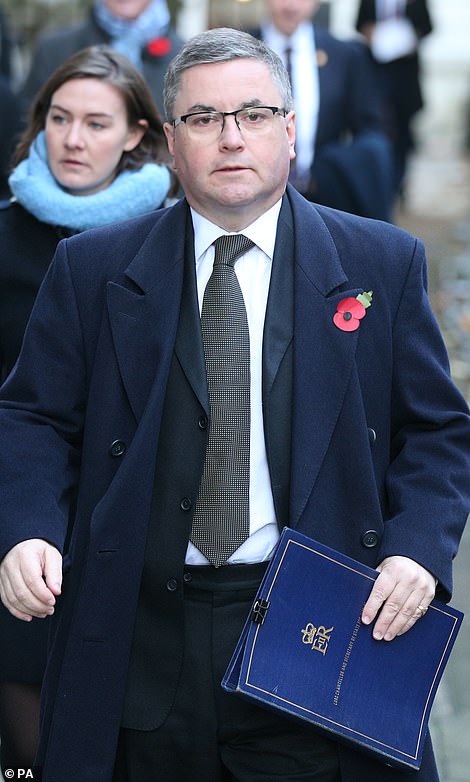 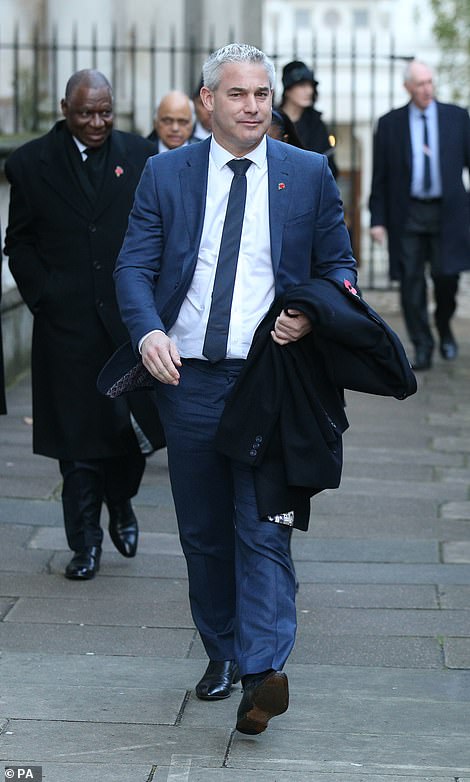 Politicians such as Exiting the European Union Secretary Stephen Barclay (right) were at the service, as well as Lord Chancellor Robert Buckland (left)

As Big Ben strikes 11am, a two minutes silence will be observed, with its beginning and end marked by the firing of a gun by the King’s Troop Royal Horse Artillery.

Buglers of the Royal Marines will sound the Last Post before wreaths are laid at the Cenotaph by members of the royal family, politicians, foreign representatives and senior armed forces personnel.

The Prince of Wales will lay the first wreath on behalf of the Queen, who will watch the service from a nearby balcony.

An equerry is due to lay a wreath for the Duke of Edinburgh who is not expected to be present after retiring from royal duties two years ago.

The Duke of Cambridge and the Duke of Sussex will follow their father in laying wreaths, while their wives will also watch the ceremony from balconies. 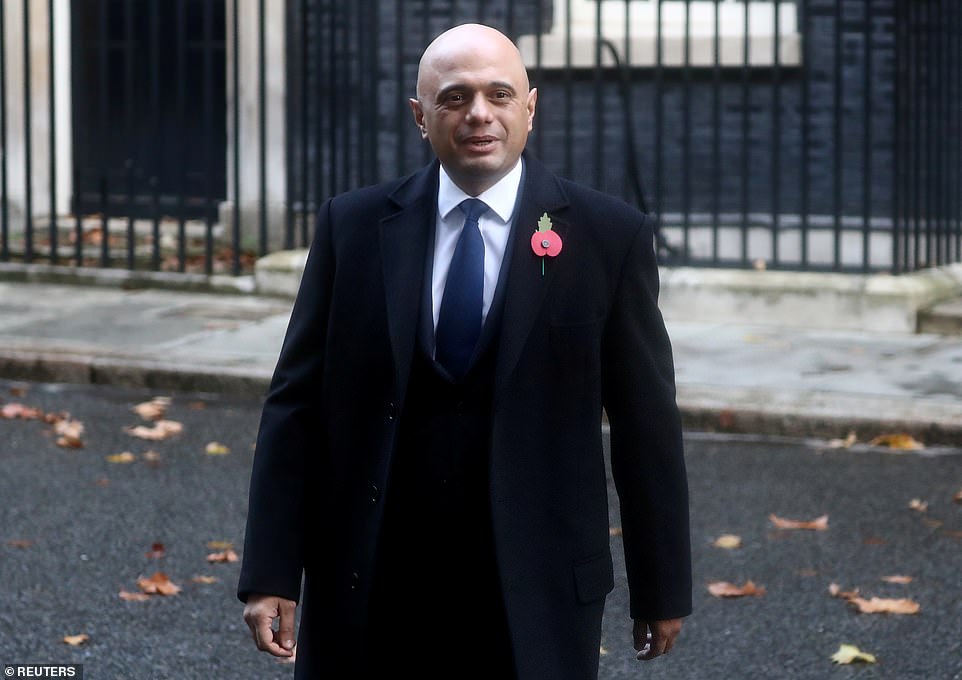 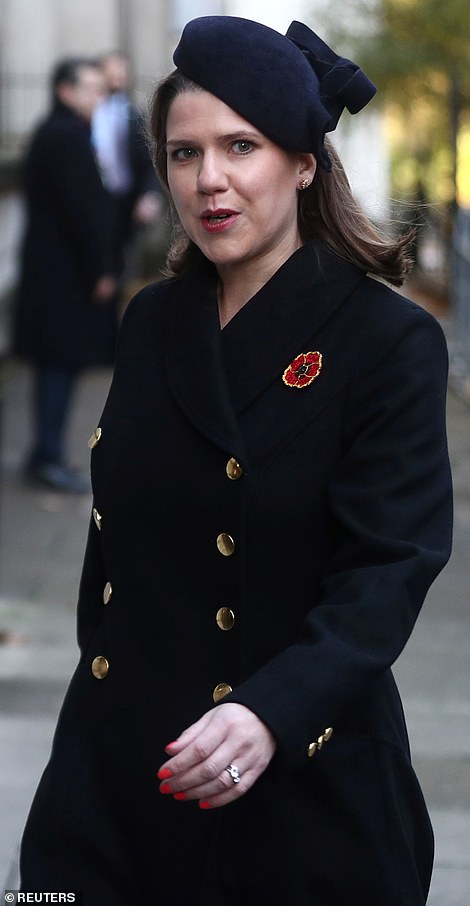 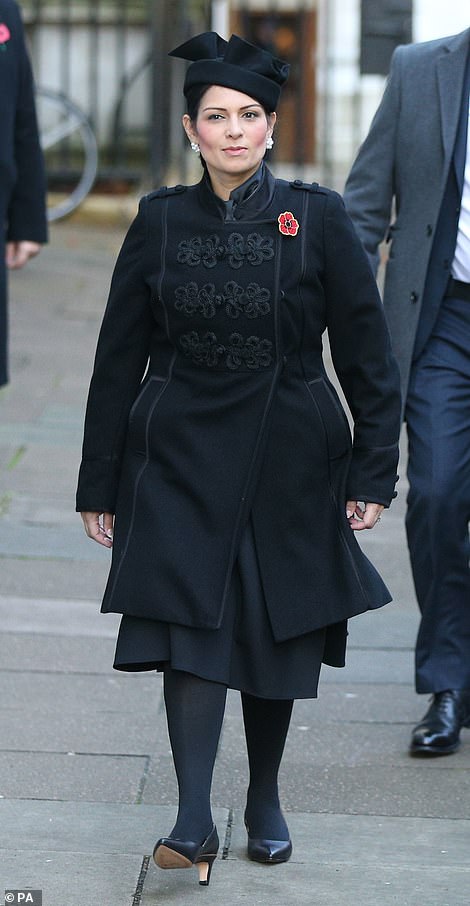 Five former prime ministers – Sir John Major, Tony Blair, Gordon Brown, David Cameron and Theresa May – are also due to be in attendance.

After wreaths are laid, the Bishop of London, Dame Sarah Mullally, will lead a service of remembrance which will end with trumpeters of the Royal Air Force sounding Rouse (Reveille).

Following the ceremony, thousands of veterans and servicemen and women will march past the Cenotaph to pay their respects to those killed in past and present conflicts.

Before the ceremony many took to social media to pay their tributes, including Mr Corbyn who paid tribute to past and present Armed Forces.

In a video posted to Twitter he said: ‘We remember the many brave people from Britain and all across the world who put their lives on the line making huge sacrifices in two world wars which cost the lives of millions, and in all other conflicts since.

‘And we stand together to say: Never again.’