D-DAY heroes today wept for their mates gunned down on the beaches of Normandy as the world paid tribute 75 years on from the Allied invasion of France.

Some of the last surviving veterans from Operational Overlord shed heartbroken tears at memorial services on both sides of the English Channel for comrades who fell on June 6, 1944.

A lone piper plays on the Mulberry harbour at Arromanches in Normandy, in northern France, as British Army personnel mark the exact moment the first British soldier landed on Gold Beach 75 years ago[/caption]

Jimmy Ockendon, 97, wept as he remembered those who lost their lives on D-Day during an emotional memorial service in Portsmouth.

Mr Ockendon said: “It was very emotional, the main person I was thinking of was my uncle who went on the Hood, his wife had died just beforehand and he left two young children and my father and mother adopted them.

“I was also thinking of my father.”

In one of her last official engagements as Conservative leader, Theresa May attended an inauguration ceremony in Normandy for a memorial to over 20,000 members of the British armed forces who died there decades ago.

The British Normandy Memorial is being built on a hillside in Ver-sur-Mer, overlooking Gold Beach, one of the key sites for British troops during the Normandy Landings.

Today’s anniversary could well be the last time veterans of the D-Day landings gather in Normandy for a major commemorative event.

Speaking to D-Day veterans today, Mrs May said: “If one day can be said to have determined the fate of generations to come, in France, in Britain, in Europe and in the world, that day was the 6 June 1944.

“Over a quarter of a million more supported operations from air and sea, while the French Resistance carried out extraordinary acts of bravery from behind enemy lines.

“Many were terribly wounded, and many made the ultimate sacrifice that day, and in the fierce sacrifice that followed, as together our Allied nations sought to release Europe from the grip of fascism.” 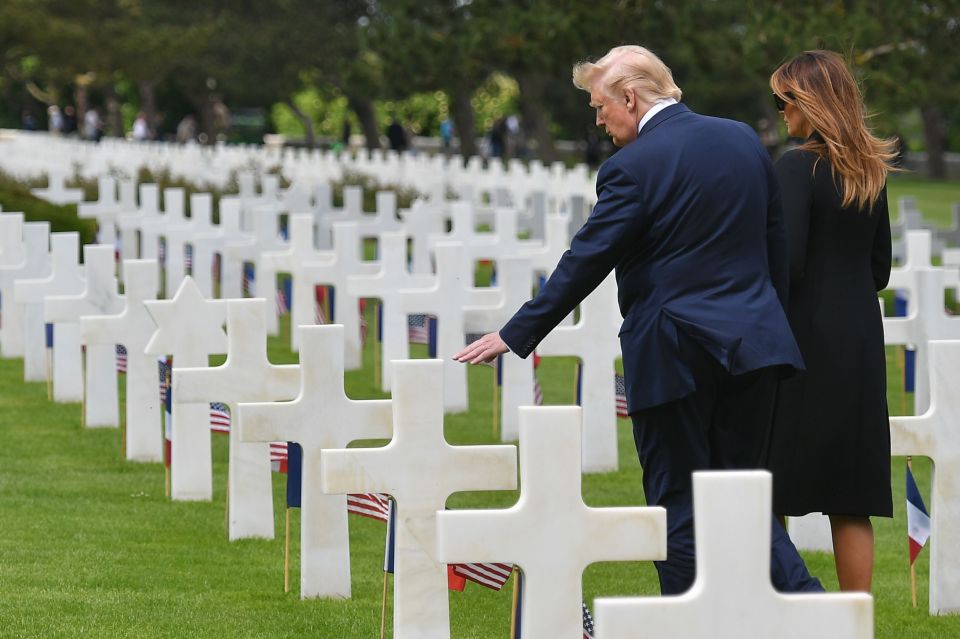 The Prime Minister read the names of several British troops who were killed during the D-Day landings and the Battle of Normandy.

She said: “These young men belonged to a very special generation, the greatest generation.

“A generation whose incomparable spirit shaped our postwar world.

Speaking of the names on the new memorial, she added: “We will always remember their courage and convictions.

“To our veterans I want to say the only words we can: thank you.”

Mrs May’s respectful and solemn tribute was echoed by D-Day veteran Kenneth Hay, who read from the poem Normandy by Cyril Crain, who also took part in the Allied invasion.

The poem, read in the Bayeux Cathedral today, begins: “Come and stand in memory of men who fought and died.

“They gave their lives in Normandy, remember them with pride.”

Crain landed at Juno Beach in June 1944, four days before his 21st birthday. 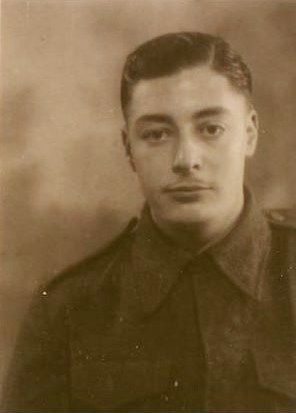 Dring the service in Bayeux Cathedral today, veteran Kenneth Hay, who was only 18 when he fought on D-Day, read from the poem Normandy by Cyril Crain, who was also part of the Allied invasion.

Come and stand in memory

Of men who fought and died.

They gave their lives in Normandy,

Remember them with pride.

Who in civvy life were tailors

and men who worked machines.
British and Canadian

And men from USA

Forces from the Commonwealth

They all were there that day
To Juno, Sword and Utah

That’s where the ramps went down.

The battle raged in Normandy

Many lives were lost

The war must end in victory

And this must be the cost
When my life is over

And I reach the other side

I’ll meet my friends from Normandy

And shake their hands with pride.

Earlier, French President Emmanuel Macron joined the Prime Minister at the inauguration ceremony, where a sculpture created by David Williams-Ellis was unveiled marking the beginning of construction for the memorial.

Expected to be completed within a year, it will record the names of 22,442 members of the British armed forces who died in the D-Day landings and Battle of Normandy.

President Macron said: “I am honoured to stand alongside Theresa May today to launch construction work for the British memorial at Ver-sur-Mer.

“The British people have long dreamt of this memorial.”

Mr Macron said the monument would also be a symbol of the ties binding France and the UK.

He said: “Nothing will break them. Nothing can ever break ties that have been bound in bloodshed and shared values.

“The debates taking place today cannot affect the strength of our joint history and our shared future.”

Normandy veteran and patron of The Normandy Trust George Batts told the crowd: “They were the soldiers of democracy.

“They were the men of D-Day and to them we owe our freedom.”

After the memorial inauguration, Theresa May joined veterans and the Prince of Wales at a cathedral service in Bayeux.

The city, close to the northern French coast, was the first major place to be liberated after the Allied forces invasion.

Following the service, veterans will parade from the cathedral to the Commonwealth War Graves cemetery.

Dignitaries will be invited to lay memorial wreaths and the last post will be played at the site where more than 4,000 war dead are buried.

Today's commemorations could be the last major anniversary of the D-Day landings attended by the heroes who faced Nazi gunfire on the beaches of Normandy in the summer of 1944. Here are some of their astonishing recollections of D-Day.

Ron Tungatt knew he had a crucial role in the engine room of landing vessel 419 in 1944.
He needed to keep the engines running so the troops and military hardware on board could be landed quickly and safely on Sword beach.
It’s what he’d trained for and he was ready. But, he admits, he was scared too.
Today he said: “My last thought before I went to sleep was ‘will I see daylight again?’ I prayed hard.
“I feel quite proud, I suppose.
“When you got to shore, the thought was always there that you could hit a land mine, or get bombed or shelled.
“But we got through it. And I think ours was a lucky ship. We went to the heart of the action and came through with barely a scratch.”

As a 21-year-old, Pixie Jenkins, who was in Women’s Royal Naval Service, helped drive troops and equipment to Newhaven Docks in East Sussex in the the build-up to D-Day and throughout the Normandy landings.
Now 100 years old, Pixie said today: “I think the men that went over were wonderful and I hope the younger people today realise how fortunate they are to have people like that.
“I think so many youngsters today have forgotten about the men.
“They look at them and think ‘they’re old men now’ – to them they’re just old men.
“And they’re not, they are wonderful, wonderful men that went over.

Ernest Green, 93, and Robert Barnett, 93, were both on HMS Redpole when it sailed to Juno Beach on June 6 1944.
Both men became emotional describing their starkest memory of D-Day – having to watch on as they saw Canadian troops killed in the water before them.
They were both manning guns on the ship, protecting the landing craft from air and sea attacks.
Mr Green, his voice cracking, said: “To see the chaps who were dead in the water.
“I’m sorry, I get emotional when I think of it.”
Mr Barnett nodded as he continued: “We couldn’t do anything.”

Sid Barnes, 93, from Norfolk, served in the Royal Army Service Corps and landed on beach by Arromanches on June 6.
He returns every year to the town and attends commemoration events.
Mr Barnes said: “People are coming up to us to say thank you. But I think ‘thank you for what?’
“We just did what we knew we must do. It is nice to know we are valued though.
“It’s nice to take part to be here but it’s very difficult as you remember the others who died.”

‘GAVE US OUR FREEDOM’

At the start of the service, a message on behalf of Pope Francis was read by Cardinal Marc Ouellet.

He said D-Day was “decisive in the fight against Nazi barbarism” and paid tribute to those who “joined the Army and gave their lives for freedom and peace”.

The great grandson of wartime prime minister Winston Churchill, Randolph Churchill, has also paid tribute to those who took part in the D-Day landings.

“It’s remarkable to think that 75 years ago the heroes that gave us our freedom were coming up these shores,” he told ITV’s Good Morning Britain.

“They really did give their today so we can have a better tomorrow.”

They were reunited for the first time in 70 years to sail from Portsmouth to Normandy for the anniversary on Wednesday.

Both men became emotional describing their starkest memory of D-Day – having to watch on as they saw Canadian troops killed in the water before them.

They were both manning guns on the ship, protecting the landing craft from air and sea attacks.

Mr Green, his voice cracking, said: “To see the chaps who were dead in the water.

“I’m sorry, I get emotional when I think of it.”

Mr Barnett nodded as he continued: “We couldn’t do anything.

As they parted to go to dinner on Wednesday night, Mr Green kissed Mr Barnett’s wife Martha Barnett on the cheek and told her: “Look after him for me.”

The day began at 6.26am with the haunting sound of a lone piper playing — marking the moment the first British soldier stormed the beaches of Normandy.

After his bagpipe performance on Arromanches beach, Pipe Major Macey-Lillie said: “That was nerve wracking to do but I feel very proud and it was a privilege to do it.”

Some 300 plus veterans will be flocking to the town of Arromanches for a series of events today to mark the 75th anniversary of D-Day today.

This signals the minute the invasion began and the moment the first British soldier landed on Gold Beach.

Stood atop the structure, Pipe Major Trevor Macey-Lillie, of 19th Regiment Royal Artillery (The Scottish Gunners) performed Highland Laddie as crowds gathered on the beach below him and lined the promenade, applauding his performance.

The same tune was played by piper Bill Millin, who performed as his comrades were cut down around him on Sword Beach in 1944.

‘KIDS COULD HAVE DIED’

Woman 'strangled swan to death in public park after straddling it'

Across the Channel, a service of remembrance and wreath laying takes place at the National Memorial Arboretum in Alrewas, Staffordshire.

In Portsmouth, following President Donald Trump’s visit on Wednesday, a veteran’s parade will take place before a memorial service at the city’s D-Day Stone.

And in London, the Duke of Sussex will attend Founder’s Day at the Royal Hospital Chelsea where he will see the Chelsea Pensioners and six veterans from the Normandy Landings.

Dawn breaking over Gold Beach in Normandy this morning[/caption]

Image of Jesus up a tree draws crowds of praying worshippers despite coronavirus lockdown in Colombi...
Palace sign Sao Paulo goalkeeper Lucas Perri on loan after Julian Speroni’s nightmare at Liverpool
Love Island stars go wild at boozy wrap party as Amber and Belle twerk and down cocktails
Chris Brown is going to be a dad again as it’s revealed his ex-girlfriend is pregnant with his baby
Skint Arsenal told to fork out £13.5m transfer fee by PSG for Christopher Nkunku as RB Leipzig also ...
Spice Girls make triumphant return at Dublin’s Croke Park performing set list packed with their top ...
15,000 ISIS prisoners will be SET FREE ‘if Turkey follows through on threat’
Gibraltar raid sees Royal Marines seize supertanker ‘taking Iranian oil to Syria in breach of sancti...