A D-Day veteran brought the nation to tears this morning as he broke down on live television, recalling the death of friends in the Second World War.

Ted Cordery, 91, was interviewed by GMB hosts Kate Garraway and Charlotte Hawkins about his time on the HMS Belfast during the Normandy landings.

The brave former seaman who was just 18 during the terrifying conflict was tasked with bringing injured men from the beaches onto the HMS Belfast.

He said: ‘Well just the captain told us we were going there and we opened fire at 6am in the morning.

‘It was a gunnery exercise and I’m a torpedoman…

‘I was a crane driver and I was up the crane.

‘These wounded soldiers could have been wounded a mile or two miles inland. They were put on a cart brought down to the beach, then put on a pallet.

Through tears he continued: ‘When I landed those men on there…

‘The wounds were terrible. Terrible. Most of them never made it. They were taken to sick bays where most of them died.

‘(It) Annoys me when most films are bang bang bang about war and you never see the real side.

‘I lost many friends since the war ended I lost ship mates who I served with. I’ve seen their ashes go over the side of the Belfast.

‘It’s such a waste of young life. I try to imagine how they suffered from a mile inland until they were lifted on the ship.

‘You couldn’t have worse.’

Ten thousand allied troops were wounded or killed on June 6, 1944.

Ted began trending on Twitter as viewers ‘sobbed’ at home watching the man they called a ‘true hero’.

One woman wrote: ‘Just watching a Ted Cordery on @GMB he may not feel a hero but he is! So much love and respect. thank you Sir.’

Another added: ‘What a man just dont know what to say other than thank you very much sir ‘Ted Cordery’.

Another user wrote: ‘It’s plain and simple, Ted Cordery you’re a hero. I will be thinking of you and the others who lost their lives when I go to Normandy in October. Thank you for all that you did and continue to do.’

A woman named Victoria said: ‘Powerful & emotional interview with Ted Cordery, the D-Day Veteran telling his story on GMB this morning. What a warm, courageous & dignified gentleman. We owe such a lot to men like him.’

But Mr Cordery said he does not see himself as a hero.

He said: ‘When you join the service you’re part of them you do as you’re told.

‘You get on with it. I don’t necessarily agree with that (hero comments).

‘I’m not a hero they’re the heroes. 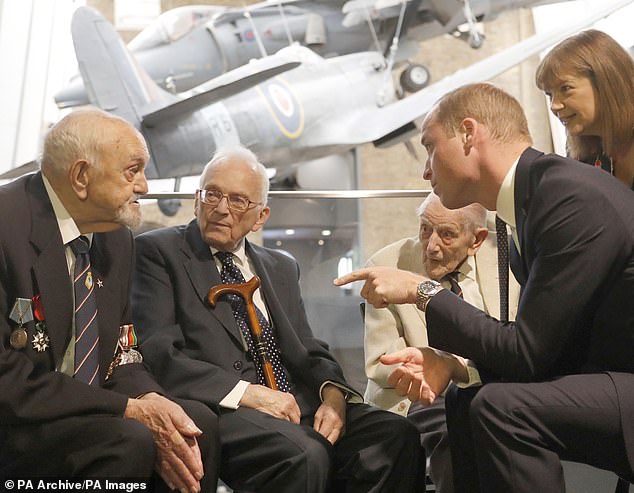 The Royal British Legion is taking 300 veterans and carers over to Normandy on a specially chartered ship for the 75th anniversary of D-Day.

The voyage will take veterans who helped liberate France during the Second World War, plus a relative or carer, to a series of commemorative events on both sides of the Channel at no cost to them.

The journey is being funded by the Royal British Legion’s LIBOR grant, in conjunction with the Ministry of Defence and Arena Travel.

The vessel will depart from Dover on June 2, taking in the UK commemorative events in Portsmouth and Poole before crossing the English Channel and arriving in Normandy, on 6th June, exactly 75 years after the D-Day Landings.

Mr Cordery said: ‘I feel very very grateful to the British Legion for the opportunity.

‘When the good lady gave me the opportunity to go I grabbed it with both hands.

‘I appreciate it very much indeed.

‘I’d like to go back and stand and remember

– There are still places for Normandy Vets to go over. For more information click here.

Woman killed in France as driver accelerates as demonstrators block roads over fuel tax rise
Petra Ecclestone sells largest home in Los Angeles for a record £95m
Priyanka Chopra and Nick Jonas swamped by security as they arrive in Jodhpur for their wedding
Hundreds gather at Ground Zero to commemorate the 18th anniversary of 9/11 that took 2,983 lives
How Stonehenge's 'bluestones' were quarried in 3000 BC
The Bachelorette's Ali blames ex Grant Kemp for their split after bombshell texts
Theresa May promises a 'new chapter' in her New Year message
Prince Edward joined by his wife Sophie and their children for Christmas Day church service