Topless Page 3 models could have finally disappeared from mainstream national newspapers after the Daily Star published its last edition of the controversial feature.

The Sun stopped showing topless Page 3 models in 2015 after high-profile campaigns such as No More Page 3.

Government ministers branded the feature as ‘old-fashioned sexism’ at the time.

As of 2015 the Star has been the only mainstream national paper to still picture topless women.

But since the April 1 edition the models pictured on Page 3 have been covered up, ending the 50-year tradition in Fleet Street of publishing naked breasts.

Ellie, 23, from Hertfordshire, could be the final topless model in a national newspaper if the Star keeps its new policy. 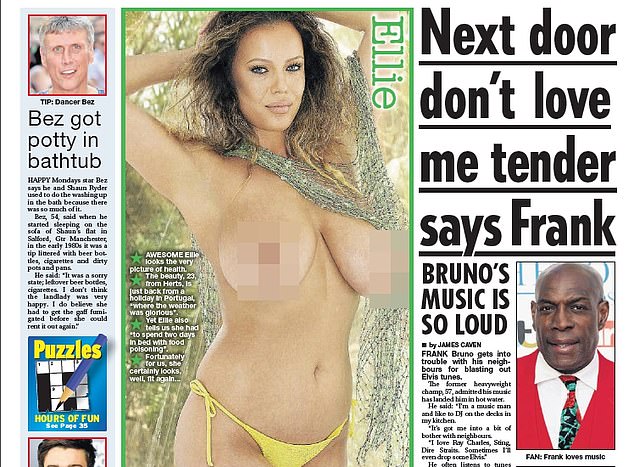 Could this be the last topless Page 3 at the Daily Star? Ellie, 23, from Hertfordshire, pictured in the April 1 edition could be the last in mainstream national newspaper

A source close to the Star said the change came due to a shift in tastes as ‘times change’.

The new policy will not see scantily-clad women removed entirely from the paper, but will see them merely covered up.

The source told MailOnline: ‘The move has been considered for some time.

‘Topless girls were phased out in certain regions over several weeks and the last one appeared last week.

‘Page 3 girls have been an important part of the Daily Star for decades but times and tastes change.

‘We’ll still have women on Page 3, they will just now be tastefully covered up.’

Editor of the Daily Star Jonathan Clark told MailOnline the change was due to feedback and was merely a trial to gauge the reader’s response. 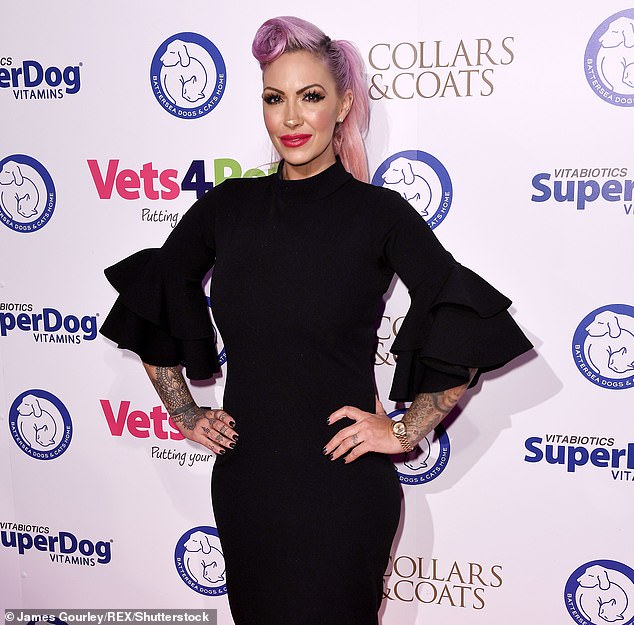 Jodie Marsh, who featured in Page 3 during its hay day, said she ‘never felt exploited – in fact the opposite’, when it was axed by the Sun in 2015

He said in a statement: ‘The Daily Star is always looking to try new things and improve.

‘In that spirit, we’ve listened to reader feedback and are currently trialling a covered-up version of Page 3.’

But a source at the Star believes the controversial feature is unlikely to return, adding, ‘never say never but I’m not expecting to see it back’.

Then-Education Secretary Nicky Morgan, who also held the women and equalities brief, said in 2015 that the move was ‘long overdue’.

At the time the Star said it was ‘proud’ to continue its Page 3, which it added ‘brightens the day’ for readers.

Harriet Harman, who was Shadow culture secretary at the time, said the move means The Sun is ‘moving into the 21st century’.

The Girlguiding UK’s Advocates panel said Page 3 is ‘disrespectful and embarrassing’ and that they are ‘thrilled’ it was being dropped.

But the news also sparked an angry backlash from glamour models, who branded anti-Page 3 campaigners ‘no bra-wearing, man-haters’ and said the move would put women out of work.

Page 3 pin-up turned bodybuilder Jodie Marsh, 36, hit out at the move in a series of angry tweets, saying she ‘never felt exploited – in fact the opposite’.

When the Sun axed Page 3 its rival the Mirror mockingly published a ‘whole montage’ of blue tits, great tits and coal tits.

Meghan wears a Givenchy coat and dress and a Noel Stewart hat as she appears at Trooping the Colour
Man, 20, is arrested after a 36-year-old woman is murdered outside a shopping centre
Labour leader Corbyn has a face like thunder as he slams car door and blanks beaming Boris
Supreme Court: Trump can't deny asylum to illegals who enter between official border crossings
Death toll from coronavirus rises to 426 as officials confirm more than 20,000 people have illness
Kobe Bryant mourned: Stars honor the legend after he was killed in a helicopter crash
Schoolgirl, 13, who hanged herself after fleeing home was 'lively' in lessons
Woman, 30, falls to her death from a 100ft high tower block window 'after being held by her HAIR'