A man died as a result of a rare freak accident after eating a hot fish cake that left him unable to breathe, an inquest heard.

Darren Hickey, 51, had recovered from a stroke that left him struggling to walk and talk seven years before his death.

On April 4 he was leaving the wedding venue he managed in Chorley, Lancashire, when one of the chefs asked him to try a fish cake.

It burned the back of his throat causing his voice box to swell, which meant he was soon unable to breathe.

He was taken to hospital but given paracetamol and told to return if the pain got worse. Mr Hickey died in hospital the next day. 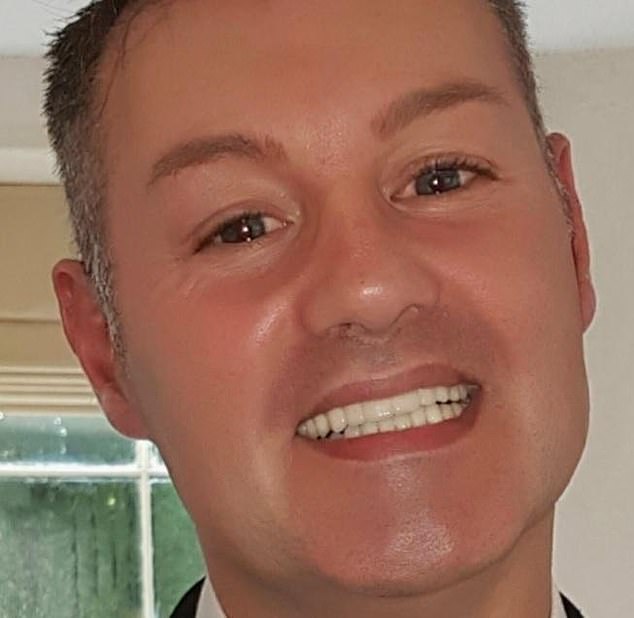 Darren Hickey, 51, died as a result of a rare freak accident after eating a hot fish cake that left him unable to breathe

‘Basically, we normally see this scenario in people who are involved in house fires with inhalation of smoke which burns the airways or in industrial accidents with hot steam.

‘The patient can appear well, they will be talking to you, but then the swelling starts.’

Acting senior coroner Alan Walsh heard how Mr Hickey had visited the Urgent Care ward at Chorley Hospital after complaining to his partner Neil Parkinson of pain in his throat on the afternoon of April 4.

But, partly because of the rarity of the injury, he was sent home with paracetamol and advice to return if the pain increased.

The swelling in Mr Hickey’s throat continued to get worse and after returning to Ridgmont House he tried to go to his room and rest.

Unfortunately, at around 9.45pm, Mr Parkinson heard his partner making noises and found him appearing to choke.

He told the inquest: ‘He shouted so I ran upstairs. He was stood up choking and coughing so I banged his back but then he slid forward onto the floor.’

An ambulance was called, but was delayed for around five minutes due a problem with the postcode of the building.

Paramedics treated Mr Hickey at the scene and rushed him to the Royal Bolton Hospital but he was pronounced dead in the early hours of April 5.

The inquest heard the delay in the ambulance was unlikely to have contributed to Mr Hickey’s death.

The horrific incident happened seven years after he suffered a massive stroke which left him in hospital for 18 months, and some difficulty walking and speaking.

Despite this setback, Mr Hickey channelled much of his energy into charity work was handed the Inspirational Person of Courage Award by the Stroke Association.

‘He was enormously positive and enormously caring and gave to charity – he was a very generous, caring and compassionate man,’ Mr Walsh said.

‘He was a remarkably strong and resilient man to overcome that stroke.’

The coroner went on to say that the case had raised questions about the care at Chorley Hospital’s Urgent Care ward, which is run by GTD Healthcare as an extra unit to take pressure away from the Accident and Emergency Department.

Mr Hickey had been seen by a practitioner in this ward who also contacted a specialist from the Ear, Nose and Throat unit at Preston Hospital.

But because of a number of unusual circumstances surrounding the case, including the lack of burns to Mr Hickey’s mouth and tongue, they were unable to find the damage, which occurred far enough down his throat that it could not be seen without specialist equipment.

Samuel Eaton, head of services for GTD in the region, and Matthew Gaunt, from NHS Greater Preston Clinical Commissioning Group, assured the coroner that a full review into the incident would be carried out.

Recording a verdict of accidental death, Mr Walsh said: ‘I believe there are enormous lessons to be learned.

‘This was caused by eating a fishcake, very small and very hot but with catastrophic consequences. I find this an immense tragedy.’