David Cameron said he and his wife Samantha found it ‘shocking’ when they heard daughter Nancy, now 15, say the ‘f-word’ for the first time.

It was in response to a pupil who swore at her at a school fair when she said she was backing Remain during the 2016 referendum.

Mr Cameron said his eldest children, Nancy and Elwen, 13, were ‘so engaged’ in the campaign for Britain to stay in the EU and were ‘so supportive’ to him and Mrs Cameron. 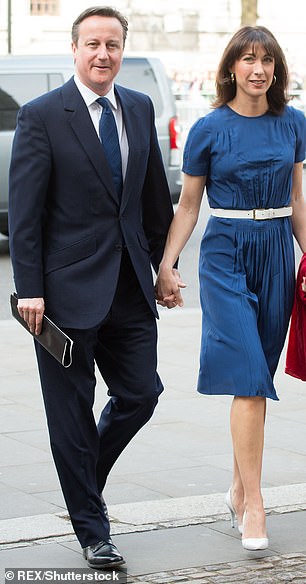 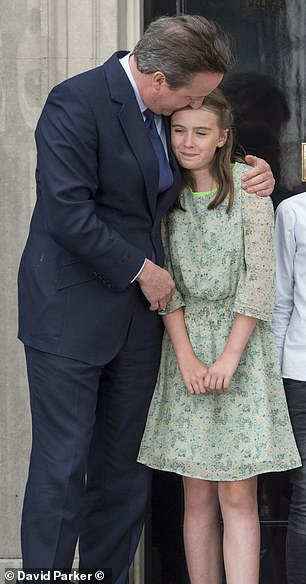 David Cameron said he and his wife Samantha found it ‘shocking’ when they heard daughter Nancy (right), 15, say the ‘f-word’ for the first time during the 2016 EU referendum campaign

The former Prime Minister was writing in his autobiography, which is being serialised by the Times.

In one section of the book, Mr Cameron explained how he and Mrs Cameron heard the little girl, who would have been only 12 in 2016, swear when she was herself insulted by another pupil.

He wrote: ‘There had been a contretemps between her and a bigger girl at the school fair, who had asked if she was for “out” or for “in”. Nancy replied she was for in. The girl said, “Well, f*** you.”‘

Mr Cameron, who resigned after Britain voted to leave the EU, added: ‘Sam and I had never heard her say the f-word. We thought it was a bit shocking, but rather extraordinary.’

He also wrote that his daughter had been handing out ‘Conservative in’ campaign badges and giving them to her friends in an effort to persuade them to back the side which her father had campaigned for as PM. 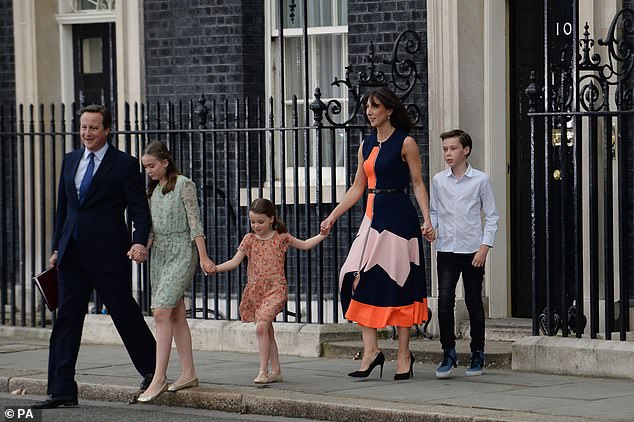 Mr Cameron resigned as Prime Minister following the 2016 referendum after Britain voted to leave the EU. Above: Mr Cameron stepped down as PM

Also in the book are his explosive opinions about former close friend Michael Gove, who famously fronted the Leave campaign, and Prime Minister Boris Johnson.

Breaking his silence three years after he resigned, the former prime minister accused the pair of acting ‘appallingly’ and ‘trashing the government’.

He said they ‘left the truth at home’ with claims that EU membership cost £350million a week and that Turkey would join the bloc.

Mr Cameron also accused Mr Johnson of blundering in his short time at No 10.

He cited ‘sharp practices’ such as the decision to prorogue Parliament, and condemned the expulsion of 21 rebel Tory MPs.

Despite the Government saying Britain must be prepared for a No Deal Brexit, he said he opposed leaving without an agreement.

Bronze £300,000 statue of Margaret Thatcher will be erected in her home town Grantham after rows
Genetically engineered 'designer' baby revolution 'could be less than two years away'
Saudi Arabia will seek support in dispute with Iran over oil field drone strikes
Labour urges Government to publish exit strategy this week
Expert reveals that the royal baby will bring a huge boost to the UK economy
British Airways starts cancelling hundreds of flights ahead of next strike by pilots
Brexit will only be delayed if May can pass deal next week, says EU's Tusk
Sophie Gradon's family say Love Island star DIDN'T kill herself