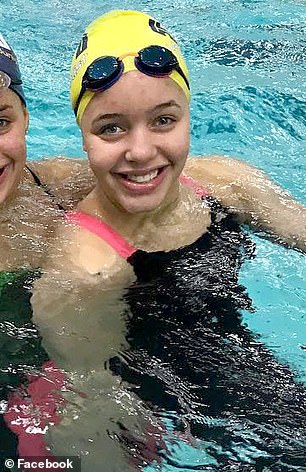 The controversial decision to disqualify a champion 17-year-old swimmer because her school-issued bathing suit showed too much buttocks has now been overturned.

Willis was wearing her standard school-issued swimsuit at the time.

The disqualification prompted outrage as coaches branded the decision ‘sexist’ given the teenager has a curvier physique than her teammates wearing the same swimsuit.

Her coach and team immediately appealed the decision, which prompted the Anchorage School District to launch an investigation.

The district found that Willis was discriminated against for how the swimsuit happened to fit her body and urged the Alaska School Activities Association to revoke her disqualification.

The association revealed on Tuesday night that they would be restoring all points to Willis and the Dimond High School for her win.

They said the official who disqualified Willis was required to notify her coach of any violations prior to racing.

Instead, Willis was disqualified after her race, which the association said was a ‘misapplication of the rule’.

The school district went a step further calling for the official to be de-certified and for the coverage rule to be suspended and revised. 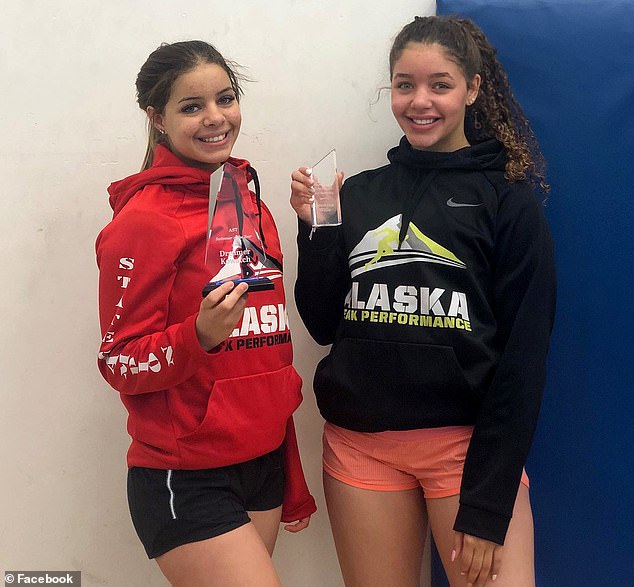 The disqualification prompted outrage as coaches branded the decision ‘sexist’ given the teenager has a curvier physique than her teammates wearing the same swimsuit. Willis (right) is pictured above with her sister and fellow swimmer Dreamer Kowatch (left) 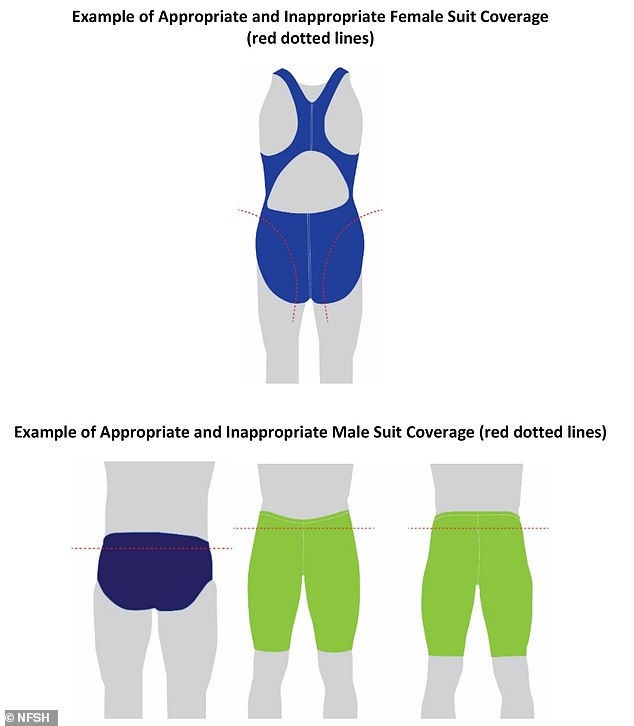 Willis was wearing the approved, school-issued swimsuit at the time of her race. Officials with the Alaska School Activities Association have released graphics to show suits deemed appropriate for athletes

‘The Anchorage School District has concluded that our swimmer was targeted based solely on how a standard, school-issued uniform happened to fit the shape of her body,’ the district said.

‘We cannot tolerate discrimination of any kind and certainly not based on body shape.

‘This disqualification was heavy-handed and unnecessary.’

Willis had worn the same swimsuit at three prior meets this season and had not faced any issues.

The official who disqualified Willis last week has previously criticized her sister Dreamer Kowatch and the fit of her swimsuit during the 2018-19 school year.

Another official at the event said the referee claimed she could see ‘butt cheek touching butt cheek’ on Willis’ uniform.

In a statement prior to the decision being reversed, the school district had said: ‘The disqualification appears to stem from a difference of opinion in the interpretation of the rules governing high school swim uniforms.

‘The Dimond swim team has purchased approved, team suits for every swimmer that meet the requirements put forth by the National Federation of State High School Associations (NFSH).

‘The disqualified athlete was wearing the approved, school-issued suit during the race. In the first three meets this year, the Dimond swim team has had no disqualifications related to the wear of the swim uniform. 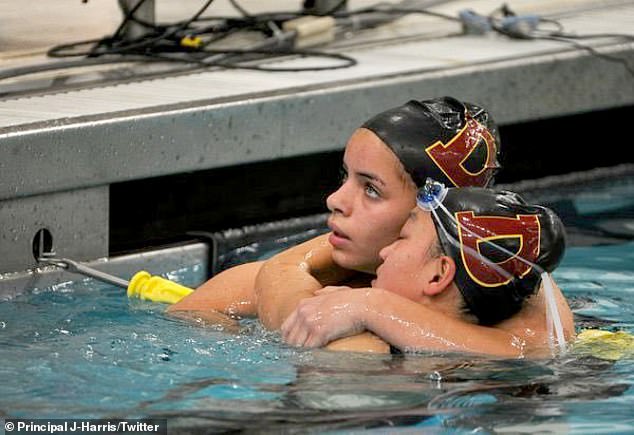 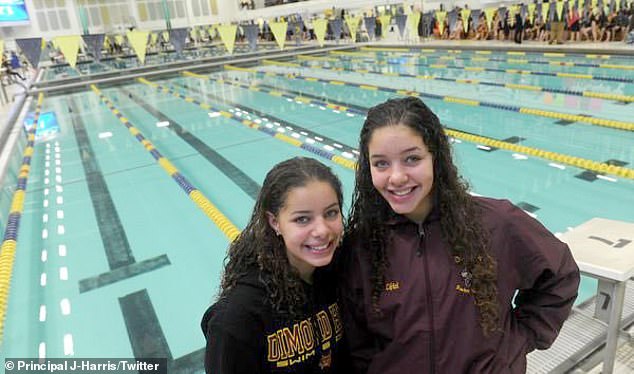 The coach of another school district, Lauren Langford, penned a scathing Medium post after the disqualification saying that Willis was ‘targeted for the way the suits fit a curvier, and fuller figured body’.

Langford, who coaches the West High School swim team, said: ‘The rest of her team was wearing the same uniform, and she was the only one disqualified.

‘It is my opinion that she has been targeted and singled out over the course of the last year. It comes down in my opinion to the race thing. It was so targeted. It was so intentional, and so individual.

‘She’s one of three girls on the Dimond team who look like her. Everybody else is in same suit, sized to fit, and yet on a team of however many girls she was the only one that got singled out?

‘I was filled with so much anguish over the way these young girls have been forced to suffer.’

She later told The Washington Post: ‘All of these girls are all wearing suits that are cut the same way. And the only girl who gets disqualified is a mixed-race girl with rounder, curvier features.’ 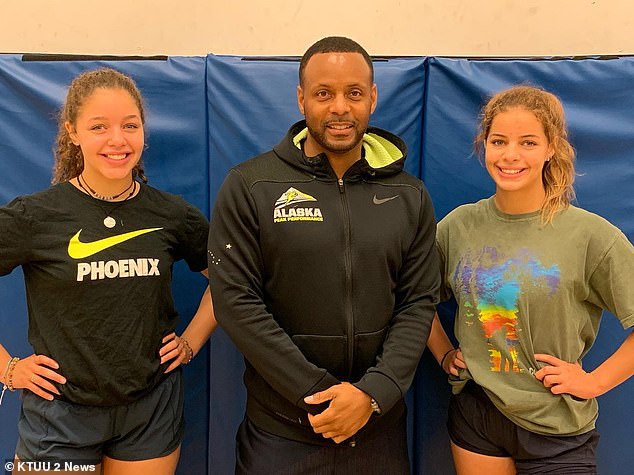 Breckynn Willis, 17, left, was told she had been disqualified from the race in Anchorage, Alaska, after crushing the competition in the 100m freestyle last Friday. She is pictured with her coach DeWayne Ingram and sister Dreamer Kowatch 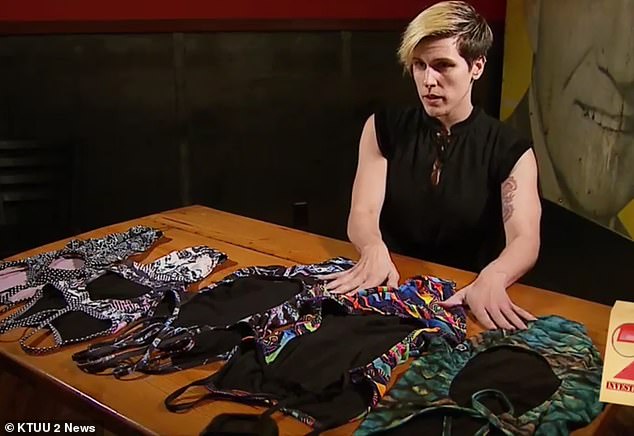 The coach of another school district, Lauren Langford, penned a scathing Medium post after the disqualification saying that Willis was ‘targeted for the way the suits fit a curvier, and fuller figured body’. She is pictured showing off cuts of standard racing swimwear

The girl’s coach, DeWayne Ingram, shared Langford’s blog on Facebook, writing: ‘This is an absolute disgrace and something must be done to rectify it ASAP! I can personally attest that these are absolutely remarkable, upstanding, intelligent, driven, academically solid and highly talented student-athletes that do not deserve this-at all.’

The NFHS issued new guidelines in August saying that an athlete wearing a uniform not within the rules could be disqualified.

NFHS Executive Director Karissa Niehoff wrote in August: ‘There is a growing trend in high school swimming and diving of athletes wearing training and competitive suits in a manner that contradicts with the intention of their original design and manufacture.

‘Specifically, suits are being worn in such a way as to expose the athlete’s buttocks. This issue is not gender-specific and is occurring in various states across the country.’

Jamie and Rebekah Vardy fail in bid to trademark phrase 'Chat s***, get banged'
Man 'looking like a mummy' is rescued after spending a MONTH in a bear den in Russia
Murder probe is launched after ‘man in his 50s is shot dead in broad daylight in Kent street’
Toddler 'was born with BACKWARDS LEGS' due to a one-in-a-million birth defect
Boris Johnson and his very busy love life
Trump UK visit: Theresa May welcomes President plus Melania and Ivanka
Protestors from north and south join forces to demonstrate against a hard Irish border after Brexit
Beto O'Rourke celebrates first debate against Ted Cruz by AIR DRUMMING to The Who as he grabs food