Too many students with very low grades are being allowed to go to university, a schools minister has warned.

Lord Agnew said it was ‘madness’ that students with only three E grades at A-level are being accepted on to degree courses.

He hit out at supporters of the practice, saying they only hold that view because they do not have to ‘pick up the tab’.

His comments will raise eyebrows as it is the first time a government minister has been so vocal on the issue. 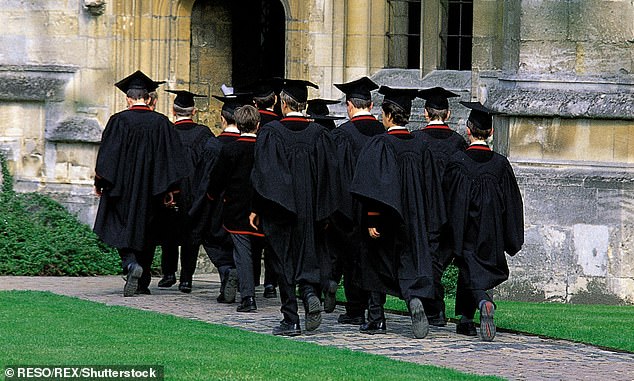 In December, it was revealed that the Government is thinking of tackling low entry requirements by denying student loans to youngsters with lower than three D grades.

Speaking at a conference at Brighton College yesterday, Lord Agnew said that every week he is confronted in the House of Lords by people wanting to lower standards.

He said: ‘Why are we letting kids go to universities with three Es at A-level? I mean, why? It’s a lunacy.’ He added: ‘Unfortunately there is a body of people who believe that because they never have to pick up the tab for the results of that kind of madness.’

Data from the Higher Education Statistics Agency (HESA) for 2017 entrants shows 2,905 teenagers aged 19 or younger were admitted to universities with less than three E grades.

Fall in students at top universities

Figures reveal that Southampton saw the biggest reduction of 29 per cent from 2015 to 2018 followed by Sheffield (10.8 per cent) and Manchester (9.7 per cent). They are all Russell Group universities which have the highest entry standards.

The statistics, published by Times Higher Education, showed Exeter increased students by 16 per cent. Southampton insisted its reduction was on purpose to ‘raise quality’ while Sheffield said it wanted to reduce numbers to ‘maintain rigorous standards’. Manchester blamed Brexit and a ‘change in demographics’.

While this only represented 1 per cent of the total for that year, some universities admitted much larger proportions. The University of Bedfordshire, a former polytechnic which is ranked 118th in the country by the Complete University Guide, had the highest proportion – 15 per cent.

A spokesman for the university said: ‘We are a proudly widening access to university. Our own internal analysis of students who enter with three Ds has found, with the right support and guidance, they achieve very similar success as their peers with better A-Level grades.

‘We believe to restrict access to university… would be socially regressive and harm social mobility.’

However, critics have said students with very low grades are unlikely to be suited to academic study and may struggle with courses.

In addition, if they do not perform well in the job market when they leave, they are never able to earn enough to pay back their student loans.

Loans are written off after 30 years, meaning the taxpayer is subsidising the degrees of people who achieve less financially when they leave.