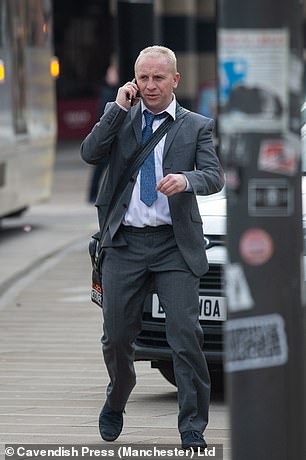 A doctor who attacked police during a violent struggle in a bistro after a cocaine and alcohol binge that ‘blew his socks off’ is to keep his job.

Dr Brendan Sweeney was arrested after he hurled foul mouth abuse and gritted his teeth whilst white powder could be seen on his nose.

Onlookers at the restaurant were said to be ‘visibly shocked and shaken’ as the 35-year-old fought with officers and protested ‘I’m not drunk’, before kicking the door of a police van as he was escorted outside.

Sweeney, who will get to keep his job after being hailed an ‘asset’ to the NHS, admitted to being ‘pished’ after he was taken to a police station.

It is said that he had knocked back up to six pints of beer before agreeing to get ‘f…ked up’ on drugs with a woman he met earlier in another bar. Officers found four snap bags in the medic’s pocket containing cocaine, ketamine and benzo tranquilizers which the Sweeney claimed had ‘blown his socks off’.

At the Medical Practitioners Tribunal Service, Sweeney who worked in the psychiatric department at Tameside Hospital in Ashton-under-Lyne, Greater Manchester faced being struck off for misconduct – but he was allowed to continue his career at the same hospital after his professional work was hailed as ‘exemplary’ by colleagues who said he was ‘well regarded’ by other healthcare professionals. 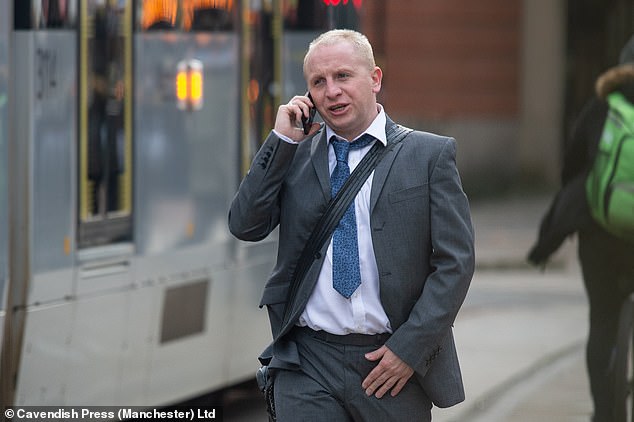 The incident occurred at 8pm on October 30 2017 after police were called to the Blue Pig bar and restaurant near Manchester’s fashionable Northern Quarter District where Sweeney, originally from Glasgow, had been out with friends.

Lawyer for the General Medical Council, Simon Vaughan told the Manchester hearing: ‘Officers had received a report of a male being aggressive to staff and customers and on their arrival there, they discovered Dr Sweeney had lost control and was acting in an abusive manner.

‘They said his eyes were glazed over, he was shouting and slurring his words, and he was swearing at staff members. 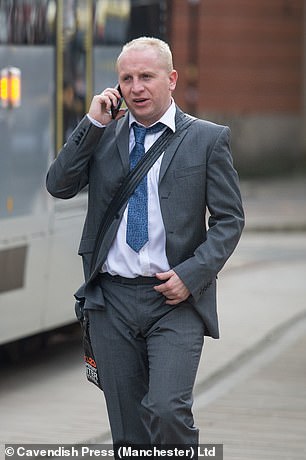 ‘He was approached by officers because of his behaviour but when they tried to interact with him he turned his abuse towards them. They described his behaviour towards them as aggressive and going on a foul-mouthed rant in front of other members of the public.’

Mr Vaughan added that there had been 20-30 members of the public around to witness the incident itself.

‘Officers were informed by bar staff that they believed he had drunk five to six pints of beer and they had been making reference to the fact he had taken drugs. On closer inspection of Dr Sweeney, they found white powder stuck to the septum area of his nose.

‘Officers physically intervened by taking hold of his arms in an effort to calm Dr Sweeney down but unfortunately that didn’t help as he attempted to pull himself from their grasp. They noted he had gritted teeth and he was breathing heavily.

‘They were concerned he was going to become more aggressive so officers continued with their intervention which result in him being handcuffed and placed in a police van but the verbal and physical abuse continued.’

Mr Vaughan said that officers had told how Sweeney had kicked the van door and had been unable to sit still whilst in the van. 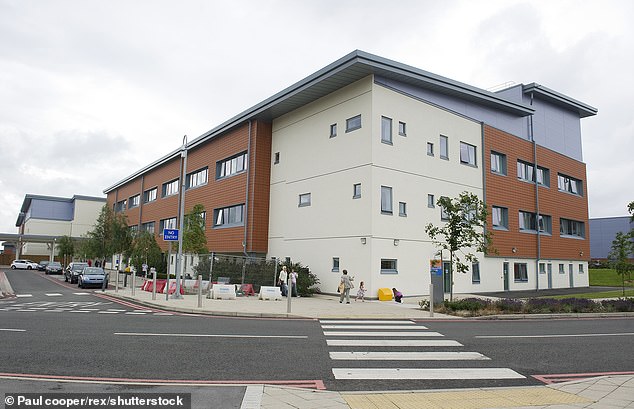 Sweeney works in the psychiatric department at Tameside Hospital (pictured above) in Ashton-under-Lyne, Greater Manchester

‘He was taken to Longsight police station where he was searched and four snap bags of white powder were found on his person.

‘Dr Sweeney was asked what they were and he confirmed there were two bags of cocaine, two bags of ketamine and a strip of five diazepam tablets. ‘

A police summary of the incident which was read to the hearing said: ‘The defendant stated he had been drinking in Manchester and Leeds and was ‘pished’.

‘He states he met a female in a bar and she asked him if he wanted to get ‘f..ked up’ to which he agreed. He stated she left the pub and returned a few moments later with the drugs. They both took some cocaine and it ‘blew his socks off’.

‘He states he was not working at the time and maybe got a little too intoxicated. He stated it was the first time he had taken drugs but didn’t remember anything from taking the cocaine until he woke up in a police cell the morning after.

‘The defendant admitted to possessing all of the controlled drugs. He stated the cocaine and ketamine were to get high and the ‘Benzos’ were to bring him back down on the following day.’

In February 2018, Sweeney admitted possessing controlled drugs of class and conditionally discharged by Manchester magistrates for 18 months. He was ordered to pay £105 in costs.

At his disciplinary hearing which was held largely in private, Sweeney admitted wrongdoing, telling the tribunal: ‘It was a stupid mistake. That day was the worst day of my life.’

In a character reference, a colleague known as Dr D said: ‘He is full of regret and apologies and is insightful of what he had done to himself, thus risking the prospect of continuing his current employment.’

A second senior doctor known as Dr A said Sweeney was now employed in a fixed term NHS contract adding: ‘There are no concerns with respect to Dr Sweeney’s clinical performance. He is flexible, competent, hard-working and reliable.

‘Any initial concerns I had upon learning of Dr Sweeney’s arrest were alleviated upon speaking with him face-to-face and observing his openness and remorse in discussing the matter. I consider him an asset to the hospital and the NHS and I hope Dr Sweeney will progress in his career and become a consultant.’

Ordering Sweeney to work under a range of conditions for two years, panel chairman Mr Richard Tutt said: ‘The Tribunal was impressed by the level of support that Dr Sweeney has received in his workplace and considers that this is likely to be indicative of the level of regard in which he is held by his colleagues who know him well.

‘It has been some 14 months since the incident and there has been no repeat of such behaviour since then. A period of conditional registration would be proportionate and appropriate for the protection of patients and would be in the public interest.

‘The Tribunal did not consider that a period of suspension was necessary and considered such a measure would be disproportionate and counterproductive. Dr Sweeney is described as an asset to the NHS.’