The marching season seems to be upon us. Last week there was (another) so-called strike by schoolchildren ‘against climate change’.

The former UKIP leader Nigel Farage is now leading a march from the North East to London, protesting against the ‘betrayal’ of Brexit by Theresa May. And on Saturday, the campaign known as ‘The People’s Vote’ is to descend on Whitehall and Parliament Square.

The latter is bound to be much more numerous than Farage’s demo. Whatever he says, if Mrs May wins the parliamentary vote on the Withdrawal Agreement this week, the UK will have Brexit.

And it’s when people are not getting what they want from Parliament that they protest in the largest numbers. Though they wildly exaggerate their support, even then. 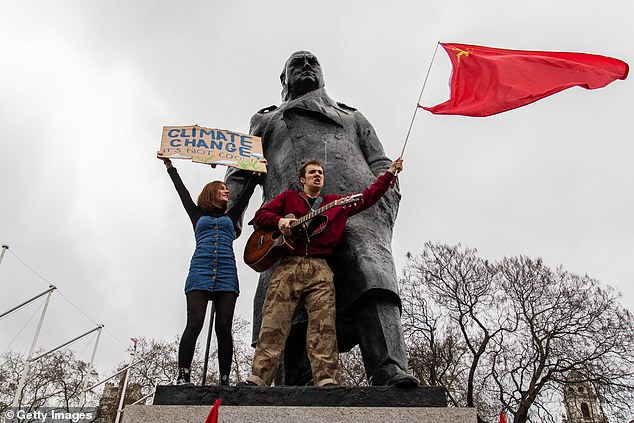 Poorly informed: Parliament Square protesters wave a hammer and sickle next to a statue of Winston Churchill on Friday, March 15

Those who want a second referendum (to cancel out the first) insisted that their march on Parliament last October was joined by ‘more than 700,000 people’.

It was only months later that a freedom of information request unearthed a debriefing document by the Greater London Authority which put the number of People’s Vote marchers at no more than 250,000.

And these days, when the social media can whip up a firestorm of outrage over nothing and everything, it is remarkably easy to get people to join a campaign. 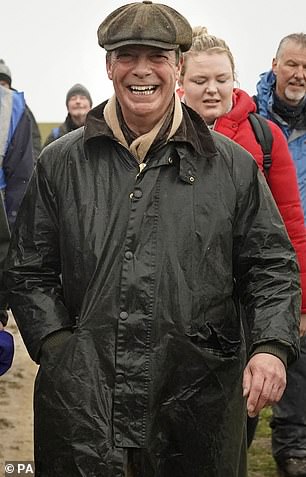 Pictured: Nigel Farage at the March to Leave, which set out from Sunderland on Saturday

This was demonstrated by one Anders Colding-Jorgensen of the University of Copenhagen. In 2009 he created a Facebook group to protest against the demolition of the Stork Fountain (which adorns a square in the Danish capital).

No fewer than 10,000 people joined in the first week; after a fortnight, the group had over 27,000 pledging fealty. Then Colding-Jorgensen revealed that he had been conducting a social experiment to show how easy it was to mobilise people via false claims on the social media: there never was a plan to knock down the Stork Fountain.

This makes me wonder what has been told to the schoolchildren who have deserted their classrooms — with the encouragement of their teachers — to protest about alleged government inaction ‘against climate change’.

They have been led to believe that British politicians have been doing ‘nothing’ to reduce emissions of CO2.

Whoever taught them that is either ignorant, or deliberately covering up the fact that UK CO2 emissions have fallen consistently in each of the past six years (the result of government-mandated action to shut coal-powered power stations).

Last year, or so scientists tell us, UK CO2 emissions were at the lowest levels in more than 120 years, despite the fact that our population and output is vastly higher.

Add to this that the UK contributes little more than one per cent of global CO2 emissions, and you wonder — again — what these children have been told by their teachers.

Have they been told, for example, that China is building almost 260 gigawatts of new coal-fired power generating capacity (equivalent to roughly the entire U.S. coal power station fleet)?

Have they been told that last year China also financed more than a quarter of worldwide coal plant construction (to the tune of $36bn)? 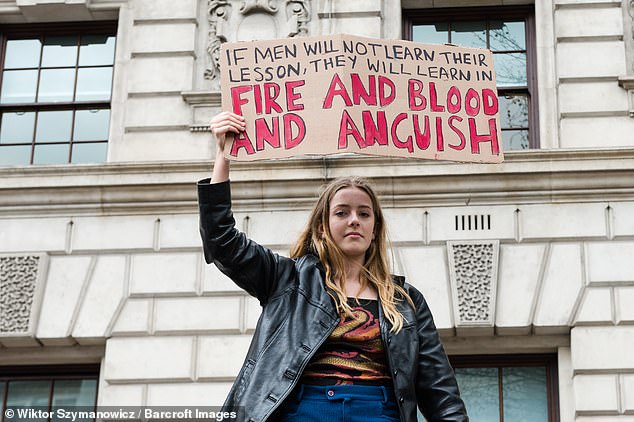 If these ‘striking’ school- children were at all informed on the matter that exercises them so much, they would be demonstrating not in Parliament Square but outside the London embassy of the People’s Republic of China.

That’s the one with the red flag, as its government still claims to be faithful to Marxism. In fact, Communism is also fashionable among young would-be saviours of the planet.

A number of those demonstrating last week were waving the red flag complete with hammer and sickle. One of them was standing on the plinth with the statue of Winston Churchill in Parliament Square. He had doubtless never been told by his teachers that the late Soviet regime and its Eastern European satellites made Donald Trump look like an ecologist.

The Chernobyl nuclear blow-out was only the most spectacular example of its environmental blight — and the only one which the Soviet government was unable to cover up or prevent being known about in the West.

But since the collapse of Soviet Communism we have learned much more. In 2013 a Russian scientist from Murmansk disclosed that, despite official denials, the Soviet navy had been dumping nuclear waste in the Barents Sea, several hundred miles from the Norwegian coast in a known fishing area.

Apparently the Soviet fleet punctured the protective containers, so the barrels of radioactive waste would fill with seawater and sink, rather than risk them floating and being discovered.

The real environmental gap between the West (so despised by those who fill pupils’ minds with the joys of Marxism) and the Soviet system was most clearly revealed in Germany after the fall of the Berlin Wall.

At the time of reunification, only half of the East’s domestic sewage was receiving treatment: half of the country’s lakes were considered dead or dying. And in some parts of Communist East Germany the level of air pollution was between eight and 12 times greater than found in ‘capitalist’ West Germany.

I fear the ‘striking’ schoolchildren — many of whom were chanting ‘f*** Theresa May’ outside Downing Street — have been taught to think that Jeremy Corbyn was right that East Germany was a workers’ paradise (the Labour leader holidayed there, he admired it so much).

Perhaps it’s time for a march against Communism. Ending up outside the offices of the National Union of Teachers.

Yesterday’s Mail on Sunday reported the case of an autistic man, Martin, seized from a farm where he was enjoying work experience and put into a care home two counties away.

His mother, Sinead, told Ian Birrell (who has revealed how hundreds have been torn away from their parents in similar fashion): ‘Our son had been kidnapped by the state and we were powerless to do anything’.

Help may be at hand. Three mothers of young adults with intellectual disabilities have launched a test case legal challenge with the solicitors Irwin Mitchell — which will be heard next Monday by the Vice President of the Court of Protection.

One of the mothers is my wife (our daughter Domenica is a 23-year-old with Down’s Syndrome).

Their purpose is to amend the Code of Practice which governs the courts’ interpretation of the Mental Capacity Act.

It is only in ‘the most difficult cases’ that parents or relatives are granted the status of ‘welfare deputy’ — a status that gives them decision-making authority over the treatment of their children.

The mothers’ argument is that the courts should place much greater emphasis on what the young adults’ views and wishes are.

But even if I were not the husband of one of the parties to this crowdfunded case (www.crowdjustice.com/case/3forallstagetwo) I would be convinced by the moral force of their claim: ‘We love our children and need to continue to take care of them and make decisions about their welfare. We find it unbelievable that now they have become adults we have lost that right.’

'At least 20 dead' after 'gunman armed with an assault rifle' opens fire at a Walmart in El Paso
Father, 41, who was shot dead in his £80,000 Porsche while picking up his son from school is named
Jane Fonda is arrested at climate change rally in Washington D.C. after moving to the capital
Winnie Harlow announced as Victoria's Secret model
Meet Venus Cuffs, the once homeless 'pro-domme' who runs underground fetish BDSM parties
I'm A Celebrity: Nadine Coyle, 34, and Caitlyn Jenner, 70, hit the jungle showers
2 utility workers killed in helicopter crash in rural NY
Private parking firms are raking in huge profits