Anyone who thinks that Theresa May, faced with a gang of Cabinet ministers calling for her immediate exit from Downing Street, would give up the key to No. 10 without a struggle, has no understanding of the woman.

She is more likely to say, in the spirit of Charlton Heston: ‘You’ll have to pry it from my cold, dead hands.’

It was her cousin, Andy Parrott, who revealed that even as a schoolgirl in the sixth form, the then Theresa Brazier declared her ambition to become the first woman leader of the Conservative Party.

She was allegedly disappointed, as an Oxford undergraduate, when Margaret Thatcher’s accession in 1975 made that impossible, but it did not dim her ambition to lead the Tory Party in her turn. 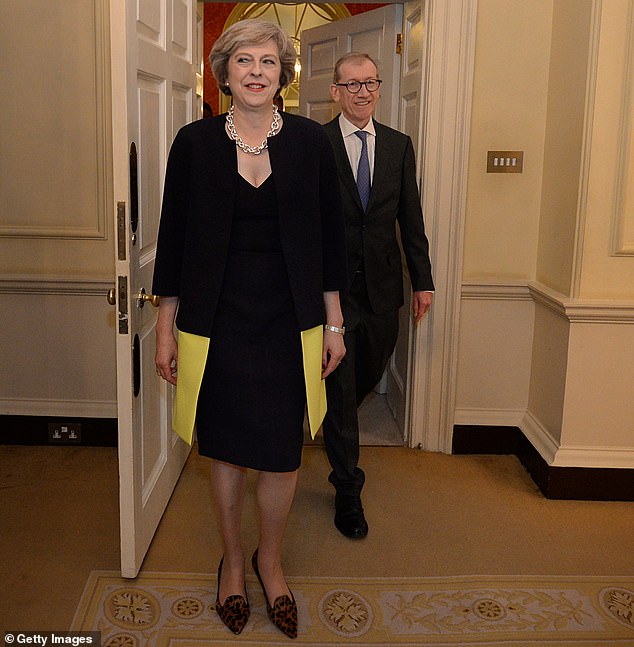 Prime Minister Theresa May, followed by husband Philip, arrives at 10 Downing Street after meeting Queen Elizabeth II and accepting her invitation to become Prime Minister and form a new government on July 13, 2016

Ambition is not to be condemned: it is everyone’s right to dream — and to try to make their dreams come true. But I have always been puzzled by Mrs May’s extraordinary aspiration.

He, or she, should relish the challenge of debate. They should delight in the market place of political ideas, preferably with strong views of their own. 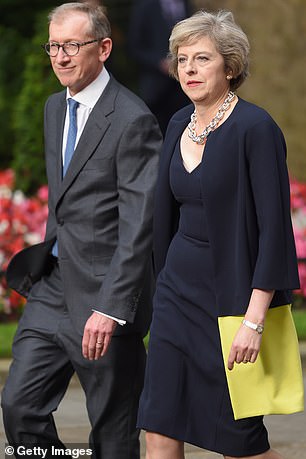 Mrs May, the former home secretary, became the UK’s second female Prime Minister after she was selected unopposed by Conservative MPs

For her biography of the Prime Minister, Rosa Prince spoke to Rosalind Hicks-Greene, who stood for the Liberals in a school mock-election in February 1974. She beat Theresa Brazier, who was (of course) pretending to be the Conservative leader. Hicks-Greene told Prince: ‘It was not hard to beat Theresa as she was not very charismatic.’

But it was equally characteristic of her, after this early rebuff, to be utterly undeterred in her ambition.

And she was right. In July 2016, she did become Prime Minister, in circumstances few could have foreseen.

Barely a year after winning a general election, David Cameron quit following a victory for Leave in the EU referendum he called. With the absurd exception of Stephen Crabb, May was the only Remainer to enter the leadership contest that followed. The stars of the successful Leave campaign, Boris Johnson and Michael Gove, fell out spectacularly; the last remaining Brexiteer standing, Andrea Leadsom, pulled out after an unfortunate newspaper interview.

With Mrs May the only candidate left, the party membership didn’t even get a chance to cast their votes.

My sole lengthy one-on-one meeting with Mrs May at No. 10 took place eight months later when she was in her unusually lengthy Prime Ministerial honeymoon. I still cringe a little when I recall how hard I found it to create a fluid conversation. There were the awkward silences which others report from similar encounters.

Afterwards, as I left the room with the No. 10 press chief who had set up the meeting, I remarked: ‘I’m sorry that didn’t go too well.’ She immediately replied: ‘But that was one of the very best!’

It was two months later that the PM (in contradiction to all her previous assurances) called a snap general election three years before she was required to go to the country.

Her former director of strategy, Chris Wilkins, gave a fascinating account of the debate over that decision in her inner circle, when he and three other advisers were pressing her to call the election. 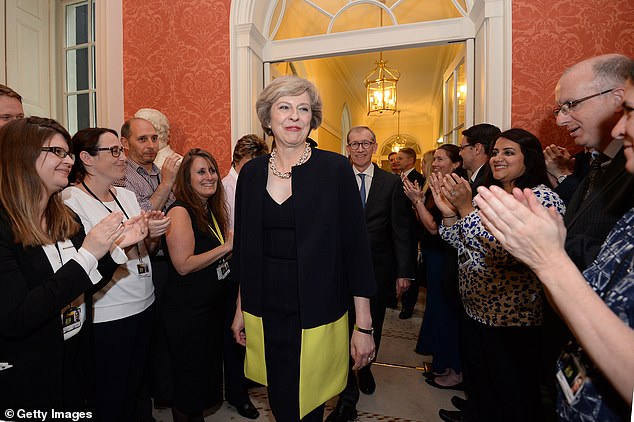 Prime Ministers should have immense powers of persuasion, or at least be highly articulate. They should be able to inspire people to follow them and to work with them. They should have the ability to charm — both privately and publicly. Yet Theresa May (pictured as she walks into Downing Street on July 13, 2016), for all her other personal qualities, has none of these attributes. And never did

In particular, he revealed the contribution of Philip May: not just the PM’s husband but her closest political confidante.

‘Philip definitely had the largest reservations of anyone in the room,’ said Wilkins. ‘The point he made was that while he could understand all the arguments we were making, we had to understand what a big risk it was for them as a couple, and he said we had to appreciate that it had taken them years to get to the position of being in No 10, and we were asking them to put that all at risk.’

Mrs May undoubtedly has a consuming sense of duty and passion for public service. But this eyewitness account lays bare the real emotions of an intensely ambitious woman (and of a husband who aspired to become an MP himself and sublimated his own political ambitions in his wife’s slow ascent to power).

More from Dominic Lawson for the Daily Mail…

It just says: we have spared nothing to rise to the top of the greasy pole (as Disraeli described becoming Prime Minister), so don’t for a second forget how unpleasant it is for us to risk sliding all the way down.

That risk was taken, and Theresa May’s lack of any campaigning or persuasive skills — at least as a leader — was horribly exposed. Yet I don’t share the common view that she made a terrible mistake in calling an election, even though its outcome — the loss of the Tory Party’s parliamentary majority — destroyed the Prime Minister’s authority and also her party’s confidence in her judgment.

She had been urged by the Chief Whip to recognise that her working majority of 13 was inadequate for the challenges of getting Brexit through the House of Commons. He was correct. While doing it in a hung parliament is now being shown as impossible, it would have been horrendously difficult even with the slim majority May inherited from Cameron.

She was right to go for the big majority that her huge lead in the opinion polls led everyone — and I mean everyone — to believe she would win a landslide against a Labour Party led by Jeremy Corbyn.

And, thanks to the sudden irrelevance of UKIP, the Conservative vote share of 42.3 per cent — which May won — was as high as most Tories could have expected or hoped for at the outset. The shock was that Labour’s share of the vote soared to 40 per cent (compared with the 30 per cent it won under Ed Miliband in the 2015 general election). To use a soccer analogy, she went into the campaign with a 5-0 lead and at the end it was 5-4 (at best).

No wonder the traditional photo of the winning Prime Minister entering No. 10 (taken from inside Downing Street) showed a grim-faced Mrs May coming back through the most famous door in Britain. Her husband wore a similar expression. They both knew that purgatory was in store.

Yet the Cabinet, in fraught discussions immediately after the vote, had chosen to back her remaining in No. 10. That was probably a mistake.

But it would be equally a mistake for her to be dumped this week in a putsch, propelling some bloke to take the seals of office from the Queen. It would not be a good look for a male-dominated Tory cabinet, for a second time, to eject a tearful female leader from Downing Street. Or for a furious Conservative Party membership once again to be denied a chance to vote on their leader.

Much better, perhaps, for Mrs May to tell her colleagues that she will agree to stand down once, or if, the Brexit withdrawal agreement is passed by Parliament. That will then allow time for a proper leadership election.

Even that will be immensely painful for her. Mrs Thatcher, at least, had won three tremendous election victories and enjoyed over a decade of transformational leadership at No. 10 before she was discarded.

And what is there for Mrs May to do afterwards? Traditionally, exiting politicians declare themselves happy to ‘spend more time with my family’. But as one of her cabinet colleagues put it to me: ‘For Theresa, an only child who was, sadly, unable to have children of her own, and whose parents died when she was in her 20s, the Conservative Party is the nearest thing she has had to a family.’

This helps explain her extraordinary devotion to the Tory Party. It also explains why removal as its leader would be so unbearable for her.

Sons of murdered journalist Jamal Khashoggi reveal they have forgiven his killers
The Queen, 92, is to 'give up driving on public roads' following Prince Philip's horror car crash
Minute by blood-soaked minute, the TRUE story of Zulu
Boris Johnson tells the Mail it would be HIM - not Carrie - calling the shots at No10
Two politicians fought for their honour in 1967 after one shouted ‘Shut up, stupid!’ at the other
Supercar horror smash leaves man, 25, fighting for life
French riot police 'spray TEAR GAS' in faces of seated Extinction Rebellion activists
Quarter of Scotland's coronavirus deaths have been in care home