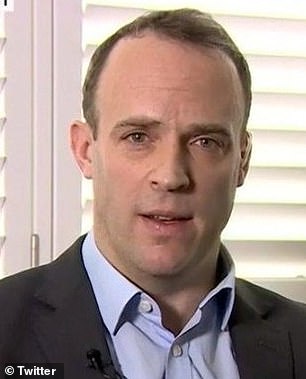 Theresa May has been warned that striking a deal with Jeremy Corbyn risks ‘handing the keys to Downing Street’ to an avowed Marxist – and destroying Brexit in the process.

Former Brexit Secretary Dominic Raab – one of the frontrunners to succeed Mrs May – describes her ‘desperate’ negotiations with Mr Corbyn as ‘a major mistake… bad for Brexit, bad for the Tory Party and potentially disastrous for the nation’.

His powerful intervention in an article for today’s Mail on Sunday – on the right of these pages – comes amid a growing revolt in the Tory party over the cross-party talks, with local associations threatening to go on strike in next month’s local elections.

Tory MPs fear Mrs May has ‘legitimised’ Mr Corbyn with the talks – and that, if he were to win power, he would be impossible to shift.

They fear he would legislate to reduce the minimum voting age to 16, warping the electoral system in his favour.

And a new poll reveals how seriously out of touch with younger people the Tories are seen to be, with the party now struggling more over age than class.

The Onward think tank, set up by former May aide Will Tanner, will tomorrow publish a report warning that the Conservatives are losing support among younger voters, with the tipping point at which people typically switch to voting Tory rising to 51 from 47 in 2017, due to falling home ownership and austerity.

Mr Raab warns: ‘If the PM bends to Mr Corbyn’s whims now, we can kiss goodbye to the opportunities Brexit offers us.’ 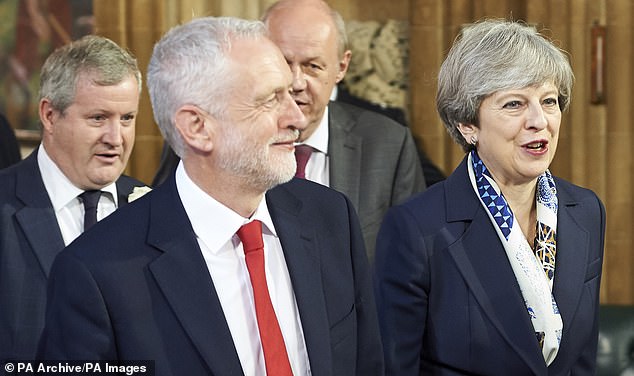 Tory MPs fear that Mrs May has ‘legitimised’ Mr Corbyn with the talks – and that, if he were to win power, he would be impossible to shift

The former Minister, who resigned from the Cabinet last year over Mrs May’s deal, says: ‘Labour’s antics are designed not to deliver a Brexit faithful to the referendum but to create chaos – which Mr Corbyn wants to exploit to seize power.

He has a history of sympathising with the IRA, Hamas and Hezbollah, so it is no surprise Mrs May’s overtures have gone down badly with Conservatives. Our supporters are frustrated or simply giving up, with many threatening to take their vote elsewhere, to Ukip or even Nigel Farage’s Brexit Party.

‘There is now a danger that Brexit could be lost and that the Government could fall – handing the keys to Downing Street to the very man the PM is depending on.’ Mr Raab adds devastatingly: ‘As Brexit Secretary… I urged her to take a firmer line with Brussels.

‘My efforts were undermined by others within Government.’

And his concerns have been echoed by grassroots Tories, with dozens of once-loyal activists sharing pictures of their cut-up membership cards on social media.

Bob Perry, deputy chair of Hornchurch and Upminster Conservative Association in East London, warned that ‘apoplectic’ party members are ready to strike to get Mrs May to step down, adding: ‘The party will be annihilated in local elections because loyal activists, understandably, want nothing more to do with the party. They will only return when she goes. By collaborating with Corbyn over Brexit, she has alienated the grassroots more than any party leader in history.’

And Dinah Glover, chairman of London East Conservatives, said: ‘This last week has been a turning point for many members who were willing to give the Prime Minister the benefit of the doubt.’

She added: ‘The membership is completely demoralised that democracy is being overturned and we are failing to deliver what we promised to the British public.’

Ed Costelloe, chairman of the Grassroots Conservatives group, accused the PM of being ‘on a different planet’, adding: ‘Theresa May has little or no reputation left and her time is nearly up.’

Dominic Raab: If Mrs May bends to Corbyn’s whims, all Brexit’s benefits will be lost

Three years after the nation voted decisively to leave the European Union, Brexit still hangs in the balance. In a final, desperate bid to get her EU deal through Parliament, our Prime Minister has teamed up with the Marxist Labour Party leader, Jeremy Corbyn.

This is a major mistake – bad for Brexit, bad for the Tory Party and potentially disastrous for the nation. Mrs May must change course, and quickly.

Mr Corbyn, remember, has no serious interest in securing an effective Brexit. Throughout the whole process, he has zig-zagged like a drunk stumbling home from a Communist Party knees-up. Rather he will demand what amounts to a Single Market – something my party has explicitly rejected.

If the PM bends to Mr Corbyn’s whims now, we can kiss goodbye to the opportunities Brexit offers us.

And we would give up the right to strike global free-trade deals with fast-growing and emerging economies, which would help create more jobs here as well as cutting the cost of living.

Mr Corbyn has even held talks with EU chief negotiator Michel Barnier, and the two are actively coordinating their positions to dilute or derail Brexit.

When the PM returns to Brussels this week to seek another delay to Brexit, the EU will probably try to impose punitive conditions already discussed with Mr Corbyn’s team.

At the same time, the Labour leader will want to set conditions on the PM before allowing Labour MPs to support her approach in the Commons.

Labour’s antics are designed not to deliver a Brexit faithful to the referendum, but to create chaos – which Mr Corbyn wants to exploit to seize power.

He has a history of sympathising with the IRA, Hamas and Hezbollah, so it is no surprise Mrs May’s overtures have gone down badly with Conservatives. Our supporters are frustrated or simply giving up, with many threatening to take their vote elsewhere, to Ukip or even Nigel Farage’s Brexit Party.

Indeed, her approach threatens to damage the Conservatives for years. But just as serious is the danger from Mr Corbyn and the hard Left Labour rabble he wants to put into power. The Government has spent years explaining why Mr Corbyn would sink our economy with his Loony Left ideas. Why rehabilitate him now?

Why sub-contract the biggest decision we have faced in a generation to a man whose unsavoury friends and anti-Western obsessions threaten national security?

Richard Dearlove, the former head of MI6, warned in this newspaper earlier this year that Mr Corbyn’s adviser, Seumas Milne, would have ‘no chance’ of passing Whitehall security checks.

Mr Corbyn has no intention of putting the country first. But by inviting him into the Brexit process, the Government is giving him a veneer of credibility.

There is now a danger that Brexit could be lost and that the Government could fall – handing the keys to Downing Street to Corbyn.

As Brexit Secretary, between July and November last year, I warned the Prime Minister we could end up in this position. I urged her to take a firmer line with Brussels, insisting on an ability to exit the now-notorious ‘backstop’ – a regime of laws to be imposed on the UK without us having any say. My efforts were undermined by others within Government.

The Government also failed to heed the concerns of the DUP and other MPs about the arrangements for Northern Ireland.

Brussels connived with the Irish government on a protocol that threatens the constitutional and economic integrity of the UK. The Government should have seen off this predatory pincer movement.

Two more Ministers have resigned in frustration at these failings. On Wednesday, the Brexit Minister responsible for No Deal planning, Chris Heaton-Harris, stepped down after the PM announced she would delay Brexit again, as did Nigel Adams, a Wales office minister and whip – the latest in a long list of Ministers who have left in despair at the Government’s failure to keep its promises.

If the EU continues to seek to humiliate our country, the Government must not cower. Instead, buoyed by the self-belief and courage of the British people, we should step out of the failing Eurocracy and walk tall in the world.

A Left-wing rising star is being lined up to replace Jeremy Corbyn amid fears the Labour leader’s health will force him to stand down before he can get to No 10.

Docker’s daughter Rebecca Long Bailey has been privately ‘anointed’ by leading Corbynistas as their best hope of carrying on the ‘Corbyn project’, sources said last night.

The claim emerged after the fiery Labour business spokesman, a protegée of key Corbyn ally John McDonnell, was picked to form part of Labour’s Brexit team last week to thrash out a deal with the Government. 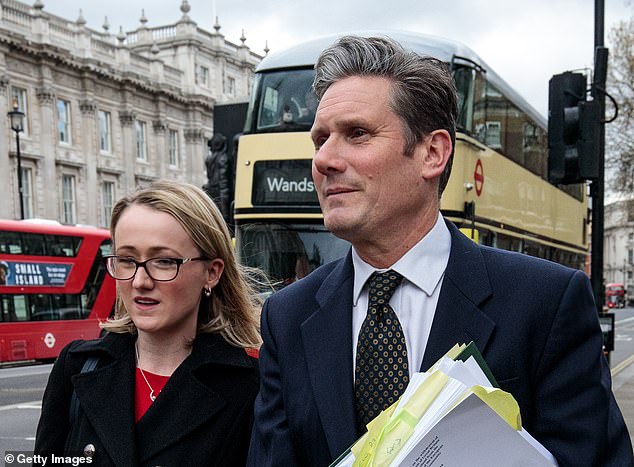 But it also comes amid increasing predictions from Labour colleagues that Mr Corbyn, 70 next month, is already feeling the strain and will have to step aside. Just two weeks ago, his office was forced to confirm that he was undergoing treatment at Moorfields Eye Hospital in London for a muscle weakness in his right eye which required him to wear corrective glasses.

The revelation was quickly followed by Labour insisting that Mr Corbyn goes for regular runs, cycles and goes to the gym. But the keep-fit counter-claims have failed to convince many fellow MPs.

One said: ‘The strains of being Opposition leader would tax a man 20 years younger and it’s clearly taking its toll on Jeremy.

‘Not only does he look much older, but he needs time off after stressful days to recover. Many of us expect him to stand down before too long.’

One of 36 MPs who originally nominated Mr Corbyn for the leadership in 2015, the former solicitor is seen as fiercely loyal to his Left-wing vision.

One said: ‘She’s also fearless in front of the cameras and nearly always sticks to the Corbynista line.’

But critics argue she is too young and inexperienced to take on the top job in the near future. One said: ‘Rebecca may be very good but she’s just not ready yet.’

Ms Long Bailey is also expected to be up against tough competition from party schools spokeswoman Angela Rayner, who has angered Mr Corbyn’s office by reportedly despairing that he will ever lead the party to power.

But last night, Labour dismissed talk of Mr Corbyn having to step down. A party spokesperson said: ‘False speculation about people’s health is contemptible.

‘Jeremy is in good health, on the campaign trail every week, travelling the country, and runs and cycles regularly.’

Brother of murdered New Jersey millionaire Keith Caneiro is charged with arson
New Year's celebrations begin with Hogmanay torchlit procession in Edinburgh
The weekend the wheels fell off the Royal PR machine
Family's outrage after home deal with developer falls through
Bob Higgins: Football coach GUILTY of 45 charges of indecent assault
Student pilot is forced to make an emergency landing after his trainer PASSED OUT in the cockpit
Powerful 6.6-magnitude earthquake strikes off Puerto Rico
After miscarriage of IVF twins, a size 22 woman lost four stone in six months