Terrified shoppers have been filmed running for their lives as a ‘knife-wielding’ man was arrested at a Westfield shopping centre during busy Boxing Day sales.

Dozens of police officers swooped in on the centre in Stratford, east London, at 4.30pm this afternoon as thousands of consumers descended on the mall to snap up discounted goods.

A loud bang on the first floor sent panicked customers running for the exits and screaming in fear. 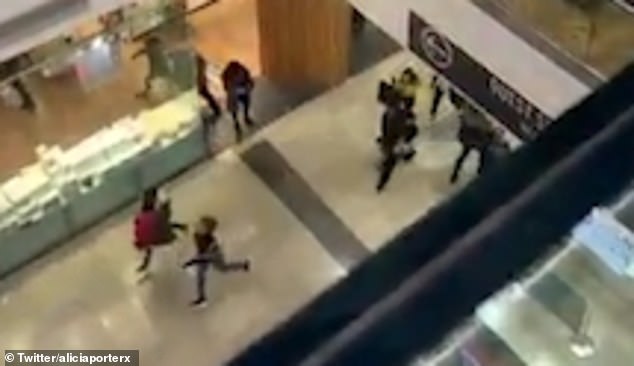 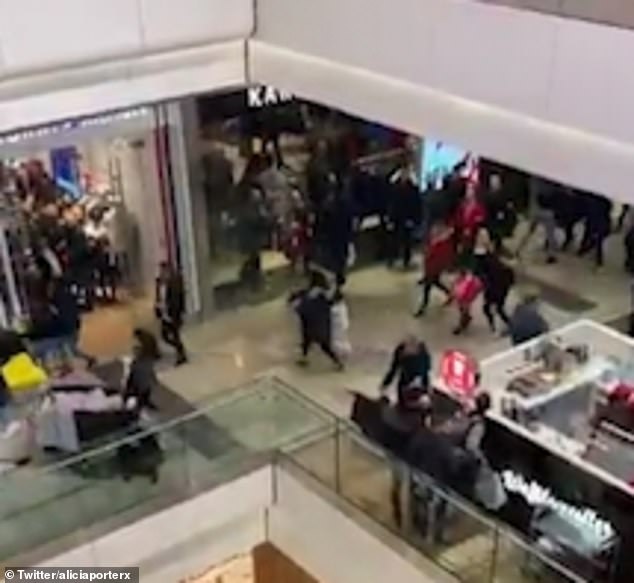 Men, women and children sprinted toward the exits amid the frantic Boxing Day sales

Parents were seen pushing buggies as they frantically ran through the shopping centre.

At the same time, on the ground floor, officers arrested a man on suspicion of carrying a blade after performing a stop and search on him.

A Metropolitan Police spokesman said: At 4.20pm, officers patrolling Westfield Shopping Centre E20 stopped a male after he was suspected to be in possession of a concealed weapon on the ground floor.

‘He was stopped by police and searched and a knife was found. He was subsequently arrested on suspicion of possession of an offensive weapon.

‘There are no reports of any injuries. The male arrested has been taken to an east London police station for questioning.

‘Separate to this, at roughly the same time, it is believed to a counter top in the food court area on the first floor was broken.

‘This loud noise led to some people in crowds nearby leaving the area. More police units attended to support Westfield security following this and no further offences were found. Again there were no reported injuries.’

Witness Alicia Porter said on Twitter ‘there were was a very loud noise, lots of screaming and a crowd of people running a sprinting for exits’.