This is the dramatic moment a car with blue flashing lights is hit by another vehicle as it appears to run a red traffic light.

Dashcam footage captures the vehicle – which also has a blaring siren – as it approaches a junction in Sutton, London.

Two cars waiting to turn right move out of the way as the white car passes the traffic light and manoeuvres around stopped cars. 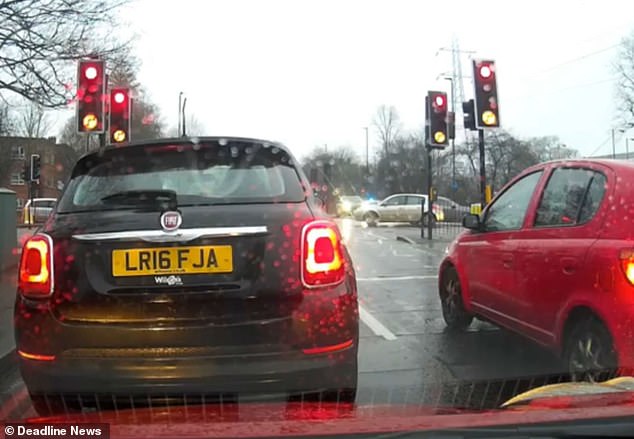 Dashcam footage captures the white vehicle as it approaches a junction in Sutton, London

But as the vehicle moves through the junction, a black car emerges from its left and crashes into its side.

The white car is sent spinning to its right – and the bumper disintegrates as the black vehicle smashes into one of the traffic lights.

The driver of the black car gets out as other road users make their way over to check on those involved in the crash at around 8am on Friday, January 25. 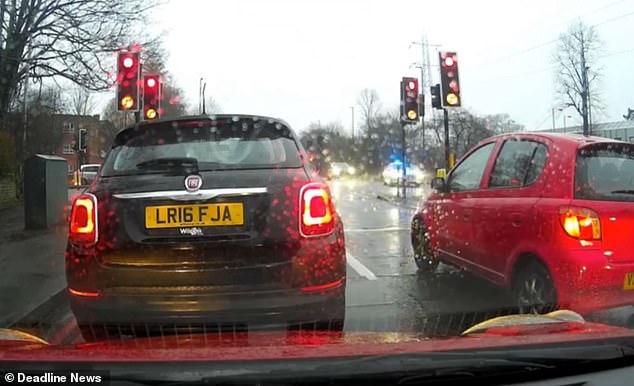 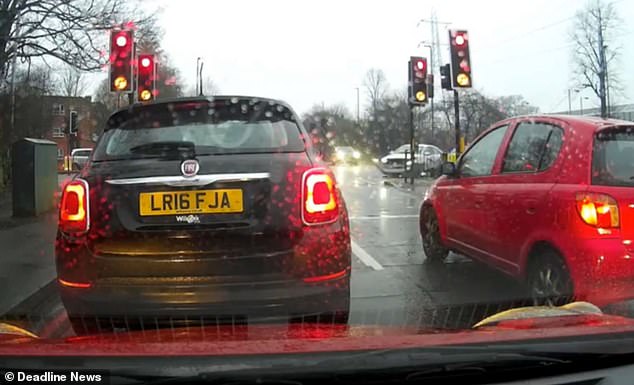 Jay Ka, who filmed the collision when he was stopped at the opposite traffic light, initially believed the crash involved an unmarked police car.

But a spokesman from the Metropolitan Police confirmed this was not the case.

As Mr Ka drives away, the damage to the white car is clearly visible with the bumper ripped off and one wheel knocked in.

The black car’s bonnet is crushed and is resting against traffic light pole.

Rob Price wrote under the Mr Ka’s post: ‘People are driving around oblivious to what is happening on the roads and always should be prepared for something to happen at a road junction even if your on green.

‘Anticipation at all times.’ 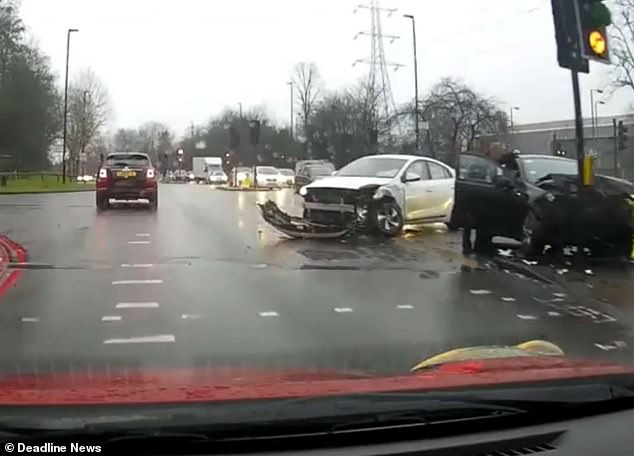 A spokesman for Metropolitan Police said: ‘Police were called at approximately 08:10hrs on Friday, 25 January to reports of two cars in collision on Sutton Common Road at the junction with Reigate Avenue, Sutton.

‘No reports of any serious injuries.

‘Enquiries into the circumstances continue. There were no police vehicles involved in this collision.’

A London Ambulance Service spokesperson said: ‘We were called at 8.13am on 25 January to Sutton Common Road, Sutton, to reports of a road traffic collision.

‘We sent a medic in a response car and an ambulance crew.

‘We assessed a person at the scene but did not take them to hospital.’