This is the dramatic moment a fearless shopkeeper fought off a knife-wielding robber while on FaceTime to his girlfriend.

Ozcan Yildirim, 36, was working alone at Wallisdown News in Bournemouth, Dorset when a masked man stormed into the store with a large kitchen knife.

The violent thief demanded the money from the till while pointing the eight inch blade over the counter. 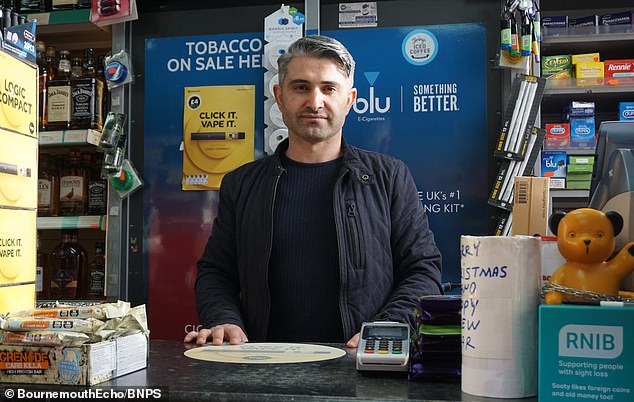 Ozcan Yildirim, 36, fought off a knife-wielding masked robber at Wallisdown News in Bournemouth, Dorset, while on FaceTime to his girlfriend

Instead of doing as the man ordered, Mr Yildirim initially attempted to fend him off using a box of National Lottery till roll.

They then engaged in a tussle over the desk, during which the knife slashed the palm of the worker’s hand.

The raider grabbed hold of Mr Yildirim’s shirt as the dispute continued before the shop worker fought back with a series of blows to the robber.

The 36-year-old then amazingly managed to disarm the thug and remove his mask and jumper as he left the scene.

When the raid began, Mr Yildirim had been making a video call to his partner and she remained on the screen throughout.

At first she thought he was playing an elaborate prank on her but soon realised something far more serious was going on.

Mr Yildirim, who was treated in hospital for the wound to his hand, said: ‘He came into the store and demanded the till money.

‘I didn’t get an opportunity to say anything to him, he didn’t give me a chance. He tried to stab my hand. I started to punch him and he got scared. 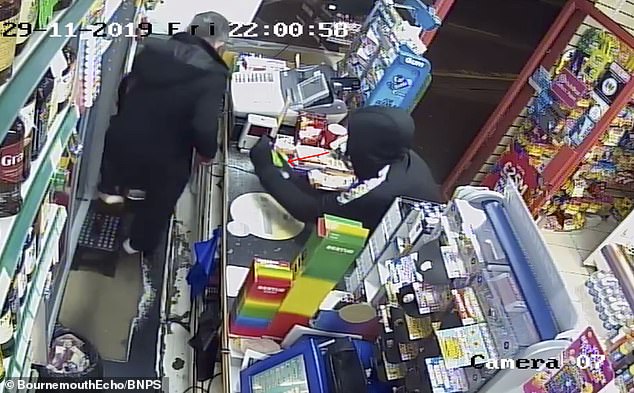 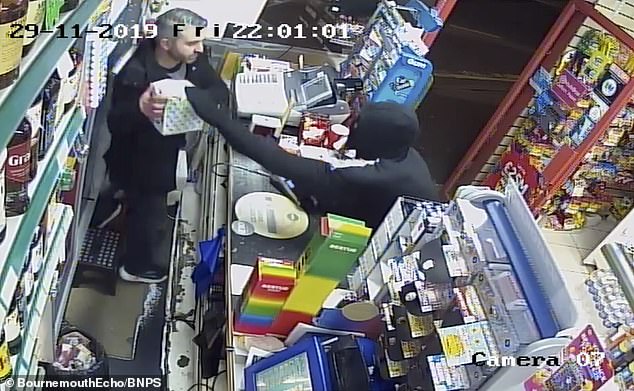 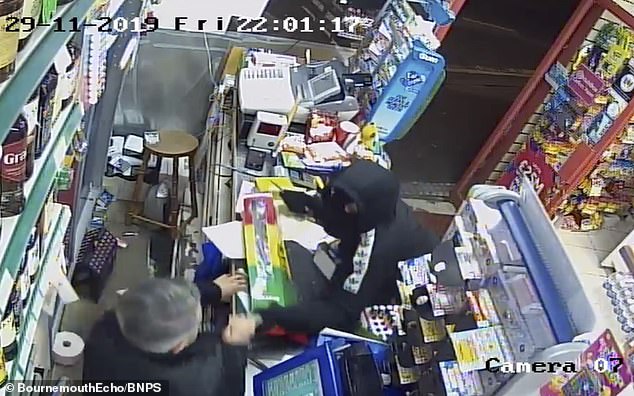 The shopper managed to amazingly disarm the thug in a tussle over the counter, during which his palm was slashed 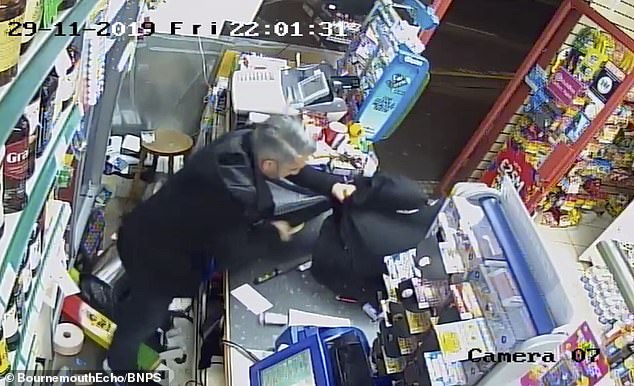 Mr Yildirim then removed the mask and jumper of the robber, who at this point had dropped the large kitchen knife onto the counter 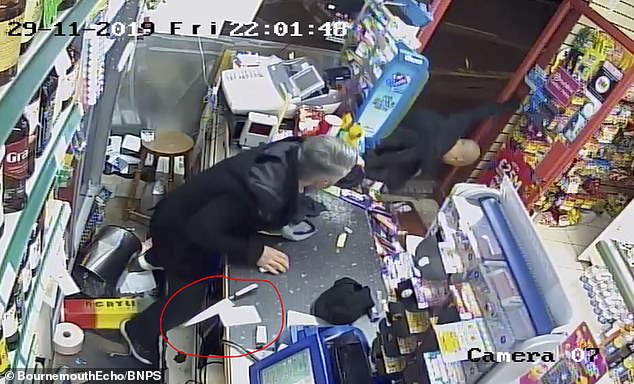 The now unmasked robber fled the scene after his knife was taken away. Mr Yildirim’s next door neighbour came to check on him before they phoned the police

‘He tried to run but I took the knife from him and his mask and jumper came off.

‘To be honest I thought it was some sort of joke at first until he stabbed in the hand. He just came in for the money and nothing else.’

He added: ‘We have never had anything like this before, I have never seen someone with a knife.

‘After the man ran away the next door neighbour came round to check I was okay and we called police.’

The store is owned by Mr Yildirim’s brother and has been in the family for the past 14 years. 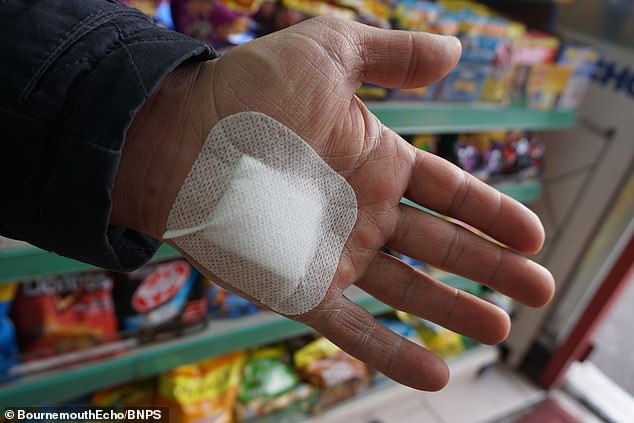 Mr Yildirim was treated in hospital for a wound to the hand, after the robber slashed his palm before running away. A next door neighbour then came to check on the shopkeeper

Police are now investigating the incident, which took place last Friday, but no arrests have yet been made.

A spokesman for Dorset Police said: ‘We were called on Friday evening to a report of an attempted robbery at Wallisdown News Road in Bournemouth.

‘A man threatened a staff member with a knife and demanded for money to be emptied from the till.

‘An altercation occurred during which the victim sustained an injury to his hand. He was taken to hospital for treatment.

‘Officers attended and carried out a search of the area for the offender.

‘An investigation is underway into the incident but no arrests have been made.’

Anyone with any information on the attack should contact Dorset Police.

Apartment the size of two car parking spaces features a bed that can be pushed in to the wall
Kylie Jenner, 21, is planning another baby and 'definitely' wants a second girl
Wayne Rooney's marriage woes as Colleen fears that son Kai will read about his father's threesome
Chaser the 'world's smartest dog' dies at age 15
MARTIN SAMUEL: Mourinho and Manchester United need to learn to smile again
Marriage makes you healthier - unless you're a straight woman
Jeremy Corbyn' will today back move for Labour to change Brexit policy'
Creepy moment a massive black spider emerges and bares its bright green venomous fangs