A drink-driver who claimed a man she met in Wetherspoons was driving but ran away when her car smashed into traffic lights was foiled by her own dash cam.

Caroline Jeffery, 45, was caught driving while almost twice over the legal limit after she crashed her Volkswagen Golf in Crowborough, East Sussex.

The warehouse worker originally denied drink-driving and claimed a man she met that night in Wetherspoons had offered to drive her home.

She told police who were called to the incident at 10.48pm on Tuesday, January 15 that he ran away after the car slewed off the road and into the lights.

But Jeffery’s own dash cam footage showed her getting out of the driver’s door after the crash. 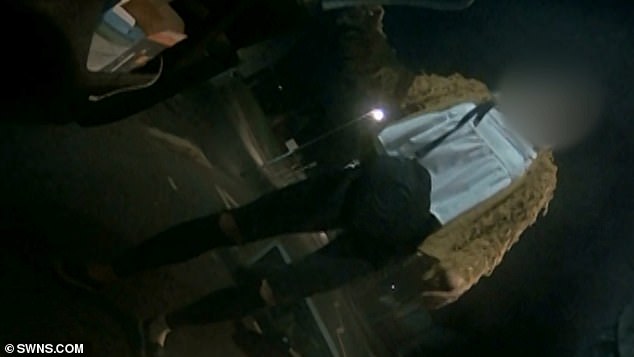 Caroline Jeffery, 45, was caught drink-driving when she smashed her Volkswagen Golf into a set of traffic lights in Crowborough, East Sussex, and her dash cam recorded her getting out the driver’s door

When Sussex Police breathalysed Jeffery they found she had 66 microgrammes of alcohol per 100 millilitres of breath – 31mcg over the legal limit.

At Worthing Magistrates’ Court she was banned from driving for 18 months, fined £530, ordered to pay £200 costs and a £53 victim surcharge.

A spokesman for Sussex Police said: ‘Caroline Jeffery claimed an unknown man who she met at the local Wetherspoons offered to drive her home from the pub and then ran from the scene following the collision. 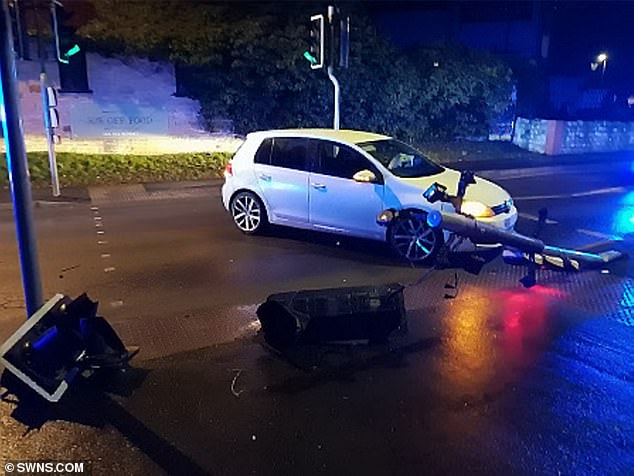 Photographs taken at the scene show the extent of the damage caused to the traffic lights and the vehicle involved, which includes a smashed windscreen 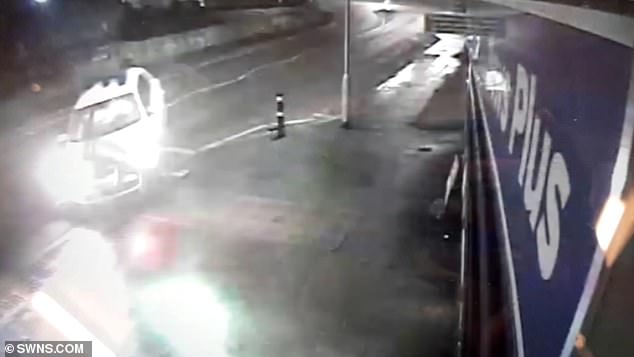 ‘However, footage from her dash cam clearly shows her exiting the driver’s side of her vehicle. Further evidence of this is shown by CCTV from a local shop, which also captured the crash.

‘The dash cam and CCTV were produced as evidence at Worthing Magistrates’ Court and Jeffery admitted the offence.’

Photographs taken at the scene show the extent of the damage caused to the traffic lights and the vehicle involved, which included a smashed windscreen.

Boris Johnson could 'modify' the lockdown BEFORE the May 7 deadline
Ex-Miramax assistant who was first to break NDA with Weinstein calls for end to the gagging culture
Jeremy Corbyn fans admit interview with Andrew Neil 'horrific'
San Francisco residents put two dozen boulders along sidewalk to keep homeless people away
Hunt for hit-and-run driver who left teenage boy, 13, fighting for life
Ruth Davidson blasts Boris Johnson saying there are 'questions' over his decision to shut Parliament
'I spy with my little eye': CIA launches Instagram account with hidden clues in first photo
Earthquake rocks Nepal: 4.8-magnitude quake strikes shake Kathmandu with tremors felt in India too