A drunken mother and daughter abused cabin crew staff and even threw a punch at one, sparking a mid-air ‘riot’ after being repeatedly asked to stop swearing in front of other passengers, a court has heard.

Staff on the easyJet flight from Manchester to Agadir in Morocco, which had 186 passengers on board, tried to calm the two women down but Carrie stuck her fingers in her ears and said: ‘I’m not listening to that vile c**t.’

The captain of the aircraft eventually diverted to Casablanca after staff told him the rear of the cabin where the group were sitting was ‘out of control.’

During the rampage it was alleged Karin swung a punch at a steward while Carrie had to be forcibly held down by other passengers after she demanded to use the toilet when the plane was coming into land.

The two women both deny being drunk on aircraft. Karin Parkes also denies assaulting a member of cabin crew.

A third passenger Jonathan Thomas, 36, also from Blackpool denies being drunk on an aircraft. 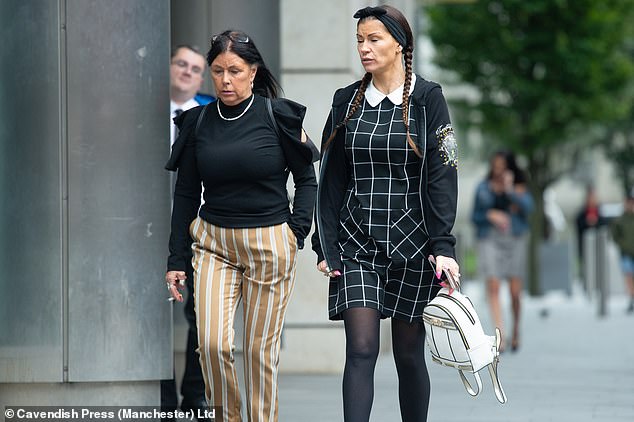 Karin Parkes (left) and daughter Carrie leaving Manchester Magistrates Court, where they are accused of abusing and attacking cabin crew while drunk 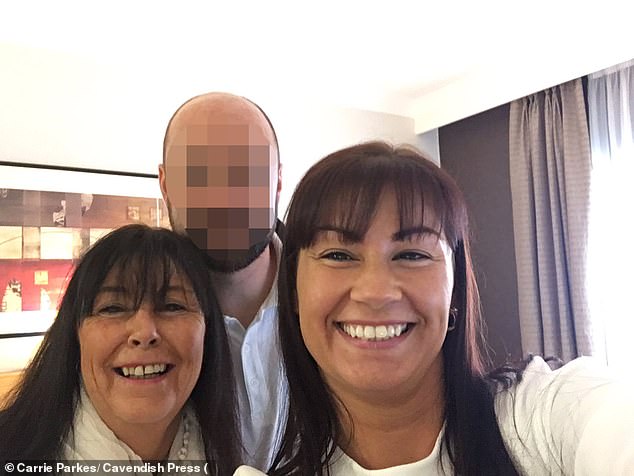 An almost empty one litre bottle of Gordon’s Pink Gin and empty bottles of vodka were found near their seats.

A cabin manager also urged the group to refrain from using bad language but was told: ‘You can f*** off you c**t. Do what the f*** you want I’m not a**ed. We will see what happens.’

The mother and daughter, both from Blackpool, Lancashire, were later detained by police.

Manchester Magistrates court was told the incident on January 19 last year began after flight EZ1905 took off at 3.30pm from Terminal One, Manchester.

Nick Smart prosecuting said: ‘One hour into the flight crew members at the rear of the aircraft had to ask a large group of males and two females to keep the noise down.

‘Later the cabin manager spoke to all of them but whilst addressing them he heard one say: ”you can f*** off you c***”.

‘He formed the view they were intoxicated and decided no more alcohol would be served.

‘But on several more occasions the group had to be told to keep the noise down by various crew members. When told to quieten down Carrie Parkes put her fingers in her ears and said ”I’m not listening to that vile c**t”. 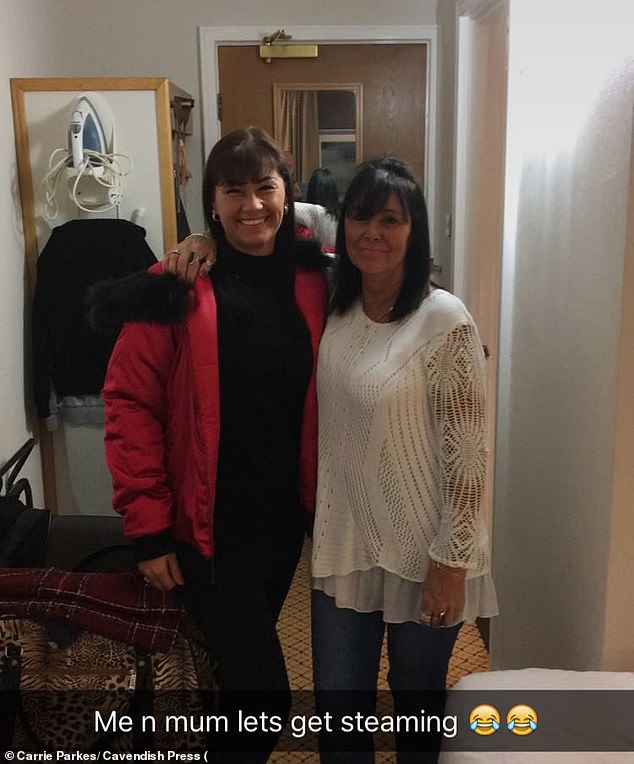 An almost empty one litre bottle of Gordon’s Pink Gin and empty bottles of vodka were found near their seats. The mother and daughter, both from Blackpool, Lancashire, were detained by police after the flight landed

‘Karin Parkers then punched Carrie in the arm and told her not to speak to the crew like that.

‘It would appear their eyes were becoming more red and glazed, Carrie Parkes was noticeably more drunk – her eyes were redder, more glazed and she fell off her seat she was trying to kneel on it.

‘A little later on crew members decided it was time to collect rubbish it was discovered that a one litre bottle of Gordon’s Pin Gin sticking out of a bag with only a small amount left in.

‘That bottle and other empty bottles were recovered. The cabin officer heard Carrie Parkes shout more abuse and he began to explain to her that the captain had been already warned regarding the situation and she was told if it continued he would be further informed.

‘But at this stage Karin Parkes came up to him shouting at his face saying he showed no duty of care towards Carrie. 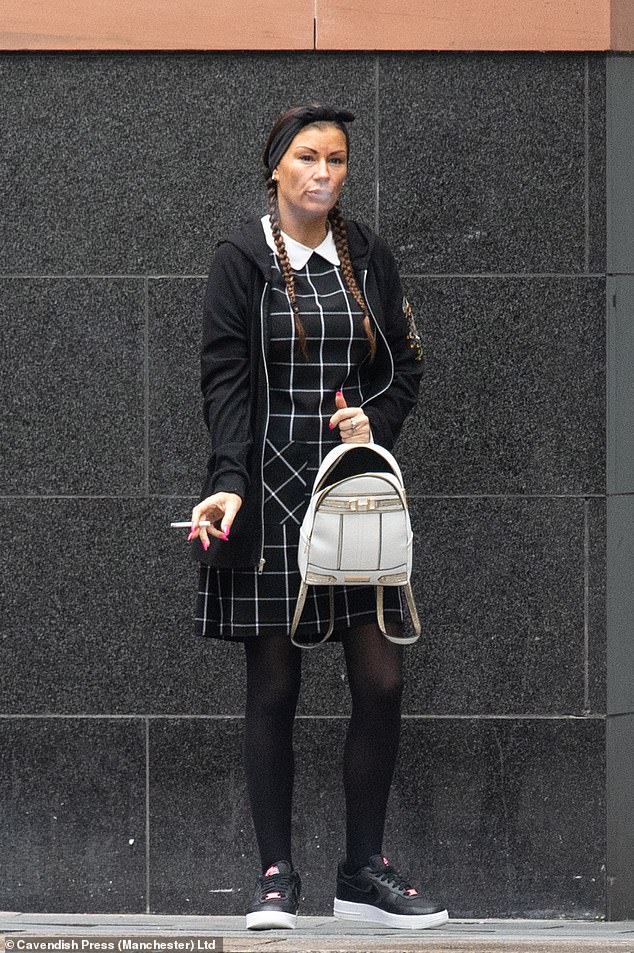 Carrie Parkes outside Manchester magistrates court. The pilot diverted the flight to Casablanca after the ‘riot’

‘He considered she was drunk as she smelled strongly of alcohol, her eyes were glazed and she had stumbled towards him. She then swung her arm towards him with a closed fist her knuckle slid past his jaw. Other passengers got out of their seats trying to hold her back it was decided to divert the plane to Casablanca.

‘The seat belt signs were illuminated but Carrie Parkes was shouting she needed the toilet. She stood up and was held down by nearby males but stood up again and refused to sit.

‘When the plane landed Carrie Parkes at first refused to leave and began swearing at the cabin crew before eventually leaving somewhat violently.’

Cabin manager Liam Dickson told the hearing: ‘There were people at the back being loud and using bad language and I went down and addressed this.

‘But as I turned away I heard abuse being thrown a me. I knew it was the daughter’s voice because I had just been talking to her. I said there is no need to speak to me like that but she wasn’t interested – I could tell she had had a few drinks.

‘Her mother was trying to control her trying to knock her on the arm and initially it did reassure me. But later there was more commotion and there was a couple of bags of alcohol being removed which they had been consuming on board the plane. It was very rowdy at this point there was a lot of swearing going on.

‘I was trying to calm everyone down but there was now people stood up, there was bad language they were still being really abusive towards the crew. The mother did listen but the daughter didn’t.

‘The group even had their own speakers on board and that was playing quite load, I said these needed to be switched off and I didn’t serve any more alcohol on that aircraft.

‘But they were getting louder and louder I could smell alcohol on the mother. The daughter was with two men beside her and she was punching the seats.

‘Her eyes were glazed she was very red in the face. She was trying to kneel on the seat but kept falling back.

‘Then the mother started coming towards me she was staggering towards me and again I could smell alcohol. Her words were ”You’ve got no duty of care for my daughter” and she did actually put her fists up towards me. I managed to step back her knuckles did catch the right side of my jaw. She was very close. She was just out of control. 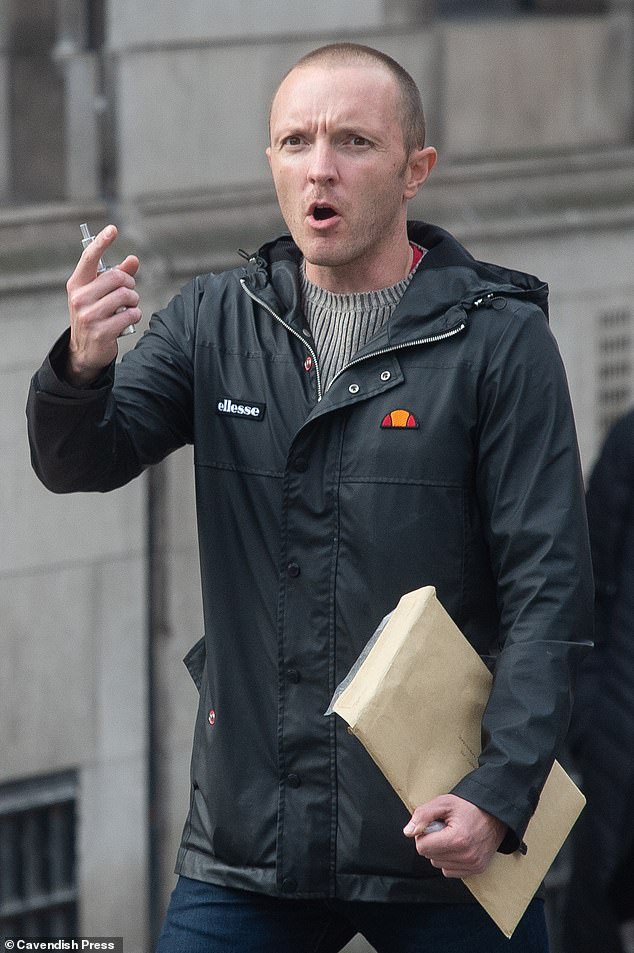 A third passenger Jonathan Thomas, 36, also from Blackpool denies being drunk on an aircraft

‘There were lads at this point who had jumped out of their seats and I didn’t know if they were coming to protect or attack us. I stepped back and there was quite a big passenger who had grabbed Karin by her arms and dragged her to the back galley.

‘There was a lot of fists flying around with other passengers. It was as if there was a riot happening at the back of the cabin and there were at least 15-20 men stood up at this point and I was very concerned.

‘I actually went into the flight deck to tell them that the cabin was out of control and a full on fight was happening. I requested a divert straight away, the captain just asked me to keep it under control.

‘The whole plane knew what was happening and Carrie was screaming and shouting – she was out of control and the crew members were trying to advise her to get back in her seat she was up in the aisle as we were landing. Carrie took a while to get off – she was in the galley crying to the crew members. There was a lot of kicking off, screaming, shouting.

‘She had her fingers up towards the passengers telling them to ”f*** off” she made quite a big scene while she was getting off the aircraft.

‘It did play on my mind for a long time in the way they was trying to physically assault myself and crew members.

‘It a very hard situation to deal with. They were out of control threatening and abusive.’

Air stewardess Beth Halliwell said: ‘There was a lady passenger who asked if she could she move seats saying: ”they are doing my head in.”

‘It then got out of control and I started to see people jumped up and arms flailing. My colleagues were very shaken up like we had lost all control of the cabin. When I got towards the back there was a lot of shouting and swearing going on towards Liam.

‘Carrie was abusing him. We tried to tell Carrie to sit back down until we were on the ground and it was safe but she would get back up again. I remember Karin shouting: ”this is all your fault” and it seemed like Carrie was shouting across. I was quite scared.

‘Karin seemed regretful for it getting out of hand but her speech was quite slurred. I have never been so scared in my life at work it was very intimidating it was just not a nice experience at all.’