The Duke and Duchess of Cambridge were all smiles as they arrived at Wimbledon today for the final day of the Championships.

She also proudly wore her green and purple bow brooch, which is a nod to her patronage of the All England Lawn Tennis and Croquet Club. 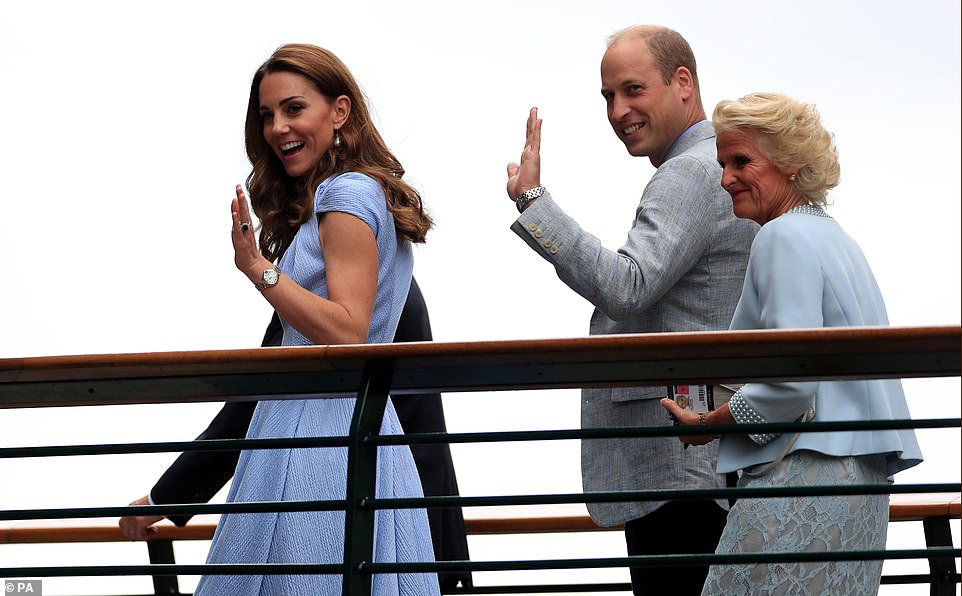 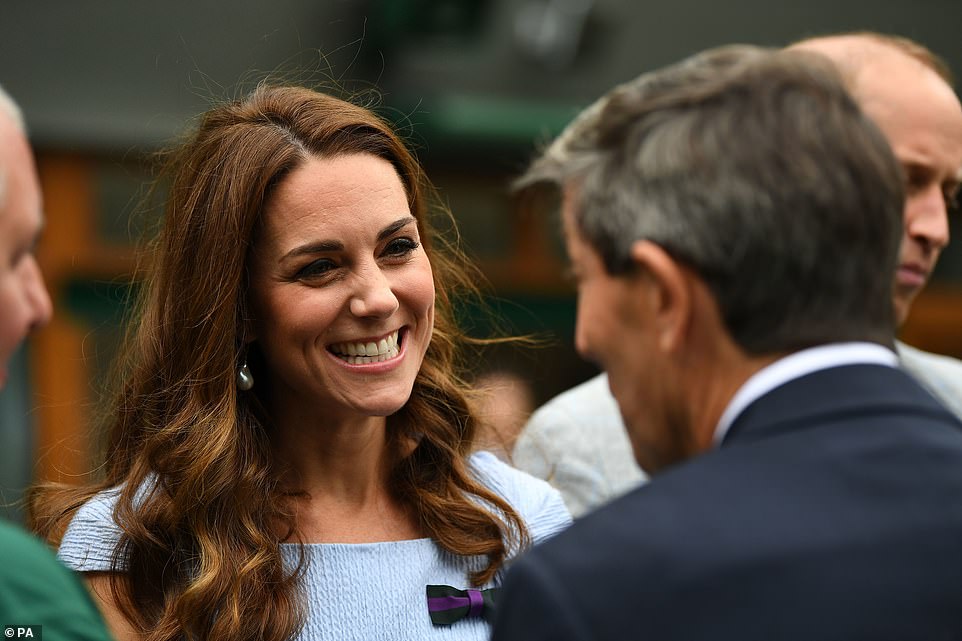 Yesterday Kate made her way to the grounds early to attend a lunch for club members and former champions in her role as patron.

The Duchess looked glamorous in a bespoke green D&G midi dress, estimated to have cost £2,150, previously worn in 2016 on a visit to Kelowna, during a royal tour of Canada, and completed the look with a cream handbag from the same brand.

She was then joined by sister Pippa and sister-in-law Meghan Markle, with the two duchesses putting rumours of a royal rift to bed as they were seen laughing and joking.

It was their second joint appearance in a week, after attending a charity polo match on Wednesday with their children to cheer on their competing husbands. 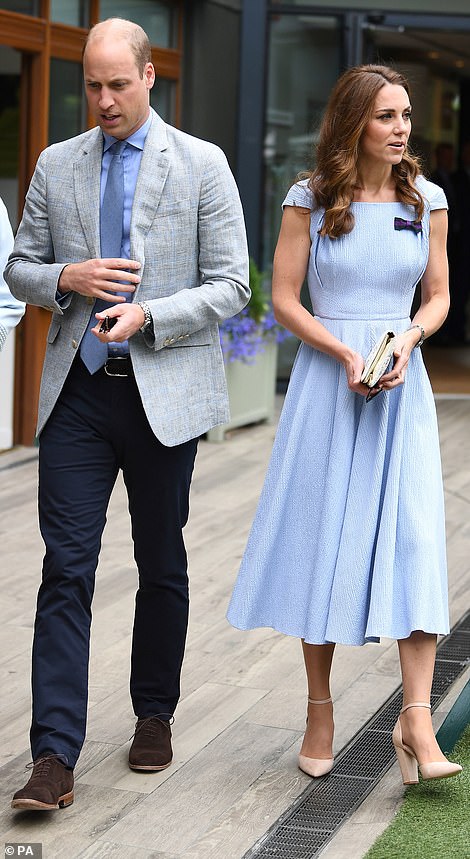 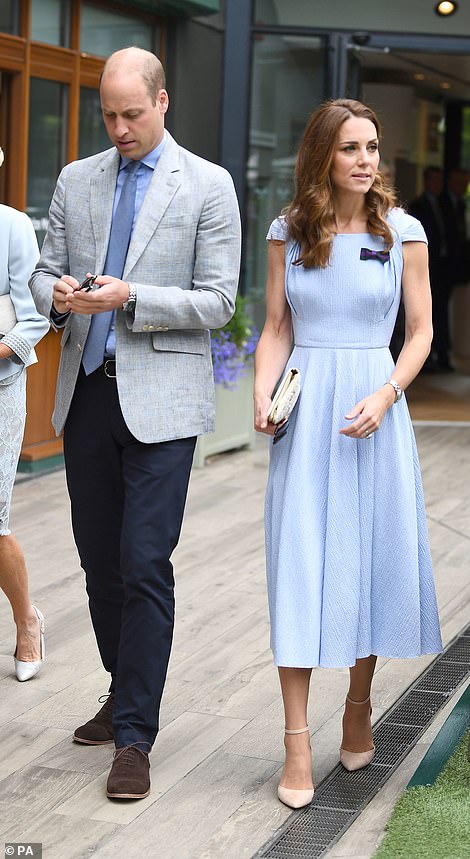 Kate looked stunning in a chic baby blue gown with elegant capped sleeves and square neckline, which she teamed with nude pointed heels 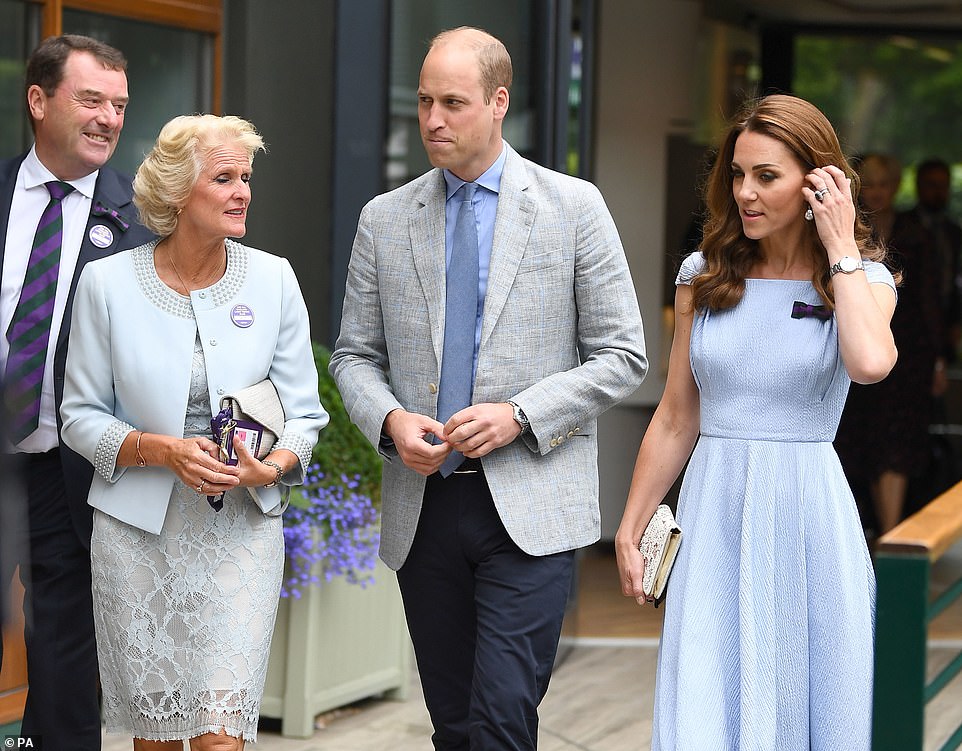 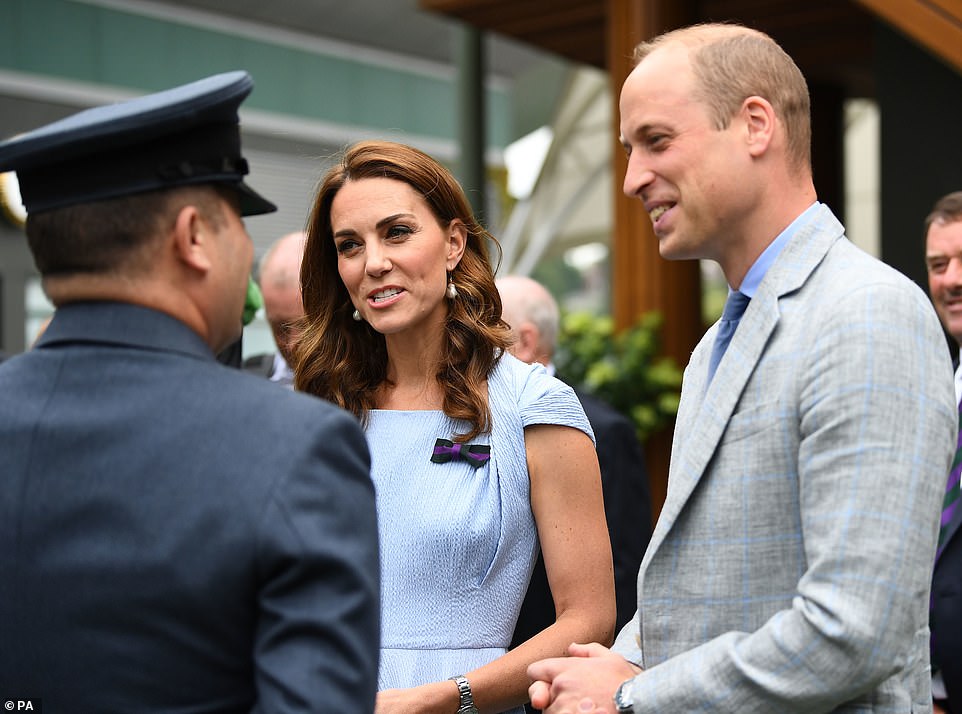 Tennis fan Kate has already attended this year’s Championships several times, including yesterday – where she was joined by sister Pippa and sister-in-law Meghan 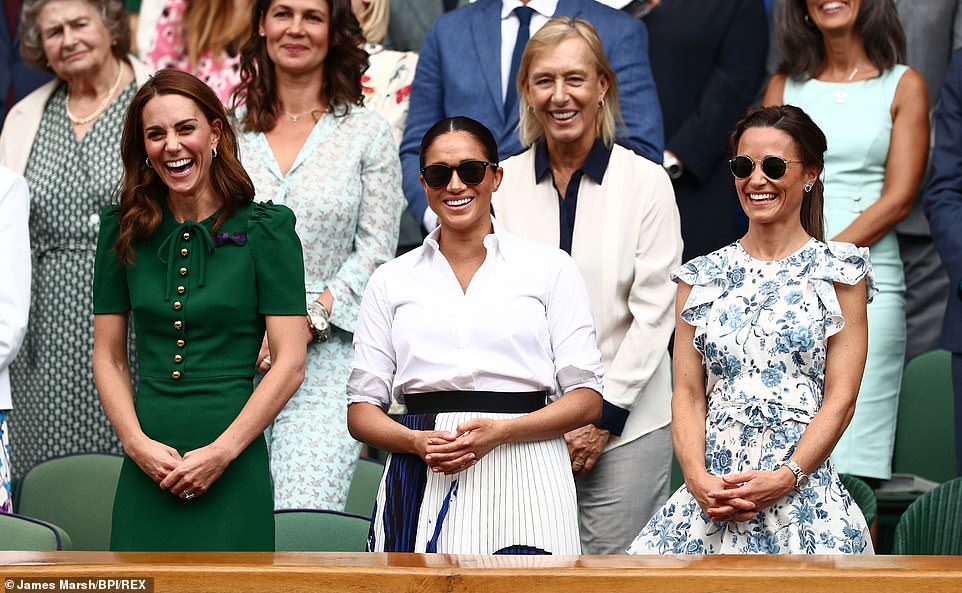 Delighted Duchesses! Kate and Meghan were seen laughing together in the Royal Box at Wimbledon as they put on a united front during the Women’s Singles Final, alongside Pippa Middleton 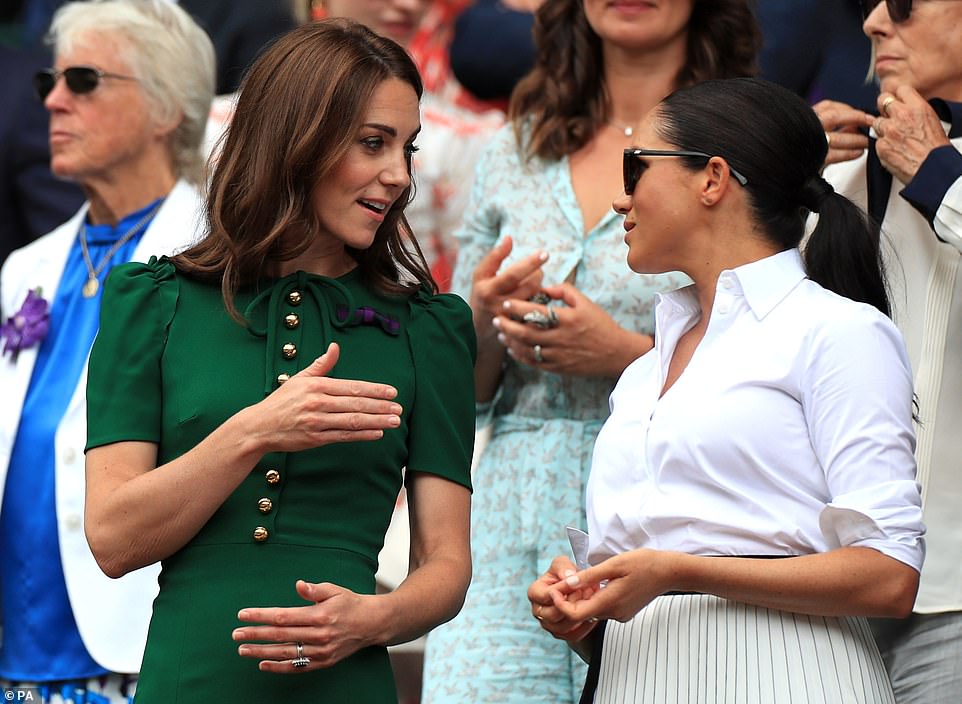 Firm friends: The Duchesses gave each other their full attention as they engaged in conversation at the end of the Ladies Singles Final at Wimbledon

Meghan was cheering on pal Serena Williams – who lost to Romanian Simona Halep – and opted for a crisp white shirt teamed with a pleated £350 Boss midi skirt, with an abstract blue and black pattern.

It was the second time in a week that the duchess attended to see her friend play, although her last visit caused controversy after bodyguards told fans not to take pictures of her, and she flouted rules by wearing jeans in a members’ only area.

The controversy came just days after Meghan and Harry faced a public backlash for insisting on keeping their son Archie’s christening completely private, and refusing to reveal the names of his godparents. 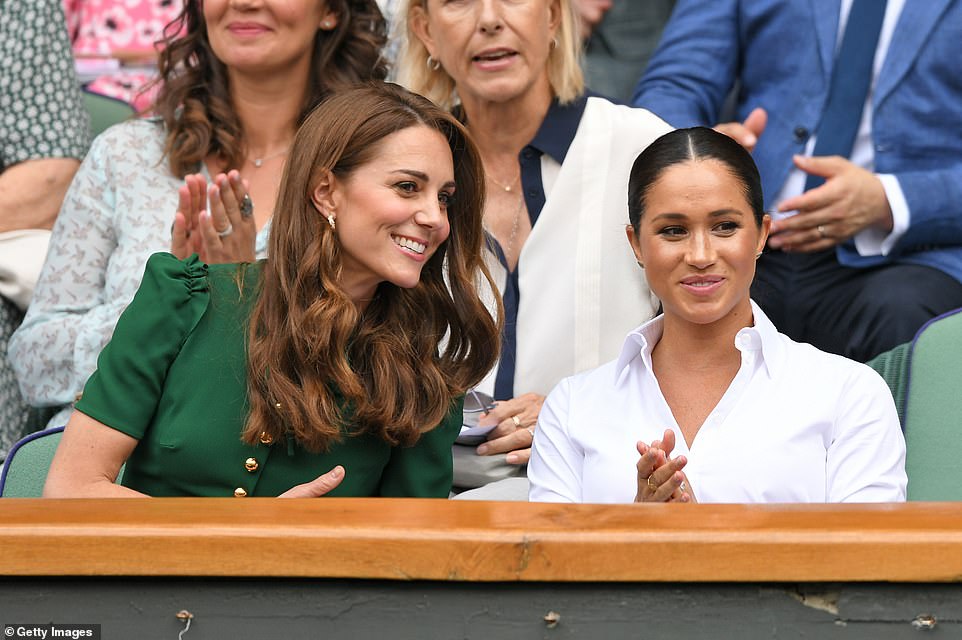 No feud here! The duelling Duchesses seemed to be getting on famously as they exchanged smiles in the Royal Box, ahead of the Wimbledon Ladies Singles Final 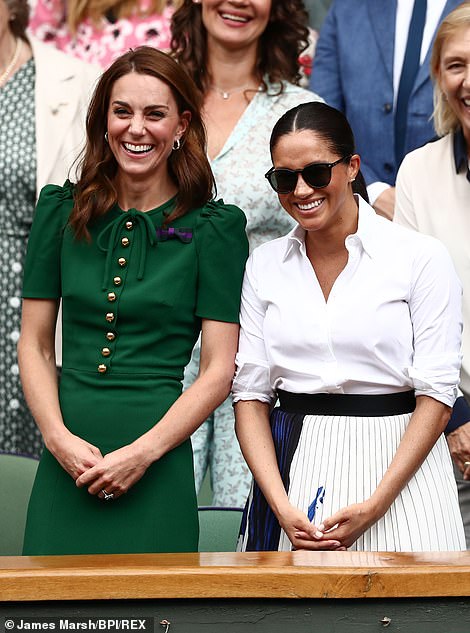 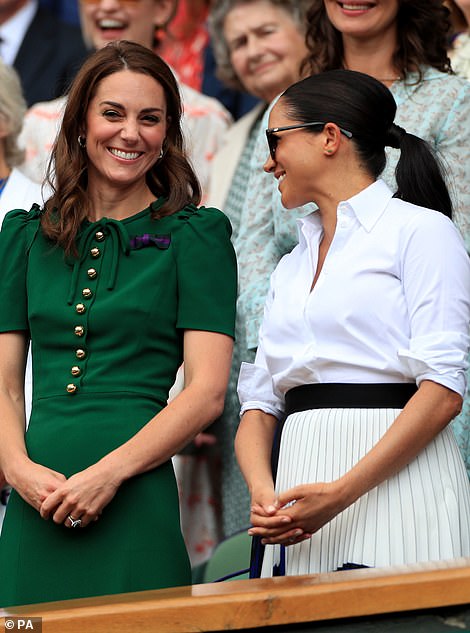 United front! Kate and Meghan laughed delightedly in the Royal Box and even leaned in so that their arms were touching. Meghan was seen glancing to her sister-in-law as they enjoyed a laugh at the end of the Ladies Final 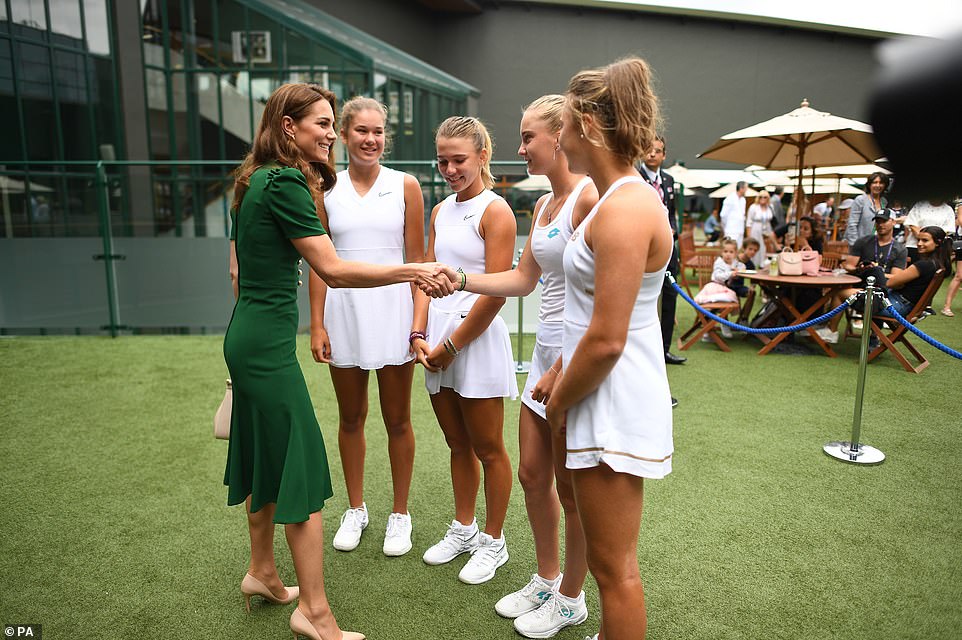 The Duchess of Cambridge meets (left to right) junior players Kamilla Bartone from Latvia, Oksana Selekmeteva from Russia, Polina Kudermetova from Russia and Giulia Morlet from France ahead of the Women’s Final