Mr Rutte tore into Tory hardliners for blocking an agreement – demanding they ‘wake up’ and avoid an ‘unacceptable’ outcome.

The attack – which Mr Rutte insisted came from one of the UK’s ‘best friends’ came as Theresa May desperately struggles to find a way through the Brexit impasse.

With wrangling over the Irish border backstop intensifying and a Tory Remainer revolt threatening to spiral out of control, the PM met the German Chancellor for breakfast at a summit in Egypt. 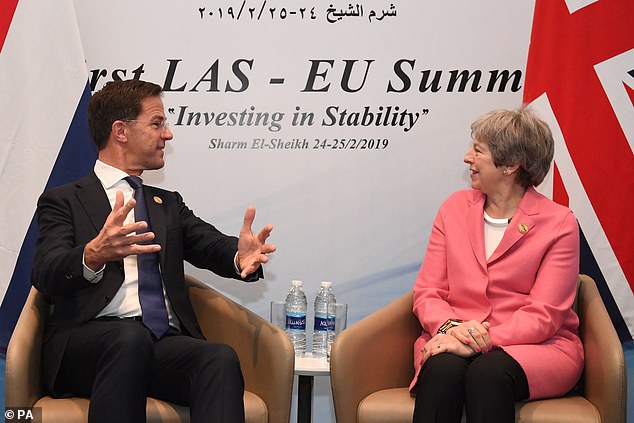 Dutch PM Mark Rutte (pictured left with Mrs May today) delivered a stark warning that the UK is ‘sleepwalking’ into a no-deal Brexit, urging hardline MPs to ‘wake up’ and approve an agreement

Mrs May admitted yesterday that she has yet to secure a revised deal – and said a final vote on a package might not happen until just 17 days before the UK is due to leave the EU.

She has been left pleading for Remainer ministers not to crash her strategy by joining efforts to force a Brexit delay in crunch votes on Wednesday.

But there are few signs that she can hold back the rebellion, after ministers openly threatened to defy her, warning that the ‘dam is breaking’.

Senior EU officials are believed to be preparing for a longer extension to the Article 50 process than the few months being mooted by Remainers.

The idea could see the UK stay a member for another 21 months to avoid a ‘cliff edge’ and give more time for a deal to be reached – or better preparations to be made for no deal.

The issue of postponing Brexit came up ‘fleetingly’ during the discussions between Mrs May and Mrs Merkel today, according to Downing Street. But a spokesman said the PM simply repeated that she wanted the UK to leave with a deal on March 29.

Mrs May had a bilateral meeting with on Monday, said the UK needed to ‘wake up’ about Brexit.

Mr Rutte told the BBC: ‘I will be straightforward. The Netherlands is one of your best friends.

‘What you guys are doing – leaving EU in this time of insecurity in the world, instability in EU – is the wrong decision.

‘Then having a process that might lead to no deal – it’s four weeks until the end date and still the UK has not agreed a position.

‘So, now we are sleepwalking into a no deal scenario. It’s unacceptable and your best friends have to warn you.

‘Wake up. This is real. Come to a conclusion and close the deal.’

European Commission spokeswoman Mina Andreeva said that in their meeting, Mrs May and Mr Juncker ‘took stock of the work done over the last days by their teams’ and agreed on ‘the need to conclude this work in time before the European Council on March 21’. 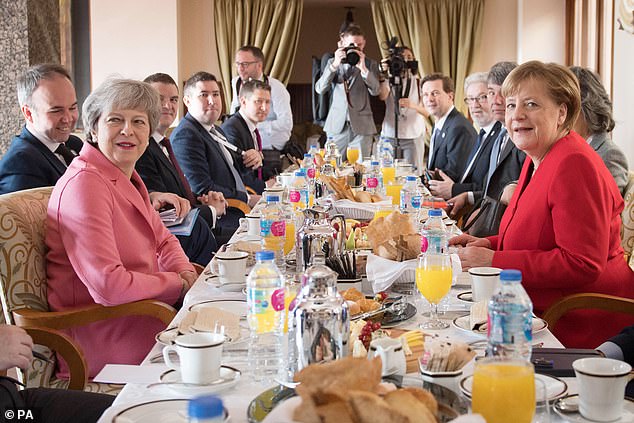 Theresa May (left) had a breakfast meeting with German Chancellor Angela Merkel (right) at the EU-League of Arab States Summit in Sharm El-Sheikh, Egypt this morning

Challenged on whether this would leave enough time for the European Parliament to ratify any final deal in time for Brexit day on March 29, Ms Andreeva told a Brussels press briefing: ‘Institutions are very well capable to act swiftly and take decisions when needed.’

‘Good progress’ was being made on the political declaration on future relations, proposed work on finding alternative arrangements to keep the Irish border open and possible additional guarantees on the backstop, she said.

Chief EU negotiator Michel Barnier will meet a UK team in Brussels on Tuesday ‘to take work further in this constructive spirit’.

Ms Andreeva described as ‘pure speculation’ reports that the EU was considering a lengthy extension of the Article 50, perhaps to the end of 2020.

‘Neither of these two has happened so far which is why our working assumption remains that the UK is leaving on March 29 2019.’