SET amid the poverty-blighted urban sprawl of East London, Brampton Manor Academy is a world away from Eton College’s well-kept playing fields.

For two thirds of Brampton’s sixth form, English is a second language and half get free school dinners.

With fees of £40,668 a year, Eton — in the shadow of Windsor Castle in the picturesque Berkshire countryside — has produced 19 Prime Ministers.

But don’t dismiss the possibility of a future Brampton-educated PM just yet. For the state school is celebrating after 41 of its students received offers to study at Oxford or Cambridge — the second highest in the country.

Brampton has left big-league, expensive public schools in its wake. Dulwich College has had 26 Oxbridge offers, Charterhouse just 24. Only Eton, with 68, has had more.

The London Borough of Newham, where Brampton is located, has more children living in poverty — 36,780 — than anywhere else in the capital.

One Brampton pupil to be offered an Oxbridge place came to Britain as an unaccompanied minor five years ago, while others have been in care or were refugees. The school’s success is an uplifting tale of gifted youngsters beating life’s odds.

Student Dorcas Shodeinde has been in care since she was 14. She is elated after receiving an offer to study law at St Catherine’s College, Oxford.

Rama Rustom, 17, who has Palestinian and Syrian parents, arrived in Britain as a refugee from Saudi Arabia in 2013. She has been offered a place to read English at St Hilda’s College, Oxford.

Victor Idowu, who is from a single-parent family and receives free school meals, will be the first in his family to go to university.

Dorcas Shodeinde, in care since 14: Law at Oxford 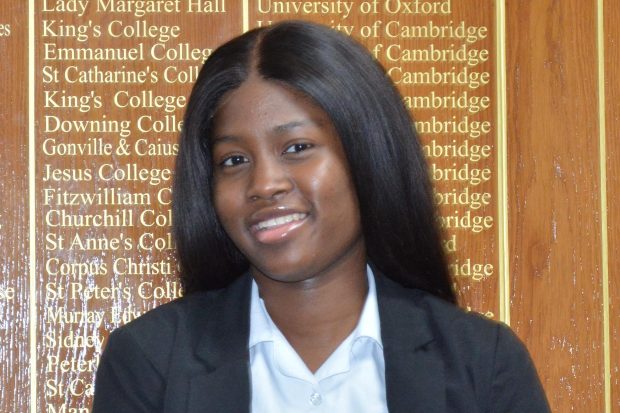 ELATED Dorcas, 17, had two important phone calls to make after she learned she had an offer to study law at St Catherine’s College, Oxford.

The teenager, who has been in care since she was 14, said: “First I rang my foster mum and then I rang my actual mum. Both of my mums were so excited.

“When I was put in care because of family difficulties, all I knew was that statistically care leavers don’t do very well.

“But I wanted to prove that it’s not the end of the world and show my foster-sister that you can change the outcome of negative experiences. I was determined that my future would be different.”

However, she admitted: “I nearly didn’t apply because I was scared of leaving London and figuring out where I’d live during half-term and after I graduated.”

He has an offer to study medicine at Selwyn College, Cambridge.

Jeffery Maya, 17, has been offered a place at Pembroke College, Cambridge, to read natural sciences. He said: “You don’t see a lot of people around Newham going to college. A lot of people get into illegal stuff.”

So how is Brampton producing such excellence? The school aims to instil a self-belief in its pupils that any Etonian would be proud of.

Its director of sixth sorm, economics teacher Sam Dobin, believes the school motto — Success Through Effort And Determination — sums up its mission statement. 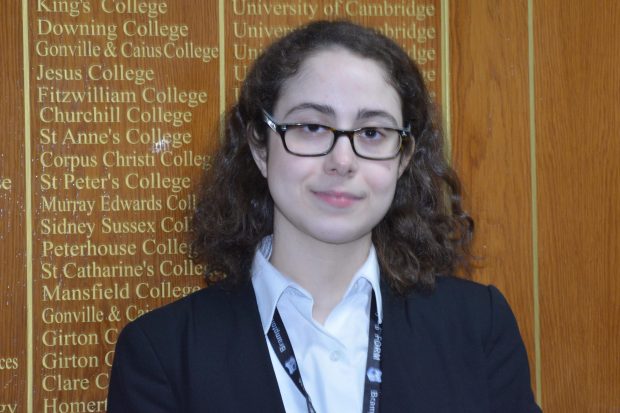 RAMA is the daughter of Palestinian and Syrian parents and arrived in Britain as a refugee from Saudi Arabia in 2013.

The 17-year-old has been offered a place to read English at St Hilda’s College, Oxford.

She said: “My first language is Arabic and lots of people outside of school said I couldn’t do it, but my teachers always believed in me.

“For me, this offer sets my family on a new path.

“In my culture, women are traditionally told not to pursue education. I’m trying to prove that girls can do it too.”

He said: “We tell our students, ‘No one has won a race they haven’t started’. We tell them to believe in themselves. It’s about high aspiration.

“We have a very traditional approach, no gimmicks or shortcuts.”

A Cambridge graduate himself, Sam added: “We say to students, ‘Do not be intimidated. You will meet people who don’t speak the same way or look the same way as you, but they’re no more intelligent and no more worthy than you are’.

“We don’t get all our black students into a room and say, ‘This is something you can achieve because you’re oppressed’. We say, ‘You’re good enough’. 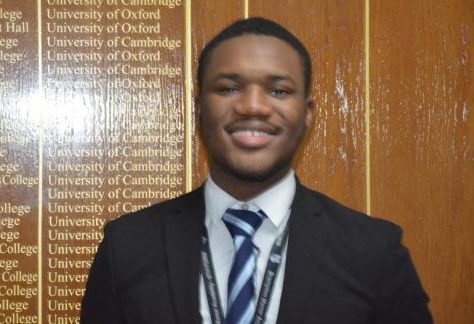 VICTOR, who is from a single-parent family and gets free school meals, will be the first in his family to go to university.

He has an offer to study medicine at Selwyn College, Cambridge.

Victor explained: “This is something that I have wanted my whole life. It’s made my family really proud.

“The application process was challenging but being surrounded by other students going through the same thing made it a lot less daunting.”

“We think it’s a dangerous message to spread that the only way you’ll succeed is to become more like students from traditional backgrounds.

“There is no traditional background for Oxbridge, it’s about your academic talents. We don’t think they should be defined by where you’re from.”

As for mixing with students from Eton and other public schools when they get to Oxbridge, Sam said: “Fundamentally there’s no difference.

“They might have had different life experiences but what binds them when they go to these universities is talent. Oxbridge is becoming increasingly diverse.” 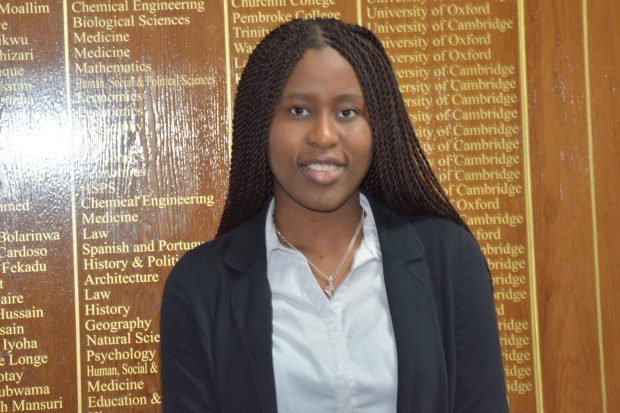 THREE years ago Blessing was unable to speak English – but now she has been offered a place to study medicine at St Anne’s College, Oxford.

Blessing came to the UK when she was 15 and attended a failing secondary school before arriving at Brampton Manor.

She said of the offer: “It felt like all my work was worth it. My family were very happy for me and proud of what I have achieved.

“Attending Oxford University is something I couldn’t have imagined. I wasn’t sure about applying at first because I didn’t think that I would get in.

“Support from my school has given me a lot more confidence in myself.”

Yet self-belief can only take you so far. Brampton, which chooses its 600 sixth formers on academic ability, also buys each one their own textbooks to encourage independent study. And it uses cash from the Pupil Premium — the extra Government money given to raise academic results in disadvantaged communities — on funding a study centre.

It is open and staffed from 6am to 7.30pm, with many students working there until it closes.

Sam said: “You do get students in at 6am. You might see 50 students in the study centre at times.”

The school does not rely on supply teachers and has high staffing levels, including five Oxbridge graduates.

Brampton’s director of sixth form, Sam Dobin says ‘Oxbridge is about academic talent, not where you are from’[/caption]

THE staggering achievements of Brampton Manor should inspire every state school.

It’s an academy in Newham, London — one of the country’s poorest areas.

Yet 41 sixth-formers this year alone have got Oxbridge offers. Nearly all are ethnic minority kids, most of them the first in their family ever to go to university.

Plus tireless and dedicated staff.

Sam added: “We over-staff as a school. In economics we have 1.5 more teachers than we need.

“That gives you the opportunity to break out and have students work in smaller groups and cover staff absence. But staff absence is very low at the school because teachers want to be here teaching these students.

“We believe putting our students with staff who have had the experience themselves is going to help them aspire to achieve.

“The students that come to us in the sixth form come here with good GCSE grades and a desire to go to university, and when they’re surrounded by other students who want to do the same thing and teachers who teach them well, that’s how it goes.”

Parents are also encouraged to be aspirational for their youngsters.

No one can doubt the results. Brampton Manor Academy, rated “Outstanding” by Ofsted, only opened its sixth form in 2012.

Its first year of Oxbridge applications led to one offer, the following year it was five. Last year it was 25 and now it has reached 41.

There is an honours board proudly displayed at the school with the names of every pupil who has won a place at Oxford or Cambridge.

Boy, 4, is nearly run over after wandering alone out of school gate

Speedboat killer Jack Shepherd 'is hiding from justice in Thailand'

And it’s not just to Oxbridge — pupils are also gaining places at universities across Britain in remarkable numbers.

Sam said: “We’ve got the highest progression rate to university of any school in the country — over 90 per cent.”

Despite Brampton’s success, there is still a long way to go for state school pupils. Just seven per cent of children go to independent schools, but 42 per cent of Oxbridge places go to privately educated kids.

Yet Brampton’s hard-working and aspirational youngsters prove that our state schools are also brimming with often untapped academic talent.

Idris Elba’s daughter Isan, 17, upstages her dad at Golden Globes
You can get a free £15 pizza from Dominos using this exclusive offer code
Labour voted AGAINST knife crime crackdown backed by Government and London Mayor
Is Facebook down? Huge Facebook, Instagram and WhatsApp outage CONFIRMED
Chelsea and Tottenham monitor Newcastle captain Jamaal Lascelles ahead of January swoop
Maureen Lipman reveals her late husband ‘sent her a sign’ to join Coronation Street cast as ‘monster...
Conspiracy theorist Max Spiers told his mum to ‘investigate’ if anything ever happened to him, an in...
Gordon Ramsay ‘teaches’ six-month old son Oscar to drive in £1.5m Ferrari being loaned to him