Employers are revealing the brazen questions job candidates have asked at the end of their interviews, proving that some people have no problem saying what’s on their minds.

Reddit user AeonArcore sparked the conversation by asking: ‘Employers of Reddit, what’s the most memorable “Do you have any questions” question you’ve received in an interview?’

The questions that were shared in the discussion were mostly red flags for the employers, but some people were happy to recall the responses that impressed them the most. 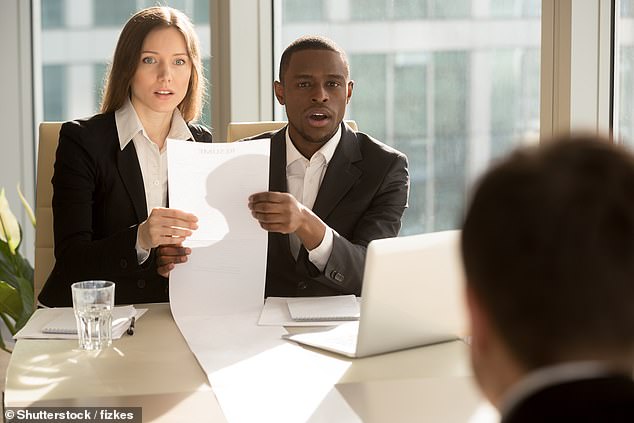 Hard to forget: Reddit users have shared the ‘most memorable’ questions potential employees have asked at the end of their job interviews

Warning signs: Many people wrote about the red flags that came up, with interviewees asking about the drug policy and paid leave before they were even hired

One person noted that people have asked about drug testing and leaving early, but the question that really stood out was more thought-provoking.

‘Most memorable though would be the person I am interviewing ask me, “If another company offered you the same salary for the same job to quit and come work for them, would you take it and why/why not?”‘ the Reddit user recounted.

Others said they were boldly asked, ‘Do you have any hesitation in hiring me today?’ or ‘When do I start?’ In some cases, the questions worked in the interviewee’s favor.

‘I was actually the one that issued the question,’ one person revealed. ‘Was told by my boss recently, that during my interview the last question I asked was “When can I expect your answer,” which she immediately had to laugh about, but it showed her that I was very confident in my abilities and it was actually the reason she hired me.’

However, then there were those who asked questions that were so outrageous their intentional employers didn’t know how to react.

‘They asked, “Can my mom sleep on the couch in the office during work so she doesn’t have to drive all the way home and back to take me to work?”‘ one boss recounted. 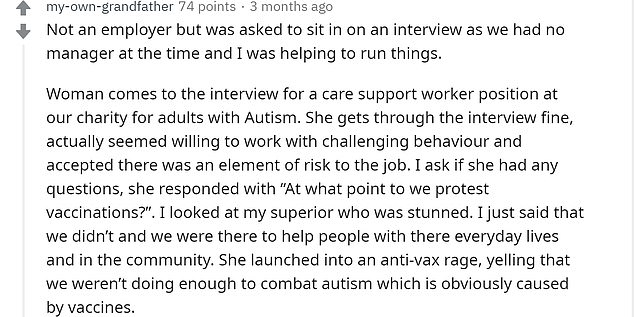 Say what? One woman wanted to know if there was ‘math involved’ in engineering, while another asked about protesting vaccines at an Autism charity

Another shared how a woman who was interviewing for a care support worker position at a charity for adults with Autism blew it at the end of their discussion.

‘I ask if she had any questions, she responded with “At what point to we protest vaccinations?” I looked at my superior who was stunned,’ the Reddit user recalled.

‘I just said that we didn’t and we were there to help people with there everyday lives and in the community. She launched into an anti-vax rage, yelling that we weren’t doing enough to combat autism which is obviously caused by vaccines.’

A few people made it clear that they didn’t have any idea what type of job they were applying for when they asked their questions.

‘I was interviewing a young woman for an engineering position. She said she had an engineering degree, had recently graduated, and had no experience,’ one employer wrote. ‘I would have hired her, until she asked, “Is there any math involved? I’m not very good in math.”‘

‘I got asked “What is the job? My girlfriend made me come here,”‘ someone else recalled. ‘Try as she might, I don’t think he’s going to be successful lol.’

Man finally wins ‘fitness to work’ appeal against benefits bosses – seven months after his death
The Duchess of Cornwall attends a tea reception for the Booker Prize Foundation in London
SNL adds new featured player Ego Nwodim to roster for upcoming Season 44
Glastonbury 2019: Miley Cyrus puts on a VERY raunchy show in festival debut
Protest leaders in Ecuador accept talks with govt as...
Rough Guides reveals the 100 best places on earth to visit in 2020 from America to New Zealand
Theatre director, author and satirist Sir Jonathan Miller dies aged 85
Samantha Cameron reveals husband David is the cook in their home - while she does the washing up