England star Dele Alli has been blasted by football fans after he was filmed angrily ranting at staff at a five star hotel.

The Tottenham midfielder was filmed on a mobile phone alongside England teammate Ross Barkley as he argued with a receptionist in the foyer of The May Fair Hotel in central London.

The clip is believed to have been shot at 5am, the morning after the Three Lions beat Croatia in the Nations League at Wembley.

It was reported the pair wanted an upgrade to stay in the hotel’s £3,000 a night penthouse.

But representatives for Alli – who earns £150,000 a week – denied the claims, insisting he wasn’t even staying in the hotel.

On the clip, Alli, who was gesturing with staff, is heard saying: ‘Fourteen grand. Think I’ll put up with any of this sh*t?

However, it is difficult to make out the conversation over the narration from the man filming the scene.

The member of the public who filmed the row claimed it happened at ‘5 o’clock in the morning’ and alleged that both footballers were ‘p***** as anything’. 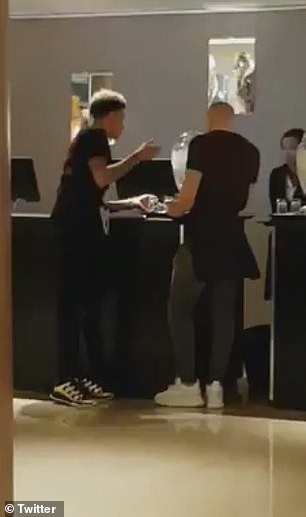 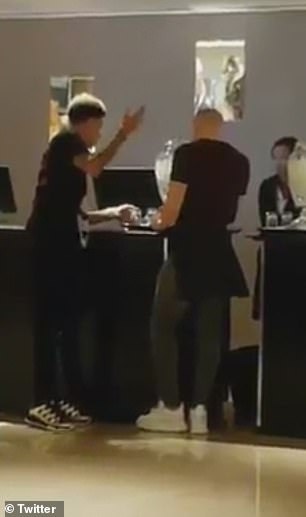 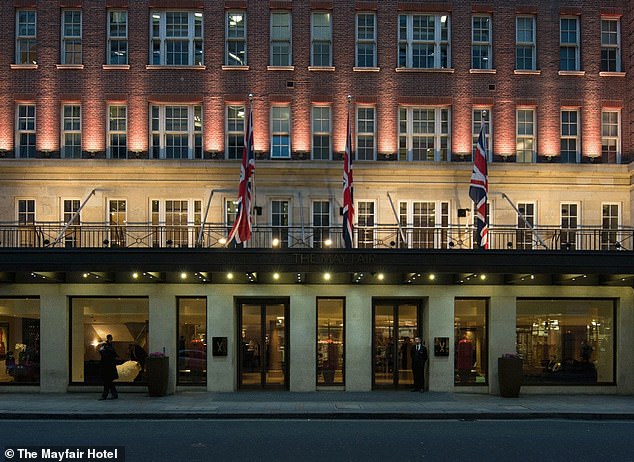 The man filming says: ‘Ross Barkley and Dele Alli, acting like a pair of c**** in here.

‘Dele Alli telling everyone he spent 14 grand in here. …Embarrassment, these are England players. Absolute disgrace.

‘These are England players, look, these are role models.’ 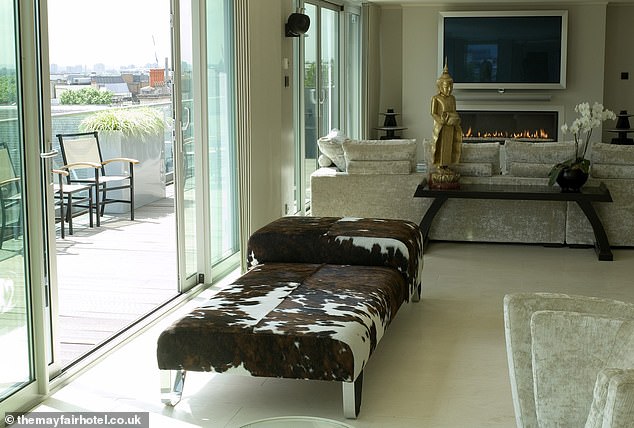 The member of the public who filmed the row claimed it happened at the five star May Fair Hotel  hotel in central London, pictured 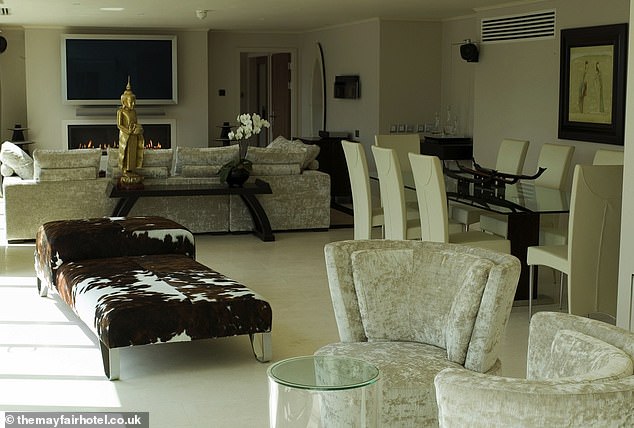 The £3,000-a-night penthouse suite at The May Fair Hotel in central London

One said: ‘Why do these arrogant overpaid under talented footballers get away with behaviours that nobody else would?’

Another said: ‘Dele Alli gets shown for the arrogant so called human being he is.

‘People bash the one that recorded it. This is what is wrong with the world. We get shown what celebrities are actually like and some don’t like it.’

And another said he should be reprimanded by England manager Gareth Southgate adding: ‘Players from clubs and especially the ENGLAND team must be exemplary.’

However, others defended the players and said the man who filmed it was hoping for ‘five minutes of fame’. 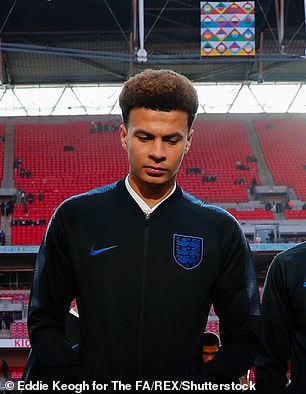 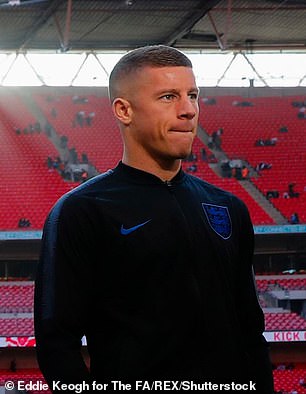 Dele Alli (left, before England’s game on Sunday) who appears in the video alongside Ross Barkley (right) signed a new six-year Tottenham deal last month to stay at the club until 2024. 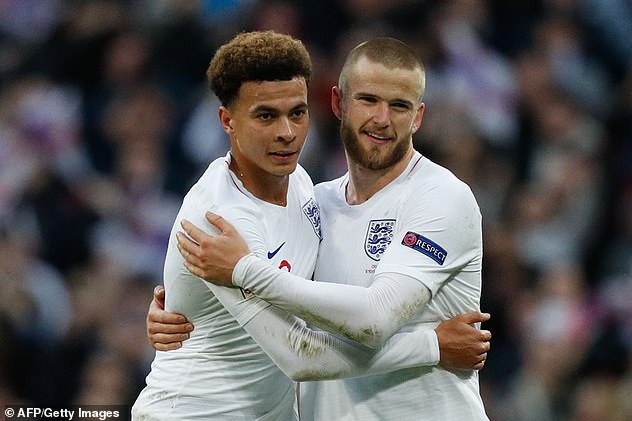 Some even labelled him ‘pathetic’ for trying to embarrass the players who were simply celebrating hard work.

Dave Reel said: ‘Looks more like an Arsenal fan trying to have a pop at Spurs and Chelsea players to me.

‘Doesn’t look like they’re doing much wrong to be honest. Couple of young lads returning after a night out.’

Another man added: ‘I thought the same. They’re young lads. Let them have night out for goodness sake’ 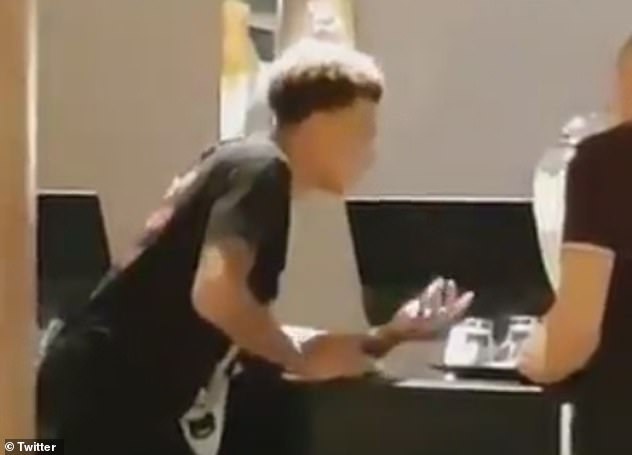 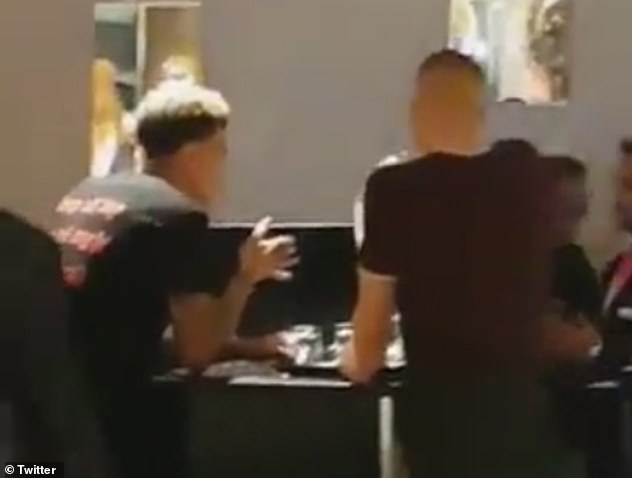 Dele Alli leans over the counter ans gestures towards staff

A member of staff is seen approaching the pair from behind and stands watch as Alli continues to press his point.

However, rather than chastise them, he appears to try and take a selfie with Alli, before the clip ends.

Alli signed a new six-year Tottenham deal last month to stay at the club until 2024. 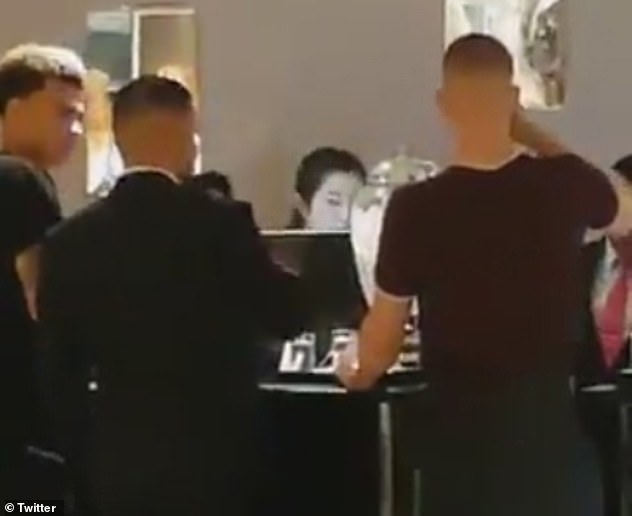 Barkley, who signed a £90,000-a-week deal at Chelsea in the summer, stands calmly next to Alli but is not heard speaking.

The central London hotel, Chelsea, Spurs and the FA all said they did not want to comment.

A spokesman for Alli said: ‘He was not staying at the hotel, so clearly could not have been demanding an upgrade.’