Cabinet Ministers were so alarmed by the behaviour of Esther McVey during last week’s tumultuous Brexit Cabinet meeting that they thought that ‘security would have to be called’, according to one senior figure present.

The former Work and Pensions Secretary – who resigned from the Government on Thursday in protest at Theresa May’s Brexit deal – was embroiled in a furious confrontation with the Prime Minister when she demanded a vote to formally record Ministers’ positions on the deal.

Ms McVey has angrily denied that she was in tears during the bust-up, saying: ‘I’m made of much sterner stuff than that.’ 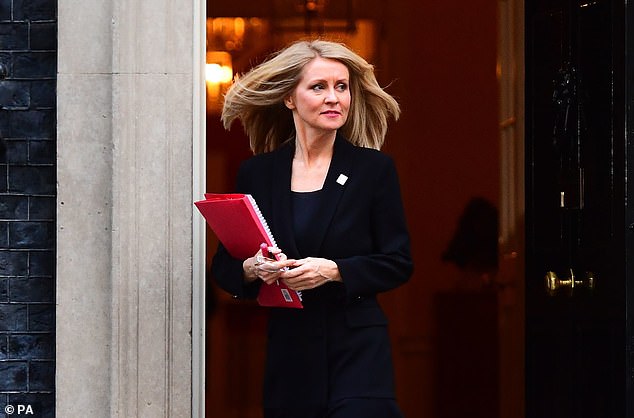 Ester McVey, pictured, has denied she broke down in tears during her final cabinet meeting when Theresa May unveiled her deal with the EU to secure her vision of Brexit 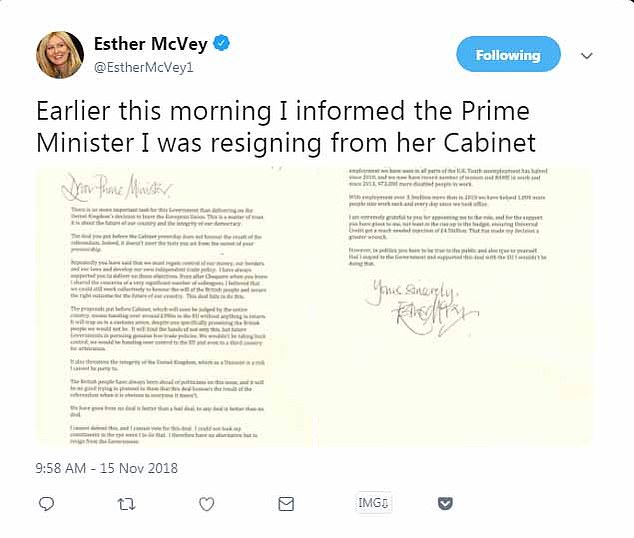 Hours after her Cabinet meltdown, McVey tweeted her resignation letter from Government

But one Minister present told The Mail on Sunday: ‘It was the most extraordinary meltdown I’ve seen in Cabinet. I thought security would have to be called, because she seemed so hysterical and aggressive. The Prime Minister tried to talk to her, but it was all just empty waffle which Esther talked over. So Julian [Smith, Chief Whip], just started shouting at her to shut up.’

Cabinet Secretary Mark Sedwill also objected to Ms McVey’s call for a vote to ‘put on record where everyone stood’.

Although Downing Street was shaken by the departure of Dominic Raab, they were relieved Ms McVey was the only other Cabinet Minister to resign.

No 10 were already planning to move Ms McVey in the next Cabinet reshuffle after being left unimpressed by her performance over the blighted Universal Credit system.

Last month, a bitter row erupted between Chancellor Philip Hammond and Ms McVey over claims of a £2 billion black hole in the flagship scheme.

Allies of Ms McVey have accused Mr Hammond of lobbying for her to be removed – and to be replaced by his deputy, Liz Truss – claiming the former TV presenter stood up to the Chancellor and got more cash for her Work and Pensions department. In return, the Tatton MP has been the subject of barbed comments. One Treasury source took aim at Ms McVey’s immaculate hair, saying: ‘The only thing she knows how to do well is a blow dry.’

The nationwide rollout of Universal Credit, which merges six benefits, has been plagued by delays and soaring costs.

The Treasury source added: ‘She’s a pain in the a*** and costing us money’.

In her resignation letter, Ms McVey said: ‘The deal you put before the Cabinet yesterday does not honour the result of the referendum. Indeed, it doesn’t meet the tests you set from the outset of your Premiership.’

She added that the deal would prevent future governments from striking free trade deals and ‘threatens the integrity of the United Kingdom’.

Her resignation – and replacement by Amber Rudd – was welcomed by many officials in her department who reportedly found her difficult to work with.