Boris Johnson‘s plan to strike a comprehensive post-Brexit trade deal with the EU by the end of December has been slammed as ‘fantasy land’ by Brussels.

The UK and EU are currently in a ‘standstill’ transition period, lasting until the close of 2020, during which they are supposed to hammer out the terms of their future trading relationship.

But the coronavirus crisis has torpedoed talks, with negotiators unable to meet face to face to discuss the way forward.

The bloc did not believe the end of December deadline was achievable even before the deadly outbreak and there are now growing calls for the British government to agree to an extension of the transition period.

However, Downing Street remains absolutely adamant that it will not seek to delay the end of transition. 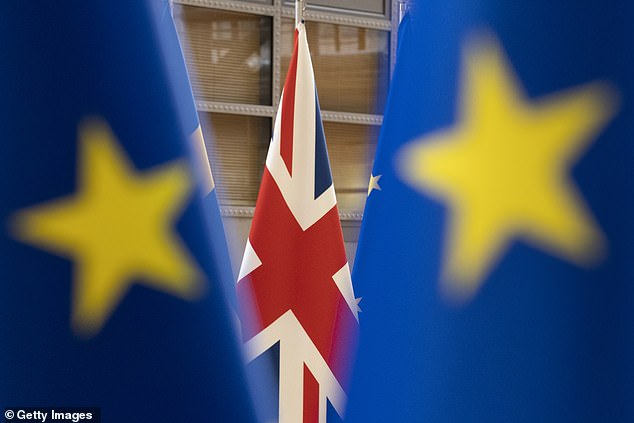 EU sources told The Guardian the December deadline was ‘already hopelessly optimistic’ and coronavirus meant it was now ‘like fantasy land’.

Many in the bloc believe the importance of trade talks with the UK will be relegated in the weeks ahead as the EU focuses on rebuilding the economies of its member states.

Despite the gloomy assessment in Brussels, the UK government is sticking to its guns.

A spokesman said: ‘We remain fully committed to the negotiations and as we have been clear, discussions with the commission are continuing, with the aim of reaching an agreement by the end of the year.

‘The transition period ends on 31 December 2020, as enshrined in EU law, which the Prime Minister has made clear he has no intention of changing.’

Chancellor Rishi Sunak echoed a similar sentiment yesterday, telling the daily coronavirus press conference: ‘We remain committed to the timeline of concluding those talks and negotiations.’

The Brexit divorce deal which saw the UK formally split from the bloc on January 31 contains a pressure valve mechanism which allows the transition period to be extended by one or two years – but only if both sides agree to the move.

Under the terms of the agreement any decision on extending transition must be taken by June this year. During the transition period the UK must abide by EU rules.

Sir Ed Davey, the acting leader of the Liberal Democrats, said: ‘It is disappointing that the government still refuses to pause trade talks with the EU and extend the transition period, despite the coronavirus crisis.

‘The Treasury is rightly trying to do what it can to support businesses through the coronavirus crisis, but allowing the country to fall into a no deal scenario in January could undo all of that work.’