Fake German heiress Anna Sorokin has been sentenced to four to 12 years in prison for swindling tens of thousands of dollars from banks and hotels that she used to bankroll her lavish New York lifestyle.

The 28-year-old con artist was sentenced in a Manhattan court on Thursday following her conviction last month on multiple counts of grand larceny and theft of services.

‘I apologize for the mistakes I made,’ Sorokin said just moment before her sentence was handed down.

Judge Diane Kiesel said during the sentencing that she was ‘stunned by the depth of the defendant’s deception’.

The U.S. Immigration and Customs Enforcement has said it will seek to deport Sorokin to Germany following her release from state custody because she overstayed her 2017 visa.

Sorokin has been in custody at Rikers Island since her October 2017 arrest and was facing 15 years in prison. 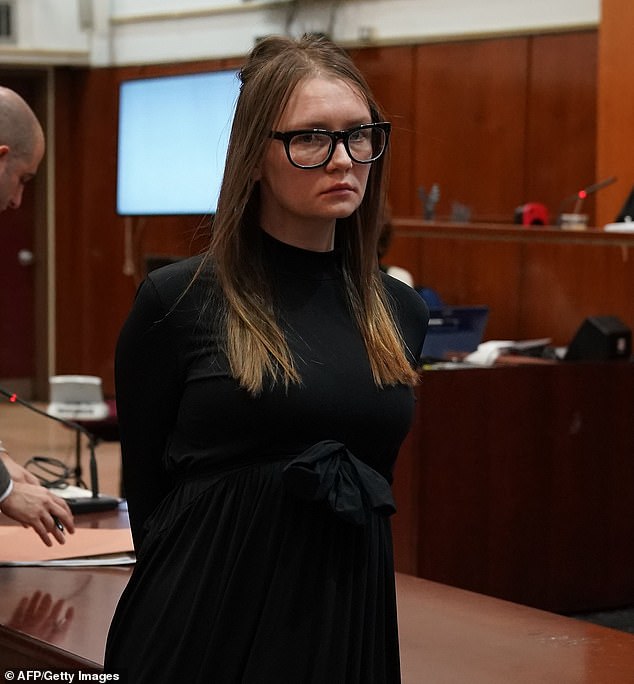 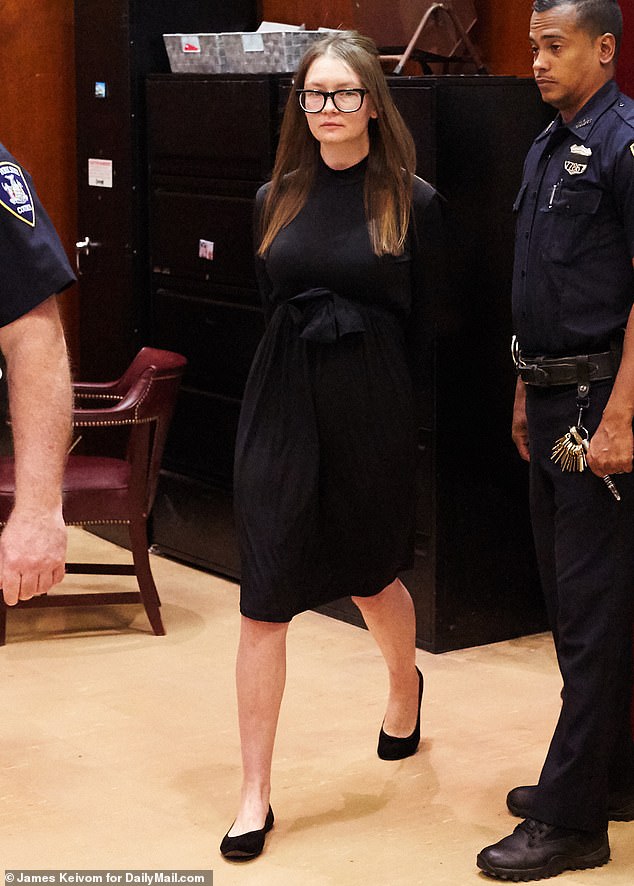 In addition to the prison sentence, Sorokin was ordered to pay nearly $199,000 in restitution and $24,000 in fines

Her grifting ruse between 2016 and 2017 included forging her identity as a wealthy German heiress known as Anna Delvey and falsifying bank records to further her scam.

Prosecutors accused her of stealing some $275,000, including a $35,400 bill for a private plane, as well as unpaid bills for her month-long stays in five-star New York hotel rooms and upscale restaurants.

Sorokin defrauded financial institutions and Manhattan’s social elite into believing she had an overseas fortune of about $67 million that could cover her jet-setting lifestyle, high-end clothing and lavish hotel stays.

As part of the scam, prosecutors say she peddled bogus bank statements in her quest for a $22 million loan to fund a private arts club. She ended up being denied that loan but persuaded one bank to lend her $100,000 that she failed to repay.

Sorokin was convicted of four counts of theft of services, three counts of grand larceny and one count of attempted grand larceny following a month-long trial that drew attention for her courtroom fashion.

Jurors acquitted her of two counts, including an allegation that she promised a friend an all-expenses paid trip to Morocco and then stuck her with the $62,000 bill.

She was also found not guilty of one of the most serious charges in the indictment: Attempting to steal more than $1 million from City National Bank.

Her defense attorney, Todd Spodek, argued that Sorokin had been ‘buying time’ and always planned to settle her six-figure debts.

He told jurors that Sorokin lacked criminal intent and was merely an ambitious businesswoman who got in over her head after being taken in by New York’s extravagance. He compared her at one point to Frank Sinatra, saying ‘they both created their own opportunities’ in New York.

‘There’s a little bit of Anna in all of us,’ Spodek said during the trial. ‘Anna had to fake it until she could make it.’

Prosecutors, however, maintained that Sorokin was simply a fraudster just trying to get a taste of the high life. 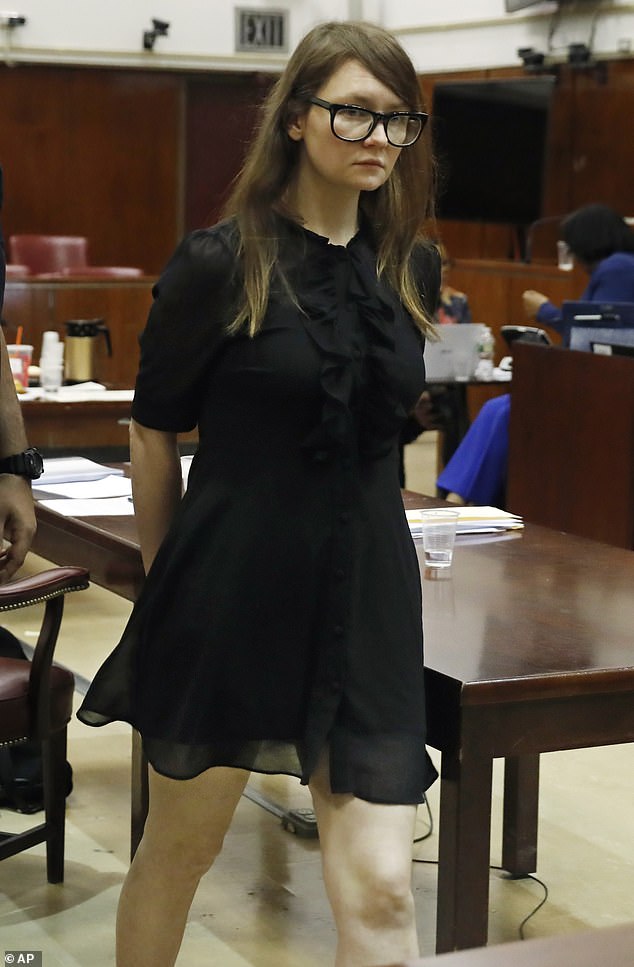 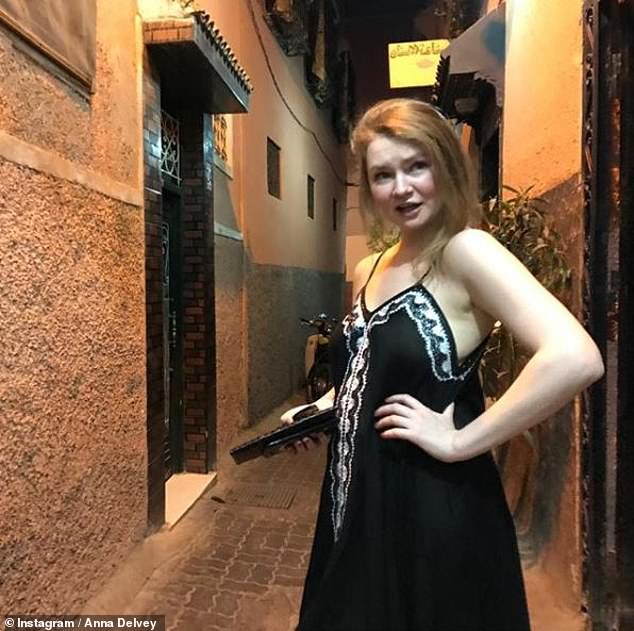 Sorokin defrauded financial institutions and Manhattan’s social elite into believing she had an overseas fortune of about $67 million that could cover her jet-setting lifestyle, high-end clothing and lavish hotel stays

Sorokin, who moved to Germany with her family in 2007 from her native Russia, had falsely claimed that her father was a diplomat or an oil baron.

In reality, her father worked as a truck driver and later as an executive at a transport company until it became insolvent in 2013. He then opened a business installing underfloor heating.

Sorokin’s father disowned her following the verdict last month and said that she had borrowed money from them too.

‘I really do hope my daughter finds what she is looking for, whatever it is,’ her father told DailyMail.com. ‘I do not have any influence on her life and what she does. It is down to her what she has done and it is something I am not comfortable to talk about.’

In an interview with Russian newspaper Komsomolskaya Prava, her father said: ‘Our daughter has never sent us any money. On the contrary, she was borrowing. Of course we are very concerned about her.

‘She has a selfish personality, we can’t do anything about it. We raised her well.’

Former high school classmates said Sorokin was an honors student and excelled in foreign languages, including English, German and French.

She had always dreamed of working in the world of fashion and magazines, her childhood friends recalled.

While most accounts of her early life said she left Germany to study at London’s prestigious Central St Martins College of Art, the school confirmed to DailyMail.com that she never attended despite being accepted.

Instead, Sorokin returned to Berlin and interned in the fashion department of a public relations firm.

She then relocated to Paris where she secured a coveted internship at the French fashion magazine Purple. It’s believed to be around this time that she changed her name from Sorokin to Delvey.

Acquaintances say Sorokin had spent several years playing the part of an art-obsessed German heiress across the world before she eventually came to New York in 2016 with a designer-clad wardrobe and the social connections she needed to make it. 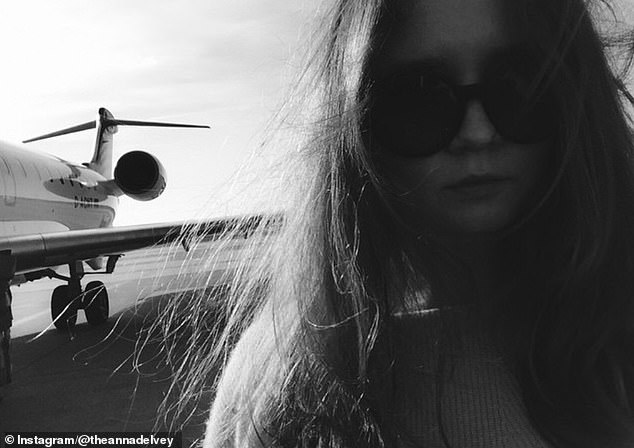 Sorokin defrauded financial institutions and Manhattan’s social elite into believing she had an overseas fortune of about $67 million that could cover her jet-setting lifestyle, high-end clothing and lavish hotel stays 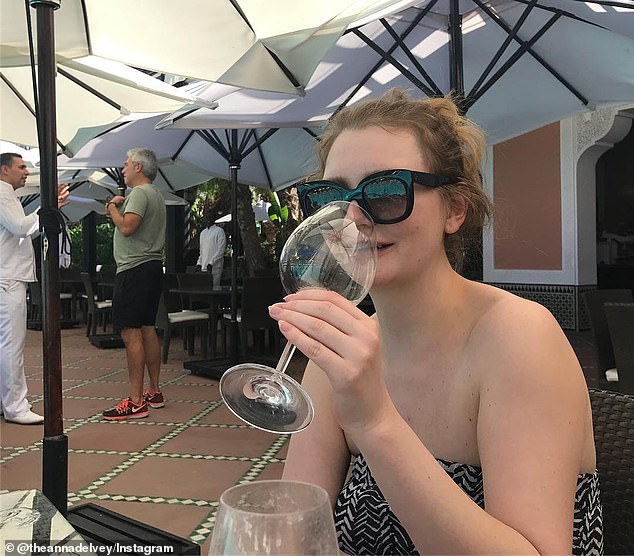 Sorokin gave varying accounts of where her wealth actually came from, according to her acquaintances. She told some that her father was a Russian oil billionaire. Others were under the impression that her parents were high up in the German solar energy business

She quickly went about proving herself to be an impossibly rich heiress who had plans to shake up New York’s art world with a multi-million private arts club that she thought about calling the Anna Delvey Foundation.

It would be an arts foundation that would include exhibitions, installations, pop-up shops, bars and restaurants. She compared the project to the SoHo house members’ club empire and said she planned to open branches in London, Los Angeles, Dubai and Hong Kong.

Sorokin managed to avoid suspicion among her wealthy friends in New York for months. 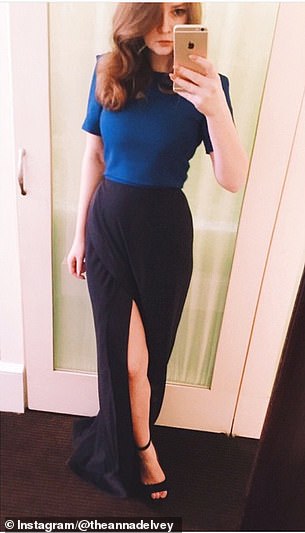 She rented a $400-a-night room for several months at Manhattan’s expensive 11 Howard hotel. Concierges at the hotel – including Neff Davis who she would later become friends with – were gobsmacked when Sorokin would pass out $100 tips to them and Uber drivers.

Sorokin would spend big in designer stores and would regularly host large dinners for celebrities, artists and CEOs at lavish restaurants.

She kept up the heiress ruse when she went looking for a $22 million loan to fund her new club in November 2016.

She said the loan would be secured by a letter of credit from UBS in Switzerland and showed what prosecutors say were bogus bank statements that purported to substantiate the $67 million in assets she claimed to have.

Spencer Garfield, a banker at the private equity fund Fortress, testified during her trial that Sorokin’s loan was rejected because she couldn’t produce proof of her fortune.

Despite a host of red flags, City National still agreed to lend Sorokin $100,000 in an overdraft that she promised to repay within days. 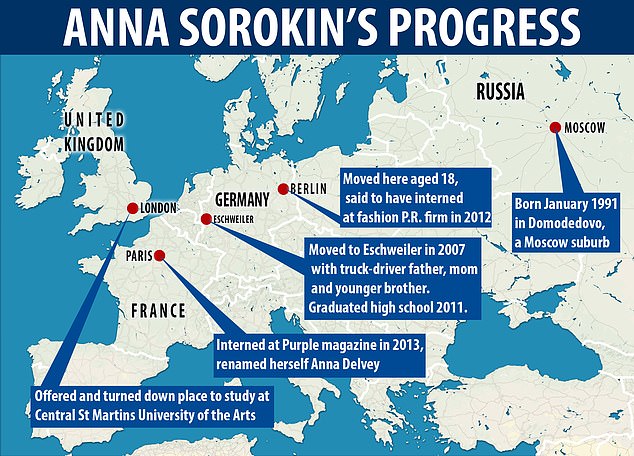 Sorokin sought this $100,000 after Fortress agreed to consider her loan request if she provided the funds for them to do due diligence, which is basically a background check of her financial records.

She gave the $100,000 to Fortress and they spent $45,000 of it carrying out their financial review. Sorokin then asked for the remaining $55,000 back, claiming she no longer needed their services.

HOW ANNA MANAGED TO SECURE MONEY:

Sorokin sought a $22 million loan from Fortress Investment Group in 2017 to fund her arts club after showing the private equity firm fake documents claiming she had a 60 million euro fortune.

They said they would consider it if she put up $100,000 for them to do due diligence, which is basically a background check of her financial records.

She managed to get a $100,000 from a different bank, City National, by convincing them to give her an overdraft that she promised to repay within days.

They spent $45,000 of it carrying out their financial review before Sorokin asked for $55,000 back, claiming she no longer needed their services.

She never repaid City National. Instead, she managed to spend the entire $55,000 within a month to fund her lavish lifestyle.

She also resorted to depositing bad checks and transferring funds out before they bounced – a process called check kiting.

Between April 7 and April 11, she deposited $160,000 in bad checks into her Citibank account and transferred $70,000 out before they bounced.

In August, she opened a different account with a different bank, Signature, deposited $15,000 in bad checks and withdrew $8,200 before they bounced.

She never repaid City National. Instead, she managed to spend the entire $55,000 within a month to fund her lavish lifestyle.

Between April 7 and April 11 in 2017, prosecutors said Sorokin deposited $160,000 in bad checks into her Citibank account and transferred $70,000 before the checks could bounce.

In August, prosecutors said Sorokin opened a bank account with Signature Bank and deposited $15,000 of bad checks into the account. She withdrew about $8,200 in cash before the checks were returned.

Sorokin ended up being kicked out of the 11 Howard after the hotel realized they didn’t have a credit card on file despite her racking up $30,000 in charges. When the hotel pressed her for payment, Sorokin told them a wire transfer was on the way.

Citibank eventually did send the wire transfer for the full $30,000 amount, which prosecutors said she paid for using money from bad checks.

But the hotel still locked Sorokin out of her hotel room in May 2017 while she was away on a trip to Nebraska because she couldn’t provide a working credit card.

Sorokin had chartered a private plane that cost $35,400 to and from the Berkshire Hathaway shareholders meeting in Omaha, Nebraska so she could try and meet billionaire Warren Buffet. She never paid the bill.

That same month, Sorokin embarked on a $62,000 extravagant trip to Morocco that she had promised two friends – Vanity Fair photo editor Rachel Deloache Williams and her personal trainer Kacy Duke.

They checked into a $7,000-a-night villa at the five star resort La Mamounia.

Williams would later tell authorities she was forced to put the bill for the hotel on her credit card and that Sorokin had promised to pay her back $70,000 when they returned to New York.

Months later when she hadn’t been paid back, Williams reported Sorokin to police and then the New York district attorney’s office.

Sorokin was not found guilty of grand larceny in relation to the $62,000 she was accused of stealing from Williams.

She was arrested in October 2017 for stealing $275,000 through multiple scams between November 2016 and August 2017. It emerged during the trial that Williams had helped set up her arrest by arranging a lunch for the pair in Los Angeles.

Almost as quickly as Sorokin was arrested, producers and screenwriters were clambering to secure the rights to her story.

There are two productions in the works: a Netflix series produced by Grey’s Anatomy creator Shonda Rhimes and a dueling HBO series by Lena Dunham.

During her trial, she was lambasted by the judge for seeming to care more about the productions than the trial.

She was also reduced to tears several times during the trial when the judge scolded her for delaying proceedings because she wasn’t happy with her outfit choices and treating the trial like a ‘fashion show’.

The one-time darling of the New York social scene and her attorney had enlisted the services of a stylist for her courtroom appearances.

Her stylist said that one of the factors weighing on outfit choices was that Sorokin’s courtroom style could affect how she is portrayed in the possible Netflix and HBO series about her.