After two decades of fast-paced city life in London, Dublin and New York, my wife Michaela and I decided it was time to put down roots and ease up a bit.

On our first viewing, we knew Fir Tree Farm in Suffolk was ideal for raising our daughters, Olivia, 14, Amelie, 13, and Ruby, 11, and so it was that five years ago we moved to the country.

Nestled in several acres with two ponds and woodland, the 17th-century farmhouse gave us the tranquillity we had longed for. 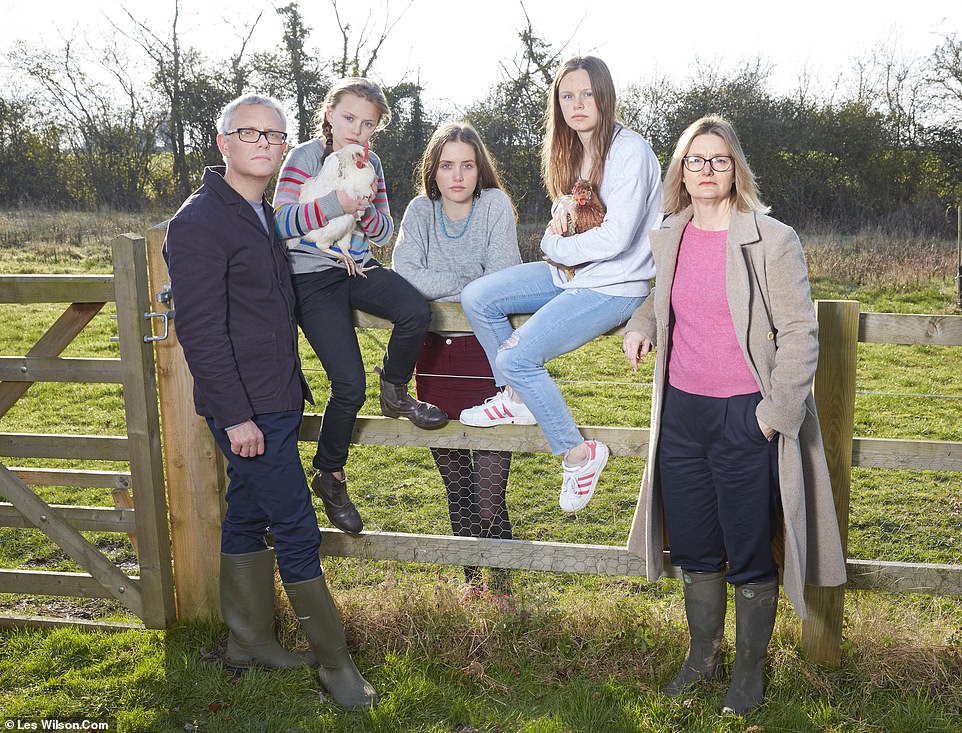 Dashed hopes: Paul and Michaela with their daughters, Olivia, 14, Amelie, 13, and Ruby, 11, at their beautiful rural retreat in Suffolk 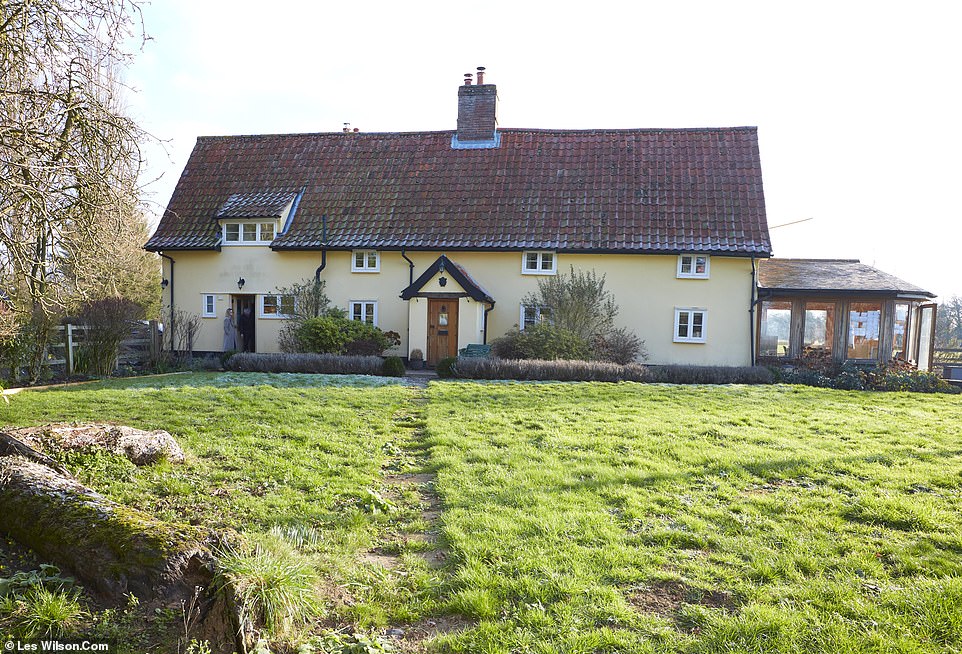 The Fields paid £685,000 for the house. It was valued at £900,000 before EDF made its plans public. A sale is unrealistic, estate agents told the family, unless they slash the price

It is so secluded that our only neighbours are acres of arable farmland, hares we can watch boxing and skies so dark that on clear nights you can see satellites hurtling through space like shooting stars.

We spent last year getting permission to extend the four-bedroom farmhouse and replace a dilapidated barn so we could provide accommodation for our parents, whose dependency on us has become more pressing.

Despite the family challenges many couples of our generation face, we knew we were very lucky. Fir Tree Farm and the lifestyle it gave us was like wearing a warm, cosy jumper on a crisp, frosty morning.

But then, last October, EDF Energy wrote to tell us it was launching a final consultation on plans to build two nuclear reactors at Sizewell, about eight miles from our home — and our property had been identified as possibly being affected. 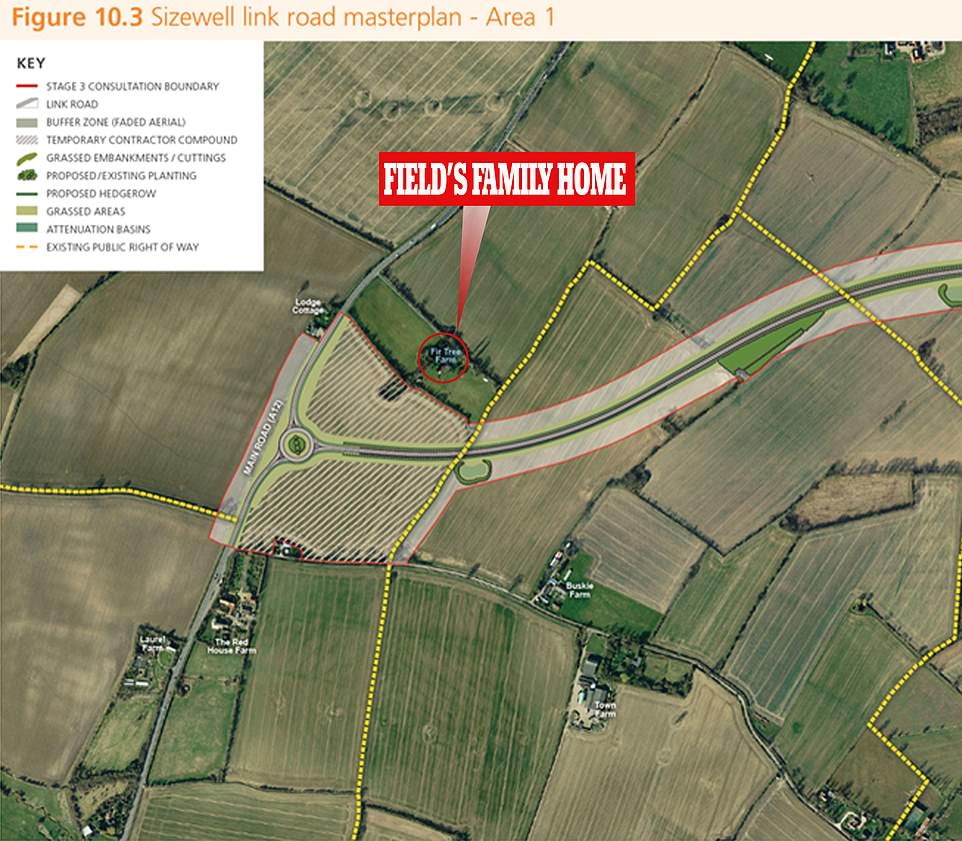 EDF wants to build a road from the A12 towards Sizewell. The road would go up against the boundary between the Fields’ property and neighbouring farmland

I called EDF and was told curtly that letters were being sent to hundreds of people.

No, they couldn’t say how the Sizewell C plans would affect us. Yes, we’ll be consulted in due course. No, there’s no date for when that will be.

After making some inquiries, someone with knowledge of the plans told me EDF wants to build a road from the A12 towards Sizewell. No other property would be impacted as much as ours because the road would go up against the boundary between us and neighbouring farmland. 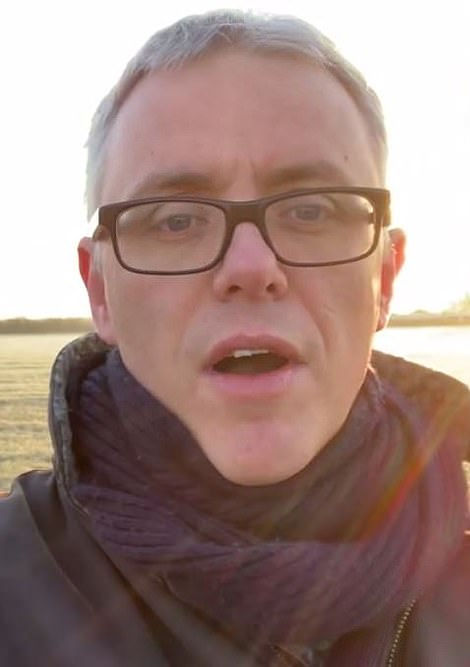 Paul (pictured) said: ‘Fir Tree Farm and the lifestyle it gave us was like wearing a warm, cosy jumper on a crisp, frosty morning’

Michaela and I felt sick, but we decided not to tell our children until we had a clearer picture.

After making half a dozen calls to EDF for information, I was invited to a meeting by Tom McGarry, head of stakeholder engagement for Sizewell C. ‘We don’t want your property,’ he said. ‘We’ll go round it.’

The first of my interactions with EDF set the tone for subsequent ones: paucity of detail and brutally cold communications. Worse was to come when EDF publicly released its proposals in January.

The only pollution is at harvest time, when our windowsills get a light covering of dust and we have to remember not to leave washing on the line when the combine harvester is out.

The proposals revealed that in this field, EDF would locate a construction compound for 300 workers and 175 trucks a day for two years while it builds its new road.

That would start with a roundabout in the field and run for five miles towards Sizewell, where building two nuclear reactors would take ten years.

EDF admits our home would suffer ‘significant adverse effects’ from noise. At the peak of construction, 1,500 HGVs and 6,000 other vehicles would thunder past each day.

The proposals also make clear that the proposed roundabout would be lit by 33ft-high lighting columns — so no more stargazing for us. Oh, and did I mention the air pollution forecasts?

Construction would start in 2021, encompassing the period when two of our daughters would be doing A-levels and GCSEs. 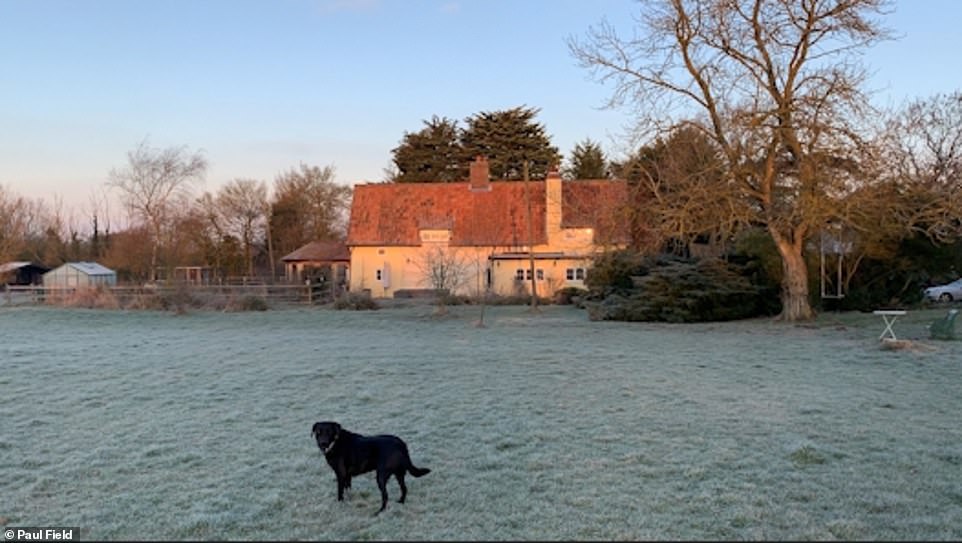 The property (pictured) is so secluded that the family’s only neighbours are acres of arable farmland, and on clear nights you can see satellites hurtling through space like shooting stars 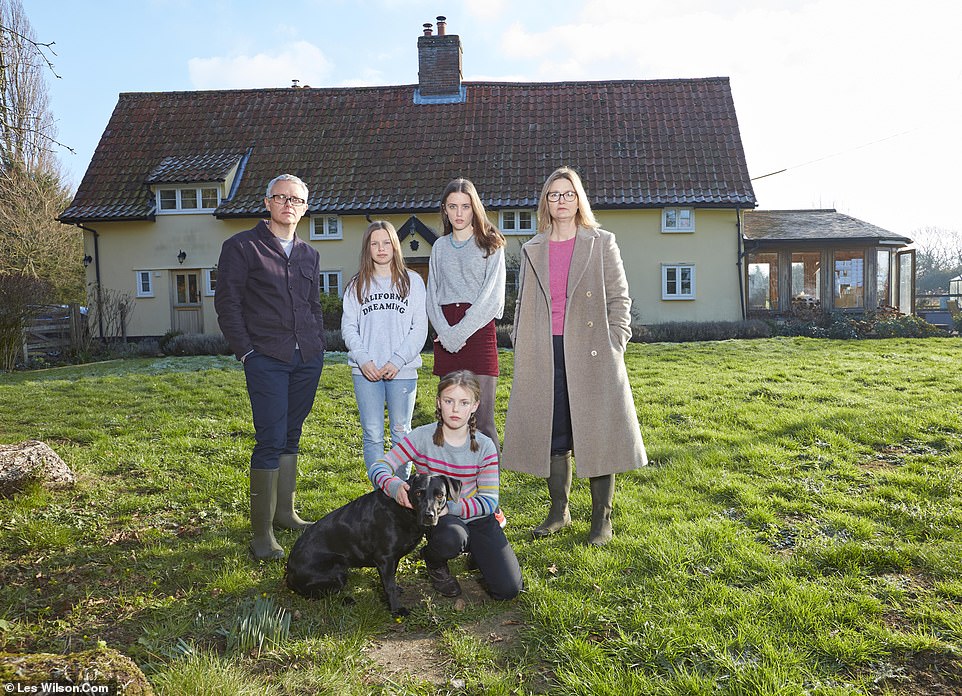 Last year, the family (pictured) got permission to extend the four-bedroom farmhouse and replace a dilapidated barn so they could provide accommodation for their parents 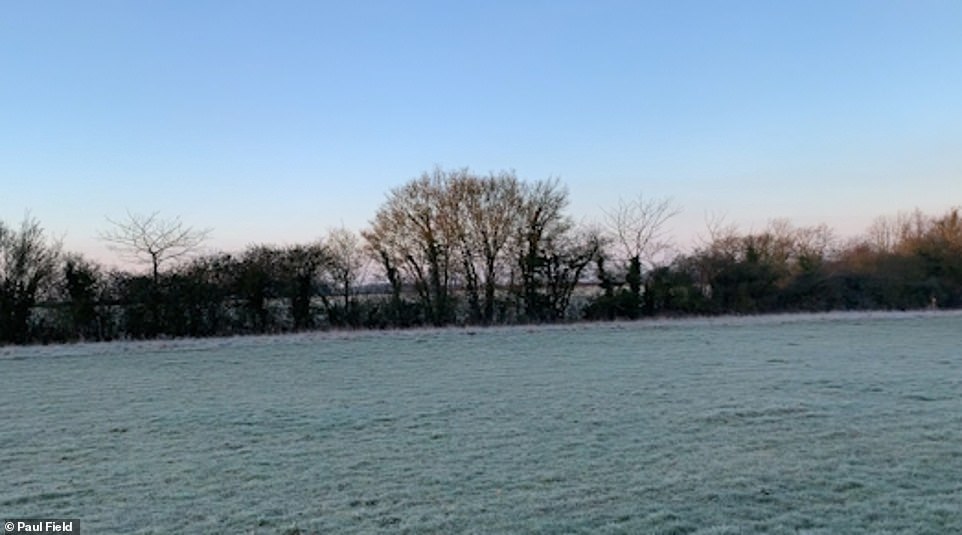 The only pollution is at harvest time, when the family’s windowsills get a light covering of dust and they have to remember not to leave washing on the line when the combine harvester is out

The level of disruption would make studying and working impossible. Both Michaela, a landscape artist, and I, formerly of the Mail and now a technology investor and adviser, work from home.

The plans we had made for our parents were wrecked as soon as EDF disclosed the road. Yet we still have a pressing need for more room.

The last thing Michaela and I want for our daughters is the upheaval of moving from a home we love, but we accepted there is no alternative.

Reluctantly, we wrote to EDF to ask them to buy us out. Given the £14 billion cost of Sizewell C, surely EDF could afford to be sympathetic to our situation?

How foolish we were to think EDF would be fair to us. We felt we were being extremely reasonable, given the huge sacrifice we were willing to make by moving.

When we got a response, five weeks later, EDF flatly refused to acquire the property.

Should we try to sell? We paid £685,000 for the house. It was valued at £900,000 before EDF made its plans public. A sale is unrealistic, estate agents told us, unless we slash the price. 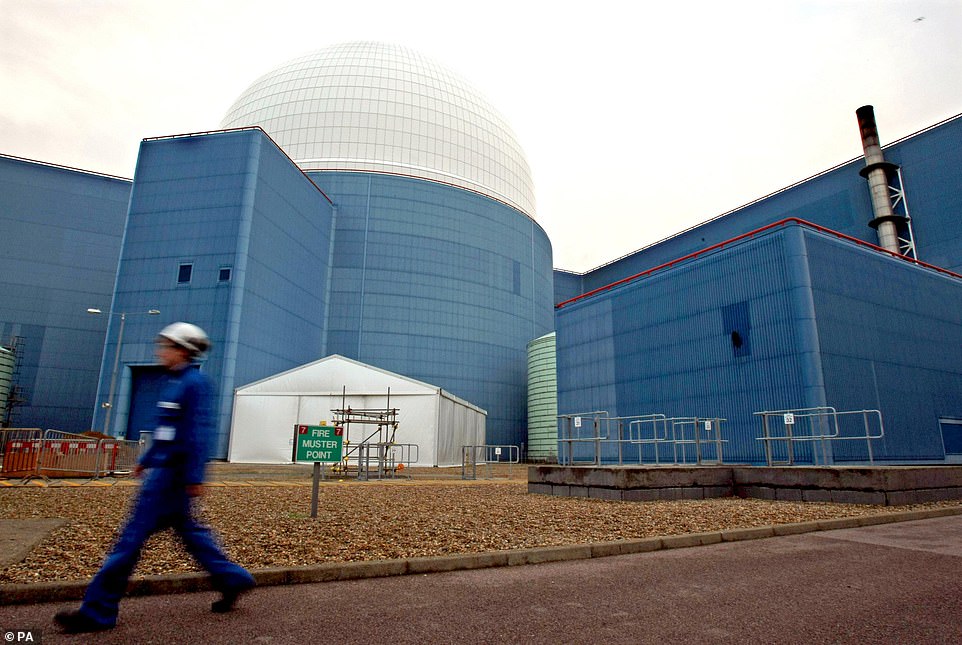 EDF Energy launched a final consultation on plans to build two nuclear reactors at Sizewell, about eight miles from the Fields’ home

We assumed there would be a legal remedy. Alas, no. The first opportunity to formally make a compensation claim for blight is when a proposed road has been approved, which, in the case of Sizewell C, is 2021 at the earliest. Until the road gets approved — and even then there could be a long and costly legal process to prove blight — we are stuck with a house worth less than we paid for it, and which fails to meet our needs.

The feeling of having our hands tied behind our back is bad enough, but this helplessness is compounded by EDF rubbing our nose in it.

At a public exhibition, I told Jim Crawford, the project developmet director, of my frustration that EDF had not engaged with me about our situation.

His PR man started laughing, as he waved his arms in the direction of the display boards in the room, saying: ‘What do you think this is? We are engaging with you!’

He smirked when I asked: ‘Why are you laughing? There’s nothing funny about the anxiety EDF is causing my family.’

This is not a story of Nimbyism, nor is it an emotive way to make a case against nuclear fuel. No, after months of trying to appeal to EDF to treat us fairly, this is about how big business can run roughshod over ordinary people like a bulldozer crushing farmland to make way for a new road.

We’ve been struck by how a single event can make you feel as though the walls are falling in around you, and you’re powerless to do anything to stop it.

Mr Crawford says: ‘We are asking the local community what they think of plans for Sizewell C. We have met with Mr Field and other people who could potentially be affected by Sizewell C proposals, with the most recent meeting held last week. We will take on board the feedback we receive and provide appropriate mitigation.’

Meet the tiny Welsh island where 20,000 saints are believed to be buried
The world's best carnivals, from Rio de Janeiro to New Orleans
Whatever happened to Jackie O's first husband? The DJ career of 'Ugly' Phil O'Neil revealed
Audrina Patridge settles divorce with Corey Bohan... as he blocks daughter from The Hills reboot
PIERS MORGAN: Why Michelle Obama is Trump’s worst nightmare
WAGs of Wimbledon! Meet the proud plus-ones who will join Kim Murray in the stands at SW19
Woman, 40, snares family friend who abused her age of seven by hiding a secret recorder in her bra
'It was coming to him': What gang of teenagers 'shouted after stabbing married lawyer'