A mother has hit out at the hospital where her husband died aged 44 after being able to hold his newborn son just one time.

Terry Hickson, 44, from Liverpool, died after medics made a string of blunders after he was rushed to hospital with excruciating stomach pain.

Widow Louise Hickson, 32, who gave birth to son Xander by cesarean section, has been in a five year battle with with Arrowe Park Hospital in Merseyside.

And now, after receiving £140,000 damages she has said ‘our lives have been shattered by the hospital’s fatal mistake’. 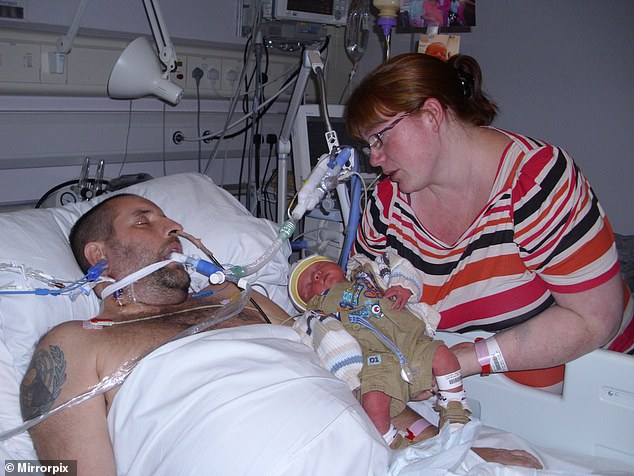 Terry Hickson (pictured), 44, from Liverpool, got to hold his newborn son just once as he lay dying in hospital

Mrs Hickson described the moment she took their son to meet his father for the first time.

She told the Mirror: ‘They woke Terry from sedation and he smiled when I walked in holding the baby.

‘But as I sat next to him, he grabbed my arm and shouted at me to get out.’

Doctors told Ms Hickson that her husband was heavily sedated and was not aware of what he was saying.

She said: ‘That’s the last thing my husband ever said to me. It was traumatising.’

Two days later, Mrs Hickson received a call saying her husband had gone into cardiac arrest and had died.

The mother-of-four says she ‘has not felt pain like it’ and was screaming and crying when she heard the news. 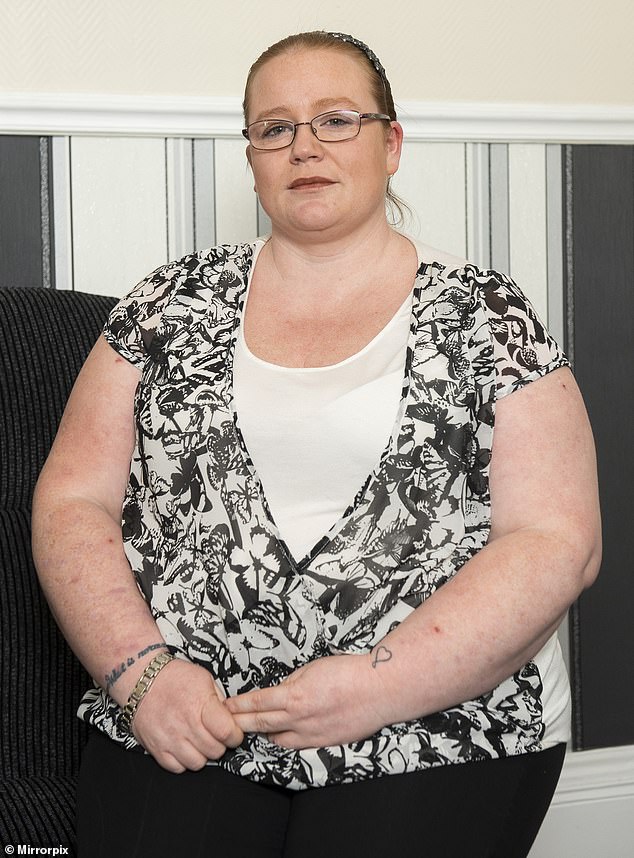 Widow Louise Hickson, 32, who gave birth to son Xander by cesarean just three days before her husband’s death, has been in a five year battle with the hospital

The family has been awarded £140,000 damages after NHS bosses finally admitted to their errors.

Mr Hickson was rushed to hospital in 2012 with suspected kidney stones which turned out to be an incarcerated hernia, causing his lugs to fill with fluid after it burst through his stomach and bowel.

In the following days medics did not identify Mr Hickson as being at risk of a blood clot as he spent 13 days in hospital after his operation.

The father was not prescribed blood thinning and he was eventually killed by a huge fatal clot that travelled up his leg to his heart.

Mrs Hickson said: ‘The hospital made mistake after mistake and their ­catalogue of errors led to the death of my husband’.

Since her husband’s death, the mother has suffered depression and painful fibromyalgia which was triggered by the horrific trauma.

But she said she fought the hospital because she wanted an apology over her husband’s death and she says can finally move on.

A spokesperson for Wirral University of Teaching Hospital NHS Foundation Trust told the Mirror: ‘We would like to express our sincere condolences to Mr ­Hickson’s family. We are extremely sorry for their loss.

‘Regrettably errors were made back in 2012 and our care fell below our usual high standards.’

'Don't come to Gatwick TOMORROW': Airport drone chaos spreads into third day
Toddler and father have an adorable 'conversation' watching television together
MPs brand NHS cancer screening programmes 'unfit for purpose'
Man is stabbed while crossing road outside Clapham Common tube station
Author Kathryn Pearson swears she can literally feel other people’s emotions
Chloe Green seen for first time since Sir Philip Green's #MeToo scandal
Emaciated 'living mummy' was NOT mauled by a bear and held in its den
Queen heads out on a shoot with friends on the Sandringham estate