Fathers 4 Justice have today defended using an image of Caroline Flack in tweets about domestic abuse.

Founder Matt O’Connor has hit back at ‘hypocritical’ and ‘disgraceful’ abuse aimed at his group, in the wake of the star’s tragic death last weekend.

The campaign had tweeted a picture of Miss Flack holding a sign that read: ‘This is what a domestic abuser looks like’, alongside the hashtag ‘AbuseHasNoGender’.

Mr Burton asked the CPS not to proceed with charging her and the much loved TV star had pleaded not guilty to assault by beating.

It has since been revealed how the former Love Island presenter later messaged singer Kerry Katona asking for help.

In a private Instagram message, posted on Instagram by Katona, Miss Flack wrote: ‘How did you deal with fathers for justice? They are horrible x’.

The group has received a backlash after Miss Flack took her own life, but founder and leader Mr O’Connor has now defended the images. 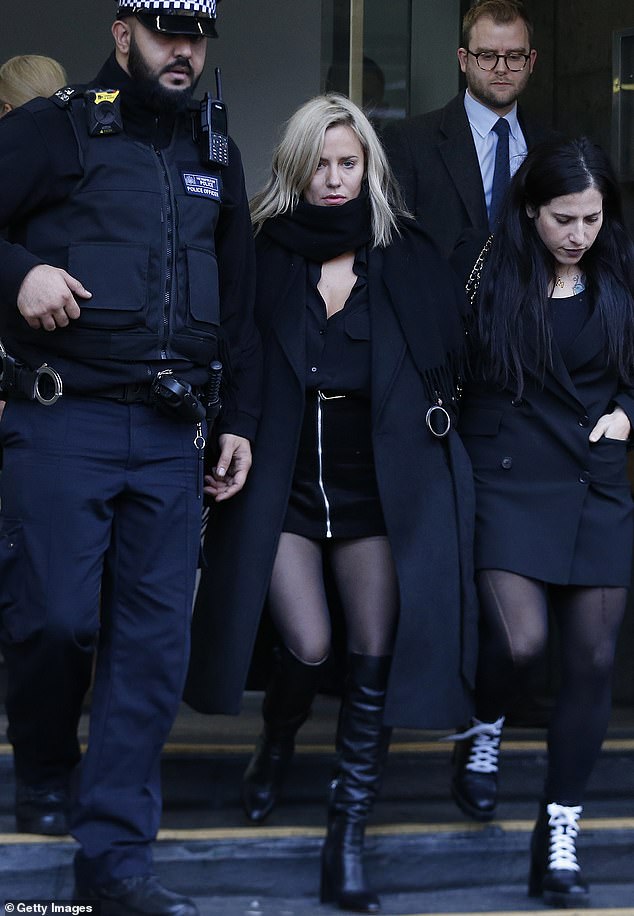 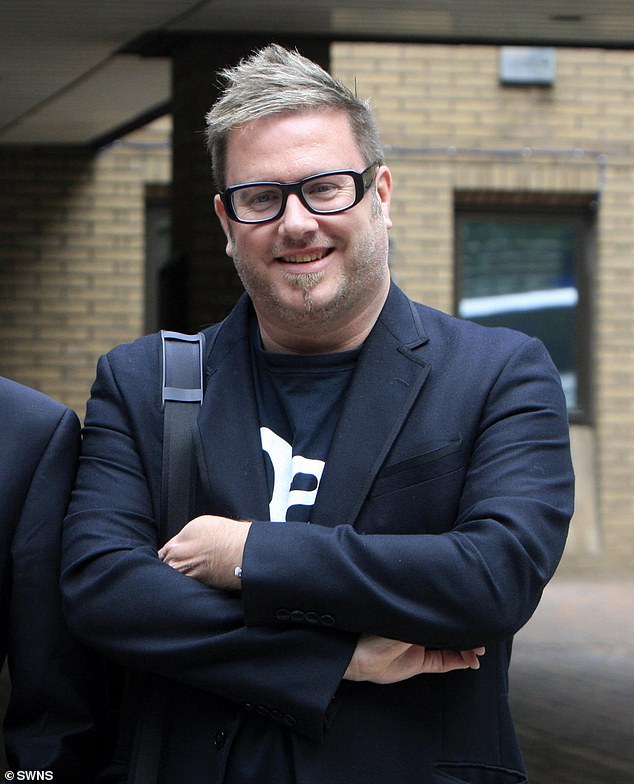 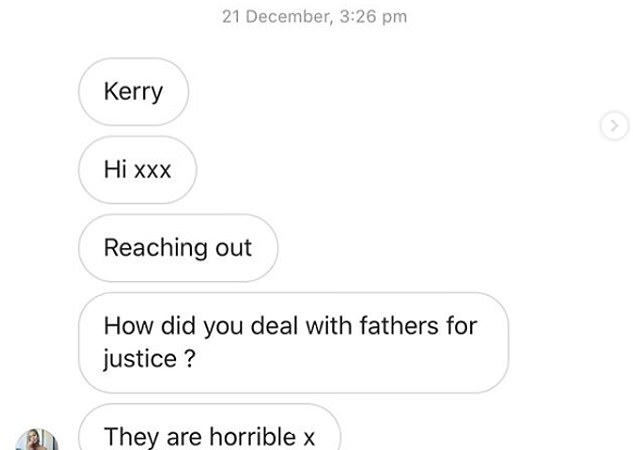 Miss Flack, who was found dead at her London home aged 40, messaged Katona, 39, on Instagram a week after she was charged with assaulting her boyfriend Lewis Burton, 27

Mr O’Connor said their campaign only followed a post by Miss Flack’s ex-fiancé, Andrew Brady, who used the same hashtag when he uploaded a non-disclosure agreement to social media that week.

Mr O’Connor said F4J were justified because of the CPS’s intended prosecution.

He said: ‘Caroline Flack’s premature death is an absolute tragedy and our hearts and sincerest sympathies go out to her family and friends at this incredibly distressing time.

‘It is deeply regrettable – though unsurprising – that some people have chosen to exploit Caroline’s death in a poisonous, irresponsible attempt to scapegoat others and undermine the vital work Fathers4Justice (F4J) do on behalf of Britain’s men and fathers.

‘Since Caroline’s passing, our mostly female team have been subject to a vile hate campaign involving abuse and threats, including death threats.

‘Last year, supporters of one of those involved in inciting people to make threats, issued a bomb threat against F4J.

‘All credible threats have been, and will continue to be, reported to the police.

‘It goes without saying that these horrendous attacks do not represent the spirit of kindness advocated by Caroline.’ 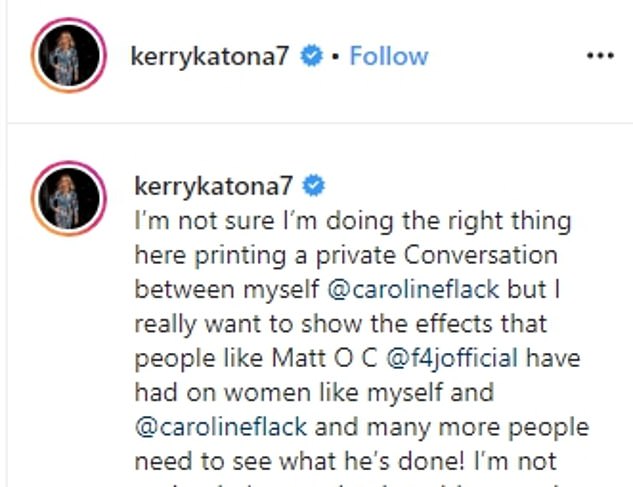 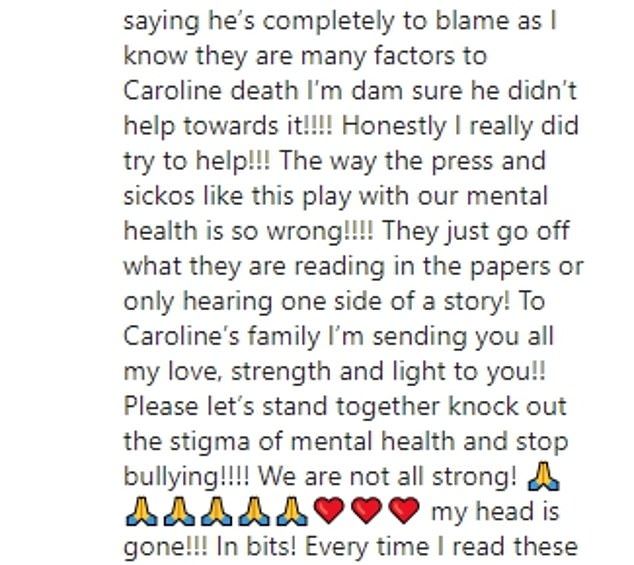 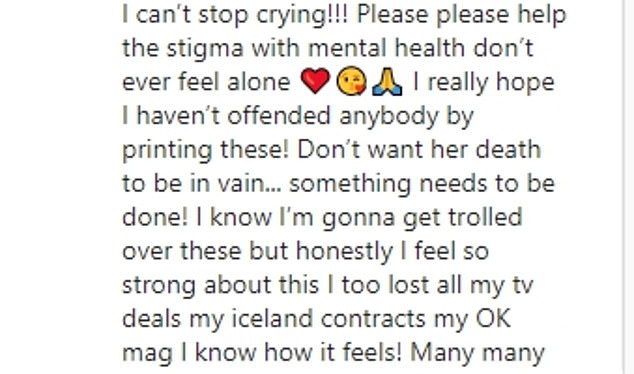 Katona wrote a lengthy post on social media this morning, apologising if she had offended anyone

F4J said the tweet was part of a campaign to raise awareness of domestic violence against men.

He said the group’s ten posts over a three-month period and their content did not amount to ‘trolling’, and claims female staff have been sent abuse and death threats in the wake of Miss Flack’s death.

Mr O’Connor added: ‘Our involvement with Caroline Flack’s arrest began after her ex-fiancee Andrew Brady, shared an Instagram picture of the Non-Disclosure Agreement he signed regarding Caroline, using the F4J hashtag #AbuseHasNoGender.

‘We then posted a test advert on social media in December addressing the issue so we could gauge the response.

‘We again used our hashtag #AbuseHasNoGender.

‘The purpose of the ad was to demonstrate that women, as well as men, can be domestic abusers.

‘The test advert was based on detailed accounts in the media of the incident, details of the CPS prosecution, Ms Flack’s reported claim that she told police ‘I did it’, the fact Ms Flack was charged with ‘assault by beating’ and appeared on bail at Highbury Corner Magistrates Court. She was due on trial on 4 March 2020. 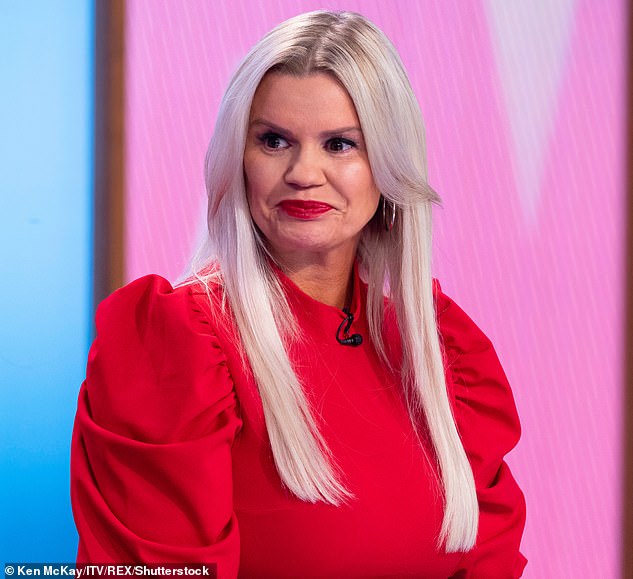 ‘The advert was then submitted by our media agency to the Advertising Standards Authority who said it may breach the CAP code. As a result, the advert was never used.

‘Addressing claims by certain individuals that we ‘trolled’ Caroline Flack, we believe we posted a maximum of 10 posts over a three-month period on each of our social media channels.

‘At no time has F4J breached social media rules or guidelines, nor have any sanctions been taken against us.

‘Our position has not changed since 2001. It is hypocritical and quite disgraceful to lay any blame at the door of an organisation that has championed the vulnerable for nearly 20 years.

‘Moving forward, we have long argued for better mental health provision for those using the judicial system, including the family courts, and we call for the inquest into Caroline’s death to establish what lessons can be learned from this appalling tragedy.’

If you have been affected by this story, please call the Samaritans 24/7 on 116 123 or visit www.samaritans.org