COPENHAGEN, Denmark (AP) – A ferry stranded in the Baltic Sea for several hours with about 300 people on board was on the move again on Tuesday following a malfunction that sent smoke pouring from the engine room, authorities said.

The Regina Seaways was headed toward its original destination in Lithuania after the crew restarted the main engine, according to the country’s defense ministry.

The ferry, operated by Copenhagen-based DFDS Seaways, was in international waters off Kalingrad, Russia’s Baltic Sea exclave between Poland and Lithuania when the engine stopped working. The Regina was paralyzed for about six hours because of the breakdown.

Passengers had assembled at muster stations in preparation for a possible evacuation, and rescue ships were scrambled as a precaution. But an evacuation order never came, and there were no reports of injuries.

“We are talking about a malfunction in the engine room that caused a lot of smoke,” DFDS spokesman Gert Jakobsen said. 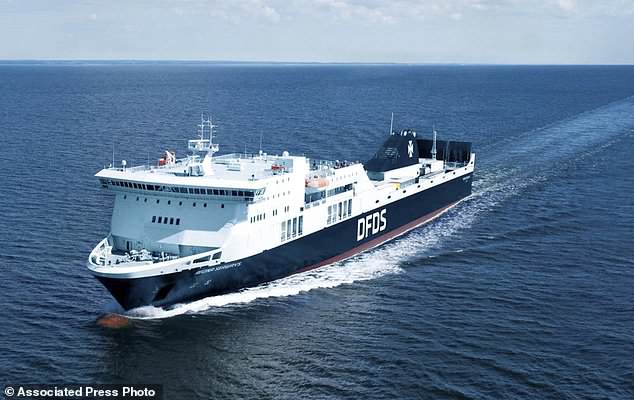 The undated photo provided in the photo library on the website of DFDS shows the vessel Regina Seaways. The ferry with 294 passengers on board was stranded in the Baltic Sea on Tuesday, Oct. 2, 2018 after an engine breakdown. The malfunction aboard the Regina Seaways produced smoke, which triggered the ship’s fire extinguishing system in the engine room, DFDS said in a statement. (DFDS A/S via AP)

The ferry, which also had cars and trucks on board, was traveling from Kiel, Germany, to Klaipeda, Lithuania’s port city north of Kaliningrad. The crossing normally takes about 20 hours.

“On these kinds of crossings we have people from Germany, the Baltic countries and Russia. We cannot say now who was on board,” Jakobsen said.

The ship was about 85 kilometers (50 miles) from Klaipeda when it became stranded, said Vaidas Klumbys, another DFDS spokesman.

He said that on Tuesday afternoon “we received the information from the ship that it was undergoing vibrations and smoke rising from the engines.”

Lithuanian navy helicopters and vessels were dispatched to the site in case an evacuation was necessary. The regional news agency, Baltic News Services, quoted Klumbys as saying “the weather conditions are not good.”

Forecasts for the southeastern part of the Baltic Sea said there were gale force winds, rain showers, poor visibility and risk of thunderstorms in the region.

The Regina Seaways was built in 2010 and can carry up to 500 passengers.

David Keyton in Stockholm, Liudas Dapkus in Vilnius, Lithuania, and Jim Heintz in Moscow, contributed to this report.

A previous version of this story was corrected to show that Kiel is in Germany, not Lithuania.