A crackle of musket fire rings out across a valley. It is followed by the detonation of a massive artillery piece, while, in the near distance, a mighty Sherman tank roars into life.

Meanwhile, two Vikings have an argument that ends up in a vicious sword fight, watched by a pair of Elizabethan women and a Tommy from World War I smoking a casual roll-up.

Below ground level, a squad of paratroopers hold their breath as they get ready to emerge from their squalid trench — ahead of them lie the deadliest foes in the German Wehrmacht, who will doubtless fight to the death. 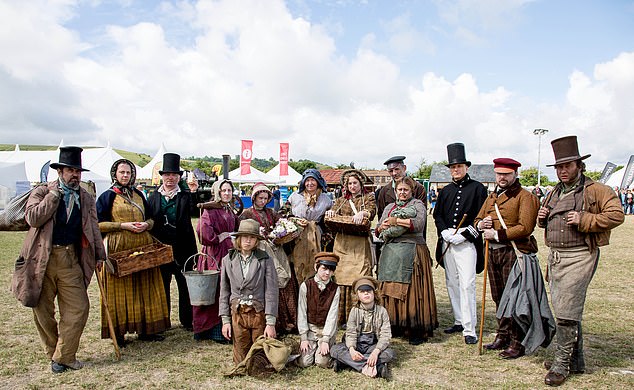 What the Dickens! A constable keeps order as Victorian re-enactors show their wares at the Chalke Valley History Festival in Salisbury, Wiltshire

Supporting them are a group of eight-year-old children, clutching water bottles.

You may think all this describes some madcap film, but you’d be wrong. Welcome to the Chalke Valley History Festival, a glorious celebration of our past, which is sponsored by the Daily Mail.

Living in a land with a past as rich and varied as Britain, it is too easy to take history for granted. It is all around us, in our buildings and institutions, many of which have stood for hundreds of years.

Even some of our laws are nearly 800 years old, and, of course, the monarchy stretches back for at least a millennium and a half.

But, despite being surrounded by such a wealth of history, how many of us really know our island story, or the stories of other lands?

Most may have a good knowledge of certain periods or events, such as the Tudors or World War I, but, when it comes to the full narrative sweep of British history, most of us are — embarrassingly enough — pretty ignorant. 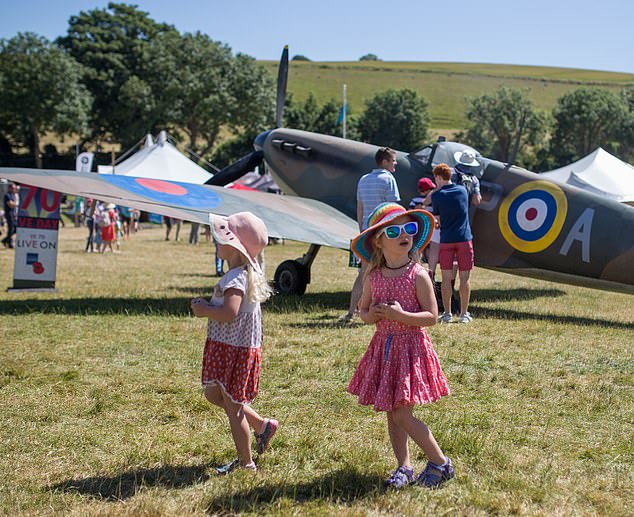 Youngsters enjoy the sights next to an iconic Spitfire. There’s an extraordinary range of topics and activities available at the festival — many for children

The annual Chalke Valley History Festival is a fantastic opportunity to fill in all these gaps in your historical knowledge. Now in its ninth year, the festival, held in beautiful Wiltshire downland a few miles west of Salisbury, is Europe’s largest festival dedicated to history.

And this year promises to be the biggest and best yet, with a dazzling range of topics and speakers spread over the last week in June.

Among many others giving talks, there’s former member of the French Resistance John Jammes, recalling his terrifying wartime exploits, and TV historian Dan Snow, looking at the Vikings. 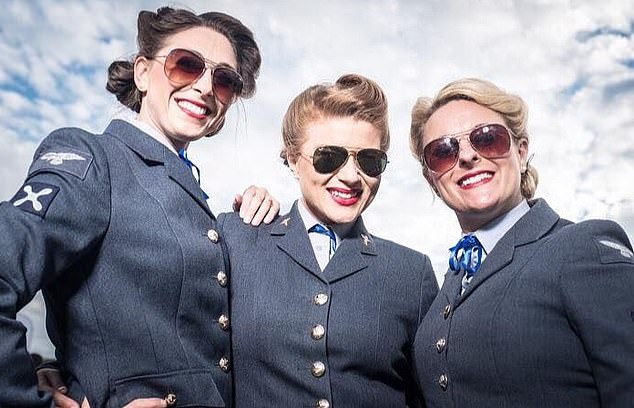 Girls in blue: The D-Day Darlings singing trio will evoke World War II. The annual festival is a fantastic opportunity to fill in all these gaps in a person’s historical knowledge

Bestselling crime novelist Minette Walters will discuss the Black Death, while Steven Isenberg, a friend of Robert Kennedy, who worked for him, is speaking of the Kennedy era — and of his horror when he heard that Bobby had been assassinated, like his brother John F. Kennedy.

British-Indian television presenter Anita Anand will tackle the stain of the Amritsar Massacre of 1919, when a British general ordered his troops to fire into a crowd of Indians gathered in Amritsar, killing hundreds. Biographer Andrew Roberts will talk about his monumental book on Churchill.

Alternatively, visitors can turn to satirist and Private Eye editor Ian Hislop, who will be examining the history of dissent, while those of a more political persuasion might opt for Jacob Rees-Mogg’s views on Victorian titans, or former Labour minister and SDP co-founder Lord Owen on ‘The Road To Donald Trump — Power, Populism, Narcissism’.

Nothing tells the story of Britain more forcefully than our great houses, and the home of the Duke of Northumberland, Alnwick Castle, is no exception.

The present duke, Ralph Northumberland, talks at the festival of his family’s 1,000-year role in Britain’s story, taking us from the Norman Conquest to the two World Wars and beyond. There’s also a starring role in Shakespeare — Harry Hotspur, the Duke’s ancestor, is one of the Bard’s best-known characters in Henry IV, Part 1, a rebel lord killed in battle.

More recently, Alnwick Castle (pictured left) has been the scene of very different battles, as the home of Hogwarts school in the Harry Potter films. 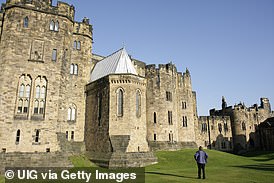 Certainly, there’s an extraordinary range of topics and activities available — many for children. And, this year, there is an extra dimension to help us understand how the UK reached this point. The festival is launching a major five-year project called Britain: The Thread Of History.

It will comprise a series of 35 talks that aim to thread together many of the different strands of Britain’s story to form a compelling portrait of the country since 1603.

These talks will be permanently available as podcasts and will also form a book to be published in 2023 and donated free to every UK secondary school.

‘It has never been more relevant to understand the rich and varied history of the British Isles,’ says historian James Holland, chair of the festival. ‘Why are we the nation we are? And why do we have the cultural and ethnic mix we do? The answers lie in our rich and varied past.’

This year, The Thread Of History talks — all delivered by eminent historians — will take us from the reign of James I, moving on to Charles I, through Cromwell and the Civil War, to The Restoration, taking us up to 1714.

Next year, the talks will focus on the subsequent ‘tranche’ of our past — and so it will continue for five years, to provide a fantastic resource of ‘joined-up’ history for adults and pupils to get to grips on what made Britain the country it is.

One of the major influences on our recent history is, of course, World War II, and, as this year marks the 75th anniversary of the D-Day Landings, the festival is ensuring that this pivotal event is properly marked.

We are fortunate that the very first event will feature three D-Day veterans, including Laurie Weeden, a former glider pilot, Richard Llewellyn, who served aboard the cruiser HMS Ajax, and Joe Cattini, of the Royal Artillery.

Being at Chalke Valley to hear their memories will be a privilege, and they are not the only veterans attending. One of the most engaging will be Ken Tout, a veteran of the Normandy campaign, who served as a gunner in a Sherman tank. 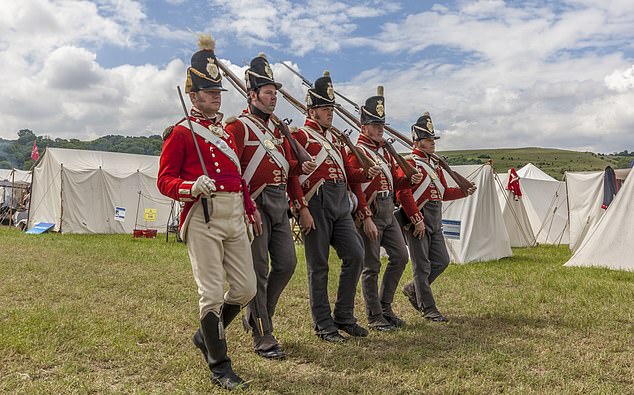 Ready to face Napoleon at Waterloo: Actors prepare for battle during the festival. Living in a land with a past as rich and varied as Britain, it is too easy to take history for granted. It is all around us, in our buildings and institutions, many of which have stood for hundreds of years

In August 1944, Ken was involved in a famous armoured action, when SS panzer ace Michael Wittmann — who destroyed a staggering 139 Allied tanks — was finally killed.

Ken’s story of life in a Sherman is the real deal.

Yet the festival is not just a series of talks. Adults and children can get stuck into history — literally, where the Trench Experience, modelled on a World War II trench from Normandy, is concerned.

Lien de Jong last saw her parents when she was collected at the door of their home in Holland by a stranger working for the resistance, and taken to a family far away to be hidden from the Nazis in August 1942.

Her Jewish parents had made the heart-breaking decision to save her in the only way they could — by sending her away.

The yellow star identifying Lien as a Jew was unpicked from her clothes and, until the end of the German occupation, she was spirited away into an underground network and kept safe. The only keepsake she had from her parents — who died in the Holocaust — was a note that implored: ‘May you, with the best will and wisdom, look after her.’

Lien will discuss her struggle to survive Nazi persecution and the powerful love — and challenges — of foster families, with Bart van Es, a grandson of her foster parents, who turned her story into a book, The Cut Out Girl, which recently won the prestigious Costa Prize.

In Living History, you can get a feeling for the sights, sounds — and smells — of what it was like.

You can see what it took to be a member of the Special Operations Executive (SOE), the organisation that sent agents into occupied Europe to help the resistance create havoc against the Nazis.

This year, the team from the highly successful BBC documentary series Secret Agent Selection: WW2 will be offering a selection course under the leadership of historian and former Army officer Adrian Weale, in which you can try unarmed combat, an assault course and even handle weaponry.

A major element of the festival is Live History Live, in which historical re-enactors present their knowledge and skills. Accompanied by such historians as Alex Langlands and Dan Jones, you will be able to watch — and taste — Tudor and Saxon cookery and see how an aristocratic lady in Stuart times would have dressed for the day in all her court finery.

The mechanically minded will enjoy displays of threshing and baling during World War II and learning how vast timbers were used for building. To wash it down, a history of brewing will be popular.

Sword School will offer people the chance to clash blades in the Middle Ages, with an introduction to the art of fighting with swords, for both adults and children.

For a quieter approach, there is the Children’s Creative History Tent, providing arts and craft- type activities for those aged between six and 12. Sessions include making Roman pottery, swords, Victorian decoupage boxes and World War II helmets.

The festival’s three-day schools programme offers the chance for pupils to live history in exciting new ways — learning from the very best communicators and historians in the business.

To date, more than 10,000 pupils from a cross-section of schools nationwide have attended — and numbers will only rise. This year, topics range from the Age Of Chivalry to Churchill and Roosevelt, and from Pompeii to Appeasing Hitler, plus plenty more. 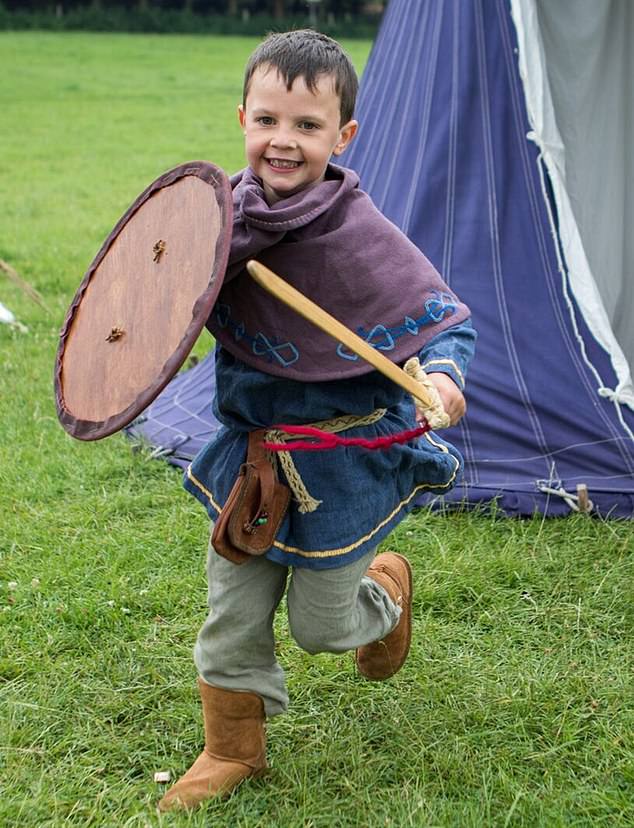 Living in the past: Youngsters will really relish going back in time. Despite being surrounded by such a wealth of history, how many of us really know our island story, or the stories of other lands?

But, as well as tackling weighty topics such as Russian interference in foreign elections and regicide, the festival will have a lighter side.

Fans of panel shows will love Histrionics — with broadcaster Natalie Haynes, actor and author Charlie Higson and actor/comedians Harry Enfield and John Sessions — where teams delve into the past to find the outrageous and obscure.

Higson will also be giving a talk on the young Winston Churchill, while Haynes — a star of Radio 4 — will use her comic talents to tell the story of women in the Trojan War. 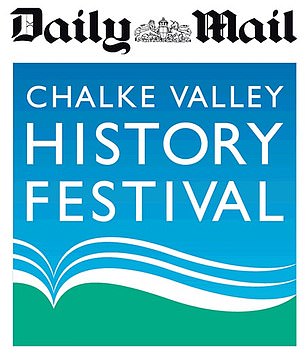 Despite these star names, one attraction is bigger than all: a giant replica of a Hawker Typhoon that will be four times the original size.

This will be the largest model World War II fighter ever built and is being constructed by defence firm QinetiQ and the Ministry of Defence at Boscombe Down.

The giant model shows the vital role played in the latter part of the war by the rocket-firing Typhoon, which it is often overshadowed by the iconic Spitfire and Hurricane.

Whether you can come for the whole week or the afternoon, there is no doubt the festival is a great opportunity to immerse yourself in Britain’s past and learn a lot.

It also helps that there is a fantastic beer tent, which is perhaps the best place for some serious historical analysis.