An experienced firefighter has told of his constant fear for his crew’s safety on Bonfire Night after experiencing a “warzone”.

Last year there were a number of incidents involving disorder and fire-starting, one of which resulted in serious injury to a police officer in Edinburgh, as well as lots of property damage.

Watch manager Glynn McAffer said his crew was among those to be targeted with aggression.

He added: “It was like a war zone when we arrived, and my first thought was: ‘I’m not going in there.’

“I had no other choice but to call our operations control and inform them that we required a police presence to ensure the safety of our firefighters.” 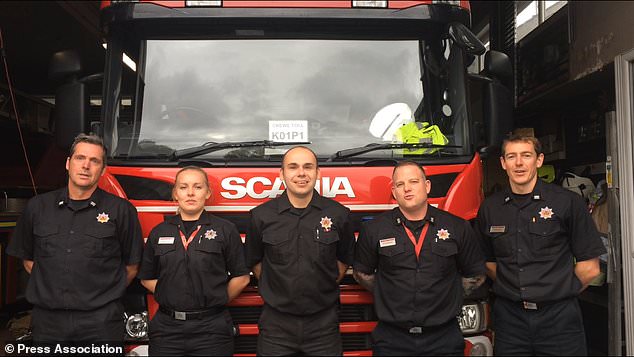 He added: “It’s difficult as you are there to do a job and protect the community but there is of course a frustration as you have come to hose down what they call fun.

“I have to think of the personal safety of my crew and – if there are too many of them – we’ll just leave.

“For newly qualified firefighters it can be quite a daunting experience – my job is to protect them.”

Crews responded to around 330 bonfires across Scotland between 5pm and 10pm that night, while operations control received more than 800 calls.

The threat of attack is said to have played on the minds of many on the ground.

Mr McAffer added: “We were constant as soon as we came on duty until about midnight – and we were told what areas to avoid and where to wait for police back-up.

“It’s sad because you are basically treating every incident as if you will be attacked.

“One of the police officers was also injured – it’s just unacceptable.”

He spoke out as the Scottish Fire and Rescue Service launches its #DoNotAttackMe campaign, which condemns violence against firefighters.

The campaign comes ahead of the service’s busiest night of the year.

Firefighters based at the city’s Marionville Fire Station were called to respond to a massive bonfire engulfing five cars during Bonfire Night 2017.

They had to withdraw and call for police assistance after being harangued by a large group of youths – who filmed the firefighters.

Bonfire Night takes place on November 5 every year and dates back to a celebration of King James I’s survival of the Gunpowder Plot in 1605.

Dapper Prince Harry looks sharp in a tuxedo as he attends a black tie for England Rugby's programme
Incredible image show animal escaping the clutches of two hungry lionesses
Raab accused of quitting in bid to replace May with Gove and Mordaunt on the brink
Cult Danish skincare brand set to return to Boots
Michael Jackson’s empire is in financial freefall– but are family members using his children’s pain?
Jonty the donkey who was temporarily blinded in a freak accident is given special SUNGLASSES
Kanye West's Yeezy sneaker empire is worth $1BILLION according to Forbes cover story
Councils to use drones to spy on homes to makes sure they haven’t breached their planning permission