A simple five-minute iPad test could spot early signs of dementia and help doctors diagnose the memory-robbing disorder earlier than before.

The NHS is now trialling the exam, which tests the speed and accuracy of a person’s thinking by showing them pictures of animals.

People doing the ‘quick and easy’ test are shown 100 photos and have to decide whether or not there is an animal in the picture.

Some have obvious creatures, while others have hidden animals and half have no animals at all.

If people are slow to respond or incorrectly identify the animals it could be a sign their brain function is reduced – potentially signalling a dementia risk. 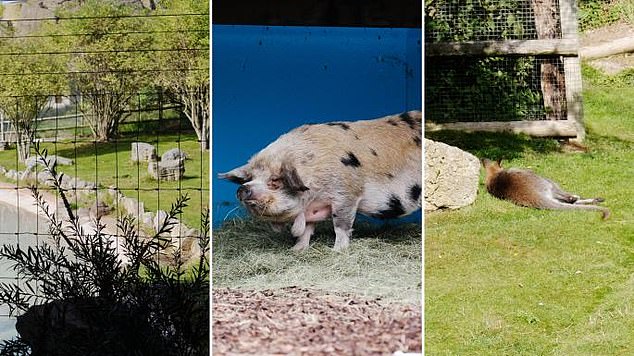 The test, which can be done at home in minutes, shows users a fast succession of pictures and requires them to indicate whether or not the image had an animal in it. In the sample pictured, the image on the left has no animal, while the other two have a pig and a marsupial in

The NHS trust for South London and Maudsley is trialling the online test, which was developed by international healthcare tech company Cognetivity.

Benefits of the test are that it can be done at home and may be able to spot signs of brain decline before any symptoms appear that a doctor may notice.

Many people aren’t diagnosed with the condition, which affects around 850,000 people in the UK, until its effects start to appear – by then it is often too late.

Common symptoms include memory problems, difficulty with understanding or communicating, and mood changes.

The Cognetivity test, named the Integrated Cognitive Assessment, tests visual processing to give a patient a score at the end based on their speed and accuracy.

In a test on 448 people, each photo was shown for 100milliseconds before the user had to categorise it as either animal or no-animal.

They indicated this by tapping the left or right of the screen, and were not required to count or identify the creatures. The test could also be done on a computer.

ALZHEIMER’S MAY AFFECT TWICE AS MANY AS BELIEVED

The number of people living with Alzheimer’s could be twice as high as scientists believe, an expert has claimed.

Dr Clifford Jack, an Alzheimer’s researcher at the Mayo Clinic in Minnesota, said many sufferers have early, symptomless signs of the disease.

Doctors currently only diagnose patients with Alzheimer’s when they show physical signs of the memory-robbing disorder.

But Dr Jack and colleagues found in a study of 2,500 people that twice as many had biological signs of the brain disease than were showing symptoms.

Dr Jack told The Telegraph this month: ‘The prevalence of Alzheimer’s disease are all based on… the question “do you have dementia?”‘

He said: ‘Classically defined Alzheimer’s undercounts people who have the pathology but do not have symptoms.

Carol Routledge, director of research at Alzheimer’s Research UK, told The Sunday Times: ‘This test, which is at the early stages of development, has the potential to help detect disease before memory and thinking problems have impacted people’s lives.

‘And it’s encouraging to see this technology enter into trials that assess its potential.

‘Sensitive AI techniques provide huge opportunity to improve how we detect the diseases that cause dementia, ensuring an accurate diagnosis for everyone at a time that’s right for them.’

But Ms Routledge added the test would need extensive testing before it can be used widely.

Next month, NHS trials are expected to expand into north London, Sussex and Devon – it could be used nationwide as soon as next year.

A study of the effectiveness of the test suggested existing tests could be affected by how clever someone is and whether they’ve done them before.

But the iPad exam could not be fooled in the same way – regular testing on young, intelligent people showed they did not improve their score when they did it every other day for two weeks.

Everyone in the study was over the age of 18 and didn’t have any physical or vision problems which would interfere with their ability to complete the task.

The spot-the-animal test could be used to find signs of mild cognitive impairment (MCI), which is when a person’s brain doesn’t function as well as it should.

MCI is often a precursor to dementia and is hard to spot because it’s not severe enough to interfere with someone’s life or cause noticeable problems.

At the end of the test people were given a score between 0 and 100 which could be compared against other, standard, pen-and-paper tests already used by doctors.

People who return a concerning result on the test may be asked to do it again to check they weren’t distracted or tired, or they could be referred to a doctor.

Developer Sina Habibi, chief executive of Cognetivity, said: ‘Every image is different from the others in terms of its complexity and level of surprise.’

A study of the test’s effectiveness was published in the journal Scientific Reports.

Heartwarming moment a woman, 29, surprises her grandparents with a new home in Hawaii
AP PHOTOS: A selection of pictures from the past week
Adele reveals she 'got drunk with the Spice Girls' at their final reunion show at Wembley
Waleed Aly explains why he believes Mark Knight's cartoon was branded racist
Mother with J cup breasts says they have left her housebound
German village could become EU's geographic midpoint post-Brexit
Desert Island Discs is named best radio show of all time
Winx is headed for a record fourth consecutive Cox Plate victory as rumours of retirement swirl